Buckle up for a Trip to Lohi’s Bungalow Bar

It’s usually the work of children that can transform a backyard into the likes of the deep sea, majestic jungle or the snow caps of Switzerland. This same creativity was cultivated by one of Denver’s profound restaurant groups — The Culinary Creative — when it reimagined the side yard next to Bar Dough on 32nd Ave in the LoHi neighborhood, thereby bringing us Bungalow.

A trip to the Mediterranean coast is found in Bar Dough’s refined take on Italian cuisine. Next door is an ode to America at Highland Tap and Burger. The simplistic design of Uncle allows the complexity of ramen and Asian cuisine to take center stage. However, at Bungalow, this traveler’s delight is an open-air bar that welcomes the brightness expected at a getaway to Tulum.

Bungalow’s archway allows attendees to shed the typical Denver aesthetic of the mountains and feel the heatwave of the tropics set in quickly. From the blue of the couch cushions and the pops of magenta and orange, the only thing missing is the sound of the tide rolling in. 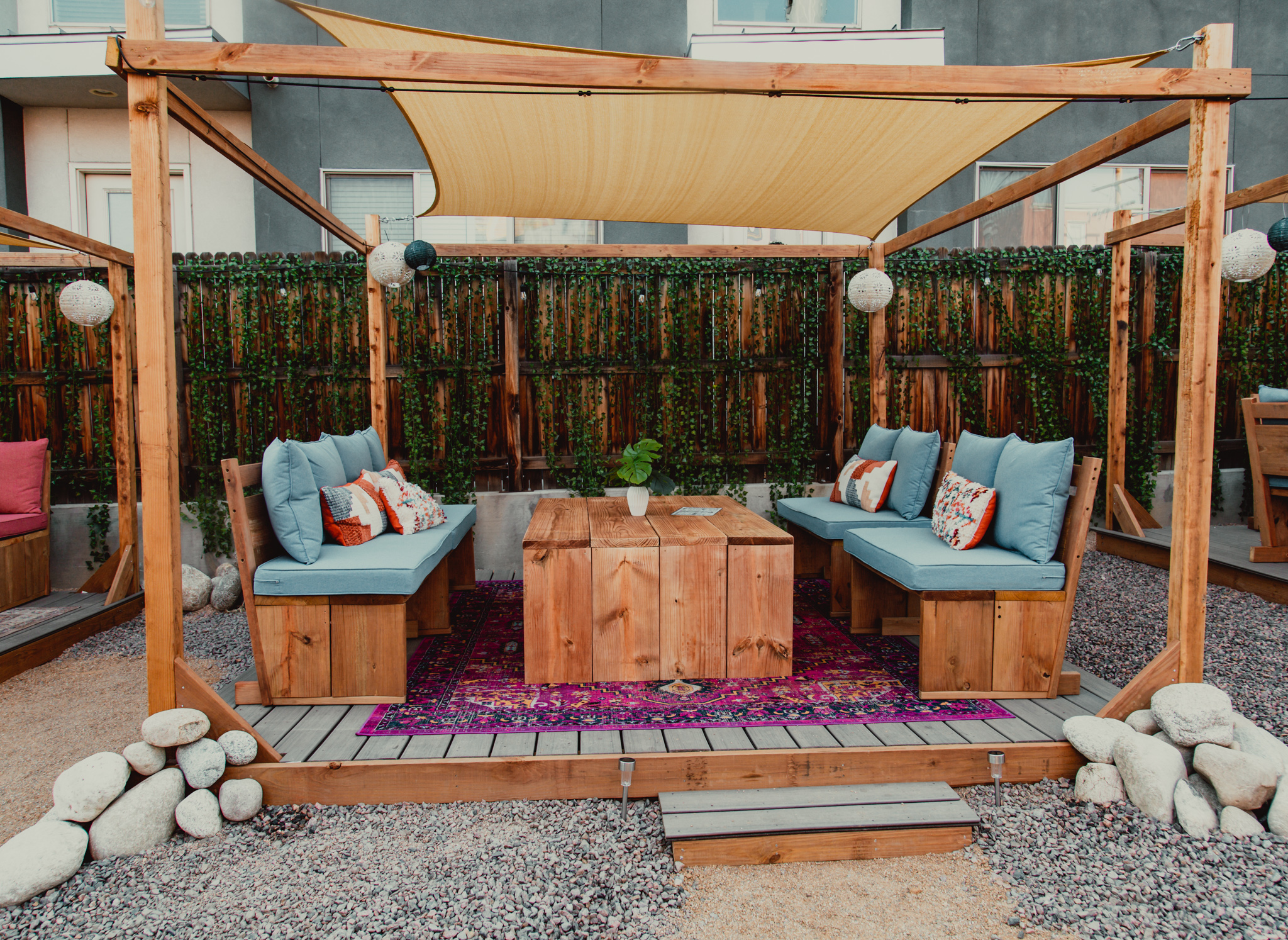 The lively atmosphere is amplified by the drinks. Newcomers see pitchers arrive in a variety of sun vessels at each table. The Bucket O’ Paloma ($40) combines bottles of Fever Tree Grapefruit Soda and a small Espolon Blanco bottle in a retro cooler. Each soda bottle has the much-needed salted rim. Thus bottle off the bottle cap, taking a slight swing adds room for a personal preference pour of tequila.

For those that want to continue with tequila, they serve drinks beyond a margarita. The F.B.T’s ($40) ruby flows from a spigot at the bottom of its tall narrow jar. A mix of watermelon and hibiscus agua fresca join for the radiant color. The hibiscus pops with a tartness similar to a pomegranate. 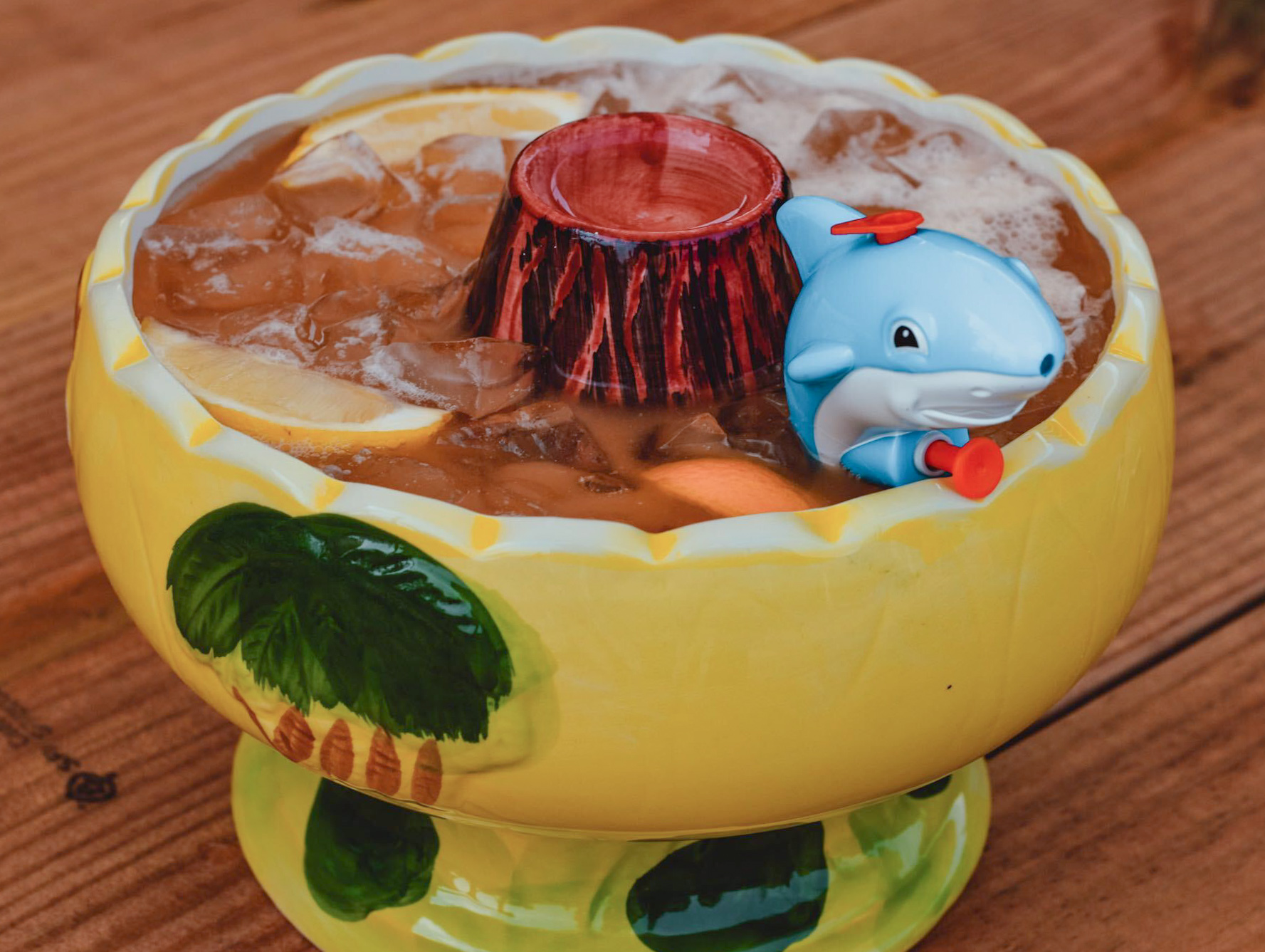 Juan Said it Was O.K. drink. Photo courtesy of Bungalow.

No island escape can exist without a rum-laden drink ⁠— it’s almost a right of passage. Thus, the Juan Said it Was O.K. ($40) is an ode to a piñacoloda. Rather than a heavy smoothie, this on-the-rocks preparation allows for the shark floater to happily sail around the punch bowl. The sharable punch bowl’s piet de resistance is the inner stand that holds a flame-like, mini tiki torch. With numerous straws extending at all angles, it’s a beachy version of gathering around a Colorado campfire.

As for food, the menu remains small as the cocktail bar wants to highlight its beverage program overall. They trade in the crunch of spiced nuts for a crisp chip dipped in a refreshing salsa ($7). With one hand holding drinks, it’s easy for the other to hold their empanadas ($13). Each layer flakes like filo dough and reveals the smoky chicken filling. The side of crema might seem cooling, but it has a layer of spice as does a spicy mayo. 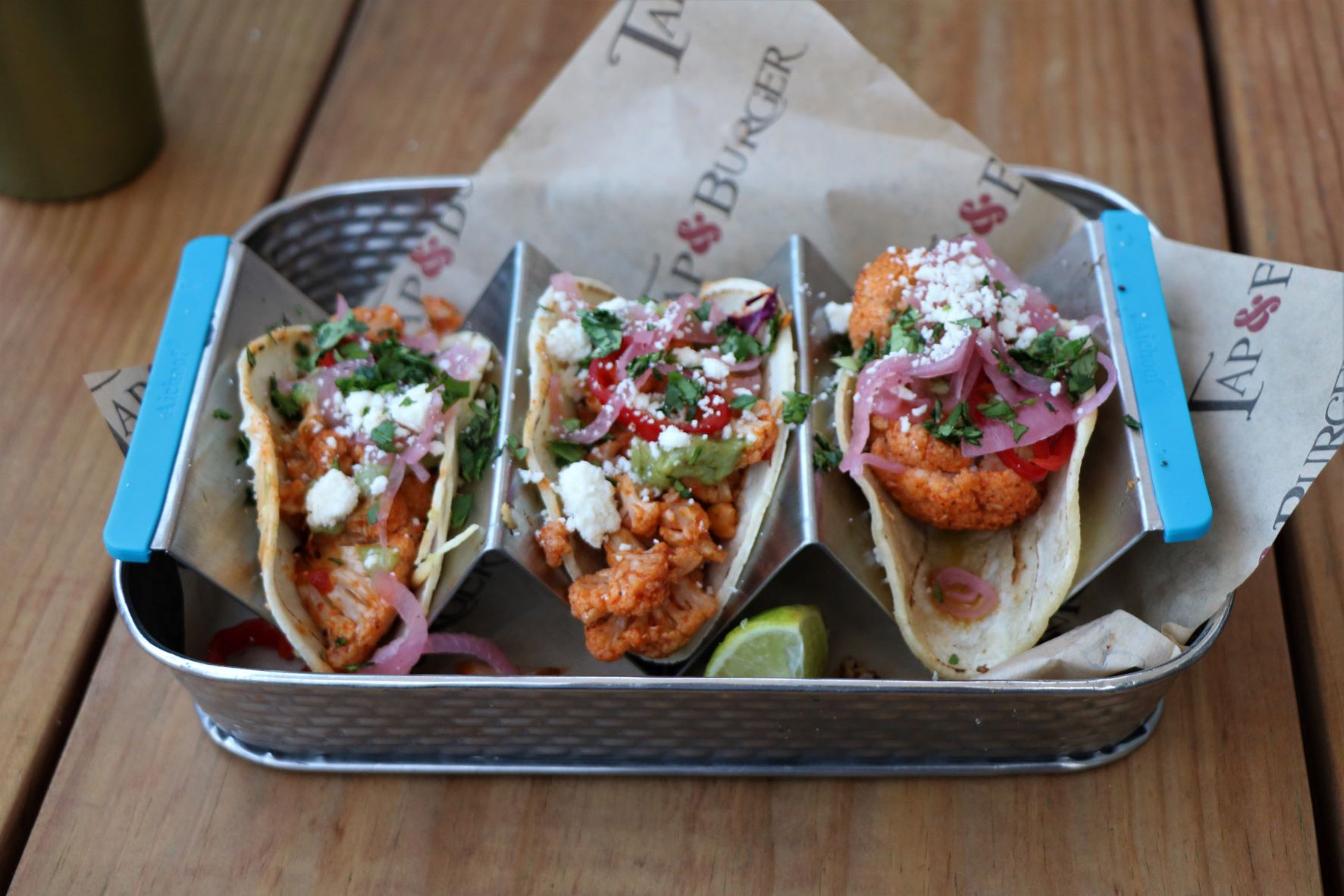 The fiesta continues with their spread of tacos. The cauliflower ($12) has an orange hue that parallels it to the preparation for al pastor especially with the chunks of pineapple scattered about. To offset the sweetness, pickled onions add the dimension of sourness. The herbaceous chimichurri sauce from the empanadas returns to brighten the chicken tacos. Their take on pulled pork ($15) comes with fried jalapeños ⁠— a unique preparation for incorporating subtle heat.

Instead of glass or bottle ordering with wine, drinks come by the glass or by the carafe. They also offer bottle service showcasing an expansive array of tequila ($120-400) with supplemental vodka ($100-$140) and whiskey ($120-150).

After spending an afternoon or evening cozied up in a cabana, it’s hard to return to the real world waiting outside. But even as the summer months pass, Bungalow plans to extend the season.