Review – The Hella Mega Tour Was A Helluva Time

“We’re still alive,” the words from Billie Joe Armstrong reverberated throughout Dick’s Sporting Goods Park, hanging over the fanfare, like fog in the night sky. The cheers of tens of thousands of attendees collectively exhaling a year of delay and rejoicing in a long-awaited return greeted his words with no shortage of enthusiasm. Though the times have felt increasingly unstable nowadays, Armstong’s words felt like a reprieve, one that he allowed us to keep, at least for the night. As he repeated it, time after time, letting it sink in, the weight of his words growing heavier and heavier. The good ole rock show was nothing to take for granted anymore, it was the gift of a moment — the time of our lives, or perhaps a singular time of our lives, but that in and of itself was worth celebrating. On the “Hella Mega Tour,” the mere fact that we were together and alive, was a celebration, Green Day, Fall Out Boy and Weezer, the mainstays of the Hella Mega Tour were the icing on the cake. 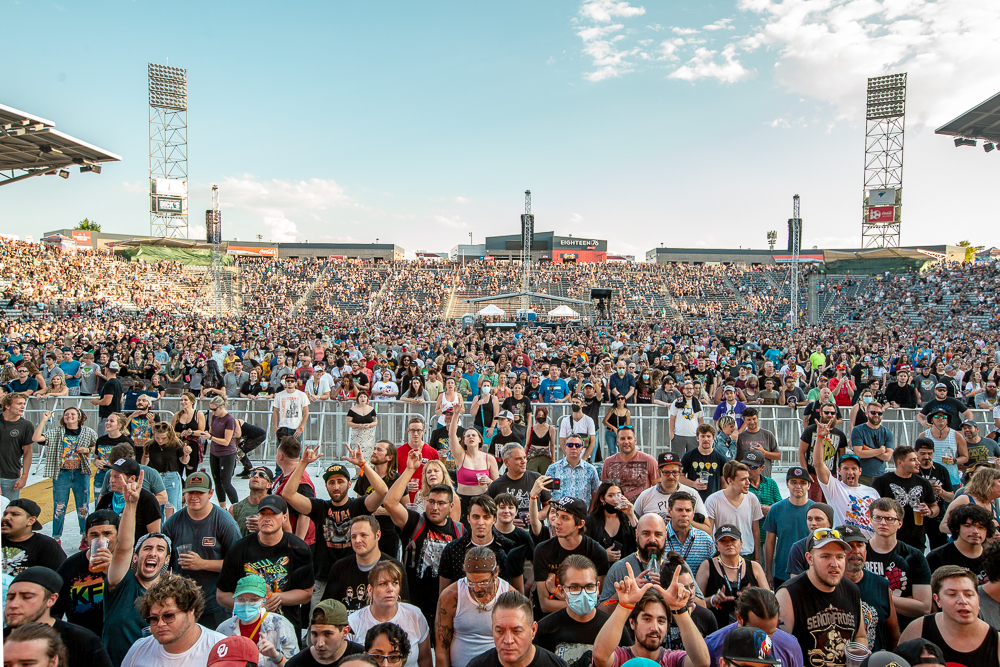 Long prior to Green Day taking the stage, cars swarmed upon Dick’s Sporting Goods Park congesting roadways and blocking traffic lights in a chaotic blitz to catch this summer’s biggest rock concert. The sold-out crowd descended in droves, many clocking out of work early and hustling through the rush hour thoroughfare to make it to Commerce City for the main attraction. The Interrupters laid a ska and punk soundtrack as people flocked through concessions and into their seats. For many people, this performance was the biggest event they’d been to since the pandemic began, and it cannot be understated how momentous the occasion felt. Everything had a novelty to it — a freshness as if it were the first time. So, when Weezer followed The interrupters, entering the stadium to Van Halen’s “Jump,” the crowd was off the wall, knowing full well the kitschiness and indulging in it full stop. 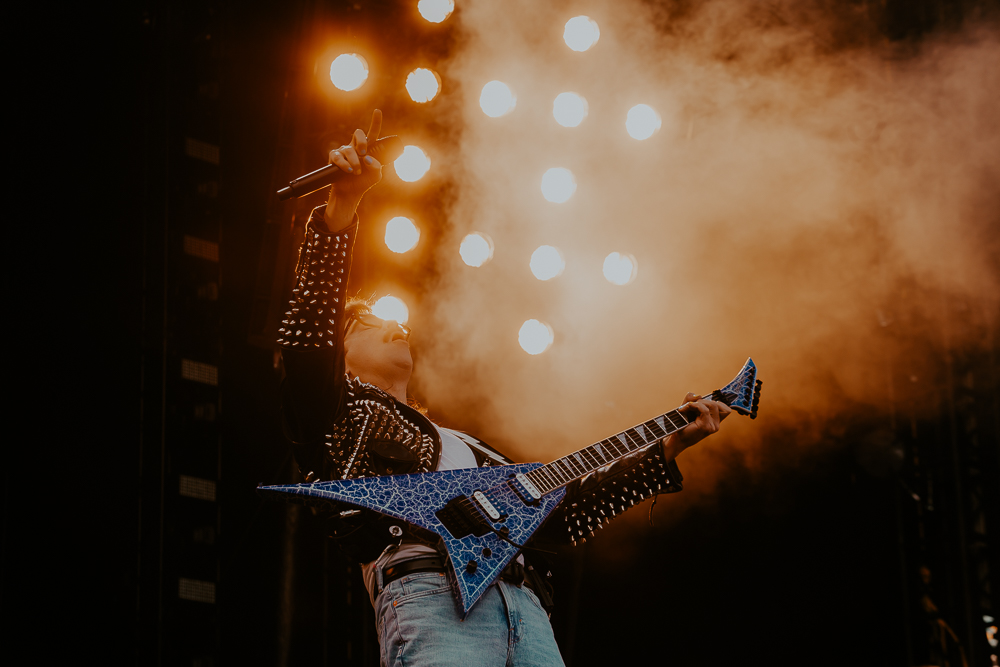 Weezer, the nerdy and oft-kitsch connoisseurs, didn’t shy away from their tell-tale schtick, laying it on thick as the crowd cheered them on. With Rivers Cuomo sporting a proud mullet, Weezer dug through their discography making sure to remind the crowd of their storied legacy as pioneers in the alt-rock pantheon. “Beverly Hills” to “Undone – Sweater Song” jettisoned through the stadium atop thousands of singing voices. For their part, Weezer, galavanting through their cotton candy stage set up (complete with six bass drums spelling out their name) felt like unlikely stadium rockers, who took the assignment to the head, acing the uniquely awkward bravado and energy needed to set the show off on the right page. Slipping between a multitude of songs from a career-spanning setlist, Weezer was goofy, conversational and extremely tight as a unit, making for an effortlessly light-hearted welcome to what must’ve been an uneasy foray back into the “real world” for no shortage of fans. Everyone can agree that life, in general, has been tougher than anticipated in the last year and a half or so, but the minute Weezer hopped on the stage they made sure Dick’s Sporting Goods Park became a place where seriousness had no place — it was simply a time to let your hair down, and sing songs like “Say It’s So” at the top of one’s lungs. 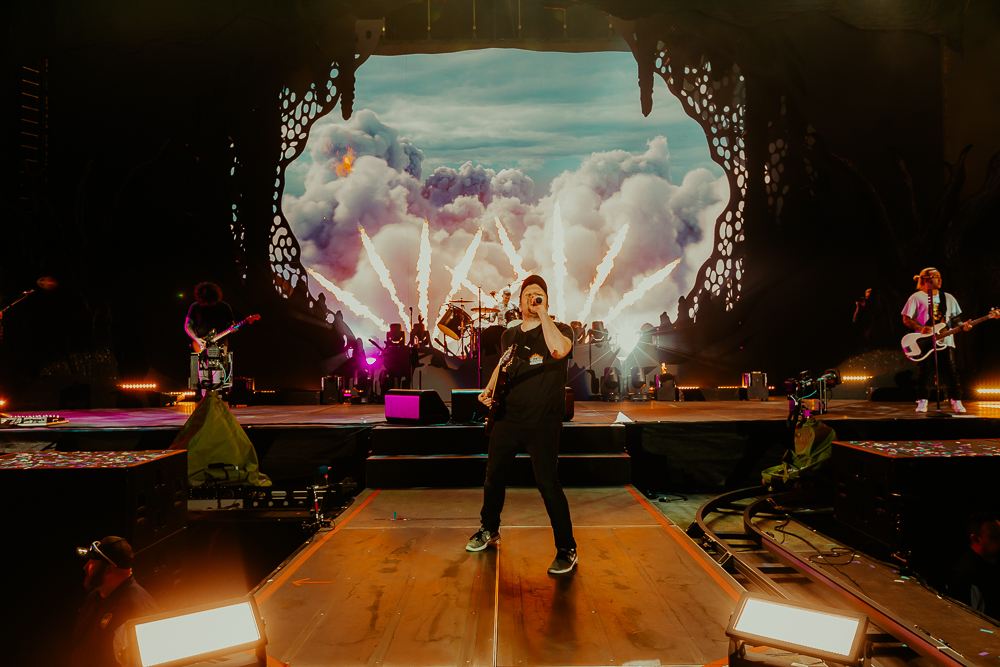 Following Weezer and their early aughts nostalgia, Fall Out Boy, complete with a dramatic set changeover into an obscure forest of sorts, came out of the gate with a nostalgic foray of their own. Arriving on stage to “The Phoenix” amid spouting pyrotechnics, Fall Out Boy went into full “save rock n’ roll” mode. The bravado and rock star machismo weren’t without its merit, as old-school Fall Out Boy fans delighted in the huge anthemic moments they grew up on, to the tune of “Sugar We’re Goin’ Down” and “Thnks fr th Mmrs” and the newer fans of hits like “Uma Thurman” and “Centuries” brushed shoulders and cherry-picked the moments that were the band’s “definitive claim to fame.” Regardless of when someone had jumped aboard the Fall Out Boy train in life, the band came prepared to light a fire for everyone, literally. Between Pete Wentz’s flamethrower bass guitar, and Patrick Stumps’ voice acting as lighter fluid as it soared above his inflamed piano, to the momentous (albeit on the nose) performance of “My Songs Know What You Did in the Dark (Light Em Up),” Fall Out Boy made for a fireball performance that added an exclamation point to the illustrious and oft-overlooked career. Not only that but Fall Out Boy surprised the masses sounding even better and more energized than their records would lead you to believe, courtesy of Stump’s immaculate vocals and the band’s no holds barred musicianship. 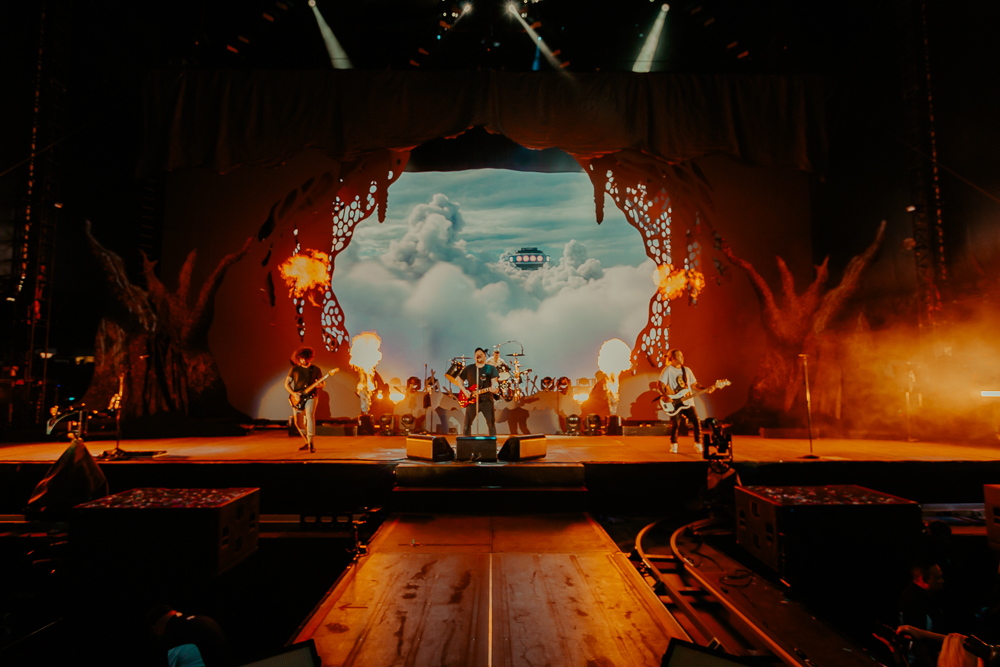 After a quick changeover, and a rousing spectacle that was Queen’s “Bohemian Rapsody” blaring through the stadium’s PA, a man in a raggedy pink bunny costume, set the tone for Green Day to take the stage by running around to “Blitzkrieg Bop.” Beaming up toward the crowd, the iconic faces of the legendary pop-punk band greeted the crowd with an absolutely electrifying version of “American Idiot.” Within the current climate of the world, amidst a pandemic filled with misinformation and coming off a less than favorable president, “American Idiot” was an equally chilling way to kick off the show, but necessarily so — it was a quintessential Green Day move if there ever was one, and it couldn’t have come with more apt timing. 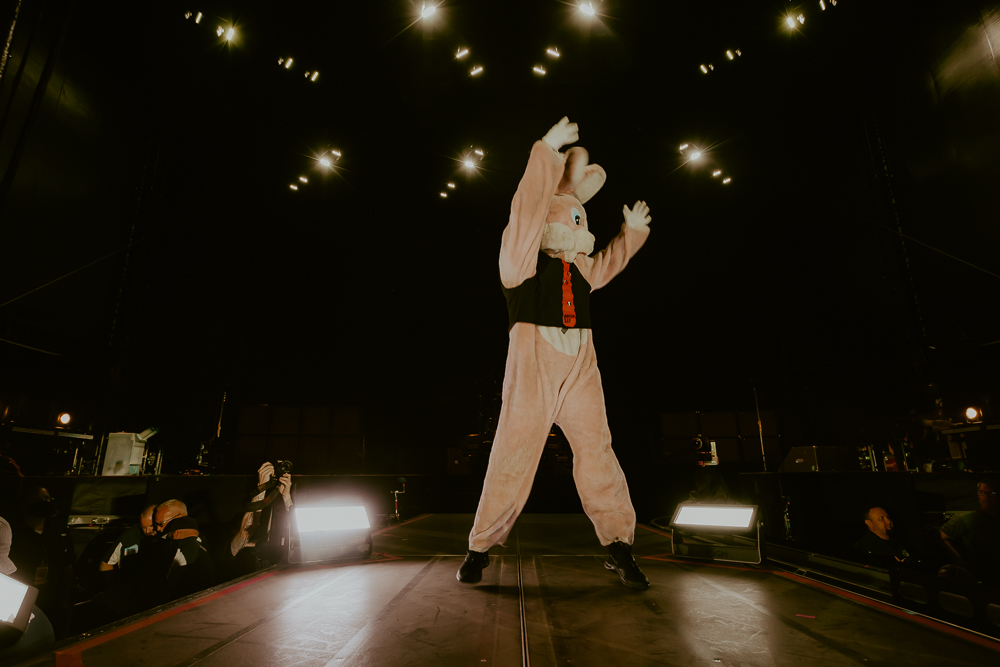 Bounding from “American Idiot” into “Holiday,” Armstrong, had a message for the crowd, saying, “get off your phones, we’ve spent a year and a half of this pandemic on our phones, but we’re finally here and we’re still alive.” As soon as the words left his mouth, the riotous music took over and we were off to the races appreciating the time for what it was, knowing now how fleeting it can be.

Green Day served up a power chord upper body pump of a career-spanning performance. Armstong, ever the charismatic lead singer, proved time and time again why he is one of the most revered frontmen of all time, providing an adrenaline boost through the band’s lengthy discography. From “Brain Stew” to their newest single, “Pollyanna,” Green Day kept their foot on the gas and maintained a grip over the audience that showed no sign of letting up. The crowd would move from scrapping the sky, jumping so high to “Know Your Enemy,” to manifesting a sea of lights to light the way for “Boulevard of Broken Dreams,” and belting at the top of their lungs in rapid succession. The band even covered Operation Ivy’s “Knowledge” bringing up a 17-year-old guitarist to the stage to shred with them, and to crowd surf on the waves of the audience’s boundless energy. 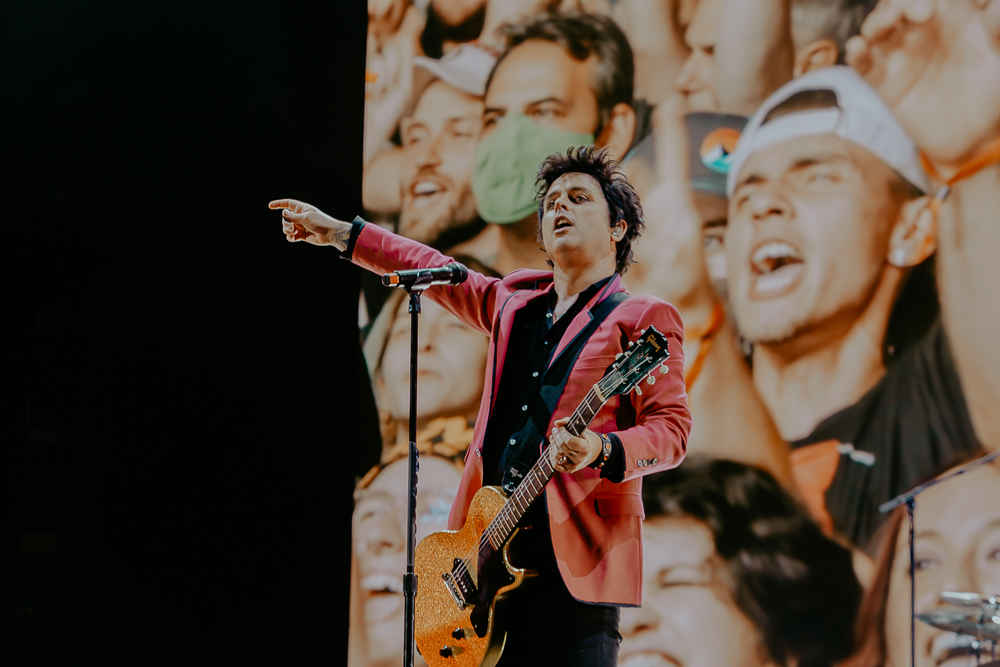 Through their explosive performance, Armstong’s words served as a strong reminder that the present was all we had promised to us, and to live it to the fullest. Each time he said it, it grew more powerful to the point where it became a rallying cry for us — the lucky ones. After two years of planning and a year and a half delay, the “Hella Mega Tour” managed to be bigger than was ever intended.  While it was an opportunity to see three of the biggest bands of the last three decades, “Hella Mega Tour,” was, more importantly, a chance to connect with tens of thousands of strangers, as we used to, now knowing that times like these are a luxury. Hell, even being alive is a luxury, and that’s a hella mega good reason to celebrate, and on Wednesday night, there was no better place to do so.