Littleton’s Dirt Coffee Serves the Community for a Cause

Dirt Coffee on South Rapp Street in Littleton sits in a one-story brick house with a welcome sign out front and plenty of places to sit and enjoy a cup of joe. The WiFi, should you need it, is a clever conversation starter, educating customers that 90% of people with autism remain underemployed or unemployed. Dirt Coffee works daily to change that statistic.

According to Autism Speaks and based on reporting by the CDC in 2020, approximately one in 54 children is diagnosed with an autism spectrum disorder. While autism is no longer considered a singular diagnosis but rather a wide spectrum of behaviors and/or disabilities (thankfully becoming more widely accepted and even celebrated each day), the stigma surrounding autism is a hard one to kick — kind of like the need for caffeine. 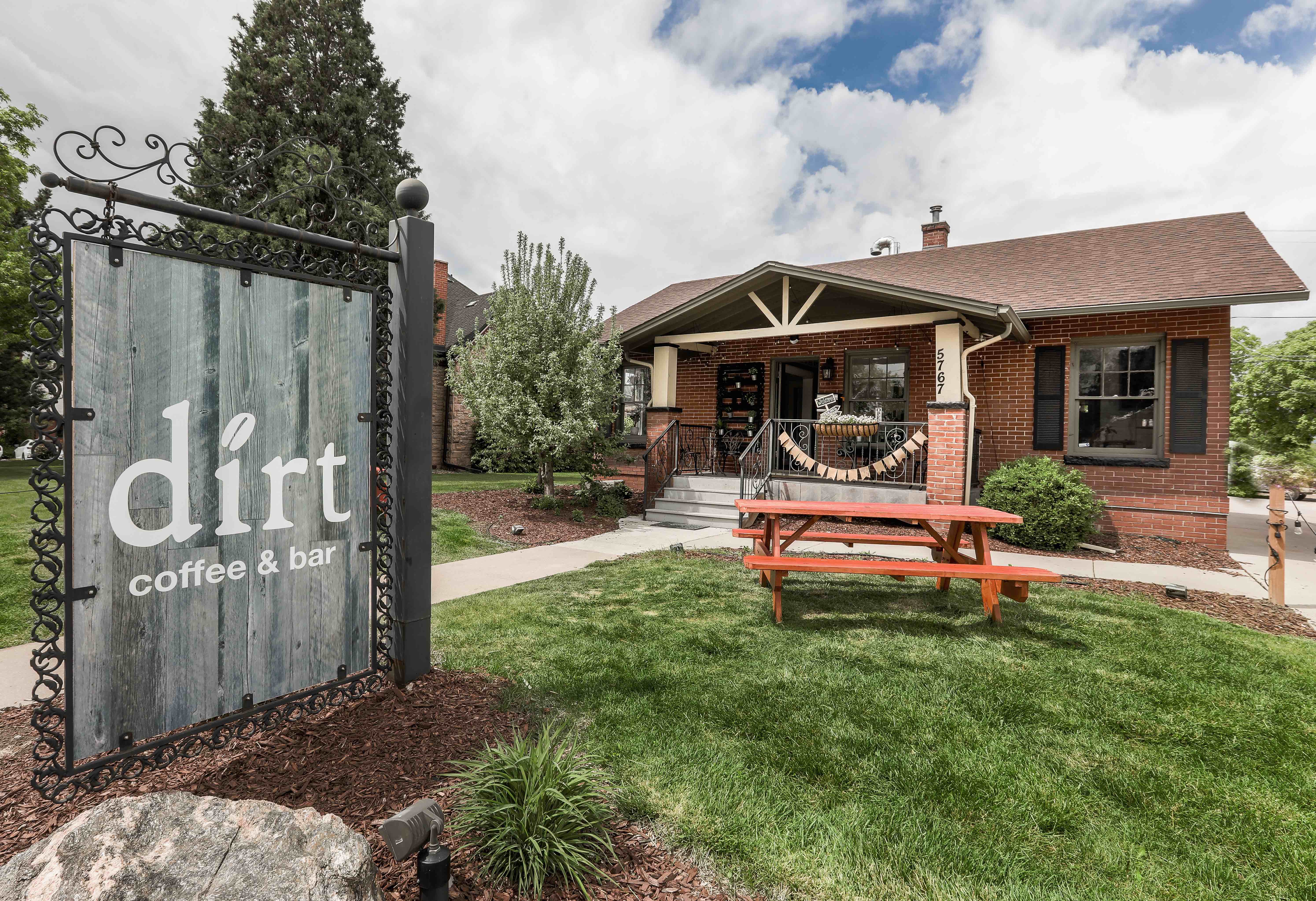 About 8-10 years ago, the concept of what would become Dirt Coffee was born. “[Founder Lauren Burgess] had been working with a day program for people with autism. There was a lot of job coaching involved but she noticed people weren’t being placed in jobs afterwards,” said Dirt Coffee’s newly appointed executive director Catharina Hughey. “She had this idea, ‘Why don’t we create employment that offers space for people with autism?’” Burgess then began a grassroots campaign of crowd-funding to secure a brick-and-mortar spot for Dirt Coffee. But that space didn’t arrive as quickly as anticipated.

Instead, Dirt Coffee arrived – literally – as a repurposed vehicle, taking Dirt’s mission on the road. “It was kind of a blessing in disguise because they ended up with the truck,” said Hughey, referencing the converted van with two large service windows and the Dirt logo affixed to the side. “The truck is this great idea that you’re able to do advocacy and education on the road and also offer employment at the same time.” As Burgess and her team roamed the greater Denver area serving coffee and educating consumers, the Dirt’s following really grew. 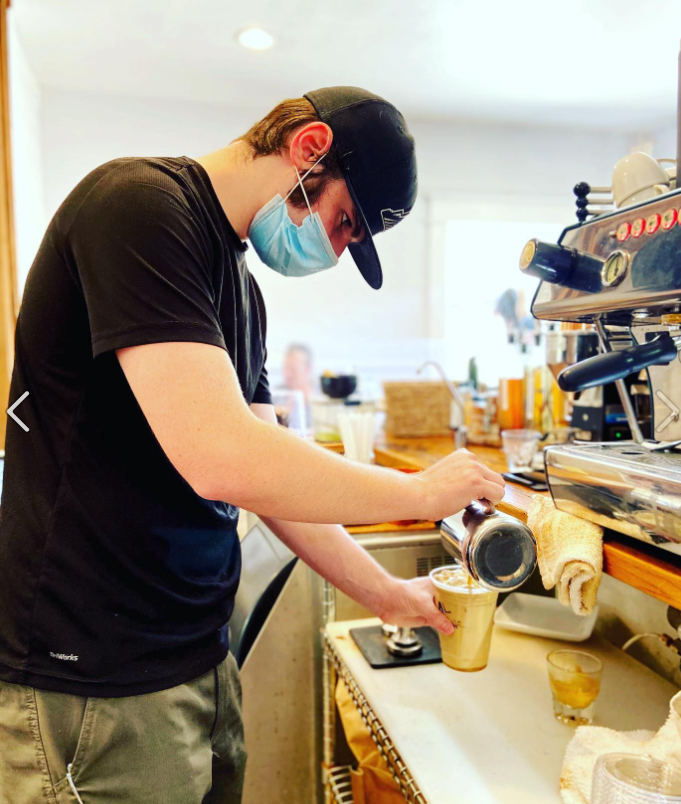 One of Dirt Coffee’s interns behind the espresso bar

Dirt Coffee’s mission isn’t just to offer a few autism-related statistics while you sip your coffee (though the staff happily will); there is much grander work going on behind the scenes. The Dirt staff is constantly educating its customers about autism, how it affects communities, and how the world generally needs to do better to accommodate people with autism. But within the walls of the coffee shop, the team also walks the walk, thriving on an employment system designed to successfully hire, train and support neurodivergent people.

One of the stepping stones for this employment program focuses on the traditional hiring process, especially the parts that don’t work for everyone. “In the post-pandemic era, we keep hearing that there’s a labor shortage,” said Hughey. “But I think it’s a catalyst for considering ‘How are we hiring? How many underrepresented people have been marginalized and looked past using the traditional hiring method that we have?’” Hughey pointed out that simple things, such as maintaining eye contact and other body language, can be difficult or uncomfortable for neurodivergent people. “But that doesn’t take away from the unique and valuable skill set that they bring.” 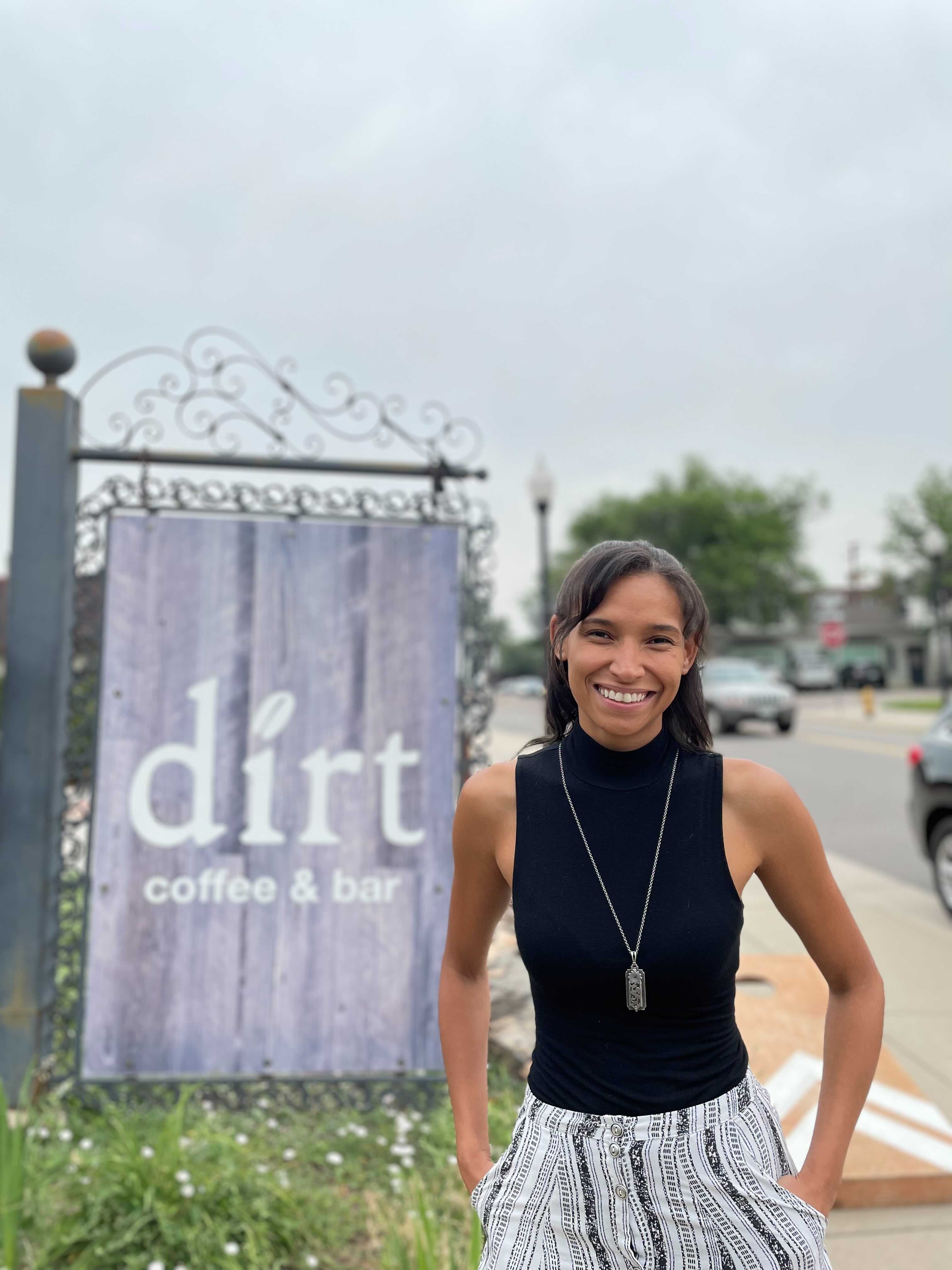 In addition to deciphering traditional hiring methods, Dirt has a comprehensive internship program for young, neurodivergent people, which consists of quarterly cohorts that teach interns various aspects of employment. In the first month, interns work with job coaches and focus on soft job skills, like punctuality, clocking in and decoding what the word “professionalism” really means to employers. For the second month, interns hop behind the bar to start barista training, from back of house to front and all the necessary positions in-between. In the third month, interns officially move into their roles and scheduled shifts, working alongside baristas who are also job coaches. Once the internship officially concludes, interns can choose to stay and work one-on-one with Dirt’s job coaches on individual goals and finding job placement. “The job skills have to be applicable to other places,” said Hughey. “Overall, the core of our lessons and skillbuilding is that you should be able to take what you’ve learned here and use it elsewhere.”

Another huge aspect of Dirt’s mission is consulting other businesses on how they, too, can be more inclusive of the neurodivergent community. “It’s really important that what we’re doing here has an additional impact, not only to bringing in interns and giving them the opportunity to earn a living while getting training, but also that we want to model for other businesses what it looks like to have intentional hiring,” explained Hughey, pointing out how businesses can make simple but impactful changes to dismantle “systems that have oppression built into them.” 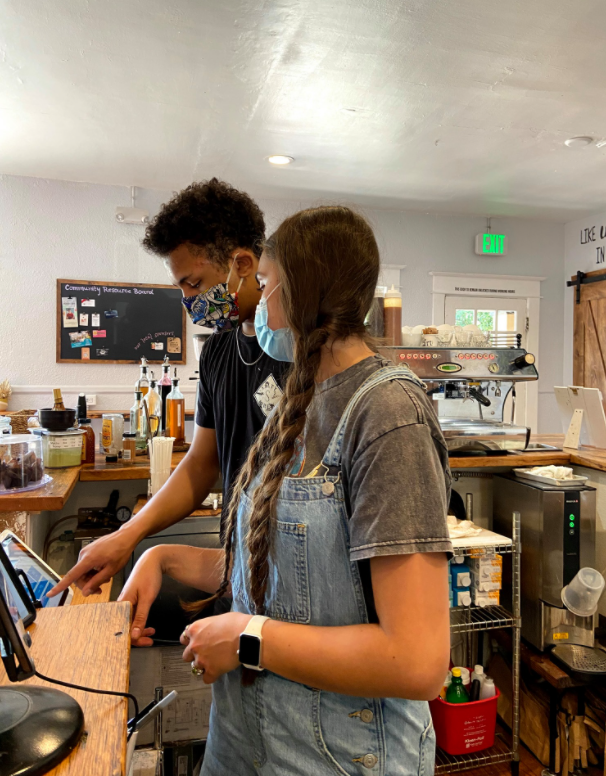 Hughey noted that for many businesses, it’s not a matter of why they’re not intentionally changing how their processes work but rather them not realizing there is an issue in the first place. “It’s more that people haven’t been exposed to it or asked to do it. But then the next question might be, ‘How do we go about that?’ ‘How do we change our hiring practices?’”

Dirt works with businesses to evaluate their current practices and then make recommendations based on how they can improve. This could look like making simple language changes or bringing in speakers and job coaches to work more thoroughly with the business. “Another tier is where I go in to talk to the stakeholders about the bottom line revenue for businesses that this practice works and it works well. And it’s not something you have to spend a ton of money on, it’s really just changing simple things. When you have that amazing person coming through the door, you give them a second look, even if they don’t fit into the box that we’ve created in our world,” said Hughey. 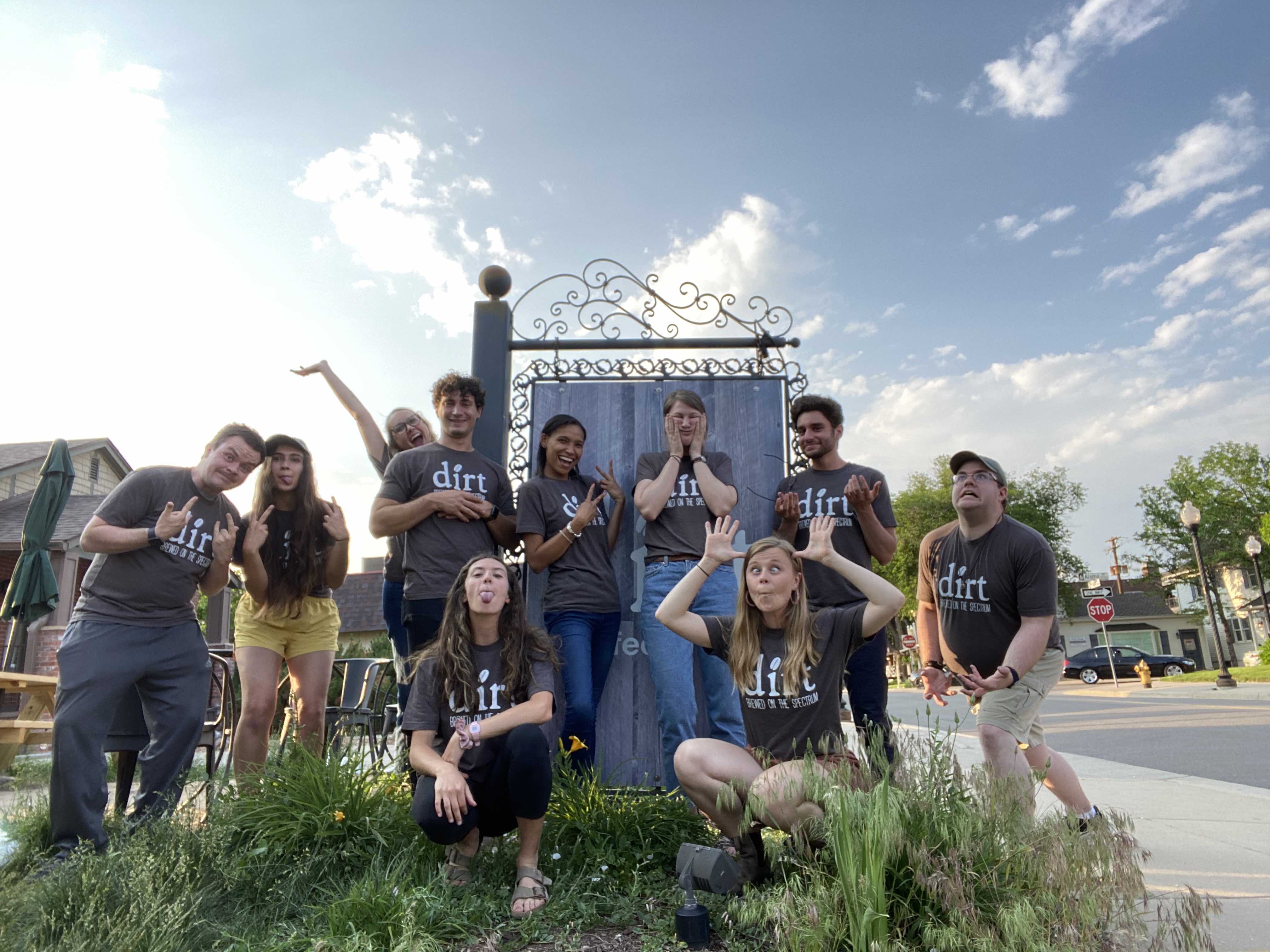 All in all, Dirt Coffee is doing a lot — and doing it well. Plus, a second location is currently in the works, expanding the coffee shop’s reach more broadly across the city. “We’re thinking about being in a location where we can meet more people where they’re at. A lot of our demographic can come from very different socioeconomic backgrounds — the ones that maybe need more of our support won’t always be readily available to come all the way [to Littleton].”

Wherever the second location lands, it’s sure to have a major impact just as the first one has, benefitting Denver’s neurodivergent community and opening the eyes of businesses that can do more to support it. “There’s the sustainability, the hiring and business modeling, and there’s changing people’s lives who come in here and do this and find jobs after this and feel more confident,” says Hughey. “People want to show up and be included.”

Dirt Coffee is located at 5767 S Rapp St in Littleton and is open daily from 7 a.m. to 6 p.m.. For more information, including the Dirt Coffee truck location and events, please call 303-635-6674 or visit the website.

All photography provided by Dirt Coffee.