Photo by Syed Hashemi via Unsplash

Ellie SullumAugust 20, 2021Lifestyle + Culture
Home
303 Magazine
9 min read
Every 10 years, mapmakers in Colorado redraw congressional districts. This year, Colorado’s congressional mapmakers initially gathered with the goal of avoiding partisan bias in their maps. The maps are intended to both adequately represent Colorado voters and create more competition in elections.
This year, the state gains an 8th Congressional district, since Colorado’s population grew an estimated 740,000 residents in the last ten years. In 2018, Colorado voters approved Amendments Y and Z. This created a third-party Independent Congressional Redistricting Commission to oversee the creation of congressional and state legislative maps. The commission has the opportunity to draw maps that are reflective of the state’s political landscape. Colorado is the first state to implement an independent system; the independent commission garnered national attention.
On June 23, Colorado’s Independent Congressional Redistricting Commission released a preliminary Congressional map, including a mock-up of the new district. According to this first map, the 8th district could be seated in the North Denver Metro area. 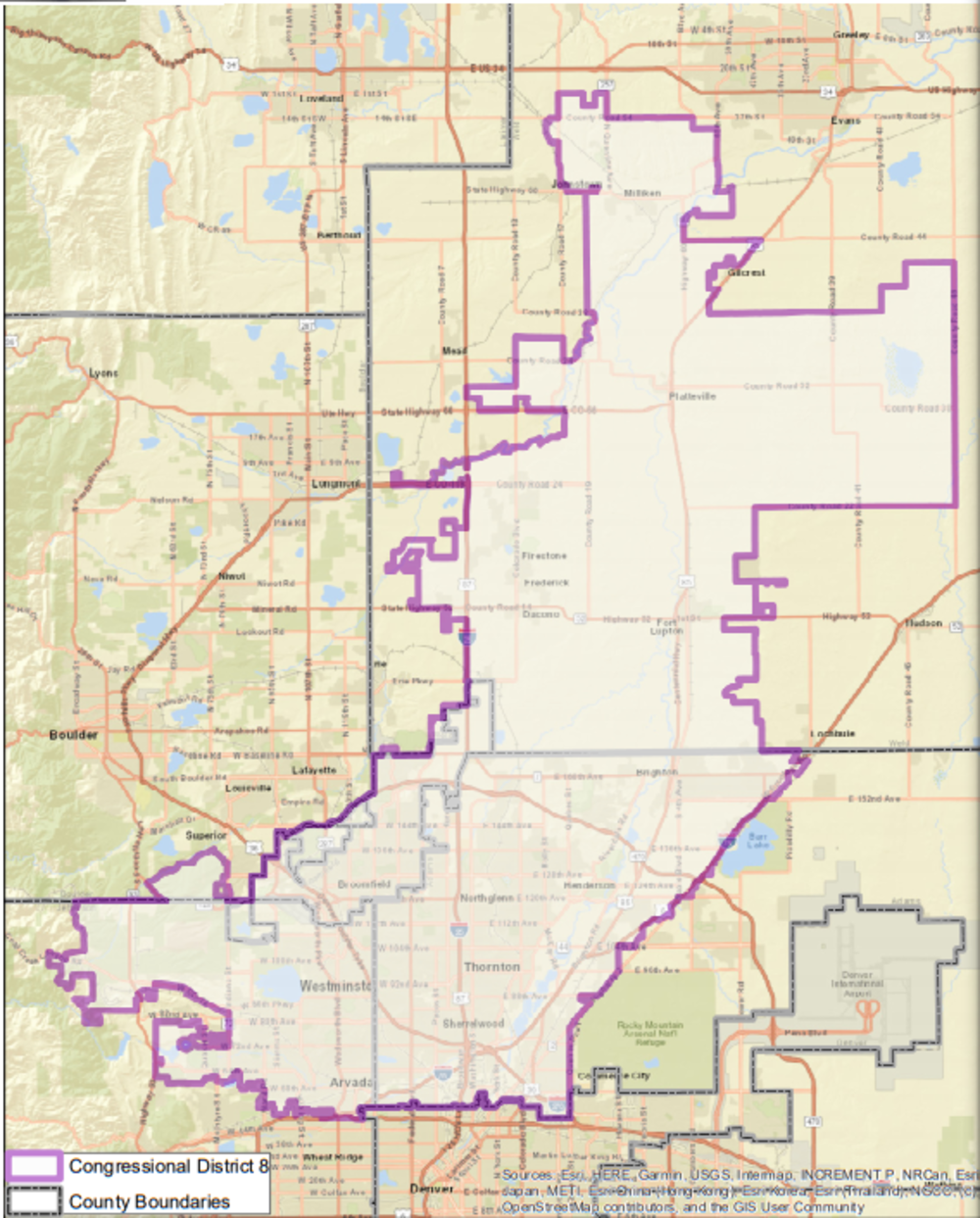 Due to the massive population influx within the Front Range Urban Corridor, the Commission chose some of the fastest-growing communities to be part of the new congressional district. The Front Range Urban Corridor comprises 17 counties. It accounts for 85% of the state’s population.
Right now, Colorado’s newest Congressional district is drawn in North Denver Metro (though does not actually include Denver proper). The district includes larger cities such as Arvada, Broomfield, Commerce City, Thornton, Westminster and other towns in the region. Political experts claim the district favors Democrats. Notably, the 8th District pulls Democrat-leaning areas from District 7. The once purple district would now lean Republican.
The 8th District preliminary map received a lot of attention – both positive and negative. Regarding the regional placement of the district, many voters and experts agree the new district should exist within North Denver Metro. The district would account for portions of five different counties. Cities and towns in the district share a handful of common industries, demographics and communities of interest.

Voters and political leaders alike expressed concern with the exact boundaries of the district. Some towns and cities will be split into multiple districts, such as Arvada in Jefferson County. The new map splits Arvada between districts 7 and 8, causing tension among residents.
“Arvada is Colorado’s 7th largest city, and over the past 20 years has become a real leader in the metro area in addressing regional issues. Keeping all of Arvada within one Congressional district is an important priority that will benefit Arvada and our regional neighbors,” said Ken Fellman, Arvada resident and former Arvada City Council member during a public hearing.
Others are frustrated with the political implications of the proposed 8th district. According to the current design, the map wouldn’t encourage much competition in either District 8 or District 7, where it pulls territory from. Overall, the preliminary map only creates competition in one district. However, the map is just a first draft. The commission plans to take public comment and more detailed Census block-data into account during the next round of map drawing.

Why Colorado Redistricting Is Under A Spotlight

The dynamics of the newest congressional district mock-up shed light on larger themes of fair representation among voters. For decades, large amounts of voters in Colorado expressed the need for fair political representation across communities of interest and political lines. In practice, this means voters from diverse constituencies want their votes to have equal weight. Additionally, voters from different political parties and unaffiliated voters want more competitive districts, instead of one party consistently dominating a district.
Colorado is the first state to implement an independent map-making process. People in Colorado and nationwide are paying attention to the impact of a third-party commission on redistricting in the state.
Mapmakers drew the first round of maps alongside a set of criteria. Some of the main goals include: Equal, or close to equal, population of 721,714 residents per district, keep whole communities of interest and counties, cities and towns together and create more politically competitive districts.
The first round of maps does not achieve any of these goals with a high success rate, but instead creates a blueprint to learn from.

Next Steps To Create A Final Map 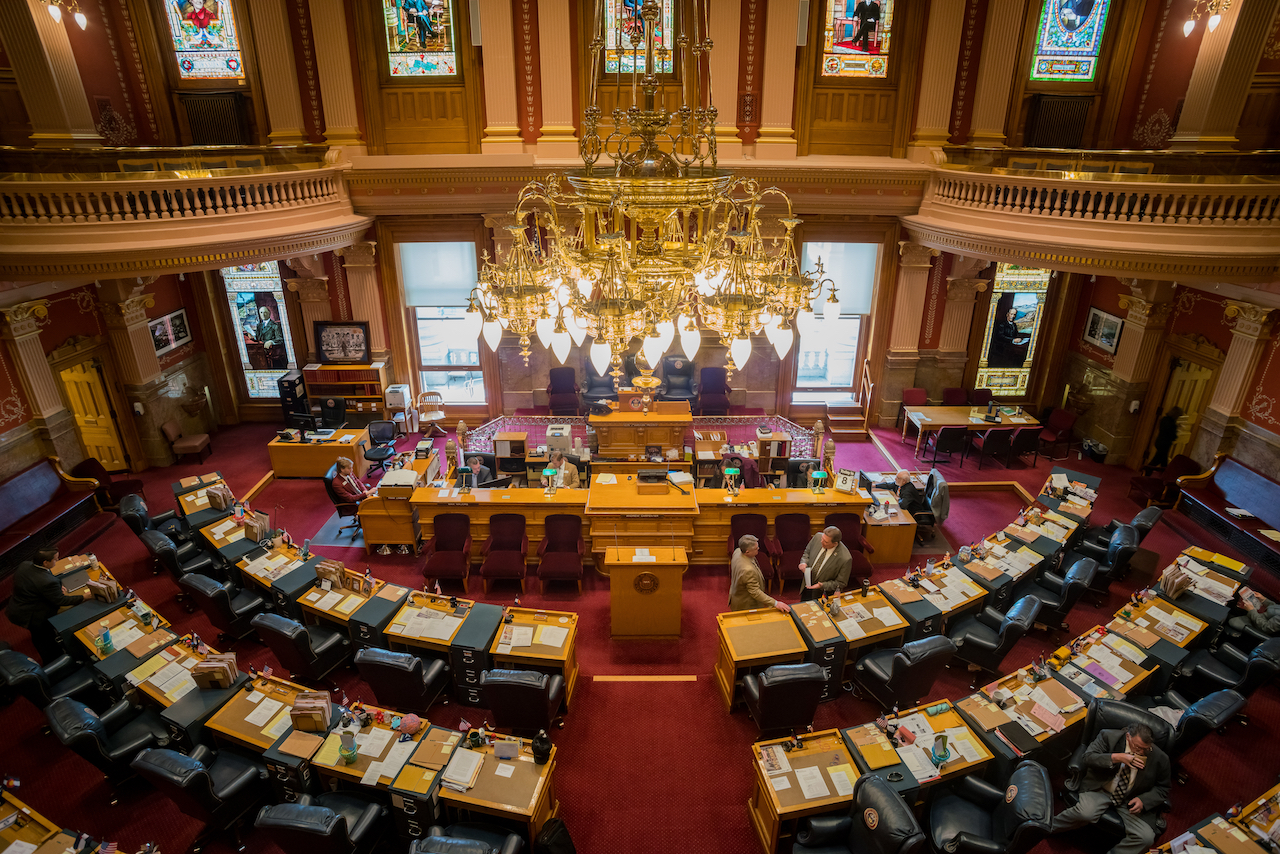 The Independent Congressional Redistricting Commission set up a summer series of public hearings. Public hearings give the commission information needed to draw a final map. The hearings began in July, and public comments are already giving the Commission strong insight.
“Colorado’s preliminary legislative maps mark another milestone toward a final map that reflects diverse communities throughout the state. Commission staff have acknowledged that the legislative maps will need a lot of work, therefore it is vital for the redistricting commissions to use these preliminary maps as a starting point to ensure communities of interest are appropriately prioritized in the final map,” said Dorado.
Regarding next steps, the commission will spend the Fall taking public comment and implementing Census Bureau block-data. Finalized maps are due in December, and must gain approval by the Colorado Supreme Court. These congressional maps become official in 2022. They include the new 8th Congressional district.
Right now, the commission is drawing their first round of map drafts. You can learn more and keep up with the process here.