Estephanyart and Her Canvas of Life

Estephanyart would like you to know that she is a pop star — period. Estephany Perez, aka Estephanyart, a DACA recipient by way of Juárez, Mexico, is an entrepreneur within the local pop music landscape, whereby the music comes first, but the world she’s creating is anything but an afterthought. That world is colored with old-world Chicano imagery, Chola aesthetics and shades of manic pixie dream girls as imagined through the lens of Tumblr and Myspace. She is a multi-hyphenate — a bilingual singer-songwriter, artist, clothing designer, make-up artist and influencer among other things.  In the eyes of Estaphany however, everything she is and everything she does is in pursuit of an artful existence — to paint her truth outside the lines and across the walls.

Based in Colorado Springs, Perez lives with her biggest fan – whom she calls her father – her high school counselor. Her mother worked three jobs and her birth father, though living in Denver, was never around and she and her brother didn’t get along. Needing a better environment when she was 15, her counselor offered up his home and also helped to book her first session in the studio.

“He’s definitely like an angel that God sent me,” recalls Perez. “I can remember never being able to afford good stuff and [while] it was never a problem for me, I’ve always been humble, but yeah, my dad moved into my life and he really helped me be able to be more creative.” 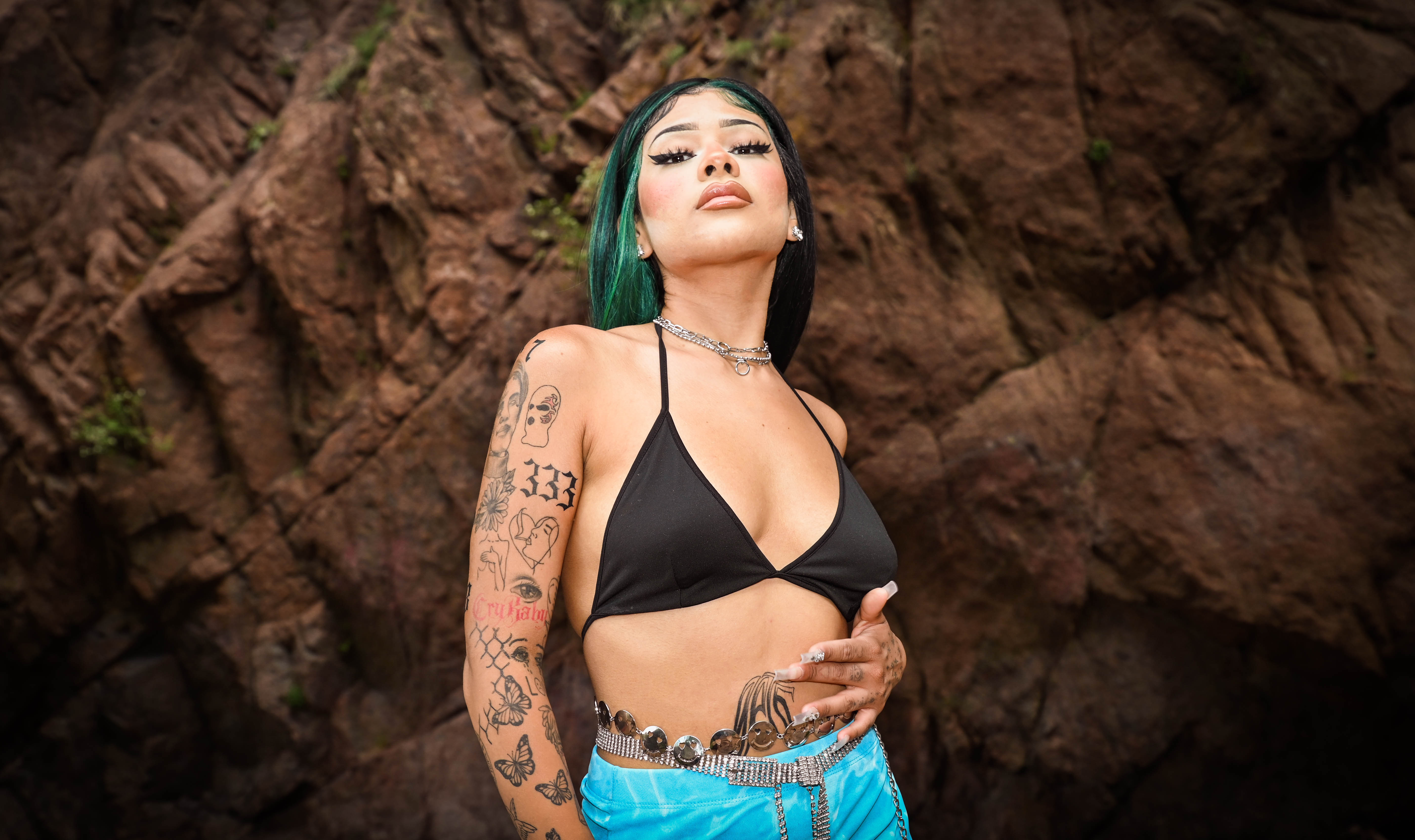 He also played a huge part in opening her mind to the person she could be — a person with dreams on the table, bigger than herself, and the means to accomplish them. For Perez, making it as an immigrant on the merit of her creative endeavors, without having to rely on manual or service industry-based labor as the backbone of her American Dream is a goal. Helping Mexican women specifically to dream outside the confines of a meager Americanized immigrant existence is her mission. More than anything, she wants the Mexican women she grew up around to know what inner confidence looks and feels like.

“I’m just really big on inspiring women, but mostly like Mexican women to follow their dreams. Just watching my mom, I tell her what I’m doing and she just looks really clueless. She just doesn’t have dreams that big, like she just doesn’t, and sometimes that’s kind of hard for me.”

For Perez, she is already one step ahead of her dreams. While speaking, she refers to herself as famous — not in a tabloid frenzy sort of way — but in the way that she presents herself with the glam and sincere audacity for the outlandish. In person, it’s not hard to see why. Walking through Colorado Springs, Perez is frequently the topic of conversation — the “it” girl oozing with so much style, sexuality and charisma, that it’s hard to talk about anything else when she enters a room. Like Banksy’s infamous painted elephant, she’s both the scandal and the stunner, and whatever previous thought ran through your mind, she’s lives rent-free in a space it used to occupy. 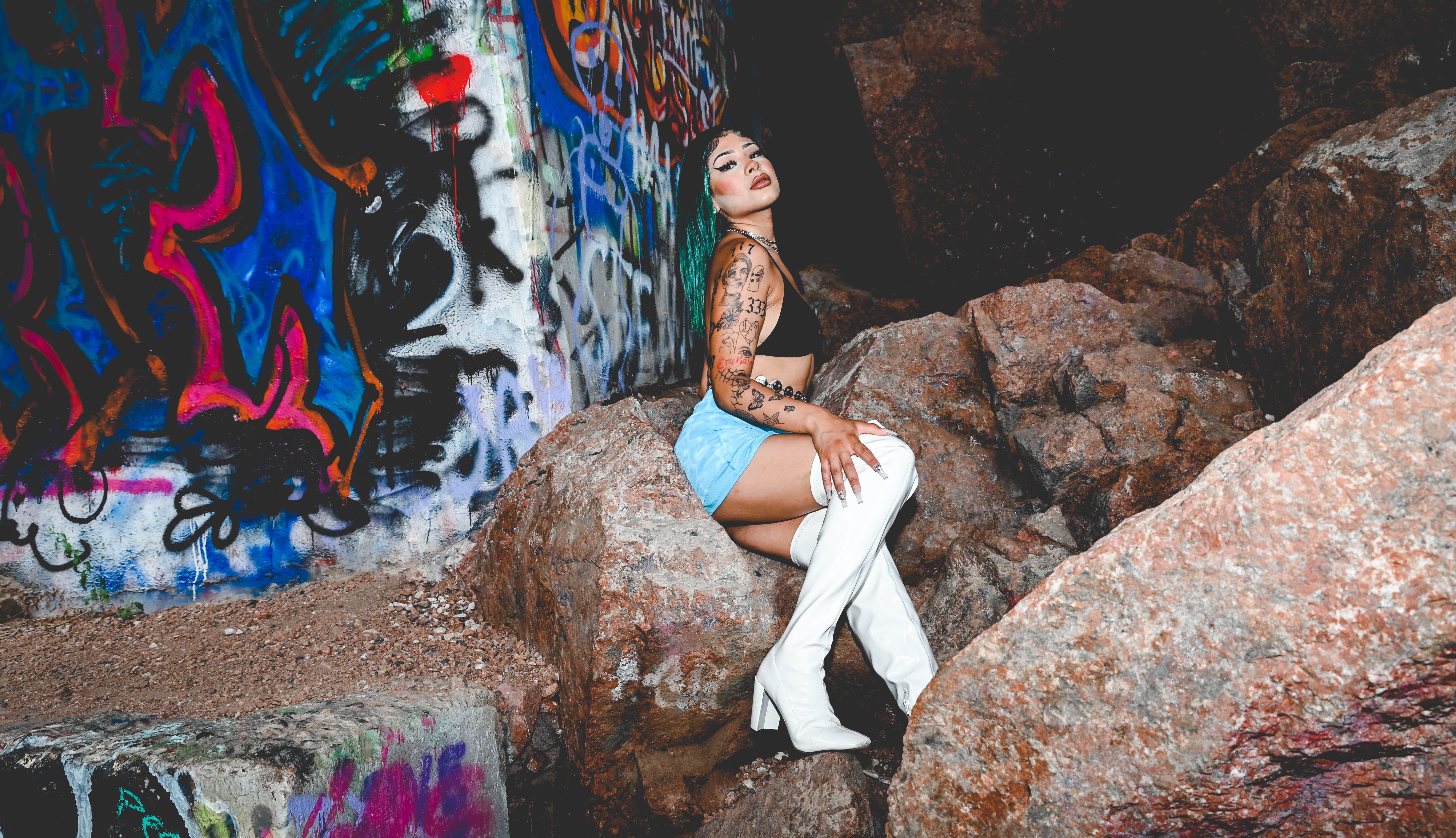 While the aesthetics are certainly arresting, Perez lets it be known, that for her, it’s more than a look — it’s a lifestyle.

“I’m a pop star, you know, and I think that I say everything in the present tense because everything already is set and I believe in everything so hard. I know how hard I’m working for this and also how deserving I am to live my dreams. It may sound crazy to you, maybe not, but I really detached from Estephany — she’s just my person,” Perez proclaimed, referring to the person outside of the pop star. “It’s like, she’s my kid, but I’m not actually her. I just know how much she’s been through. I talk about myself as ‘she,’ you know, but that’s really how I see it. I’m not Estephany, I’m like the spirit caring for her.

She continued, “at a certain point, I detached from myself and I think that happened when I started to learn self-love.” 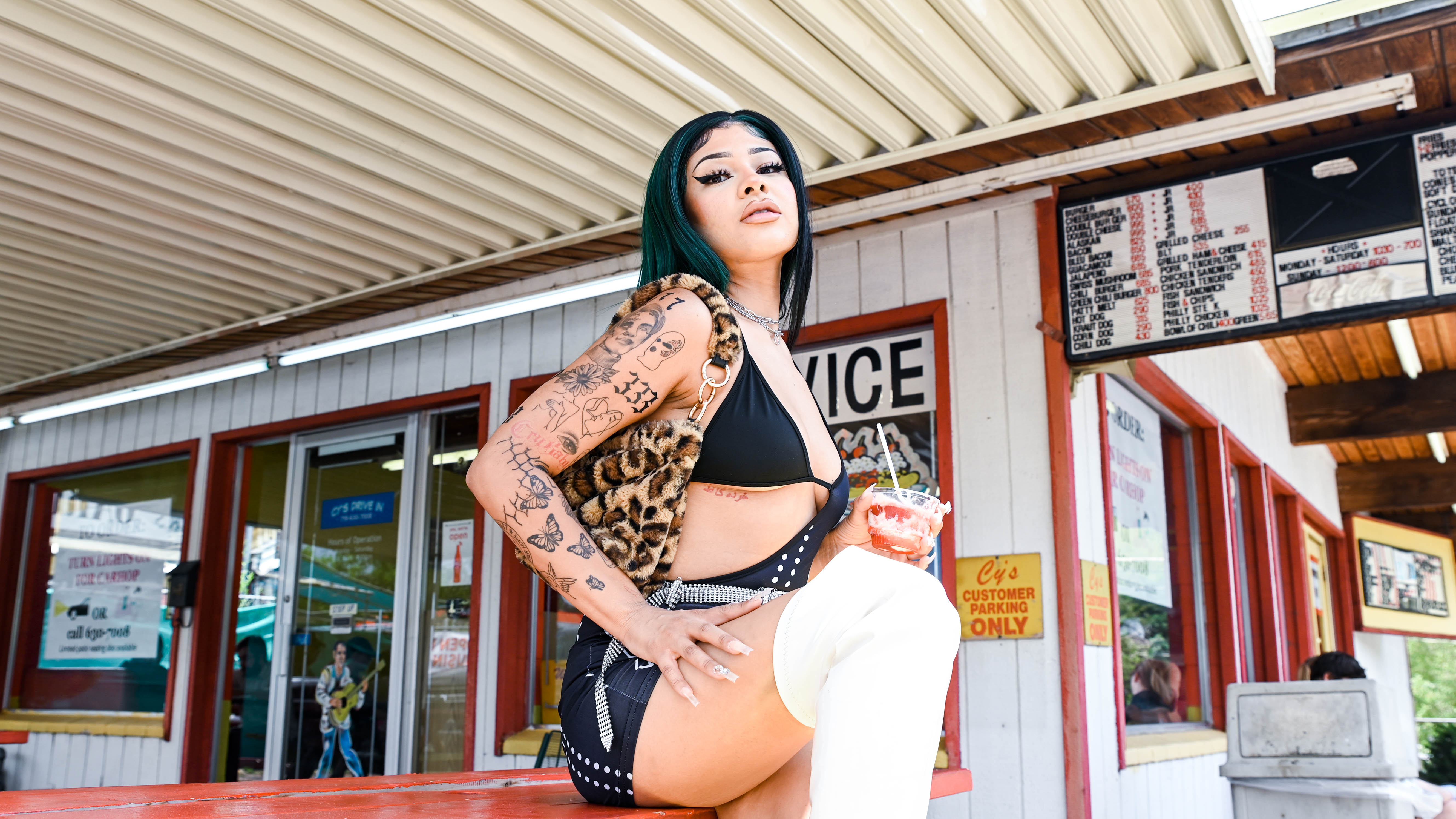 Talking to Perez, all roads lead to Estephanyart, her creative alias that encapsulates her entire existence. There’s no doubt and there’s no backup plan, it’s nothing less than pistons firing toward a future filled with the creations from her mind’s eye — wherein, even upon her deathbed,  life will forever and always imitate art.

“I really just believe that life is art man — even the mistakes, even the changes and even the suffering. The whole thing is just a journey of art — this really cool experience, and I think the craziest part is we’re all doing it together. “The reason it’s Estephanyart,” she continued, “is that Estephany is the human needs and the ‘art’ is my spirit.”

Along with her visual aesthetic, a large part of Perez’s calling card is the music itself. Predominantly autotuned and broodingly emotive to the tune of a Juice WRLD, ABRA and Yung Lean, Perez riffs on life as it happens, the malaise of the day-to-day, the heartbreak and the view from the other side. While not groundbreaking in its execution, it captures the moment du-jour of a generation of depression and emotional reconciliation in hazy waves of synth pads, vague Spanish influences, trap drums and a syrupy delivery that’d make Ariana Grande blush. It’s a combination that has proved definitive for gen-Z and if Perez plays her cards right she very well could be an arbiter of its next wave. As someone who deals in certainties, however, there’s no place for chance — just a promise, and endless promise at that. 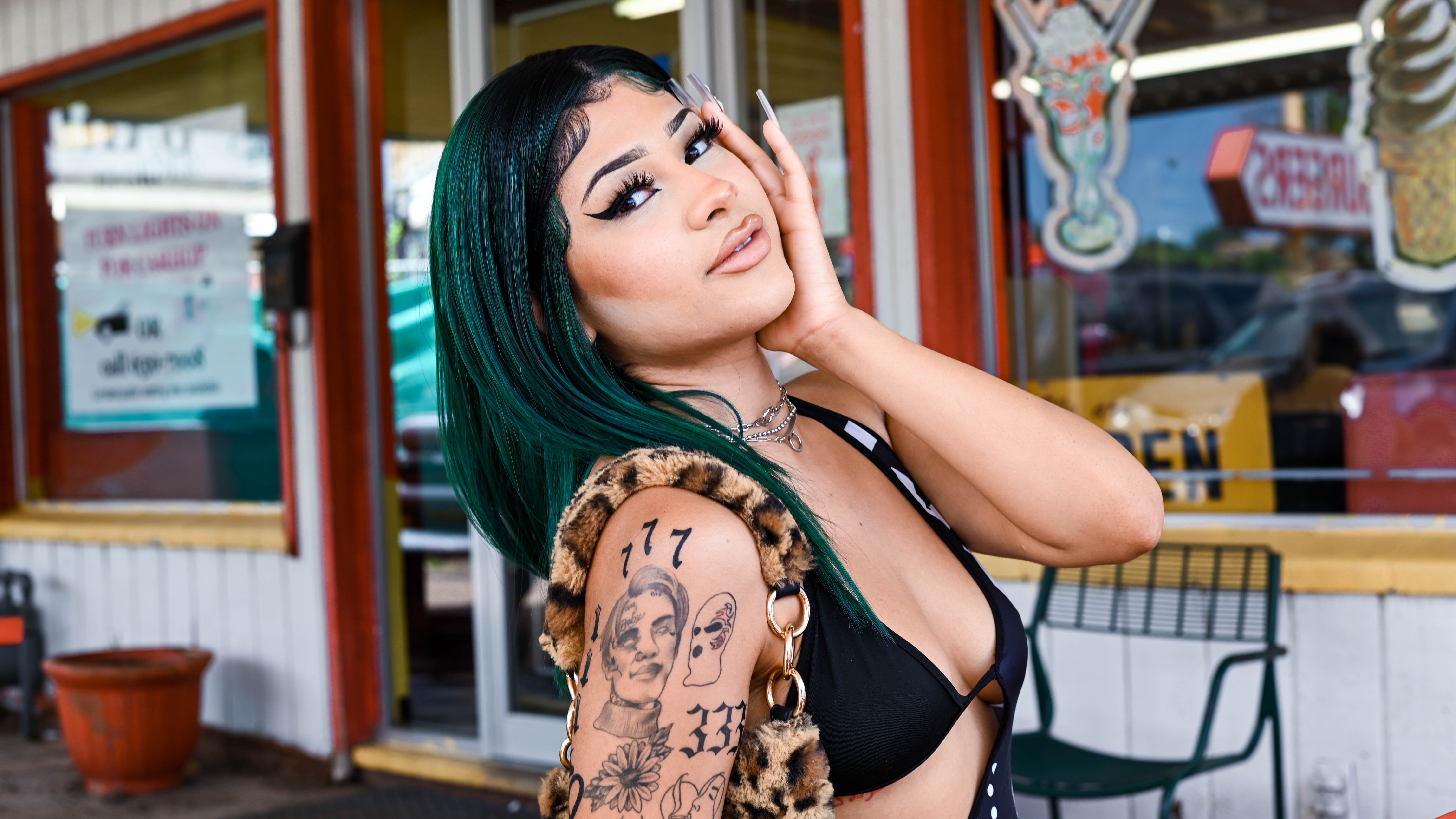 Perez is truly the rare type of person who has no time to wait for a title or for someone to give her a seat at the table. She much rather do it herself with a whatever means necessary approach. Whether that means swinging from the chandeliers and screaming from the rooftops, there’s an urgency to her ambition. However, where many falter on earthly pursuits of fame, power and influence, Estephanyart vibrantly drips off the page with something purer. It’s as if Estephanyart was a blank canvas where the ink never dries and there’s always a space to be filled — maybe it’s art imitating life.

Check out Estephanyart on Instagram and on Spotify below: