Colorado Drought Season Is Having A Split Impact Across The State

Sustainability is a cornerstone issue for Denver and its residents. As we look ahead at a future where climate change will impact every one of us, we want to give a platform to the people and groups leading sustainability efforts in the Mile High City. In this sustainability series, we will discuss the problems, explore the solutions track the efforts and explain how to develop better sustainable practices in daily life.

Amidst another intense drought season, Eastern and Western Colorado are experiencing a drastic difference in impact. While Denver has regular intervals of summer rain, areas west of the Continental Divide suffer from extreme drought climates and raging wildfires.

2020 was the third driest year on record for the state. Right now, conditions vary dramatically between the Front Range and the Western Slope. In Denver and surrounding Front Range counties, people have access to typical amounts of water supply. Folks are simply encouraged to be mindful of water use. In contrast, the Western Slope is in a heavy summer drought. Places like Grand Junction, Glenwood Springs and Durango are experiencing extreme or exceptional levels of drought, the most severe drought levels.

As of late June, the National Drought Mitigation Center shows roughly 30% of the state faces extreme drought. Over 35% of Colorado in still in a severe drought. 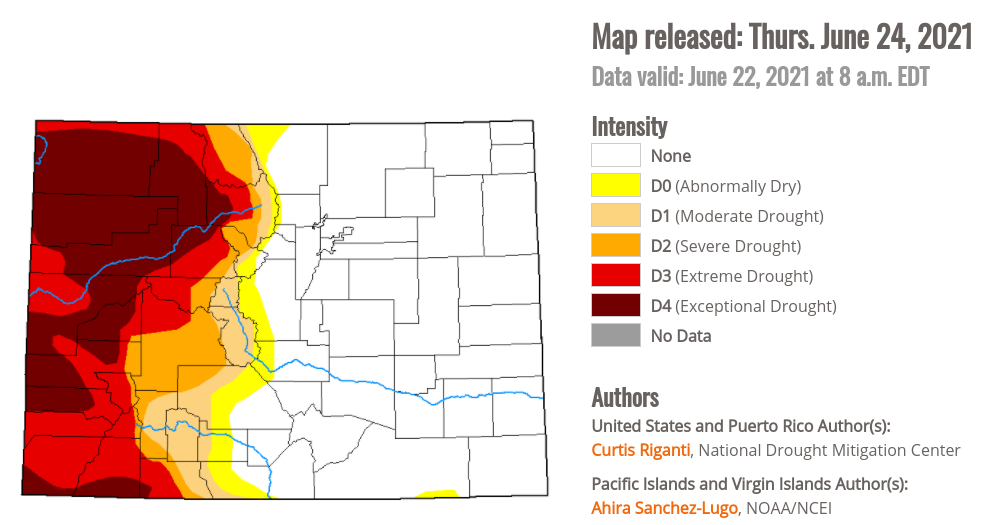 Colorado’s only outside water sourcing comes from hydro logic precipitation, such as rain or snow. When the state receives low levels of precipitation, they face a potential dry season. Matched with high summer temperatures and little sign of rain in the near future, dry season becomes drought season. Essentially, drought is a water shortage that results from and becomes exacerbated by a lack of precipitation.

While Denver experienced a heavier rain and snow season, none of the precipitation reached western Colorado. The Continental Divide creates a natural barrier between east and west. The Rocky Mountains cut through the state north to south at over 14,000 feet, sometimes creating two dramatically different climates. 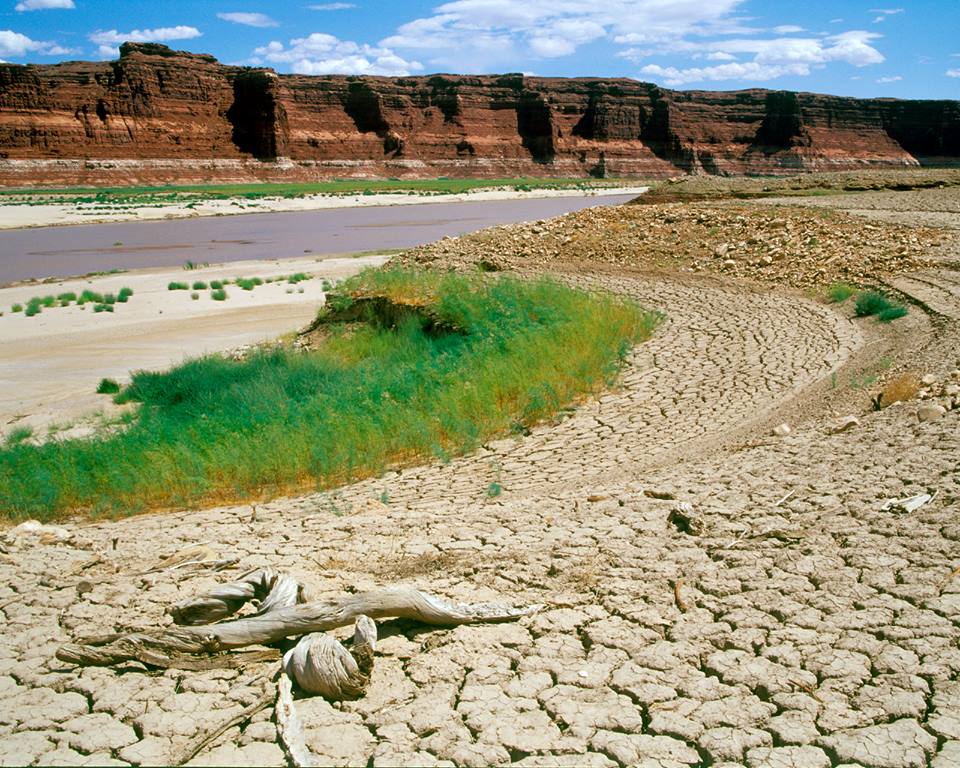 Photo courtesy of Bureau of Reclamation

As the state heads into the driest months of the year, residents in Western Colorado find themselves stuck in survival mode. Areas with extreme or exceptional drought already face a dangerous wildfire season. According to the Colorado Division of Wildfire Prevention and Control, wildfire season typically begins in late July or early August, but wildfires began in late May of this year. There is a direct correlation between lack of precipitation and increased wildfire density. Five wildfires occurred so far; only one is fully contained. The rest are barely contained and are likely to keep spreading. The Sylvan Fire, which began 16 miles south of Eagle, is the largest so far, with over 3,800 acres burned to date.

As of now, most of the Western Slope depends on water reservoirs. Overall, statewide reservoir storage remains at 84% of average. Basins in Southern Colorado hold less storage than the rest. If the reservoirs begin to run low, some counties may see water use restrictions put into place. The Bureau of Land Management took some precautionary steps by transferring some of their livestock to other areas in order to conserve resources.

Members of Colorado’s Water Availability Task Force (WATF) aren’t optimistic about conditions improving over the summer. “Many indicators are calling for an increased chance of warmer and drier than average conditions across the state for the rest of the summer,” said Becky Bolinger, Assistant State Climatologist for WATF.

Drought season can have an impact on any activities or travel taken out in Western Colorado. Some potential changes to be mindful of include drought conditions when traveling, camping, hiking and backcountry camping in Western Colorado. Pay close attention to wildfire conditions. You may need to reconsider your summer plans to travel west in order to stay safe. 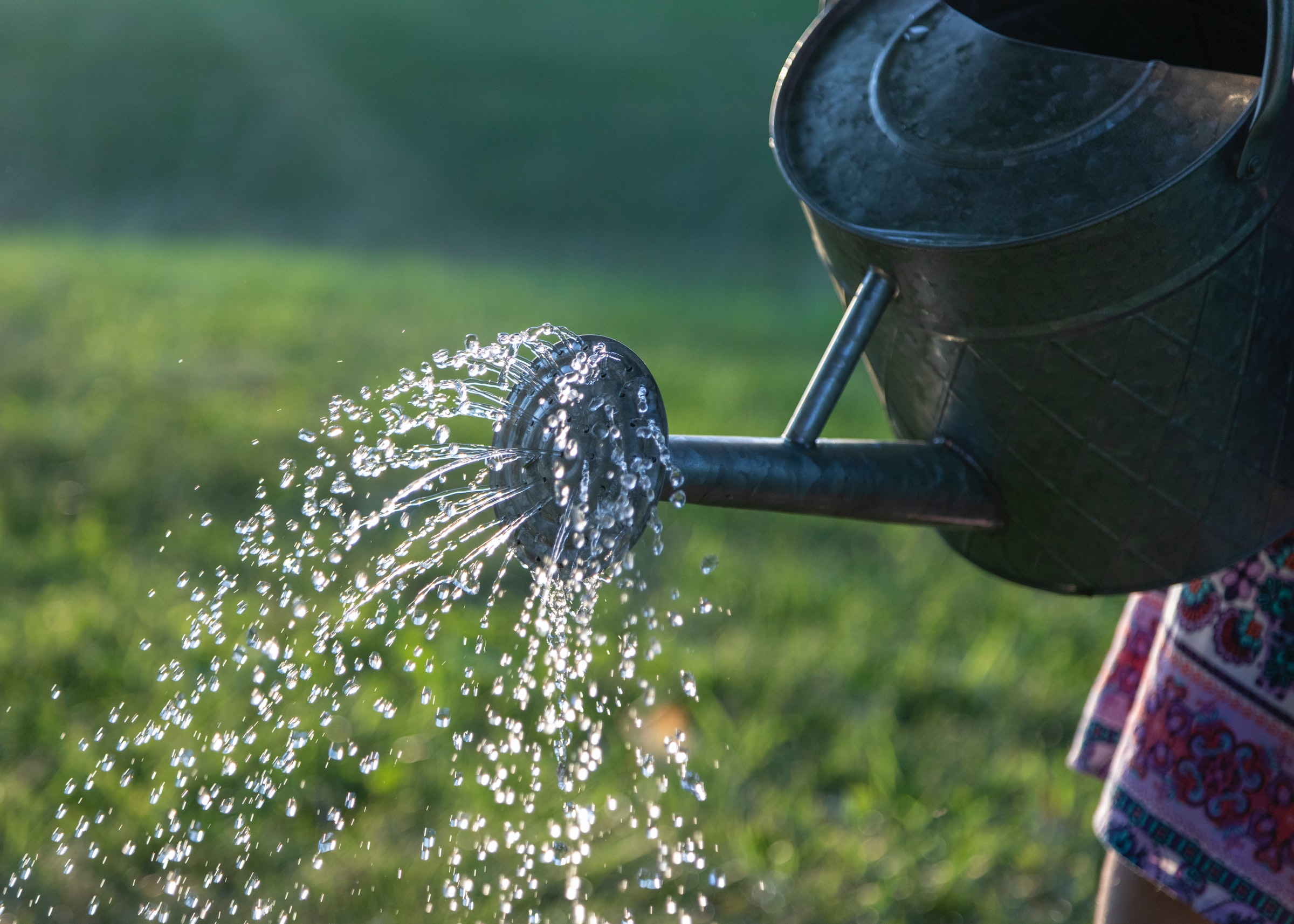 This year, Denver and the Front Range aren’t likely to experience drought conditions. However, members of the Colorado Water Conservation Board warn of possible drought in future years. Also pressing is Denver’s rapid population growth, which can stretch water supply in the short and long term. While the state works on several water diversion projects, many experts confirm water conservation efforts are a more sustainable approach. Bottom line: Denver residents will need to get used to creating sustainable habits for their water use sooner than later.

As of late June, Denver has no official water use regulations. Still, the Colorado Water Conservation Board recommends everyone should pitch in to conserve water to mitigate future drought conditions. In June 2020, the board released a Drought Management Planning Guide for over 700 water providers in Colorado. The guide shapes the scope of drought vulnerability, the potential impact of unmitigated drought and concrete mitigation steps for water providers.

On an individual level, if more Denver residents participate in water conservation, the city is still likely to see results. Additionally, it’s possible water conservation will become the new normal this decade, so it’s wise to build good habits early.

The Environmental Protection Agency released a comprehensive guide to saving water across the state. Love Colorado Water is a nonprofit organization designed to increase conservation efforts statewide. For individuals, they recommend “Colorado Water Fourteeners” or 14 ways to save water indoors and outdoors. Their main areas of focus surround sustainable lifestyle changes around how people use garden hoses and sprinklers, dishwashers, clothing washers, refrigerators and faucets.

For easy refreshers on water conservation, you can check out Love Colorado Water on Instagram: @lovecoloradowater

You can learn more about Colorado’s Water Plan here.