“Sometimes you kick the ball… sometimes the ball kicks you.” These aren’t my words, nor are they Socrates — they came from keyboard/guitarist Jeremy Lawton after frontman Todd Park Mohr punts a stray beach ball back into the crowd. It’s a moment of comedic relief — midway through their much anticipated, full capacity return to Red Rocks — but I can’t help but take his words seriously, whether he meant it this way or not. He’s right — they know just as well as the packed house in front of them that, if musical performance in 2020 was a spherical object, it’d be a dodgeball getting hurled at their heads. The gang played two shows at Red Rocks last year: one virtual, one for under two hundred fans. Mohr tells the crowd himself, “we’ve pretty much been unemployed for a year-and-a-half,” but, on the night of June 13, however, Big Head Todd and the Monsters returned to a familiar packed house alongside longtime collaborator Hazel Miller. 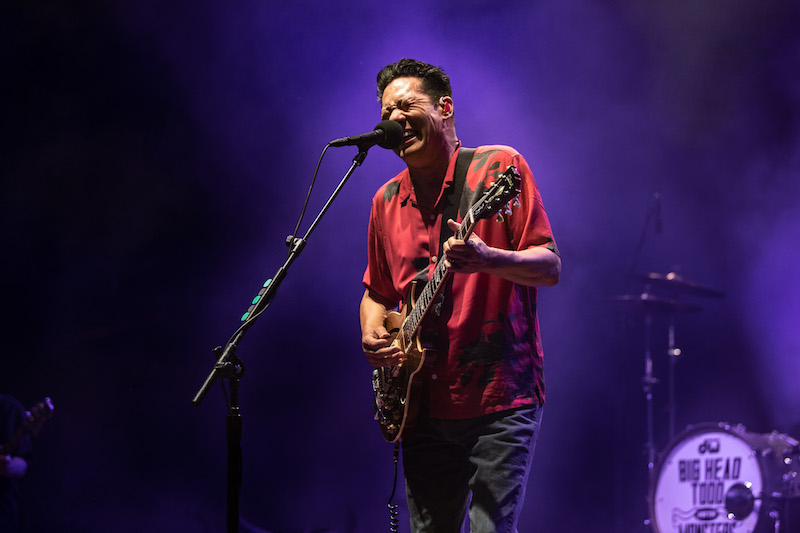 There’s a unique energy that exists at shows in their home state when Big Head Todd & The Monsters perform. The Colorado staples have probably jammed out thousands of shows in the area, yet the homely, comfortable atmosphere remains the same. This night was no different — the gallery in an endless mass of people, all of whom it felt like was watching an old friend perform for the first time in a while — a longtime pal that has defined Colorado’s blues-rock scene for multiple decades.

The crowd is a mixture of many age groups, but the largest demographic seems to be those who certainly saw the group in their earliest stages — rocking and hypnotizing Boulder/Fort Collins students at house parties and local venues in the late eighties/early nineties. 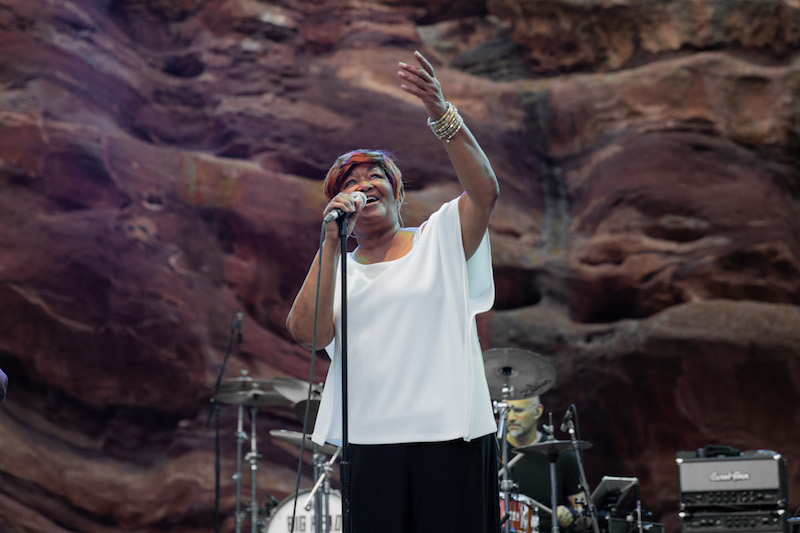 Hazel Miller & The Collective start the night off strong — Miller, a Kentucky native has been playing Denver area shows since 1984. She’s sung for the Clinton’s in the White House, as well as the Denver Broncos following their 1998 Super Bowl victory. An opening act for Big Head Todd, she tells the crowd, “is a bucket list goal checked off.” Miller preaches to the congregation over the course of a rock-solid act — her strong, bellowing voice is the gospel, easing fans into the night ahead. Fans respond to her groovy setlist by raising their hands in the air, as if they’re being saved. In many ways, it felt as though that’s exactly what happened. 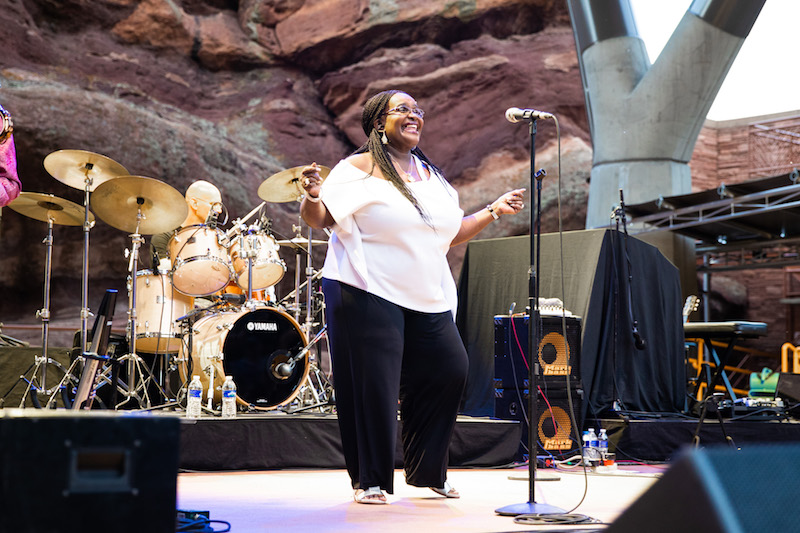 She started with “Home of the Blues,” joined by a lead guitar, bassist, saxophonist, keyboardist and her supporting vocalist, Coco Brown. “She Just Wants To Dance” was one of the show’s highlights — a soulful keyboard solo cuts the groove in half wonderfully. Did you know there was such thing as an electric saxophone? I didn’t, but I’m ecstatic I do now. An “E-Sax” solo from Jeff Nathanson is another shining moment in this one. Miller gave many thanks to the spectators before performing her final two songs — both renditions — “Bridge Over Troubled Water” and “Everyday People,” which got the entire scene on their feet before she exited the stage. It was a Saturday night, but it may as well have been Sunday at 8 a.m. because Hazel Miller took Red Rocks to church. 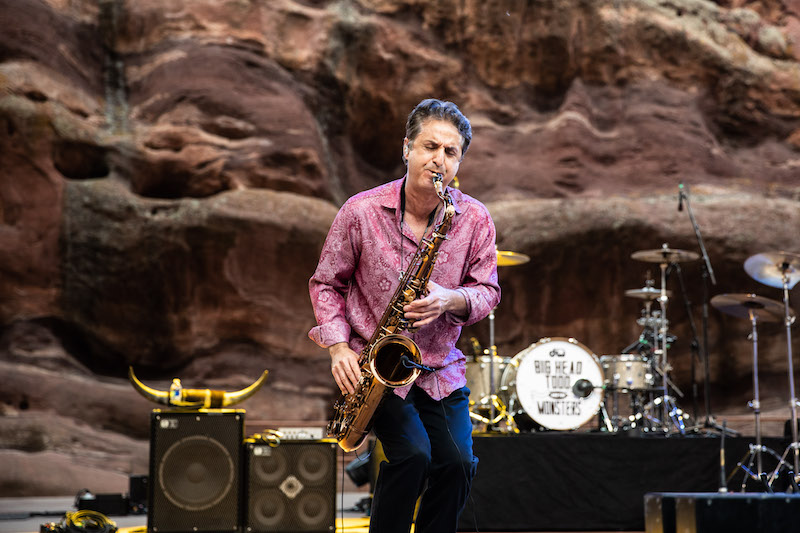 Big Head Todd and the Monsters opened with a slightly modified version of “Band on the Run” by Paul McCartney and the Wings. They ripped through this cover as flames exploded from the backdrop — a very cool pyrotechnic moment to start any set. His first original was none other than “Sister Sweetly,” the band’s title track from their critically acclaimed 1993 masterwork. This time around, they played it with extra groove, and the crowd sways accordingly. Mohr, draped in a red and black Hawaiian shirt, adds a thrashing guitar solo to the song’s bridge — a funk-laden rendition of one of their landmark records. 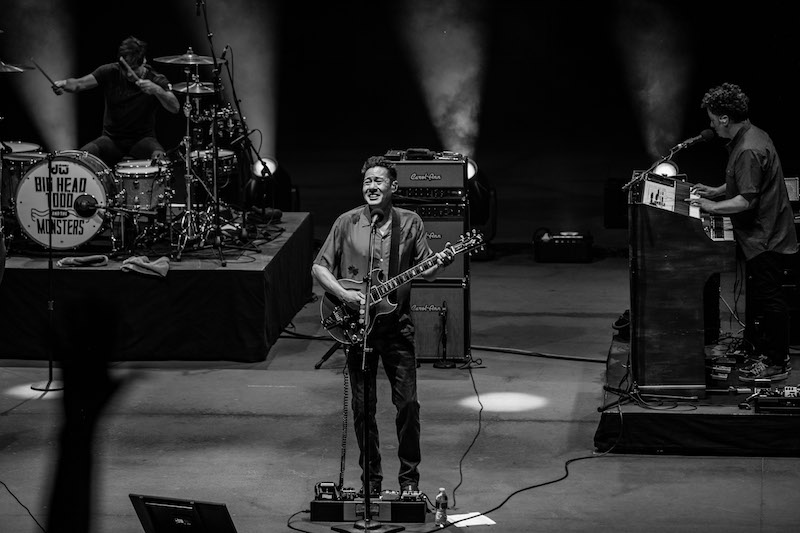 Songs “Hysteria” and “Fortune Teller” were examples of Mohr’s songwriting on full display. He sang them with clarity — they were easy to follow and complex in instrumentation. Half an hour into the show, the gallery was responding to every track’s intro as if it’s Big Head Todd’s biggest hit –unsurprising, considering his following’s infinite loyalty.

The performance’s greatest highlights came a few songs in when they played “It’s Alright” alongside Coco Brown and Hazel Miller, who re-emerged for the second time. crowd members locked shoulders and sang along audibly for one of the group’s slower favorites. Of all of the Miller/Mohr collaborations over the years (there are many), this was by far their most notable — Miller killed it with her vocals at the song’s climax, and, in turn, is met with an ovation. Then comes “Bittersweet,” the group’s most recognizable record. They played it with ease, as they have thousands of times before — there was not a soul in the audience that didn’t belt it at the top of their lungs. 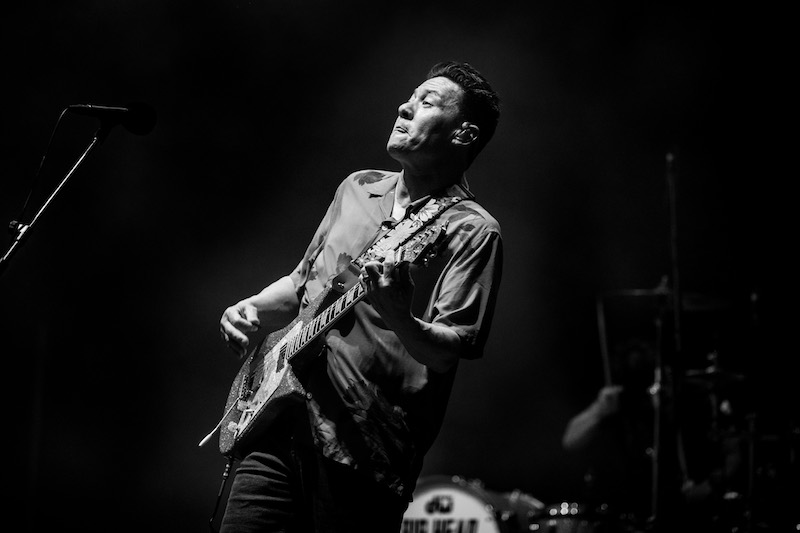 From there, they continued to mix landmark songs with mid-’00s and newer records, before closing out a show that felt complete, top to bottom. As fans filed out of the venue, you couldn’t help but notice the positive chatter and endless sea of smiles — it was like the Broncos had just won at Mile High Stadium. In all honesty, you could argue that Red Rocks was, for Big Head Todd and the Monsters, a home game — they laid claim, as much or more than any band that has ever graced the sacred ground, and this beautiful night proved just that.