Photo by Seth Allen. Courtesy of the artist.

buddy.not.bud Captures the Sound of Gentrification on Uproot City

When Payton Johnson, better known in the local music scene as buddy.not.bud, left Denver for New York City back in 2017, he knew that he’d eventually be returning to a city unlike the one he left. The extent of that change, however, rendered him speechless on arrival. While there is no word in English to describe homesickness for a home disappearing, saudade – a Portuguese assurance that the thing you feel nostalgic for will never come back – is a close approximation. Music, Johnson’s own second language, is his chosen medium to describe his loss.

In short, buddy.not.bud wrote an album about gentrification. In the producer/DJ’s own words, Uproot City is his attempt to capture the “debates and conflicts” around the seemingly inescapable process and “to really fight for the people’s Denver.” Johnson is aware that he’s not the only artist to wax nostalgic about the loss of community – his feelings aren’t new or unfounded in a city that is turning itself inside out day by day. What makes the project unique, however, is the artist’s non-traditional background. Many local musicians have released politically charged projects in the wake of a politically charged year – few of these projects have gotten them into a Ph.D. program at NYU, as Uproot City did for Johnson. 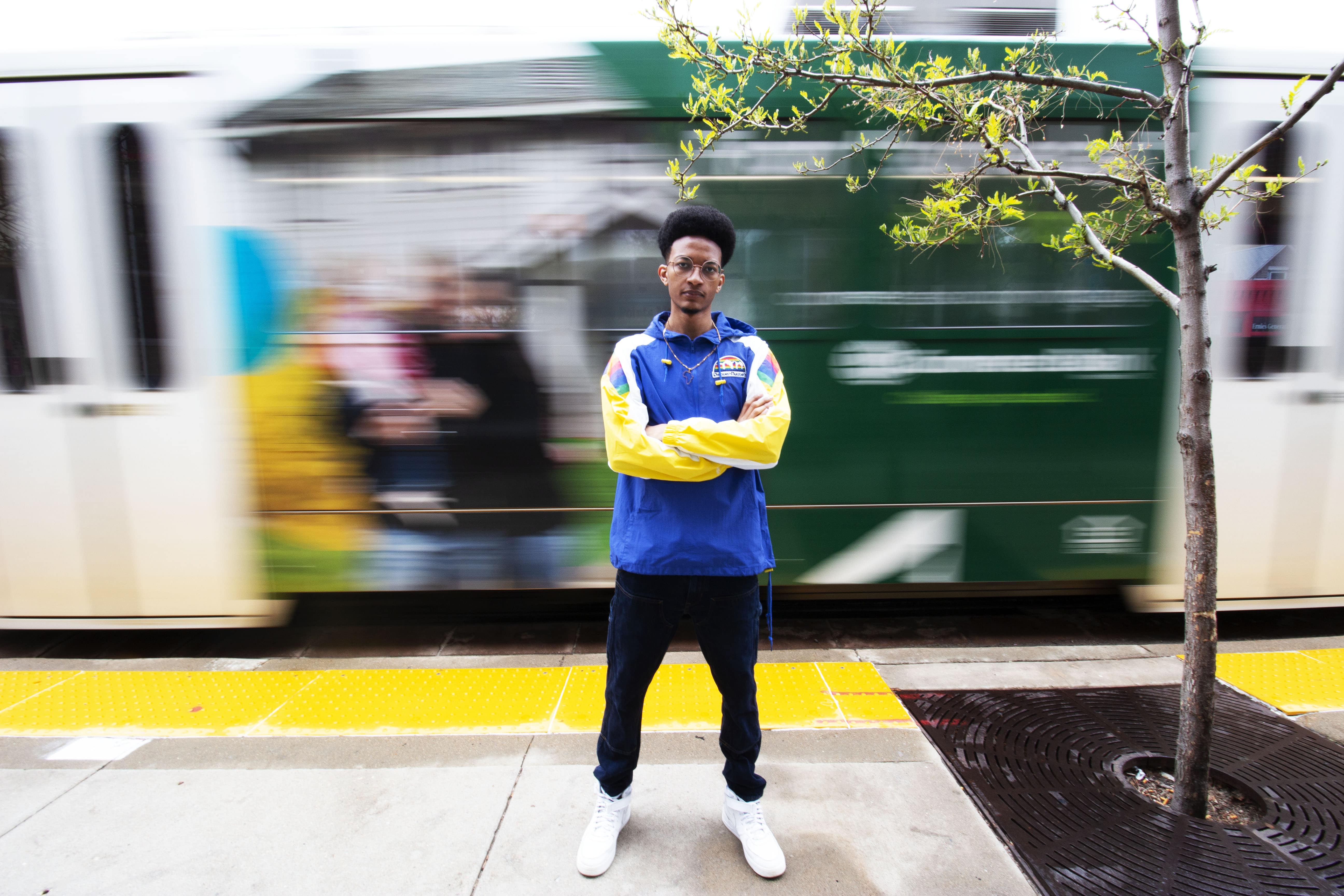 The LP is, literally, an Ivy-league sociology thesis in instrumental motion. Johnson uses album format to tell the complicated and personal story of gentrification, as “music goes beyond what statistics can convey”. He wanted to spin nuance and emotion, to make the listener sit with the grief he felt after his mother was priced out of the Denver metro, moving to North Carolina in the pivotal summer before he left for college. His father still lives in the Southern tip of Five Points, but after years of watching other close relatives struggle and eventually yield to the tidal wave of change, Johnson needed an escape. A vinyl evangelist since high school, he turned to underground hip hop records. To cope with feelings of powerlessness, Johnson eventually began making beats himself.

In this way, Uproot City is a strategic project as much as it is a creative one – the people who are enacting and benefiting from urban colonialism can cherry-pick any number of arguments to justify the process, but feelings, however – an individual’s pain and loss in the form of a sorrowful melody – cannot.

If further context is still needed, though – a widely-publicized report named Denver the second most gentrified city in the nation, behind San Francisco. Gentrification’s effects on low-income and minority communities are wide-ranging – the loss of social cohesion and feelings of cultural displacement are linked to stress, depression, and other physical health problems like diabetes. Displaced peoples are often relegated to less advantaged neighborhoods with fewer economic resources and authentic cultural touchstones. 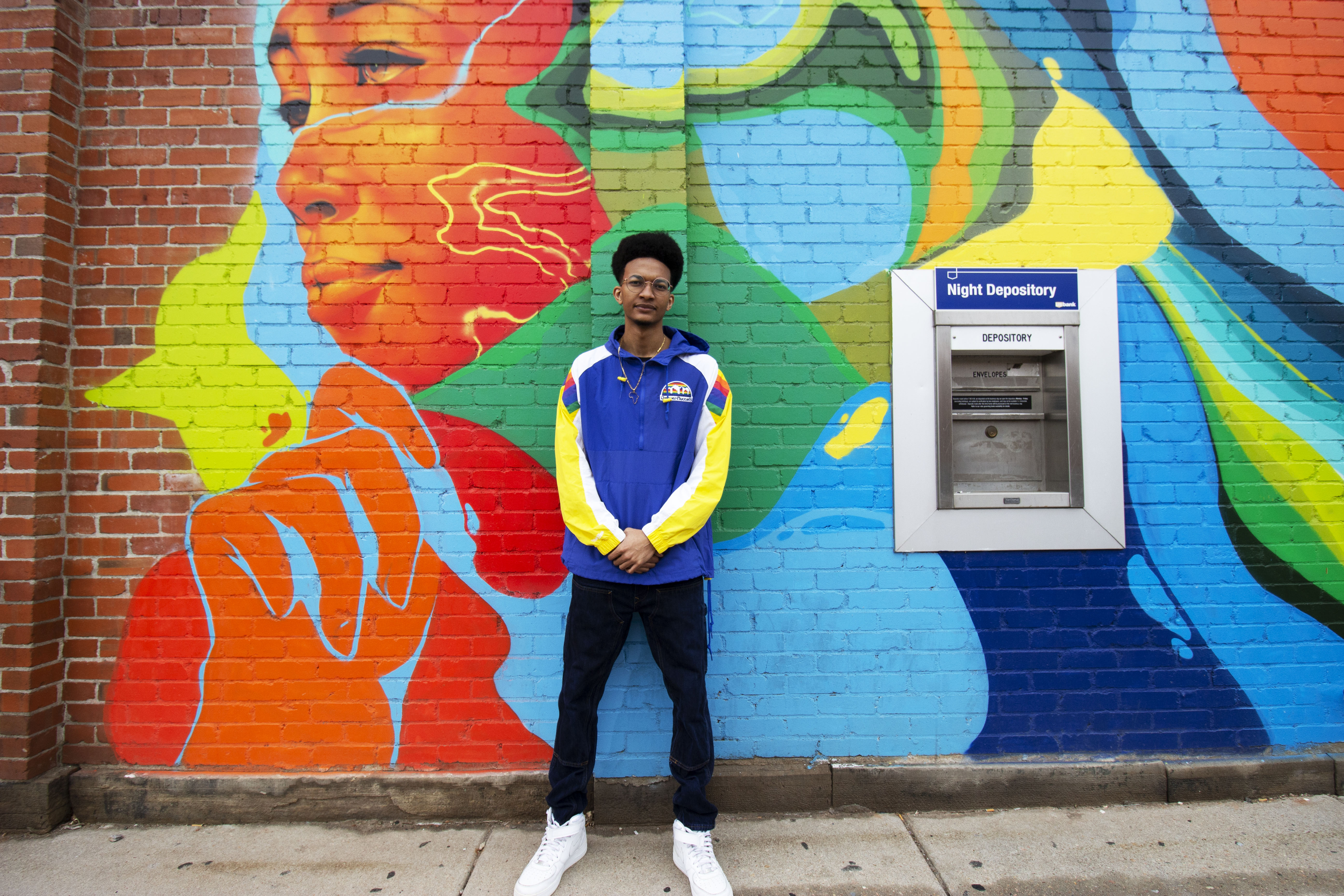 Johnson sees two major forces as emblematic of, or directly responsible for this very process in Denver – public transit and mass media.

“Each track on this album is named for an RTD stop. Public transit is such a central part of how we ended up in this situation and it’s so double-edged. On the one hand, the expansion of the light rail has accelerated development everywhere. On the other, public transit is this equalizer – it’s one of the few public utilities that we have left. Growing up in GVR [Green Valley Ranch], it’s what I took to get into the city as a kid. I wanted to explore gentrification as the exact opposite of this. It’s pure privatization, wherein you’re taking someone’s culture and selling it off at a markup.”

A carefully curated set of media soundbites, woven throughout Uproot City, add weight to Johnson’s observations. To keep Uproot City from feeling too preachy, Johnson undercuts his social analysis with lush instrumentals and textured interpolations. If he’s going to stand on his soapbox, it would be one posted inside of an art gallery, or a record store.

On “25th and Welton”, he samples a broadcast of the now-infamous Ink Coffee, “happily gentrifying the neighborhood,” incident that sparked national outcry about the Five Points neighborhood in 2014. Other songs feature snippets of Angela Davis speeches, alongside dog whistle-laden developer pitches for “neighborhood hubs on the rise.”

“I chose these clips to show that gentrification is something that happens to a community, not with a community. They show out of touch people can really be about what’s happening. You can paint 100 murals of Black and Brown people around the city to sanitize what’s happening, but they’re really no different than that ‘Ink’ sign. Covertly, or overtly, people are getting moved…I watched an adult kickball game being played next to a homeless encampment [at Sonny Lawson Park] the other day. It’s so blatant. That was insane to me.” 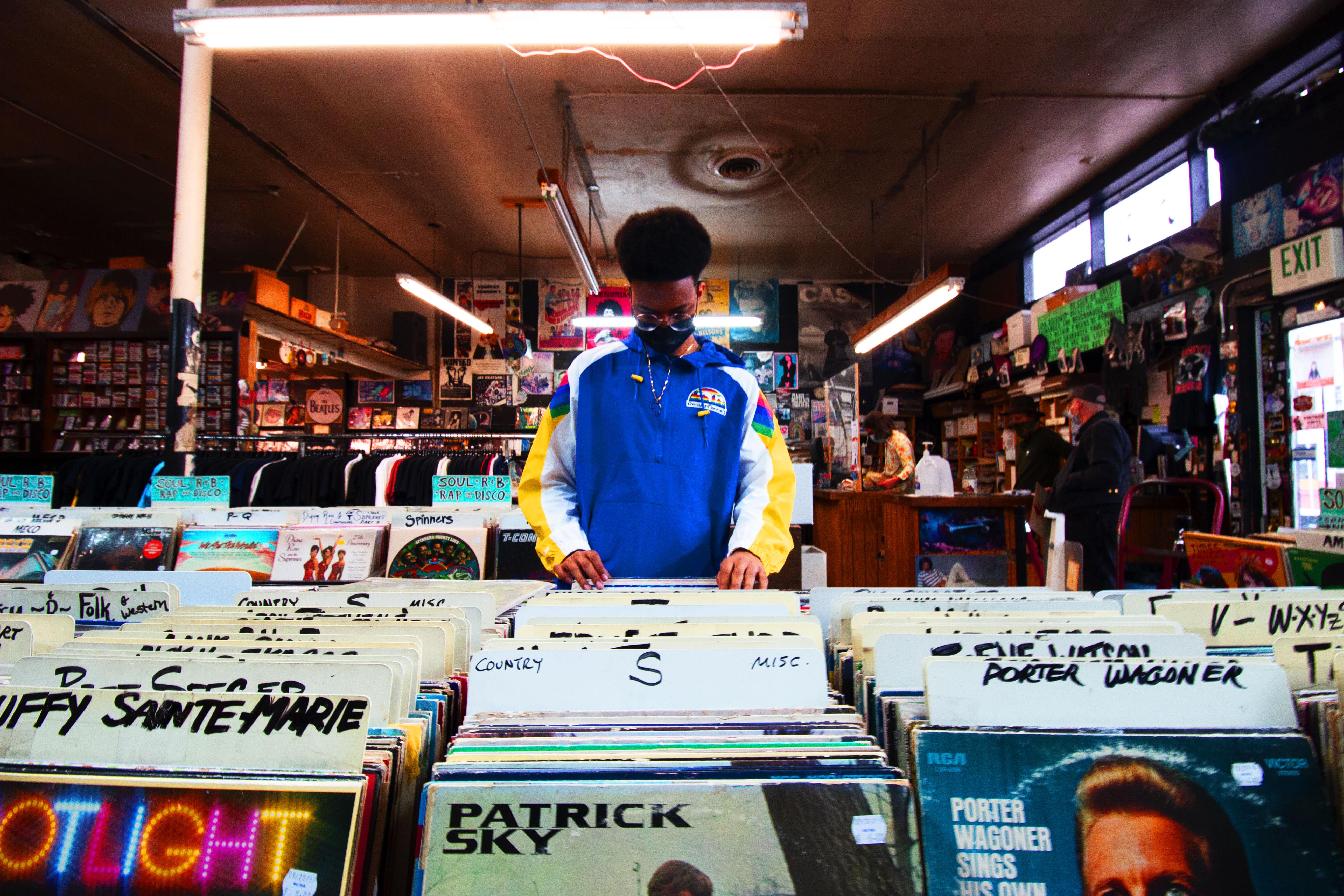 Shifting purely to music, Johnson draws influence from a variety of sources – J.Dilla, Knxwledge, Madlib – the producers of the hip hop records that kept him sane growing up. Some highlights off Uproot, “GVR & Argonne,” “GVR & Tower” and “Dayton” are interesting enough to avoid sounding like boom-bap throwaways or “lofi beats to chill and study to” – their sonic depth driven by the artist’s connection to all of these places. “Compositions” and “Dapper Dan,” from earlier projects, could pair well on shuffle with Flying Lotus or Kamasi Washington. The artist’s best work to date is, though, is “this song is blue.” Remarkably soulful and meditative, it’s a jazz loop to captivate the Tik-Tok generation. Upon first listen, it almost makes you forget about the artist’s youth (he’s only 21), relative inexperience and unconventional hometown beginnings – as an aspiring hip hop producer, at least. 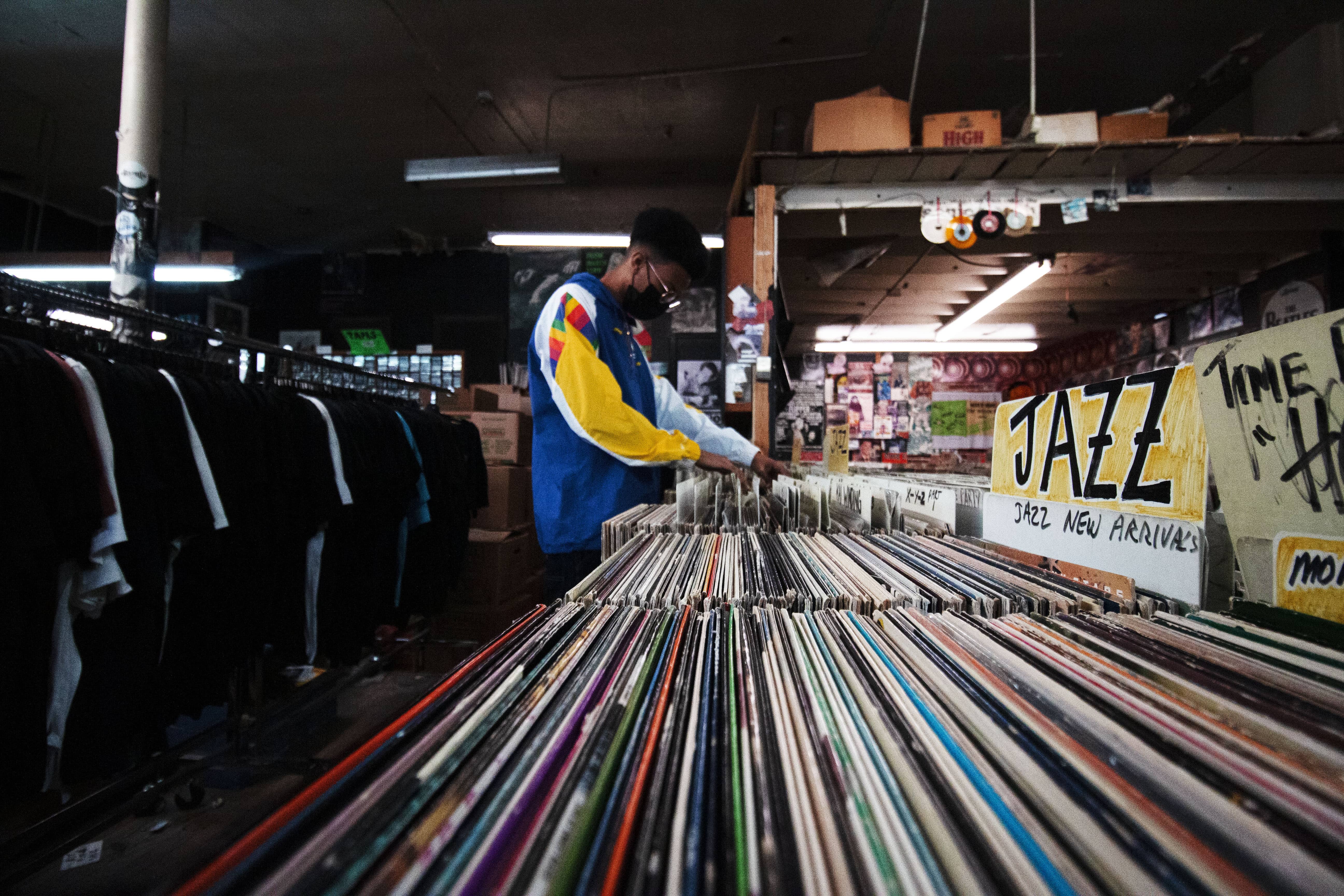 Johnson understands why people are continually shocked to discover talent in his city. Always academic, he traces Denver’s lack of musical establishment back to the factors that inspired Uproot City.

“It’s really hard to be creative when your neighborhood keeps moving. You look at the reasons that jazz ‘died’ in the 20th century and it was through the gentrification of Black communities and the shuttering of jazz bars and artists’ spaces in those communities. It’s the same thing that we’ve been going through in Denver, especially in the hip-hop scene. Being scattered all over the city isn’t productive for Black and Brown artists here or for any artists, really.”

Despite all of his righteous energy, Johnson is aware of his position–he will be leaving the hood for the halls of NYU in the fall. He doesn’t want any of his work to speak for, or over, the people he hopes to represent. He stresses a deep reverence for his community and his hip-hop contemporaries who are still hanging on.

“There are always going to be a million factors that keep Denver off the map. I figure that the next best thing I could do is put my map on the city.”

You can find buddy.not.bud, and his label, EST FUGO LLC, on Instagram, Spotify, SoundCloud and Bandcamp.

All photos by Seth Allen @sethisallen.