Photo courtesy of the Artist

Getting to The Root of Colorado’s Sweet Radish

We inhabit a world dominated by the modern consumer. It’s been this way for quite some time — the instinctual urge to take has far surpassed the urge to give. Such a statement brings into question the relationship one shares with nature. The push/pull dynamic linking humanity and the soil it walks must be examined — and the few who embody ultimate selflessness with mother earth must be respected.

The late, great Aldo Leopold once said, “Conservation is a state of harmony between men and land.” If this is true, then Sweet Radish has quietly created a symphony in Antonito, Colorado. Vocalist Morgan Velasquez and guitarist Abe Rosenberg are two of the three pieces that shape this musical duo. The third is Jack Rabbit Hollow Farm — a property that acts as both an animal sanctuary and a plot fueled by permaculture and sustainability. For Velasquez, that word means so much more than meets the eye.

“It’s pretty much the main focus of our whole operation, even down to our packaging. Like when we went for this, we wanted to live a fully sustainable, off-grid life. It’s this overall blanket for everything we do — from our animal sanctuary to our music.”

Sweet Radish is folk music in its most organic state — voice and strings. It’s as natural as the crops they grow and the animals they look after. Self-sufficiency, agriculture — by their own doing — quite literally surrounds them (even their Zoom background is a field of golden corn). This isn’t a hobby, nor a phase — it’s a full-blown lifestyle in every conceivable way. Their most recent full-length release, Ballads & Heartstrings, is yet another testament to their ecologically driven vision. 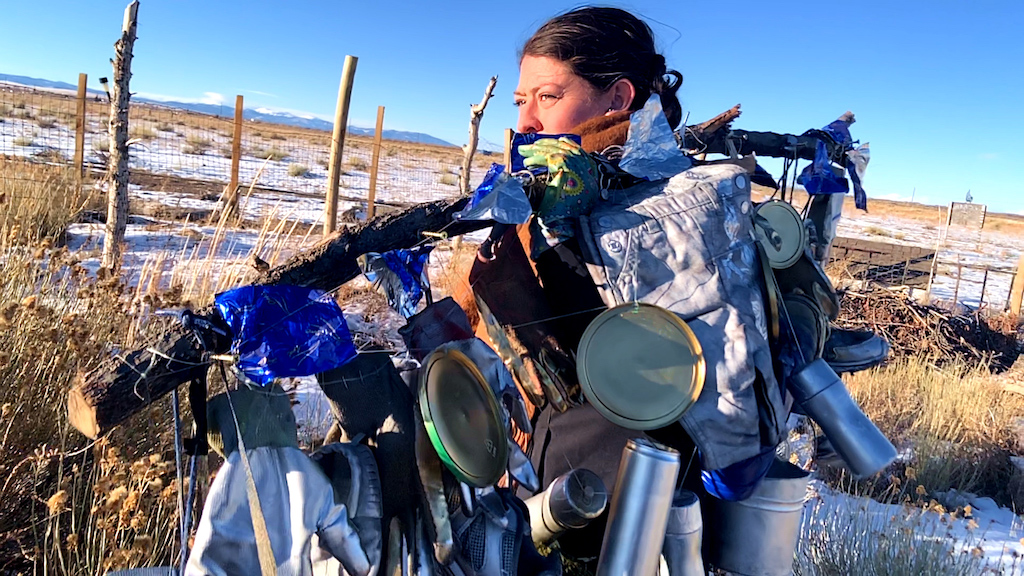 “I think that, over time, we realized more and more the importance of self-value. This emulated itself directly into our music. We embraced the idea of self-production — like, we’re not going to wait around until we have enough money to go into the recording studio and pay someone else to do all of it for us. We invested in ourselves.”

Confidence in their own sound paid dividends, plain and simple. Following the successful release of their 2020 album, The Garden & Life, the pair was able to improve upon their musical process in a multitude of ways.

“A lot of things changed between those two projects, both technically and emotionally. On The Garden & Life, we were using a condenser microphone, which emitted this old-timey sound. Basically, on Ballads & Heartstrings, the equipment and interface quality improved, and we introduced a number of instruments.”

A combination of both self-realization and the steady growth of their farm allowed for a thematic change in their sound as well — projecting messages in their music that come from a place of contentedness.

“Our emotions were also vastly different between the two albums. The Garden & Life was a result of trauma recovery and healing — our experiences, as well as others we had spoken to. This new record was made in a much happier, comforting space. We had finally found a community that we could connect with. The recording process felt like one big celebration, and we were honestly just so excited to share what we had created with a community that truly backed us.”

For Sweet Radish, the years leading up to the farm — in addition to the first few years that followed — were not always easy. In fact, it seems as though it was far from it. Abe Rosenberg has long faced bouts with self-criticism and doubt. The passing of his father  — an important figure and vital catalyst to his love for music — compounded with these feelings. Over time, however, Rosenberg has found solace through the ones closest to him — “My siblings and family have been a huge help in recent years. Like lots of things in my life, I’ve begun to view his passing in a positive, uplifting light.” 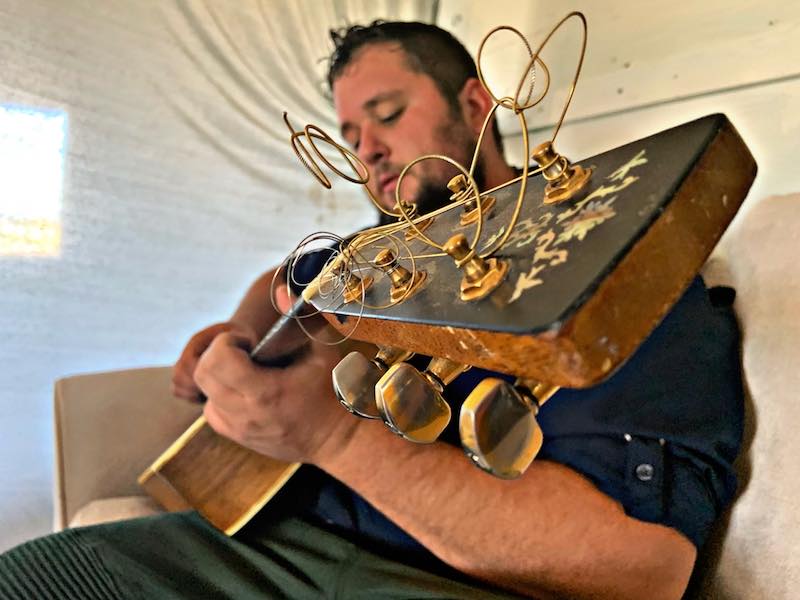 Family and community is everything for the folk duo. It’s what backs them in times of need and despair. It’s the crutch they lean on, the chair they sit in, the embrace they so desperately need at times. Unsurprisingly, Sweet Radish’s music sheds light on the impact the ones closest to them have.

“Since the birth of our son — everything has gotten better. Different parts of everyday life became more meaningful, including songwriting. I don’t know if we could’ve done all this without each other. Take “The Dig” for example — we wrote that record after hearing our son’s heartbeat for the first time.”

Sweet Radish says on their official website that Rosenberg is the engine of the group. If this is the case  — for which I have no doubt — then Velasquez is its backbone. Her voice is flowing and powerful. It commands attention. She claims to have been a closeted singer until her 20s, but music has always occupied filled a niche in her world, and she has the inspirations to prove it. 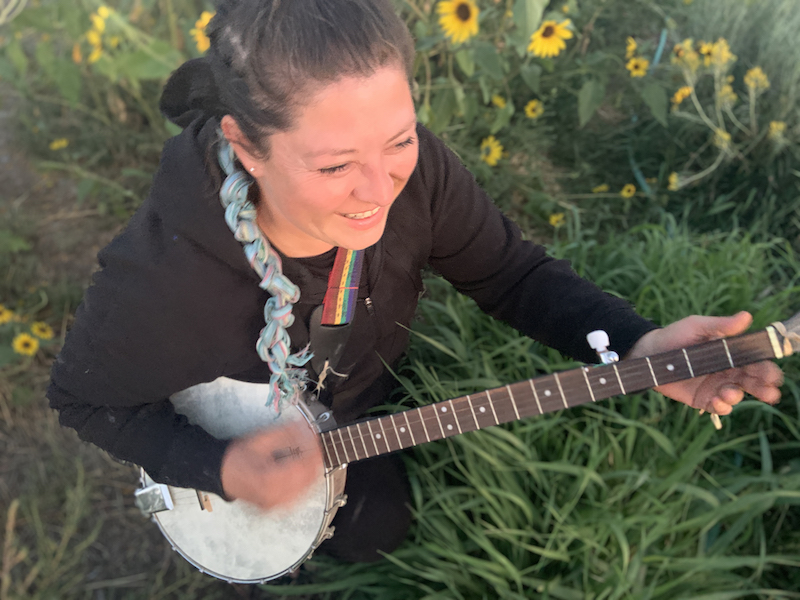 “I was a hardcore Bonnie Raitt fan growing up. I went to all her concerts, I had all her CDs — so I would say she was my first love as a musician. I was a closeted singer until my 20s, so I’d just listen. Recently, I’ve resonated heavily with Nahko and Medicine for the People. That kind of songwriting connects with the things we’re trying to talk about in our music.”

Throughout our call, her strength and natural-born determination becomes increasingly visible.

“After my father had decided to sell my family ranch, we were looking to carry on a similar way of life. We were thirty days from becoming homeless with a bunch of farm animals in our possession. In this period of uncertainty, pretty much by chance, one of our neighbors approached me about going down to the USDA office to explain our situation. I had no plan, but I just went and did it. I told them how we had no assets or anything to our name, but all of these animals and farm equipment. I laid out our vision — an off-grid farm and animal sanctuary that followed the rules of permaculture. Against all odds, they took a chance on us.”

Since the pair broke ground deep in the heart of southwest Colorado, a sort of symbiosis has sprouted from the ground beneath them — one that will continue to exist indefinitely. “It’s become this beautiful, coexisting relationship between our music and our farm. The money made from Sweet Radish music directly funds the farm.”

The future is bright at Jack Rabbit Hollow Farm. They’ve got two new albums written, a project in the works composed of covers requested by loyal fans, and a kids album inspired by songs they’ve made for their son. Additionally, Rosenberg and Velasquez continue to expand on their property.

“In the past few years, we’ve rescued more and more animals, installed solar panels sold to us by the Amish — we even rent out a campsite by the river near our property and use that for child education. We teach them empathy, while simultaneously living our lives in empathetic ways. It’s becoming this big circle.”

There are more than enough reasons to believe this circle is already formed. On the outer ring, you have a cycle of music, agriculture and sustainability. The inside — this metaphorical object’s heart — is family, empathy and a constant drive to preserve love for oneself and others. Leopold was right — conservation is the harmony between men and land. Sweet Radish, however, revealed to us all that there’s more to the story. Abe Rosenberg and Morgan Velasquez reached this level of harmony — and in doing so — discovered more about themselves than they could’ve ever imagined. 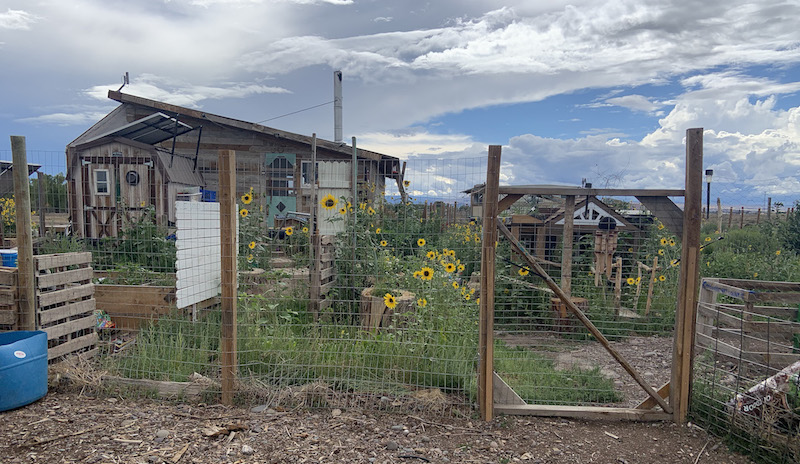