All Photos Courtesy of EL Jefe's Smothered Brats and Tots

This husband-and-wife duo hailing from Commerce City own and operate a food truck dedicated to smothered meat and potatoes. El Jefe’s Smothered Brats and Tots launched in April 2019, the couple’s first business venture. While the couple spent years in the corporate world — Renee Ruybal as an optometrist and Ryan Lopez previously in IT — the monotony grew old.

They took a leap and opened the truck to express their creativity and make people happy. Though neither of them worked in a professional kitchen, Lopez worked in his aunt’s Lakewood bakery for years, catapulting him from amateur to home cook. Since bratwursts are one of Lopez’s favorite foods, it was only right that the truck featured a menu full of them. The fare originally served burgers, but the cost proved to be too high and with all the unique toppings — each burger got a little too messy.

“We chose brats because not too many food trucks had really good ones,” Lopez said. 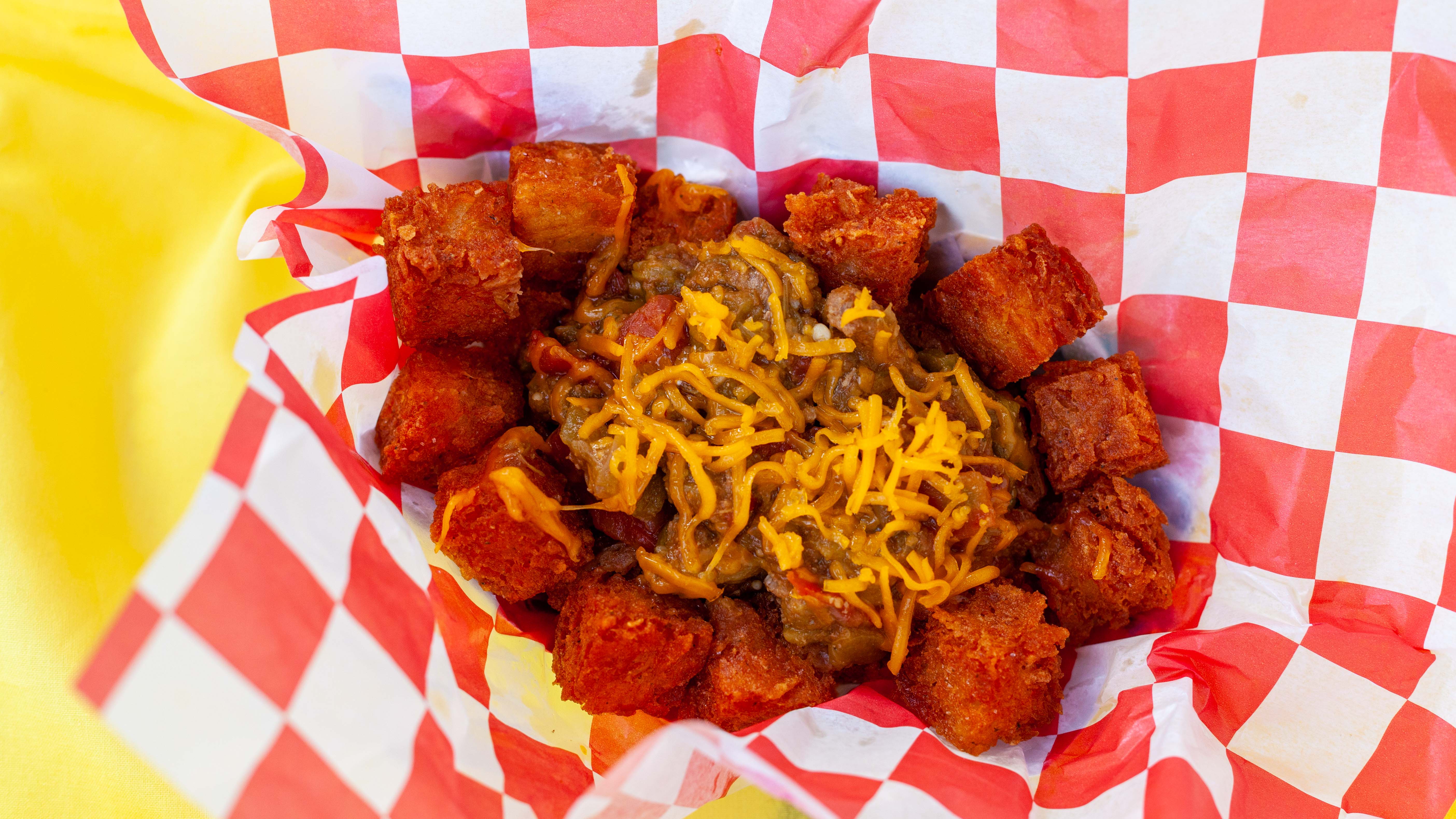 As for the tater tots, the duo was brainstorming a few different side options when Ruybal prompted the idea of smothered tots. With such well-done crispy potatoes, the topping possibilities were endless. El Jefe’s tots are not like the rest even down to the shape. Rather than little cylinders, these potatoes are square shaped.

“We use corn starch as a binder instead of flour. It makes them a lot crunchier on the outside and cloudy on the inside,” Lopez said.

Interesting enough, the duo worked with one of their engineer friends to build a specialty cutter to make around 3,000 tots in just two hours. With an abundance of crispy potatoes to dress, the menu showcases so many creative ways to devour them. From the Kings Tot — topped with homemade pork sausage country gravy, bacon and cheddar cheese to the Elote Tot — topped with homemade grilled street corn slaw, avocado cilantro sauce and cotija cheese.

The majority of El Jefe’s recipes are crafted by gathering individual flavors from the team’s favorite foods like chicken tikka masala, sushi and jalapeno poppers. The rest are influenced by family recipes including green chile from Lopez’s grandma, country gravy from his great grandmother and red chile from Ruybal’s family.

Using as many locally sourced ingredients as possible, the team frequents local farmers markets for fresh vegetables and uses Harvest Moon for buns. When it comes to unique dogs like the Big Popper, the team just takes some of their favorite snacks, breaks them down and adds the signifying ingredients to the dog.

“We thought, jalapeno poppers would be good on a dog, after adding the jalapeno cream cheese and bacon, it needed some sweetness,” Lopez said.

That’s where the creation of the raspberry jalapeno sauce came into play. And from there on out, the team branched out to making homemade hot sauce that can be ordered by the bottle— Green Goblin (pineapple habañero) and the Timid Gringo (mango jalapeño). Though the menu is famous for its out of the box condiments and sausages, it also gained a lot of popularity for the various dietary inclusive options. Not only is Ruybal a vegetarian, but many brewery bartenders had special dietary restrictions.

“We started making vegan items for them and they became popular, so we kept them on the menu. We noticed vegans don’t get a lot of fast comfort food. We try to make it taste as close to meat as possible,” Lopez said.

The same menu items that are offered for meat eaters have been duplicated using Simple Truth meatless chorizo, a Tofurky meatless beer bratwurst, almond based cream cheese, gluten-free tater tots and the option to substitute bun for a roasted poblano pepper.

While last year proved to be a struggle for many, the El Jefe team took each day with stride.

“There was a lot of adaptation, we had a schedule from March to November with an event every day. Then all those went away. We started doing delivery and scan codes at breweries. We started doing apartment events and added the option to order ahead through Truckster. We also parked outside grocery stores to offer discounted food to employees and gave out free food to medical workers,” Lopez said. 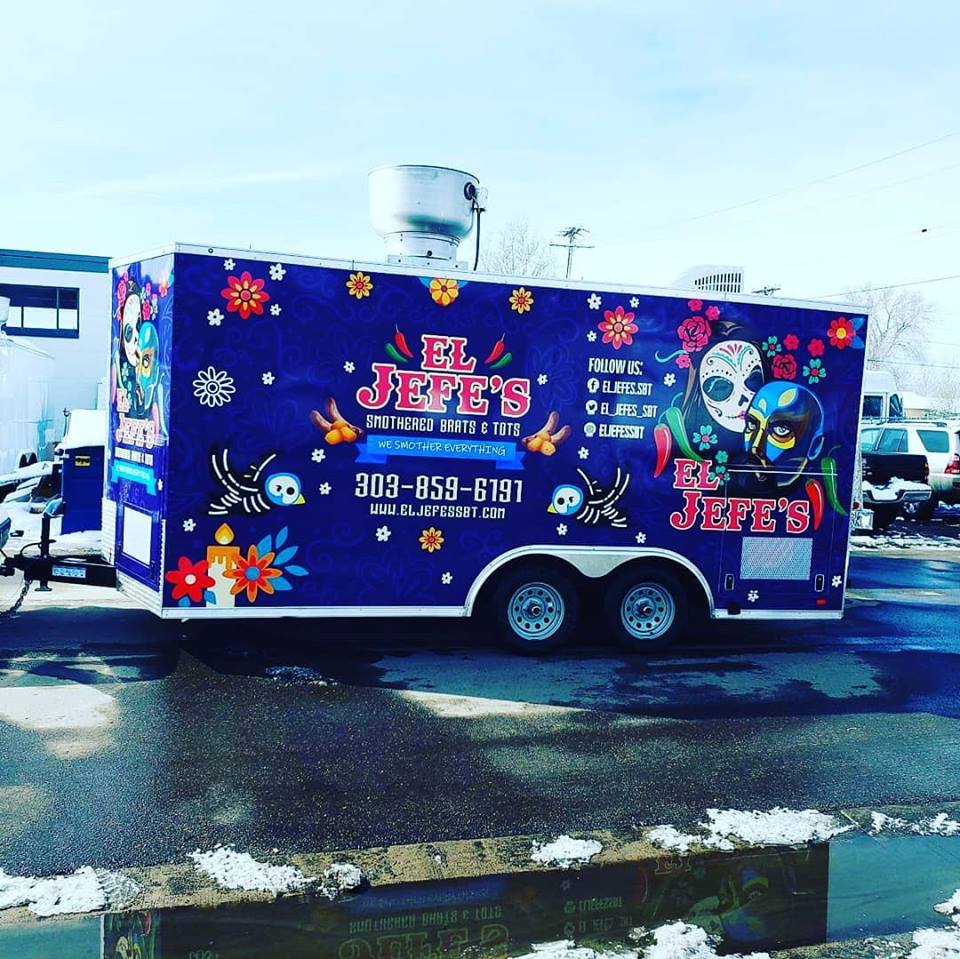 As for this years’ plans, the team is hoping to get back on a normal schedule and lock in some smaller socially distant events. As for the slightly distant future, Lopez hopes to create a program to help other perspective food truckers with a community full of resources.

“We want to open a business to help others start food trucks. With guides, rules, information about tax licensing and how to find employees if needed,” Lopez said.

When things were getting tough during the beginning of the pandemic, Lopez and Ruybal used this business as a creative outlet. Coming up with new recipes and thinking about different foods that wouldn’t normally go together influenced their creativity and became a theme for how they live life — pushing the boundaries and taking the necessary risks to make their dreams come true.

“Our kids are our biggest inspirations. America isn’t just about going to work. We want to show our kids that you can have a dream and live a good life doing it,” Lopez said.

El Jefe is open Wednesday through Friday from 5 to 9 p.m. and Saturday from 12 to 9 p.m. Each week’s schedule can be found online here.