Local DJ, visual artist and hairstylist Lauren Zwicky (aka L.A. Zwicky), knows how to flip a norm on its heads everywhere she goes. Whether she’s chopping someone’s ‘do into a wild, neon work of art, taking over galleries with massive installations that cover every inch with yarns and glitter, or throwing down a DJ set that is impossible not to dance to, Zwicky is not only a party in a person — she’s a queen of glam.

Zwicky first moved to Boulder as a child briefly before moving to balmy Costa Rica and Mexico during her teens. The Zwicky brood moved around often, taking up habitation in places like Hawai’i. Zwicky’s parents, “had killer music taste and loved to dance,” she said. “Growing up globally in the ’80s and ’90s, along with my post-college foray into Denver’s experimental DIY music,” led to Zwicky’s eclectic taste. “I was always making mixtapes and playlists and begging my parents to buy me more CDs,” Zwicky said. But it wasn’t until her college years that she got her hands on her first digital DJ controller. “I just starting teaching myself how to use the software through trial and error and lots of YouTube tutorials.”

She eventually found her way back in Colorado to attend Naropa University in Boulder and later moved down to Denver following graduation. Following her move to Denver a decade ago, Zwicky fell into the local DIY art and music scene. 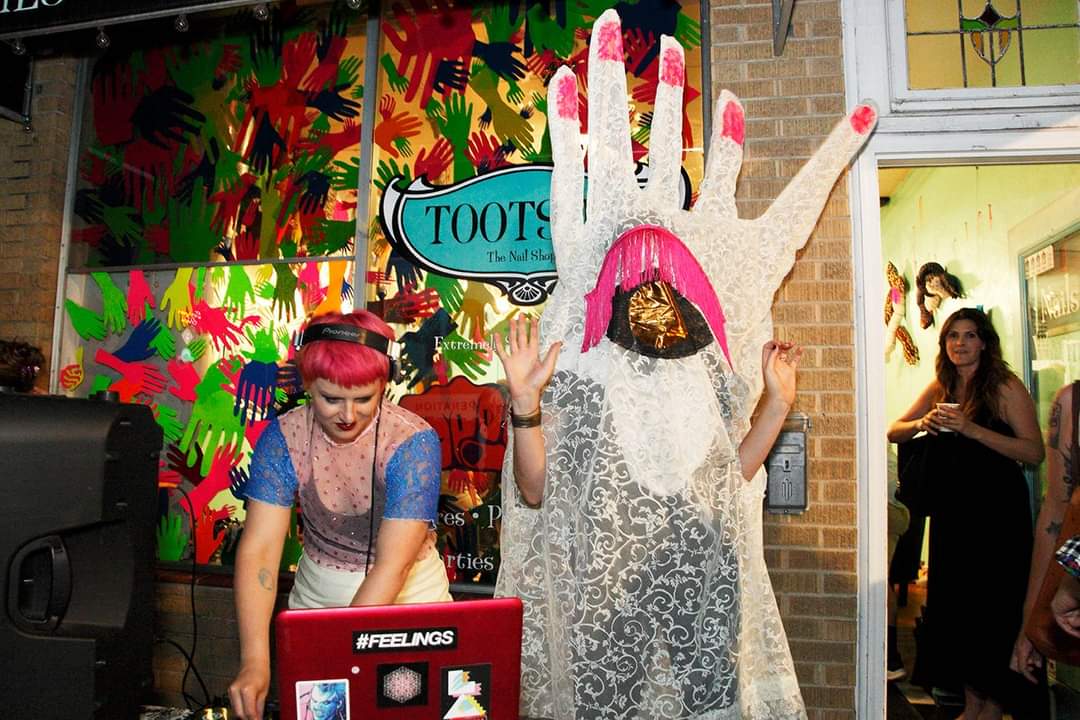 Some of Zwicky’s friends in the DIY scene of the early ’10s included close friend i.lind, along with Pictureplane and even a young Grimes. However, Zwicky’s musical preferences starkly contrasted that of her musical peers (with the exception of i.lind), naturally gravitating towards afro and Latin beats, deep bass, soul, funk, and disco. “Really anything electronic or dance-oriented, and I can also appreciate more avant-garde types of music — but really though, my deepest love affair is with disco.”

Playing warehouse parties and local venues around town, Zwicky eventually began running her first series, a queer dance party called Damn Gurl. “My first [Damn Gurl] party was some kind of special magic that I will never forget. We had some seriously good times that only come from raw self-expression in a dark, sweaty warehouse,” she said. Another fond DJing memory includes opening for Big Freedia, the New Orleans “club kween” DJ, several times. “It’s been a blast every single time I’ve had the privilege — so much booty,” she said with a laugh.

Following Damn Gurl, she launched a new party series called Sass Capacity, which was hosted monthly at Blush and Blu. “Denver lacks in inclusive spaces for the queer community to gather,” Zwicky stated as her motivation for the residency.  The presence of masc identities in Denver’s queer circles is huge. Gay cis-men host parties all across town and there are numerous gay bars that cater to that demographic of the queer community. However, lesbians and queer femmes in Denver feel invisible, and the bars reflect that. Blush and Blu is possibly the only queer bar in Denver that specifically caters to lesbians, or at least aims to create a visible space for lesbians and queer femmes. For Zwicky, who is queer, creating a space specifically for queer femmes felt not only urgent, but desperately needed. Each month, Sass Capacity featured different local guest DJs and performers with an emphasis on fundraising efforts for various non-profits and community members. 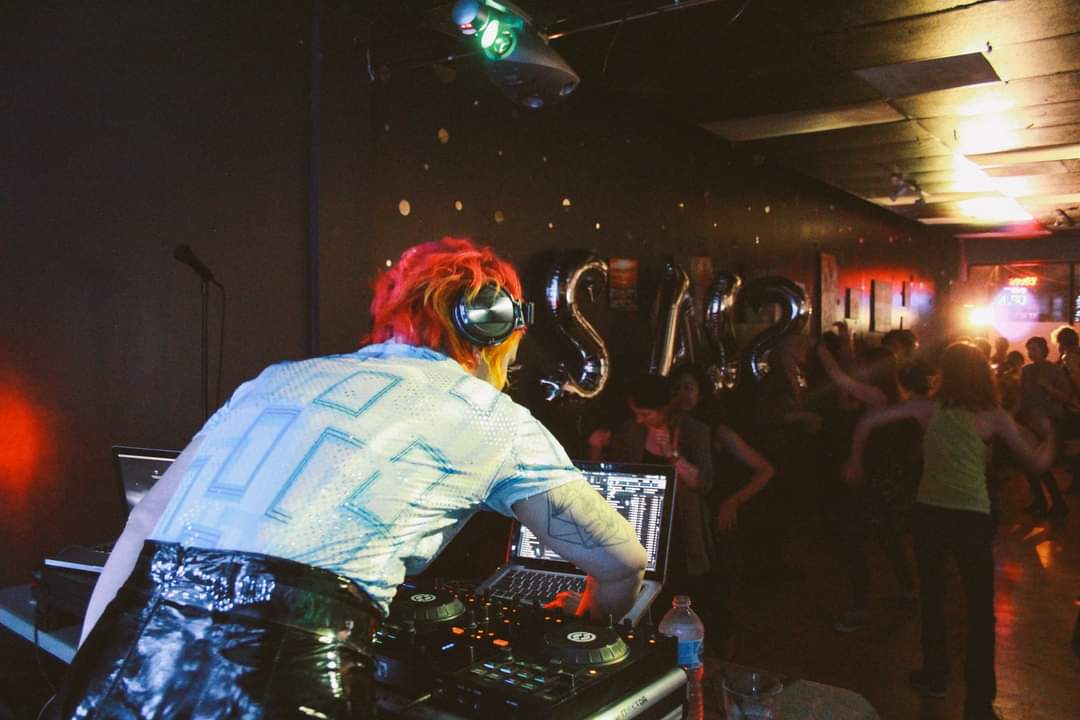 Every creative project Zwicky takes on breathes attention-commanding, queer spectacle. For example, take Secret Love Collective. The genesis of the collective grew from a frustration at the corporatization of Pride. “We didn’t see much queer specific representation at the main Pride events, so we took it upon ourselves to infiltrate the parade as one of the only non-corporate sponsored groups to march.” Since then, the collective has been involved in creating a number of interactive art installations and dance parties.

The weekend Colorado went into lockdown, back in March, would have been the debut of Zwicky’s newest queer party up in Boulder. “I was really looking forward to the event but it made me realize that I was spreading myself too thin between my day job as a hairdresser, a member of an art collective and a DJ/party planner.” She also realized, upon reflection during the lockdown, that she had begun taking gigs that were compromising her taste to — “accommodate the status quo, and that’s not why I started doing this. There are plenty of people out there willing to play Top 40 and EDM, but I ain’t one of them,” she said.

COVID also presented itself as an opportunity to deepen connections “to some really wonderful folks in the music scene, which led to some liberating and fun livestream sets. That is something I am incredibly grateful for,” said Zwicky, always meditating on the silver linings, even the faint one in a global pandemic. No matter the context nor the circumstance, Zwicky’s sunny and wacky individuality will always shine through, bright like a star. And with that, here are nine tracks that L.A. Zwicky can’t get enough of as of late.

This track is a “queer magic dancefloor chant,” according to Zwicky. “They Sleep We Love,” pays tribute to the lives lost in the Ghost Ship warehouse fire, a DIY space in Oakland that caught fire during an event and unfortunately claimed the lives of 36 young individuals, many of whom were queer artists and musicians. The lyrics serve as a reminder of the vibrant love within the underground, a community that has lifted up so many.

Described as a “rollerskating jam,” by Zwicky, Ghanian musician Kiki Gyan’s approach to the keys was described as prodigal by his peers. This song incorporates guitar licks charging with momentum, a grooving bassline and lovely falsetto vocals to create a jam ripe for skating.

One of Zwicky’s all-time favorite disco tracks, “I Don’t Want to Be a Freak,” is the anthem for all the real freaks out there, tearing up the dance floor somewhere.

Machine – “There But For the Grace of God Go I”

Zwicky picked this song because of the powerful story told through the lyrics. Written and released in 1979, this prime disco dime moves fast and heavy, telling a tale of pain and love over forceful instrumentation. With lines like, “Too much love is worse than none at all,” one can only imagine the emotions coursing through the lyricist in writing that out.

This 2017 acid heater stands out to Zwicky because “I just love the vocal chops overlaid on a minimal bassline.” When a producer strips down a track to its bones, the strength of each part really shines.

The vocals in this track catch Zwicky’s ears, and that grooving bassline moves deeply through your body. Released in July of this year, this song transports back to a warmer, sunnier time.

“Did I mention I like disco?” Zwicky joked. This 2013 slapper combines an unbelievably funky bass with soulful vocals to create a nostalgic throwback with updated machinery.

Desire brings together a deep house clubby vibe with energetic Aretha Franklin vocals to create a track that is, according to Zwicky, “simple but sexy.”

With a collaboration as powerful as LSDXOXO, Lauren Flax and DJ Heather, this track just won’t quit. Starting off with breaks and diving right into thumping techno, all while a howling acid line sears through, Zwicky closes out her Deep Cuts with a proper banger. As Zwicky aptly put, “I feel like I’m at the blood rave with cool glasses on.”