The current pandemic has forced many business owners to rethink their business models. From coming up with new products to changing the way customers are served, some of these new models might stick around for a while. One of those models is Robo Esso —a robotic barista developed by entrepreneur Matt Jones. Created to disrupt the service industry, Robo Esso introduces a contactless experience in his coffee shop.

Originally, Jones owned a coffee shop in Blackhawk and the pandemic forced him to get creative with solutions for a contactless way to serve customers. “I thought that automation was going to creep into the service industry eventually so I ended up researching it,” said Jones. He bought a Universal Robot and began to program it to perform tasks that were typically performed by a barista. “My original idea was that the robot would be more in the background and work side by side the barista so people would still have human contact but COVID forced me to pivot.” After COVID-19 hit Jones closed his coffee shop in Blackhawk to focus on making the robot 100% contact free. Jones reprogrammed the robot to create an experience where customers will come in, order on a tablet and the robot will make the drink and set it out. 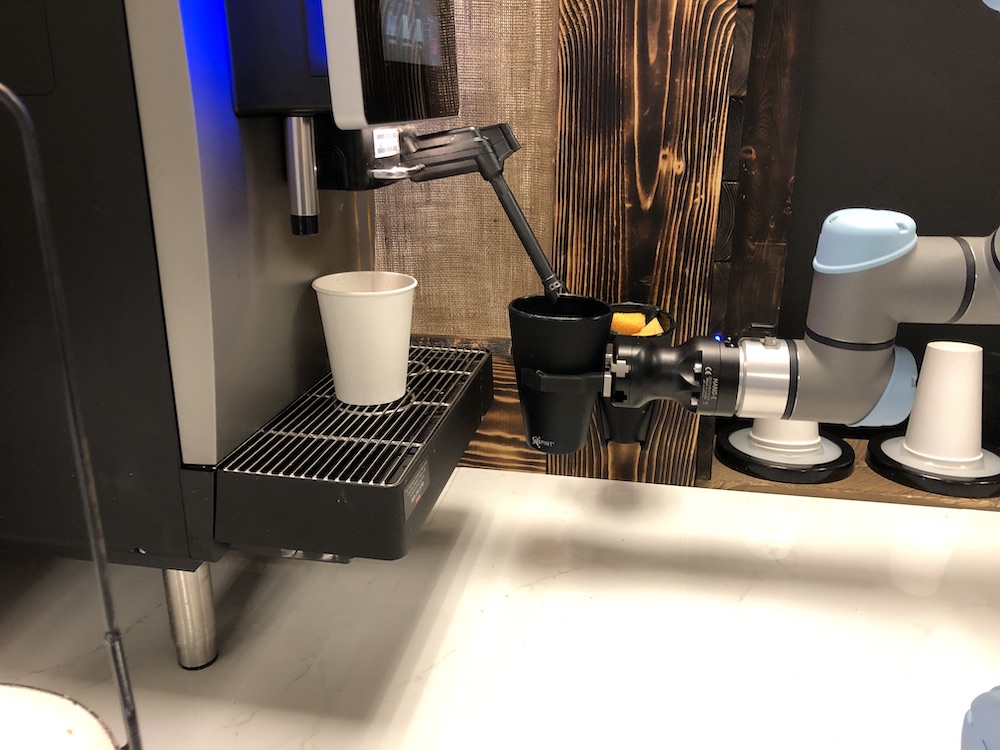 Robo Esso will open in Jones’ roastery space in Golden — on Colfax and 6th Ave — in September. Jones plans to be at the shop for the first few months to make sure the robot runs smoothly and iron out any kinks — should there be any — but hopes that he can eventually let the robot run on its own without an employee present. “It only needs about two hours of maintenance per day and most of that is taking care of the milk tap system and changing kegs,” he said. He also plans to program and sell more robots to entrepreneurs who want to open a coffee shop and avoid high labor costs or to existing coffee shop owners who have had to cut costs due to COVID. “The goal is to be able to put these automated coffee shops in locations where it traditionally doesn’t make economical sense to have a coffee shop there. The rent’s too high or there’s not enough traffic to justify the labor costs. With Robo Esso, those locations that struggle can now make a profit,” said Jones. He would be able to offer entrepreneurs the programmed robot, equipment and all of the training for about $100,000 — less than what it would take to open a traditional coffee shop in the long term.

Jones believes that automation in the service industry is inevitable and that he can either start doing it himself and disrupt the industry or watch someone else do it. “I’d be shocked if in five years if people weren’t utilizing robots regularly,” he said. Jones sees Robo Esso as a way for baristas to become coffee shop owners, “the idea is to lower the price point for entry [into the industry],” he explained.

Robo Esso will be the first coffee shop in Colorado to utilize robotic technology, paving the way for more cafes to do the same. Next time you need a cup of coffee stop by Robo Esso and watch a robot craft your drink to perfection.

Robo Esso is located at 741 Corporate Circle, Golden. Hours to be determined.