Distractions may seem like a funny thing to focus on — after all, distractions are usually the things that keep us from focusing. But in a new and innovative two-person performance called What Distracts You? the purpose is just that.

Created by experimental dance theater company HOLDTIGHT and produced by local immersive arts company Control Group Productions, What Distracts You? takes place over an hour and a half in the outdoor courtyard of Washington Park United Methodist Church. There are only seven more instances to see the show. The two performers are HOLDTIGHT’s artistic director and founder Gwendolyn Gussman and Black Actors Guild’s Co-CEO Kevin Quinn Marchman.

Marchman and Gussman have worked together in the past on similarly experimental shows under the umbrella of Nourishment — a company that combined dance, performance art, visual art, culinary delights and music into one overall question or theme. Some of those themes have been What Does It Feel Like to Fall in Love and What Does it Feel Like to Grow Up? Although Gussman was moving more in the direction of what Nourishment accomplished — fully immersive experiences that engage all five of your senses — the pandemic made her step back from some of the interactivity between audience and performers.

What Distracts You? is a little bit of compromise. Audience members are always spaced six to eight feet from each other, are required to wear masks and do not come into contact with the performers. But there’s still an interactive element and the intimacy of it all — a small courtyard, no more than 16 audience members at a time, only two performers who look in your eyes — make it feel like a communal experience. Over the course of the three acts, What Distracts You? prompts more questions than it answers, but it will leave you with the distinct desire to answer them on your own. 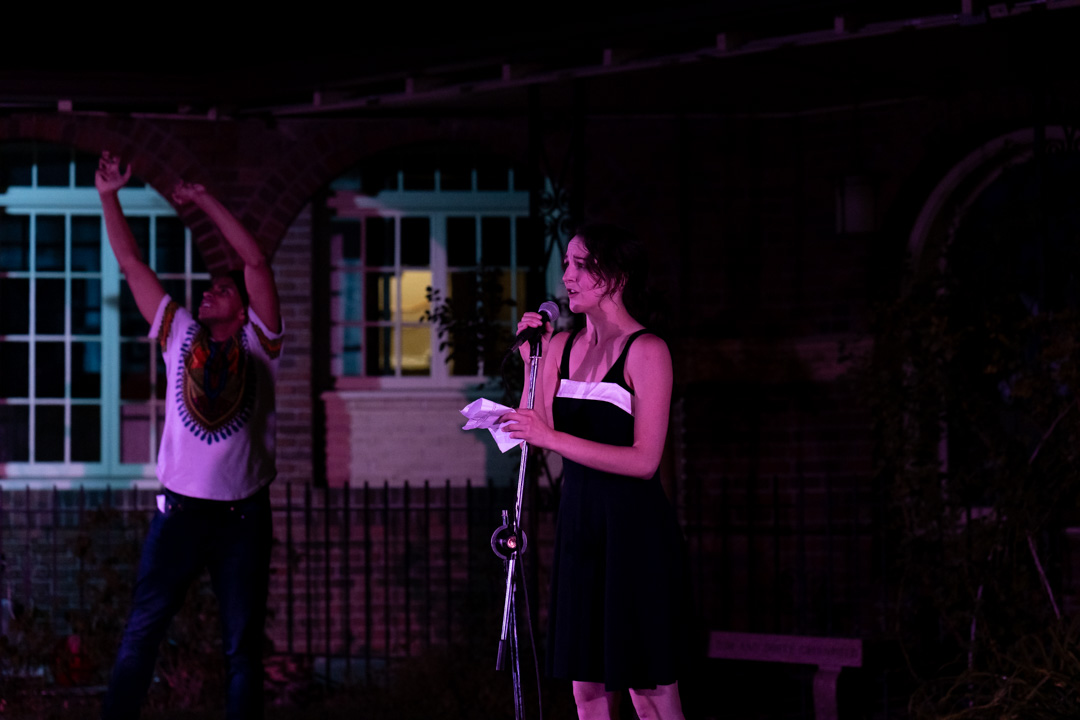 Gussman started thinking about this show after she moved back home to Denver from New York in March when the pandemic broke out. “I started to investigate distraction as a coping mechanism,” she said. “Are there forms of distraction that are taking us away from doing, or being — are there ways that distraction can be a catalyst for change or inner growth? How can distraction be both? And also what are you distracting yourself from? What are your distractions and what are you trying to move away from and towards?”

Over the last six months, distraction has become a familiar thing for most of us. Whether it’s sparked by boredom from long and awkward Zoom meetings for now-remote work or news-fatigue or wanting to keep up with all the news — it’s something that everyone can relate to. But when Gussman thought about the purpose of distractions, she decided there was more to it than simply a lack of focus. Distractions, she started to think, are tools that our minds use to either avoid a topic or keep coming back to it. 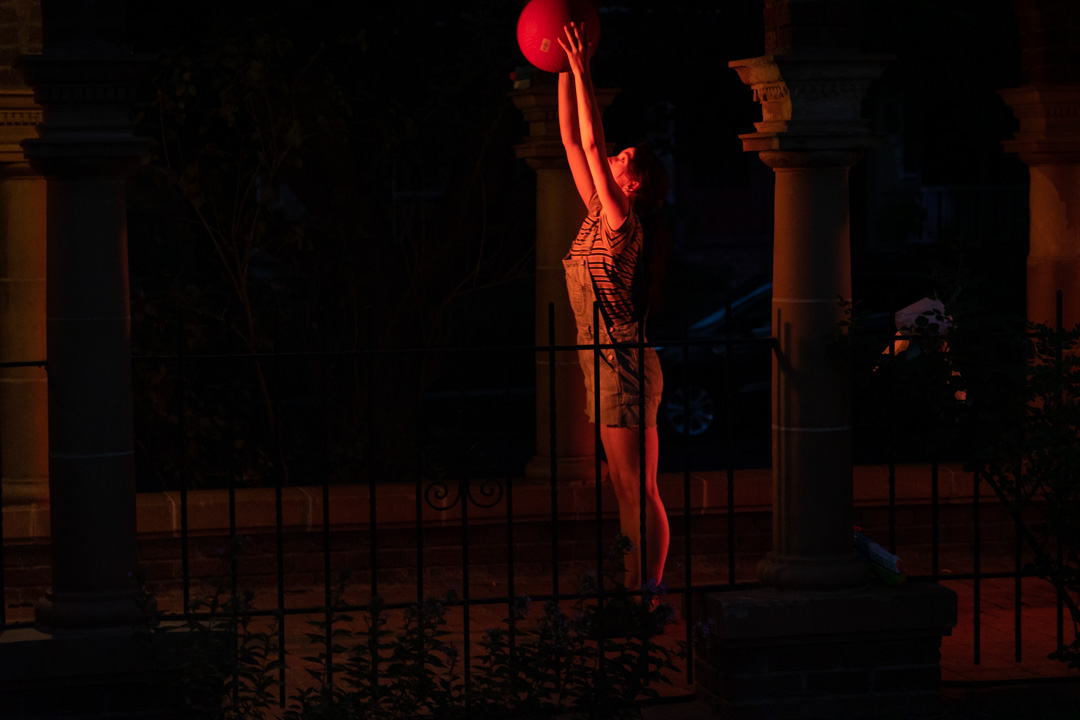 In the show, the first act is spent watching Gussman and Marchman perform frantically, interrupting each other from opposite places in the courtyard, bouncing balls while talking to each other and changing clothes mid-monologue.

The second act is a video (filmed in the courtyard) accompanied by a soundtrack by Grammy-award winning saxophonist Johnny Butler. It’s less scattered than the first act, allowing your mind to wander gently, rather than grasp blindly at concepts as they pass by, hoping for recognition or understanding. It also serves as a transition to the third and final act, where the audience finally hears the full script from each performer without interruptions, allowing them the relief of “oh, this is what they were trying to say the whole time.” 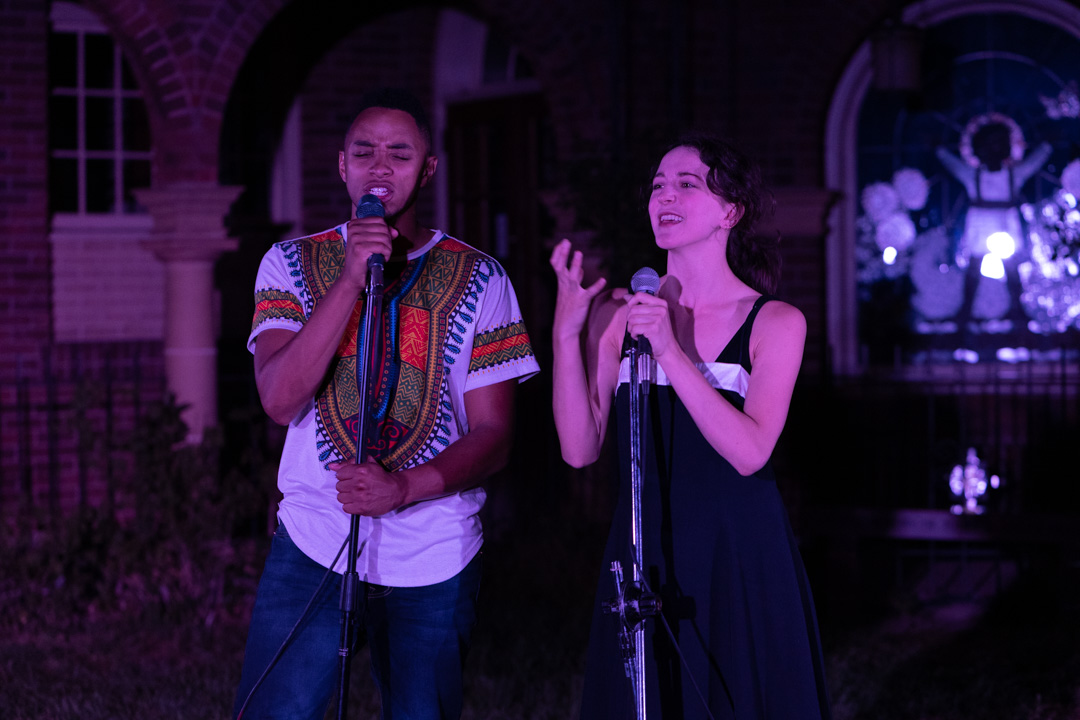 The beauty of the performance is in the subtle paradigm shift from beginning to end. Where it starts with the idea that distractions don’t allow us to process information, it ends with the idea that distractions may allow us the opportunity to explore inward. We come to terms with the fact that the reality we are escaping in the world and the reality of who we really are might collide. We understand that the endless scrolling and 24/7 news cycle is exhausting because we are looking for something specific, but we won’t find it in other people’s social media posts or articles.

“Distraction can be a lot of taking in and no processing,” Gussman explained. The point of the show, then, is to remind you that distractions don’t have to be all ingestion without digestion. Distractions can be mile markers and way finders. Distractions can be the White Rabbit and you could either find a lot of useless dirt or a whole new world.

About the show though, Gussman asks “can we really distract people and then bring them back in? It will be an experiment.” 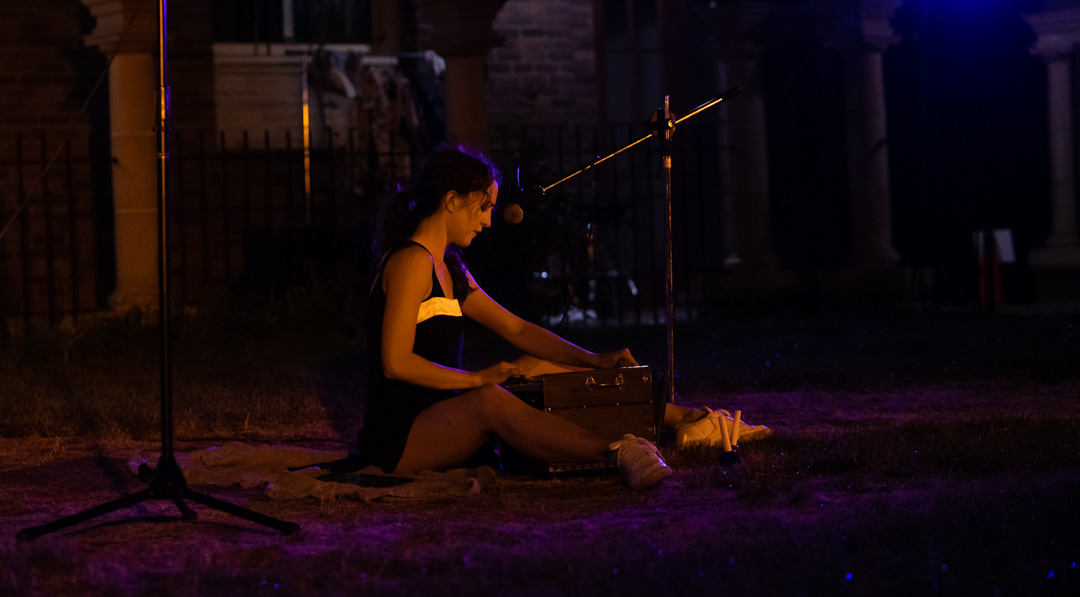 What Distracts You? will have seven more performances until September 19, 2020. Tickets are available here.

All photography by Jade Warner, courtesy of HOLDTIGHT