On the 100-degree afternoon of Saturday, July 11 Denver mainstays Mary Allison Wright and McLain Hedges and Proper Pour alumni Sara Bennett debuted Door Prize. Centered around heaping plates of meats and sides, canned cocktails and natural wines, the concept is a nod to the traditional Southern meat and three, with Wright and Hedges splendidly shaping the evolving menu. While “meat and three” might not ring any bells for most Colorado diners, the term will immediately evoke deep nostalgia for the laidback lunch-counter classics familiar to any enthusiast of Southern cuisine. Launching as a series of pop-ups at Fort Greene, the new project is on course to becoming a brick-and-mortar as soon as the team finds the right location. 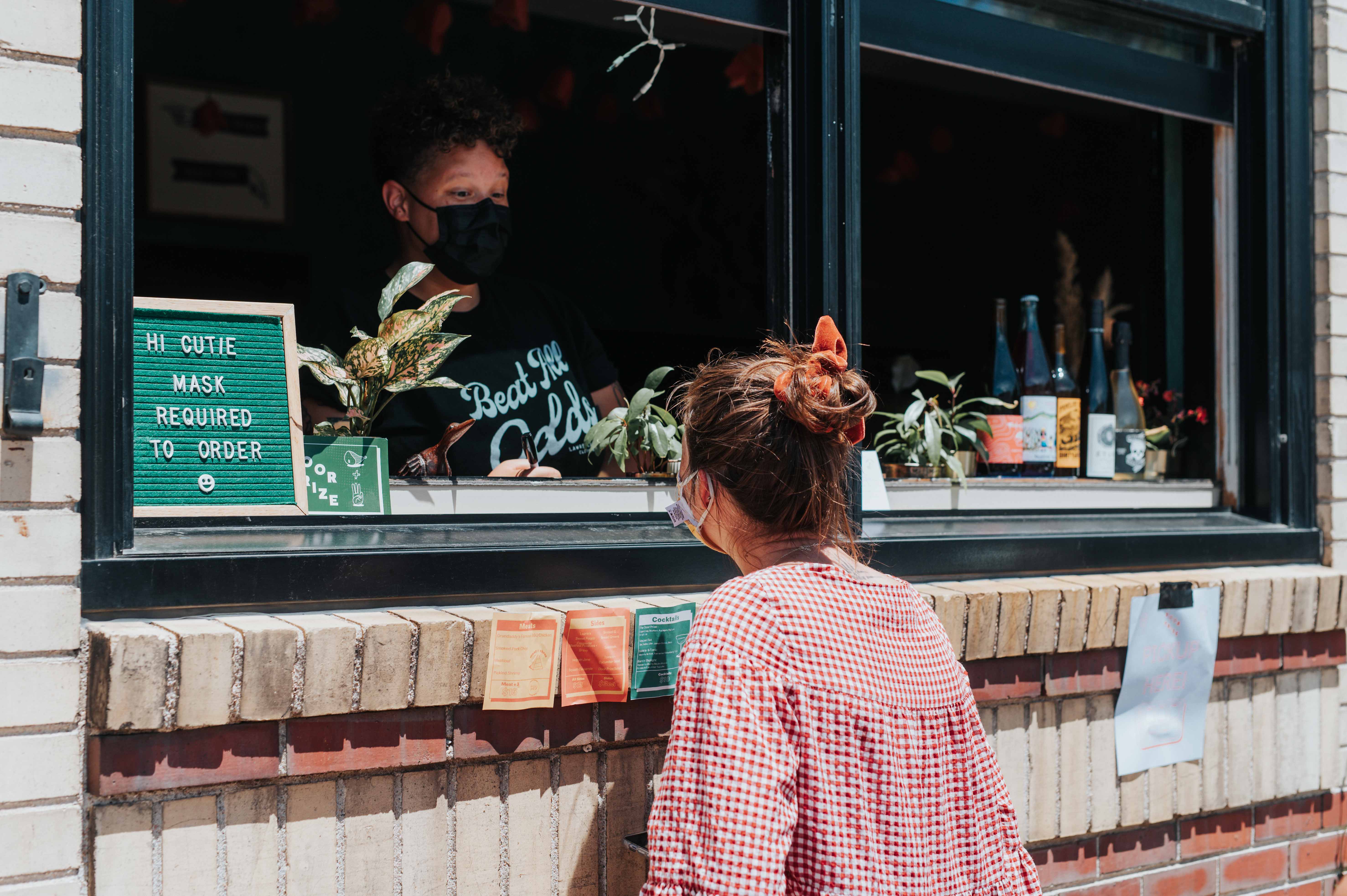 Door Prize delivers both on technique and conceptual underpinnings. “A door prize is something that everybody has an opportunity for,” said Hedges, explaining that at its core, the restaurant has been designed in the interest of lifting everyone’s voices up. In its current model, food is sold pay-what-you-can, with all proceeds benefitting Black Women’s Blueprint — an organization committed to amplifying Black women’s voices within social justice movements. “All of the food we will be serving is due to Black women, much of which is largely unrecognized,” said Wright. Drinks — including four of Hedges’ original cocktails and wines from Benny and Zoid Selections — are dispensed at a fixed price to benefit staff. “It speaks to how we like to eat and how we like to feed people. Selfishly we wanted to feed ourselves, unselfishly we wanted to feed everyone else,” laughed Wright.

Prior to the near-decade spent in Denver restaurants, Hedges and Wright worked as independent concert promoters out of Atlanta and their native Chatanooga. “How can we bring better hospitality to the guest and the artist?” said Hedges, displaying an early commitment to making people feel welcome. After a move to Denver in 2012, the couple opened Proper Pour in 2013 in The Source, serving natural wines and rare spirits even as the city’s craft cocktail scene was still emerging. In 2014 they opened Rino Yacht Club, utilizing The Source’s central bar to further their exploration into unconventional cocktail-making. In 2017 Hedges acted as the beverage consultant at Annette, with 2018 seeing the duo helm the beverage program at Morin — Hedges developing cocktails and Wright acting as wine director. Bennett — a graduate of Alden and Harlow in Cambridge, Massachusetts — joined the Door Prize team as a partner and director of operations.

The scene on Saturday was a lively affair. The few lucky customers who arrived early quickly filled the limited patio space, where Big Bloom Energy — a collaboration between Lettuce’s Eric “Benny” Bloom, Hammond B3 organist Tom Amend and drummer Alejandro Castano — serenaded the crowd with nearly two hours of jazz, blues and jokes about their pre-COVID careers as rockstars. A long line — made longer by the crowd’s commitment to maintaining distance — stretched down the block, with a few patrons assembling their own table to dine protected beneath the shade across the street. “We figured it would be really fucking cool, even if it was just for pickup, to have live music,” said Hedges. The concert-starved crowd, both seated and in line, buzzed — subdued only by the beating sun.

The food — a collaboration between Hedges and Hop Alley sous David “Mary Junior” Wright — has all the comfort of home cooking, fixed with a dexterity that nicely highlights the duo’s obvious chops. Rotating staples — including Grandaddy’s Famous BBQ Chicken, smoked pork chop, meatloaf and pickled shrimp — provide a solid anchor for the picnic-ready fare. “This food lends itself to taking it to go,” said Wright. Sides range from the generally recognized — mashed potatoes and gravy, squash casserole and succotash — to more obscure Southern delicacies, most notably the Hoppin Jane, a peas and rice dish made famous in the Carolinas. Desserts are a major feature — genuine hospitality distilled in the form of dirt sundaes, Atlantic beach pies and a jamboree cake. Watermelon and housemade “Koolaid” — a powder dip made from a base of dehydrated fruit — have been carefully crafted as a healthy treat for sunstruck kids.

Despite the obvious challenges of opening a new restaurant during a pandemic, the team appears unphased. “Why sleep on this downtime that we have?” said Hedges. Pop-ups are set to continue through the end of July, with a planned hiatus in August. Door Prize is set to solidify Hedges, Wright and Bennett as the multifaceted hosts they’ve spent almost a decade confirming.