All photos courtesy of Spice Trade.

After years of brewing beer out of Arvada’s Yak & Yeti brewpub, Spice Trade Brewing welcomes guests to the brewery’s new flagship location in Greenwood Village. Co-owner and head brewer — Jeff Tyler — began brewing beer out of his home in Boston while working as a mechanical engineer and moved to the Denver area in 2016 to take his passion for beer to another level. Shortly after moving, he replaced Adam Draeger as head brewer of the Yak & Yeti brewpub in 2016 and managed the rebrand to Spice Trade Brewing — with co-owner Dol Bhattarai — throughout 2017. After that, he began searching for a new space to expand the brewery and began building out the new space about a year ago. The new flagship production facility and brewery opened on May 26 and is now welcoming customers for dine-in service.

Tyler’s thoughtful approach to brewing beautifully intertwines beer and food. By merging the fresh ingredients and bold flavors of international street food with beer — and vice versa — he creates unique flavors that aren’t found in your typical lager — or in your typical pretzel.

“We brew beers inspired by culinary ingredients from around the world to showcase cultures through their flavors,” Tyler said. Examples include the Sichuan Saison which is inspired by Chinese flavors like Five Spice, Sichuan peppercorns and orange while the Cured Sumac Saison is a single origin beer brewed with cured sumac from Gaziantep, Turkey.

But not all of them are strictly international — Scarlet Giant is a sour gose brewed with coriander, Utah rock salt, key limes and hibiscus fermented with wild yeast cultured from a hibiscus flower from Denver’s own Botanic Garden. While Tyler likes to focus on adventurous beers, he also brews approachable styles like New England style IPAs, West Coast IPAs and pilsners. In Spice Trade’s new space Tyler will be able to produce up to 3,000 barrels of beer — that’s more than four times as much beer as he was able to brew in the Yak & Yeti brewpub and at offsite locations last year. 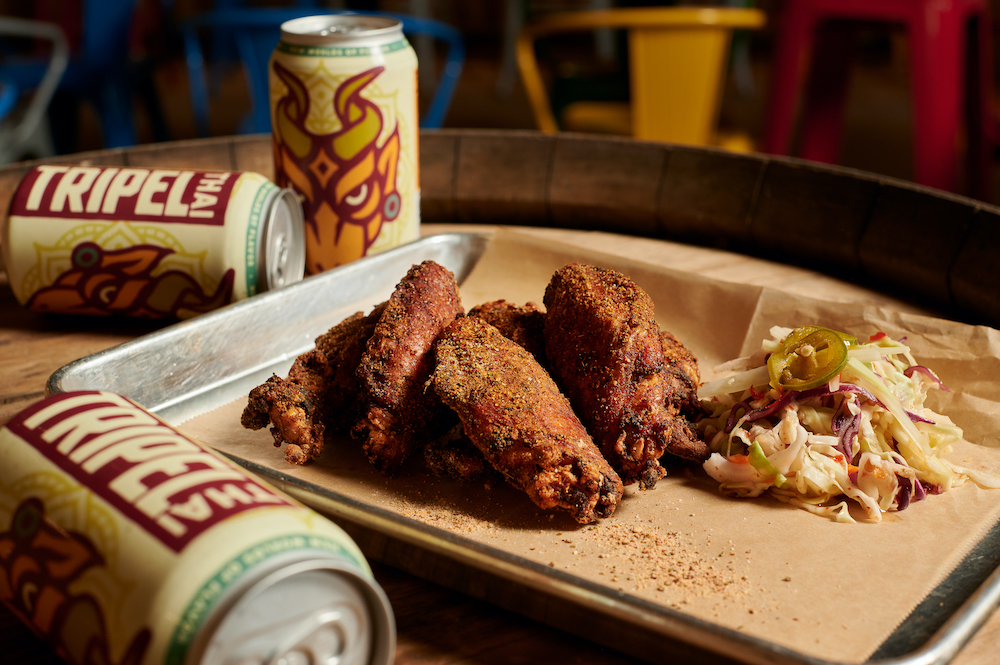 One of the most appealing things about Spice Trade is that it’s not just a brewery — they have an incredible culinary program, too. When Tyler was developing the concept he ate at many food trucks around Denver looking for quality food that shined through. He came across J Street — a food truck that parks at breweries and office parks around the city — and after just a few bites of the massaman curry he found what he was looking for. He reached out to Jason Bray — the co-owner and head chef at both J Street and Hunje and he developed the culinary program for Spice Trade. Tyler said Bray made the best massaman curry he’s ever had, “they don’t cut any corners, they ferment their own hot sauce and make their own kimchi, everything is done correctly and you can taste it,” stated Tyler.

Bray created an array of international dishes that are approachable yet delicous. The menu includes classics like a short rib burger, fried chicken sandwich, Thai green curry and Midsummer Night’s pasta as well as more eccentric options like watermelon tomato poke salad and Korean BBQ tacos. You’ll also find that Bray uses ingredients from the beer in some of dishes.

The spent grain soft pretzels — a must have — use spent grains from the brewery in the dough as well as jalapeño pilsner in the cheese. The pretzels have the sought-after texture of crispy on the outside and doughy on the inside and act as the perfect vessel for carrying the rich, warm cheese dip.

Now that the brewery is open for dine-in service it’s the perfect time to relax on the patio and enjoy some brews. Get a little adventurous with your beer choices and try something out of the ordinary — or order a glass of wine or the house-made, non-alcoholic seltzer infused with fresh basil and lemon juice — whatever your choice is, it’s sure to help you beat the summer heat.