As the reality of racial inequality continues to make its way to the forefront of people’s minds, some people within the community are taking steps to utilize their platforms to promote people of color who oftentimes are excluded from the spotlight.

Denver’s drag queen community is one such area that feels the overbearing and unjust preference for predominately Caucasian performers, so Denver drag veteran Felony Misdemeanor decided to do something about it. Wrangling some of Denver’s most iconic and emerging drag queens of color,  Felony Misdemeanor, born Kenneth Theariale St. Cyr Stallings, is set to host Denver’s first all-black online drag show, called Black Diamonds. The ensemble cast will perform all together virtually (as much as together can be during these COVID-19 times) on Sunday, June 21 in honor of Pride Month and the Black Lives Matter movement. We had the opportunity to discuss with Felony Misdemeanor the upcoming performance as well as her drag roots and the importance of highlighting performers of color.

303 Magazine: When did you first get involved in the drag scene?

Felony Misdemeanor: I’ve been involved with the drag scene for 20 years in September.

303: What made you get involved in the first place?

FM: It just happened by chance. I was hanging out with a good friend of mine in El Paso. He was a manager of one of the local gay bars. He was having a birthday party and wanted some drag queens to perform and he just asked me to do it because one of the queens that were supposed to perform dropped out.

303: How did the Black Diamonds show come together?

FM: Well, that came together because of the circumstances, you know. There were some shows going on and I didn’t see any black girls on a lot of the flyers. So I was like, well I will go ahead and do it — I’ll put together a digital-only show of all black queens. We do have person of color shows that are produced here in town, but you know, they aren’t really supported by the white audiences. I know that Denver wasn’t really asking for it, but they are now, which is weird.  I just wanted to put it out there in the forefront and say, well, even if you don’t want it, and even if you do want it,  here it is. We’re underused. Look at all these fabulous, beautiful entertainers that are so talented, but just so poorly used. 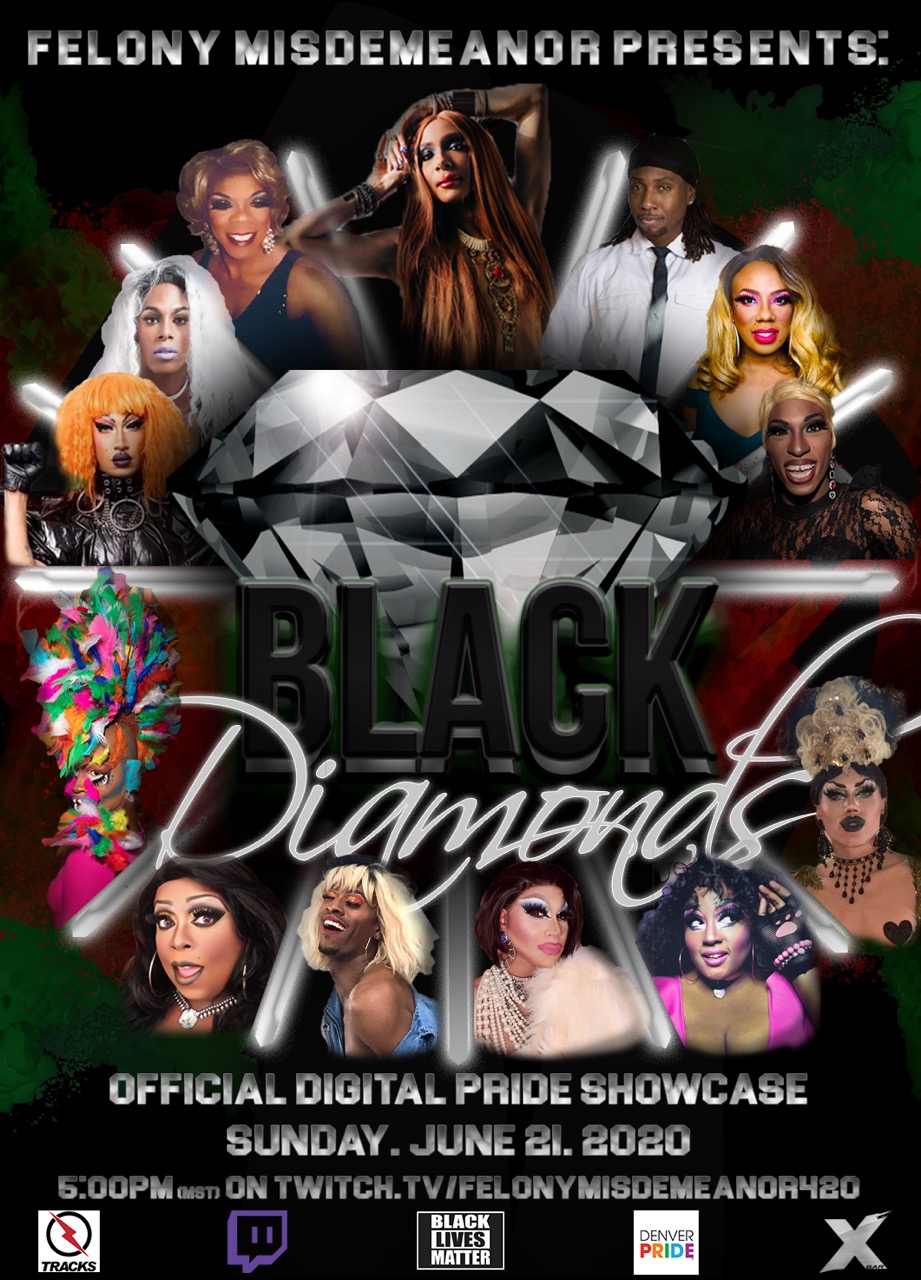 303: What do you hope people take away from the Black Diamond showcase?

FM: I hope to bring my Black brothers and sisters to a wider audience that they haven’t had before. I’ll be honest, I have a following and so I want to use this platform that I have to showcase my brothers and sisters who don’t necessarily have the platform that I do. I want to give them a pedestal to shine and be their most authentic Black self. I hope to prove that here we are, we’re Black, we’re beautiful and don’t be afraid to use us just because you’re not used to us.

303: How were you able to garner the following that you do have?

FM: I was lucky to have been in the game long before drag was popular. I came to Denver in 2003 and I immediately started competing for Miss State Colorado. I put myself out there – it’s hard work. So, you know, just me constantly doing shows and keeping my good name out there, doing good work out there and just keeping my name in people’s mouth, in people’s brains, but in a positive and professional way. It’s longevity — I had to work hard for them for this name that I have for myself. I worked my ass off for this.

303: In a larger sentiment, why do you think Black queerness isn’t pushed in a lot of mainstream narratives about queer life?

FM: Well a principal reason is everything is run by white men and they determine what audiences want to see. They don’t live Black gay lives, so they’re not gonna put Black life out there for us to see. From Hollywood to locally owned shows and shit like that, it’s all white. If I were to make a show I don’t know how to make a white show. It would be another Living Single, which is where Friends came from by the way.

303: What do you really focus on when you are producing a Black drag show and trying to get the feel for showcasing the queens?

FM: Well, I’ve noticed that Black performers are told what they can and can’t perform, so that’s not going to be one of my things. I will never tell one of my artists that they can’t perform this song or they can’t be that unless it violates some kind of law or something like that. But, I want my cast to do the “Black songs’ that they couldn’t do before for the commercial audience. I just want my girls to be unapologetically Black and they want to go out there and do Britney, that’s totally fine too. I just want them to be their authentic selves because there are some songs that would not go over well with the mainstream that is here in Denver, Colorado.

303: What’s inspired you recently to really, not only do the Black Diamonds showcase but to also let black drag voices be heard?

The Black Diamonds Showcase will be held this Sunday, June 21 on Twitch.tv/felonymisdemeanor420 starting at 5 p.m. with a limited viewing at X Bar at the same time. The show will feature Felony Misdemeanor, along with Miss Zarah, Lee Lee the Twirling Goddess, Shiksa Mess and many more.