The Lumineers/ Photo by Kyle Cooper

The Lumineers have come together with other Colorado heavy hitters for a benefit concert to provide aide for restaurant workers and the national music community. The aptly named Colorado Gives Back live-stream concert will include performances from The Lumineers, Nathaniel Rateliff and OneRepublic to name a few. Former Governor John Hickenlooper, current Governor Jared Polis, as well as former NFL star quarterback Peyton Manning, are some of the other special guest appearances.

The benefit concert will donate proceeds to both the Colorado Restaurant Association and to the Recording Academy’s MusiCares. Spotify’s COVID-19 Music Relief project will match donations to the MusiCares project dollar-for-dollar of up to $10 million dollars.

“In addition to raising money for Colorado restaurant workers, we as Colorado musicians wanted to raise money to not only support our local crew that we tour the world with but also all the folks in the music business as a whole – from the venue workers to fellow musicians. MusiCares once saved us when we were robbed in 2011 by helping us buy back our stolen instruments when we were an unknown band. So anyone from a sound guy who needs dental work to a stagehand that needs a medical procedure – this fund is for the people that make up the music business and are in need of financial help. We hope that this can help those that are struggling to get by to see the other side of this – when the touring starts up again and the crews and venue workers, the lifeblood of the music business, finally can get back to work,” said Wesley Schultz of The Lumineers. 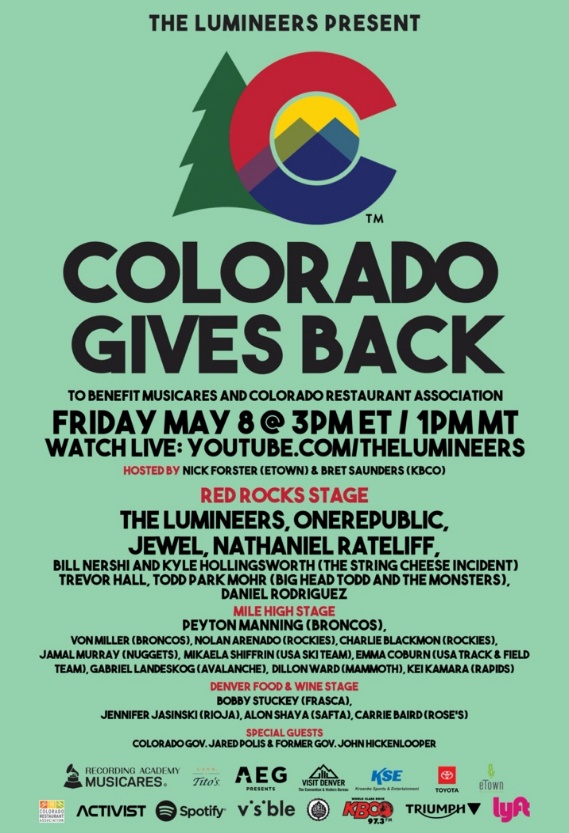 The live-stream concert will air on The Lumineers’ Youtube at 1 p.m. MST