A Cheap Traveler’s Guide on Visiting Seattle From Denver

Hipsters and coffee aficionados have been singing Seattle’s praises since the ’90s, so we don’t really need to tell you to go. The only question is, when will you finally book the trip? The good news is that direct flights to Seattle from DIA are only two hours long, so you can plan a pretty quick weekend getaway. Plus, it’s not expensive either to enjoy the grungy dive bars, cozy coffee shops, beatnik boutiques and eccentric eateries that make Seattle a mecca for edgier travel enthusiasts. Here’s a guide to visiting the Emerald City without burning through your savings account. 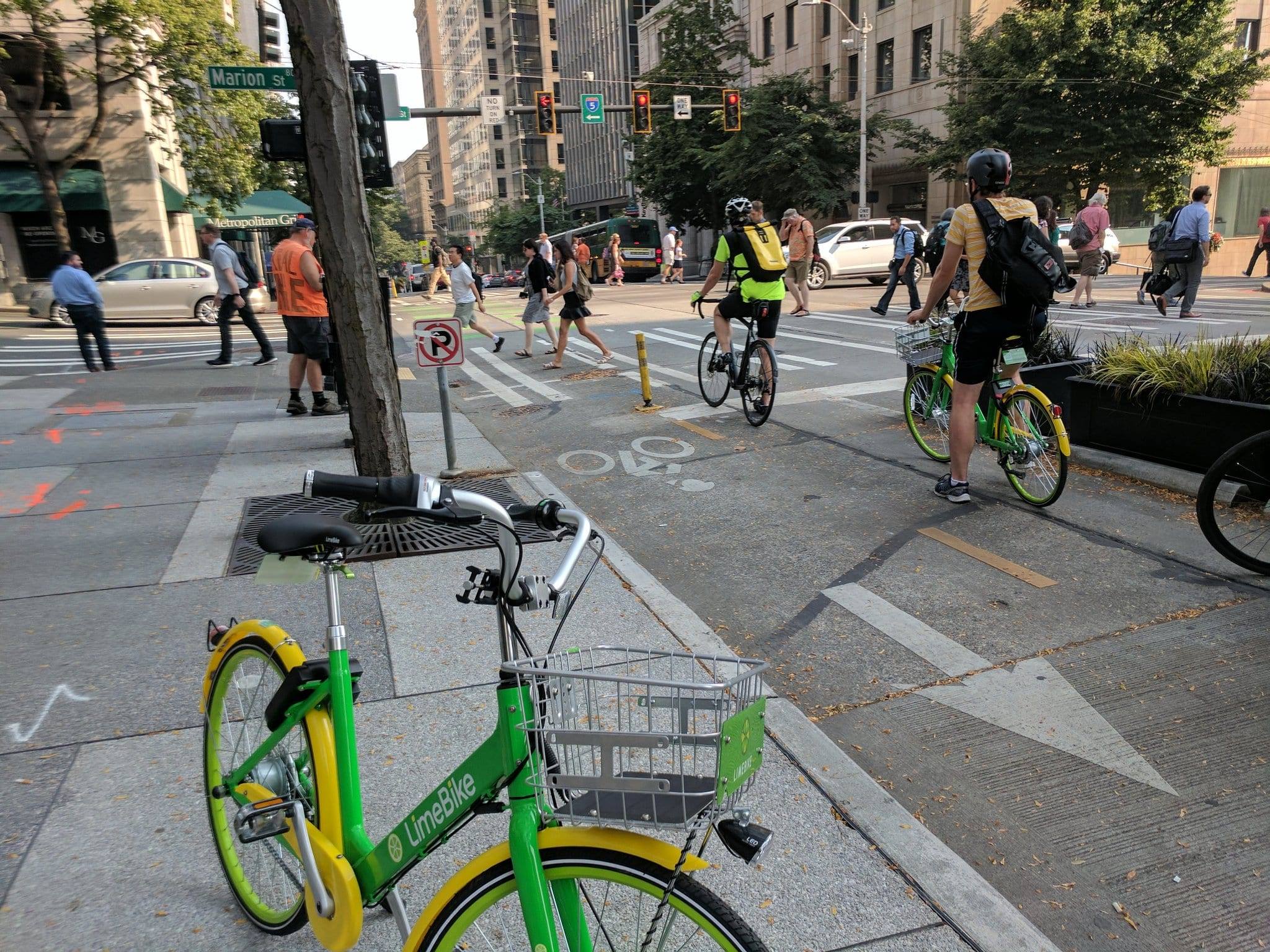 Photo courtesy of the Seattle Department on Transportation on Facebook.

Finding a cheap flight to Seattle from Denver is almost as easy as finding one to Vegas. Airlines such as Delta, United, Frontier Airlines and Alaska Airlines make frequent direct flights to the Emerald City and fares run as low as $97 round-trip (that’s only $48.50 one way). Getting a last-minute flight won’t break the bank, but just imagine how much you could save if you planned this trip months in advance.

Seattle is savvy when it comes to public transportation, so unless you want to explore national parks or leave the metro area, you won’t need a rental car. Grab an ORCA card for $5 at SeaTac Airport and load money on it for buses and trains. Each ride typically costs $2.75, but if you want daily unlimited rides, it’ll cost $8. If the weather is nice, you can also rent LimeBikes or JUMP bikes around the city that you can reserve through Uber. 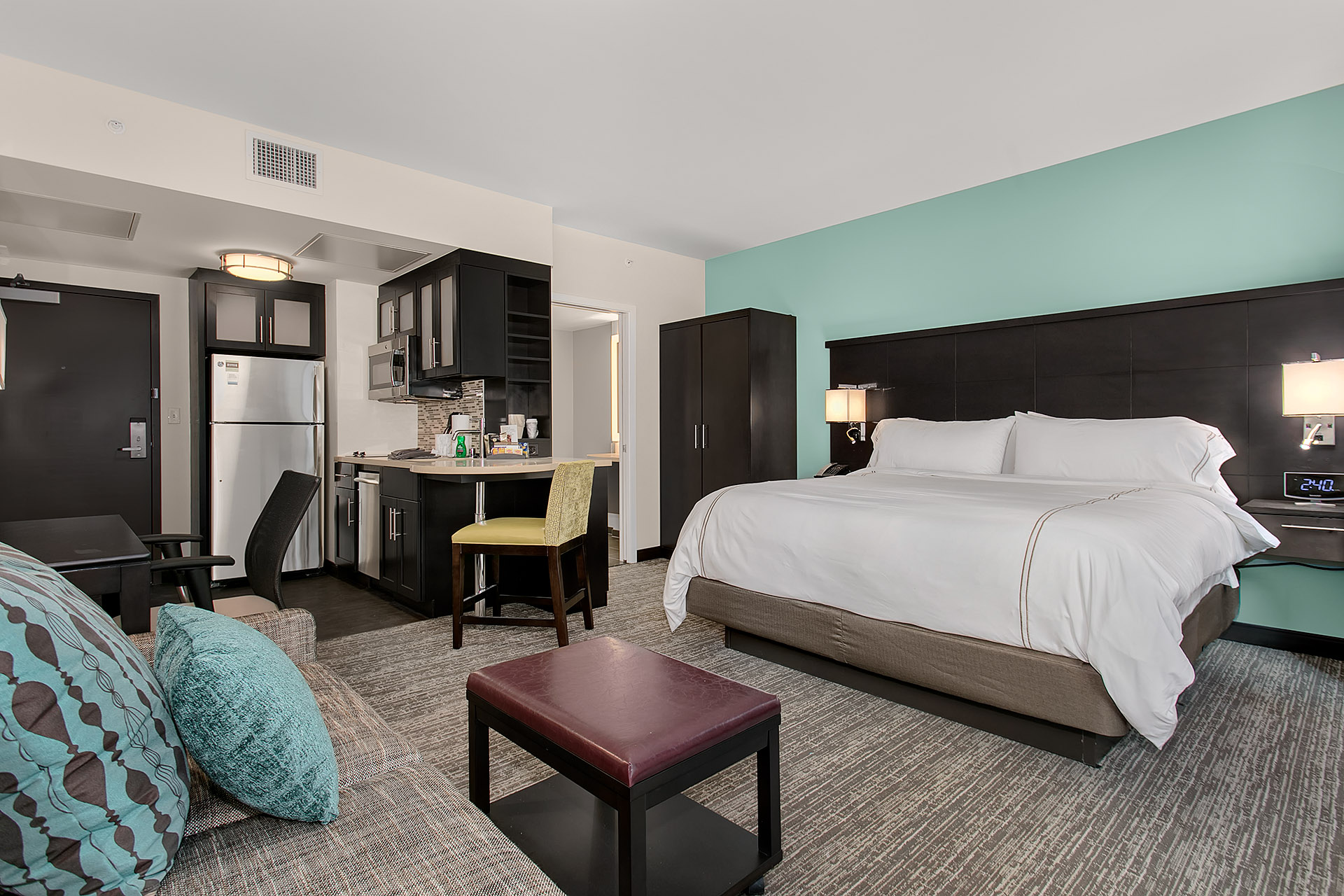 The Lowdown: Staying in the heart of downtown Seattle can be a bit pricy, but Staybridge Suites’ South Lake Union location is close to the action with the Space Needle, Pacific Science Center, Museum of Pop Culture (MoPOP) and The Museum of History and Industry within walking distance. It’s clean, comfy and quite affordable with a full kitchen and all of the modern amenities you’d expect from a brand-name hotel without the burdensome price tag. 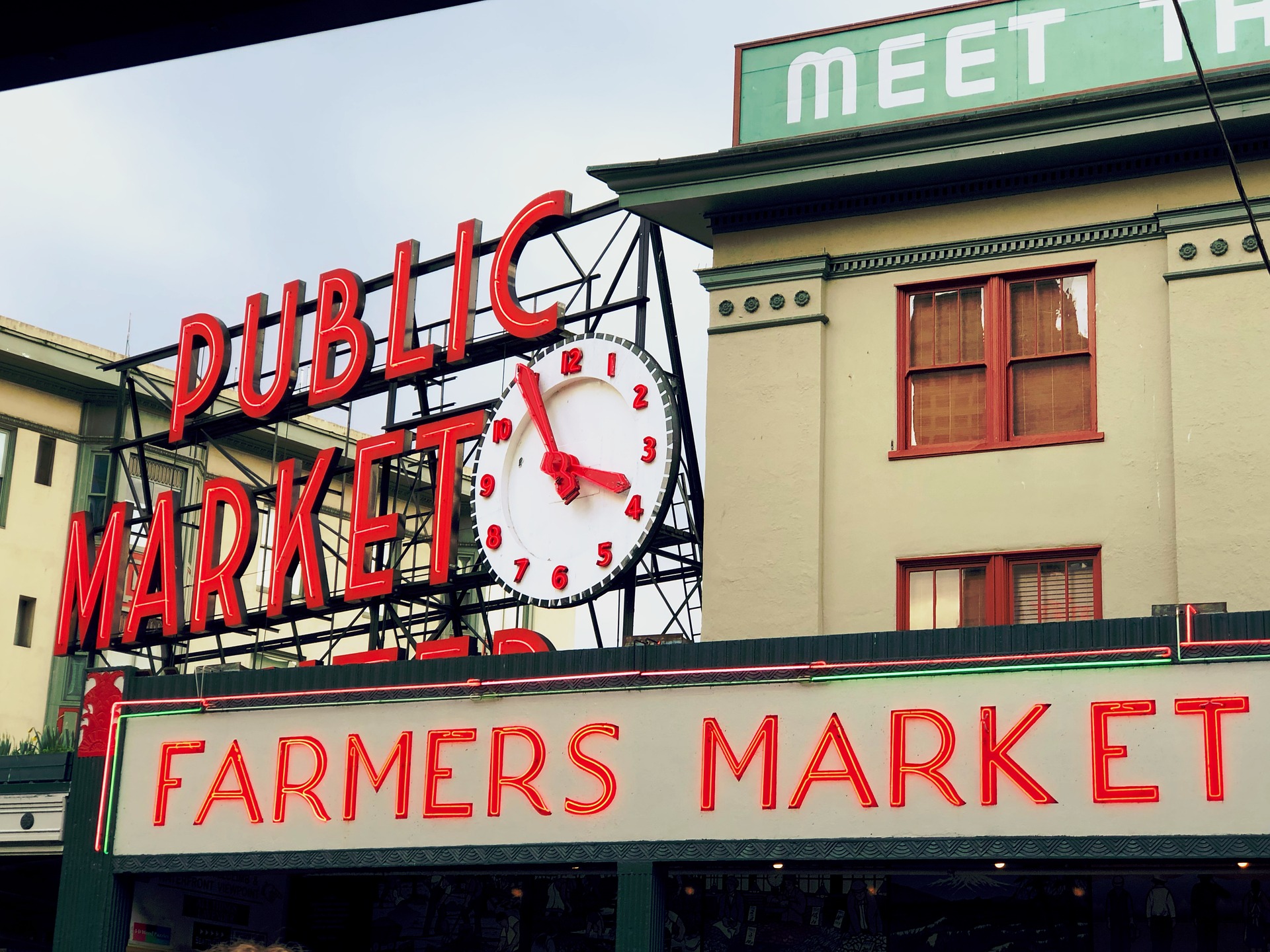 The Lowdown: Well, Pike Place Market is no secret to Seattleites and tourists alike, but if you end up with limited time to spend in the Emerald City, make sure you don’t skip it. Home to the one of the first Starbucks (it’s actually not the original location, but it still is historic), the famously grungy “gum wall,” and that iconic red neon sign and clock shrouded in fog, Pike Place Market is an obvious photo-op, but don’t leave without exploring the hidden alleys and lower levels of shops filled with antiques, maps, books and oddities. And don’t forget to try the samples. Try chocolate-covered cherries at Chukar Cherries, cheese curds at Beecher’s Handmade Cheese and the best Greek yogurt of your life at Ellenos Yogurt — are all for free along with other treats. 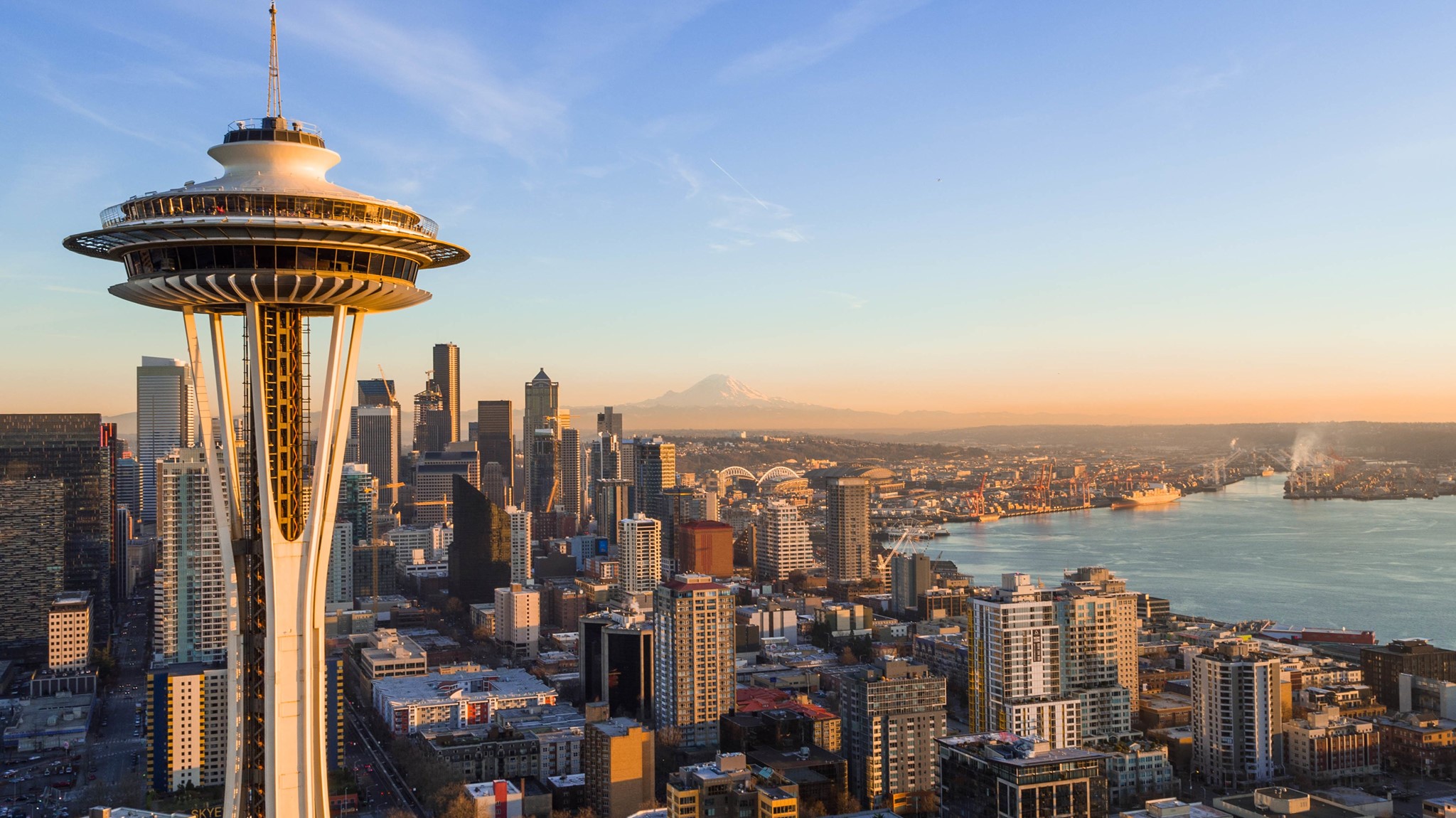 The Lowdown: It might seem like a no-brainer, but the going up the 605-foot Space Needle is pretty neat. Unlike the Empire State Building or the One World Trade Center Freedom Tower, lines to ride the elevator are seldom long. Built for a debut at the World’s Fair in 1962, the Space Needle offers visitors insane panoramic views of Mount Rainier and beyond, but also an interesting historical exhibit about the Space Age. 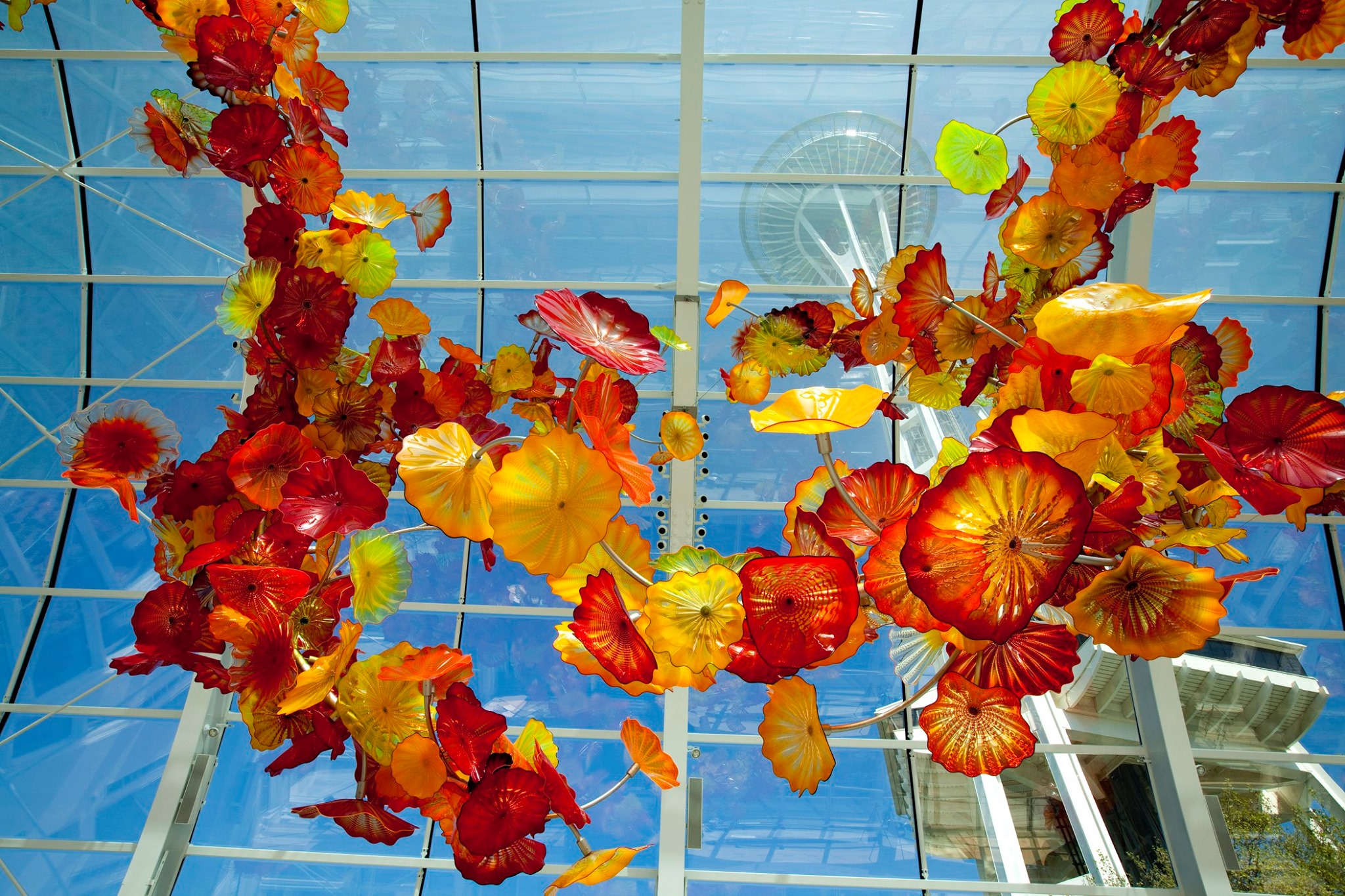 Photo courtesy of Chihuly Garden and Glass on Facebook.

The Lowdown: If you plan on visiting the Space Needle and have room to pay a little extra, Chihuly Garden and Glass is located beside it. Born in Tacoma, Washington, artist Dale Chihuly received a Fulbright scholarship to learn glass-blowing techniques at the Venini glass factory in Venice. His experience in Italy resulted in the mesmerizing, plant-like formations on display at the indoor and outdoor museum with his namesake. 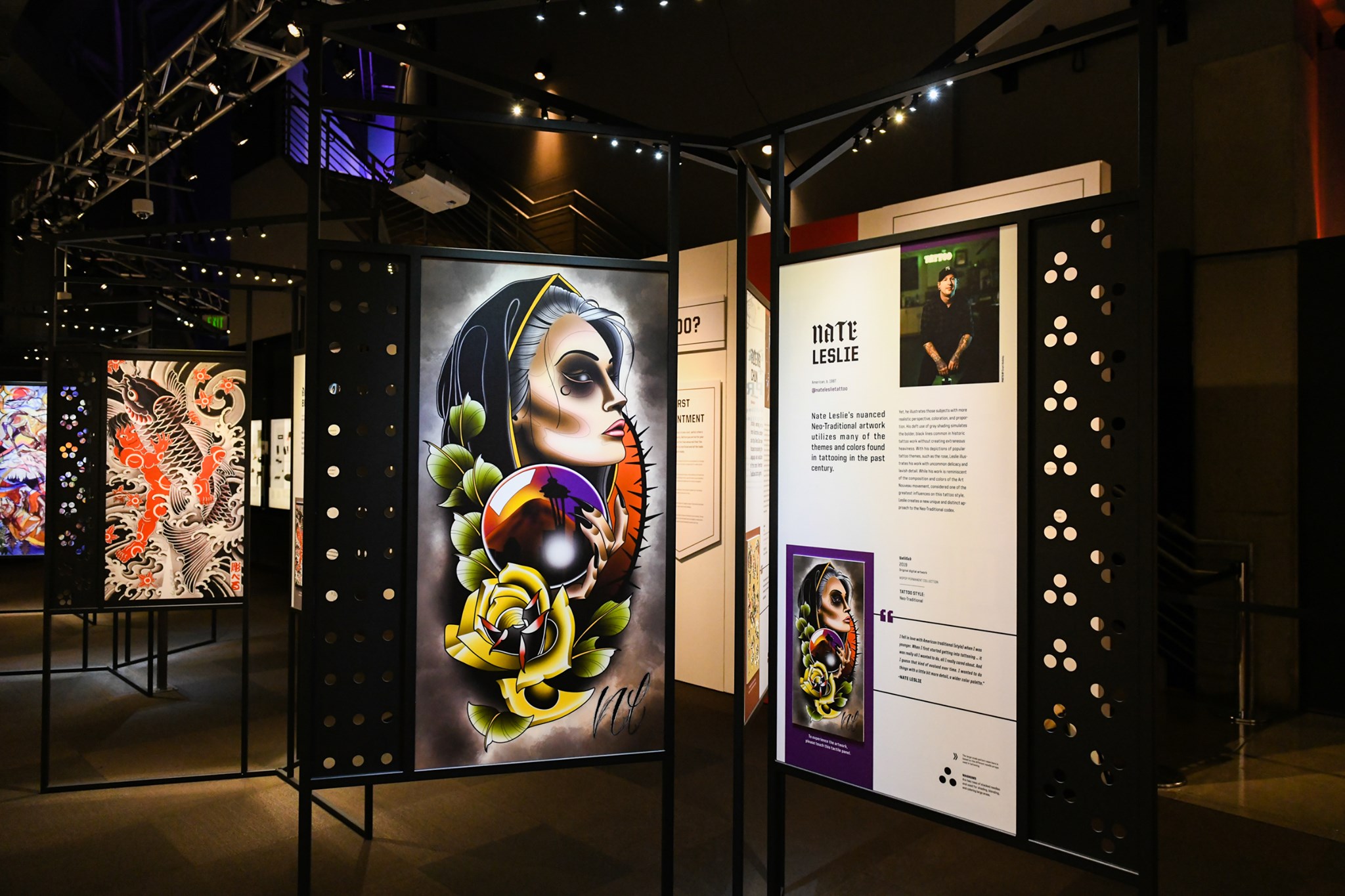 Photo courtesy of the Museum of Pop Culture on Facebook.

The Lowdown: Seattle would have a Museum of Pop Culture, so make sure you check it out. Also known as MoPOP, the museum has permanent exhibits on tattoo culture, the bands Nirvana and Pearl Jam, horror films, sci-fi, fantasy and much, much more. There’s also a rotating exhibit on the popular game Minecraft to celebrate its 10th anniversary with life-size creatures and visual and audio effects to make you feel like you’re inside the game itself. 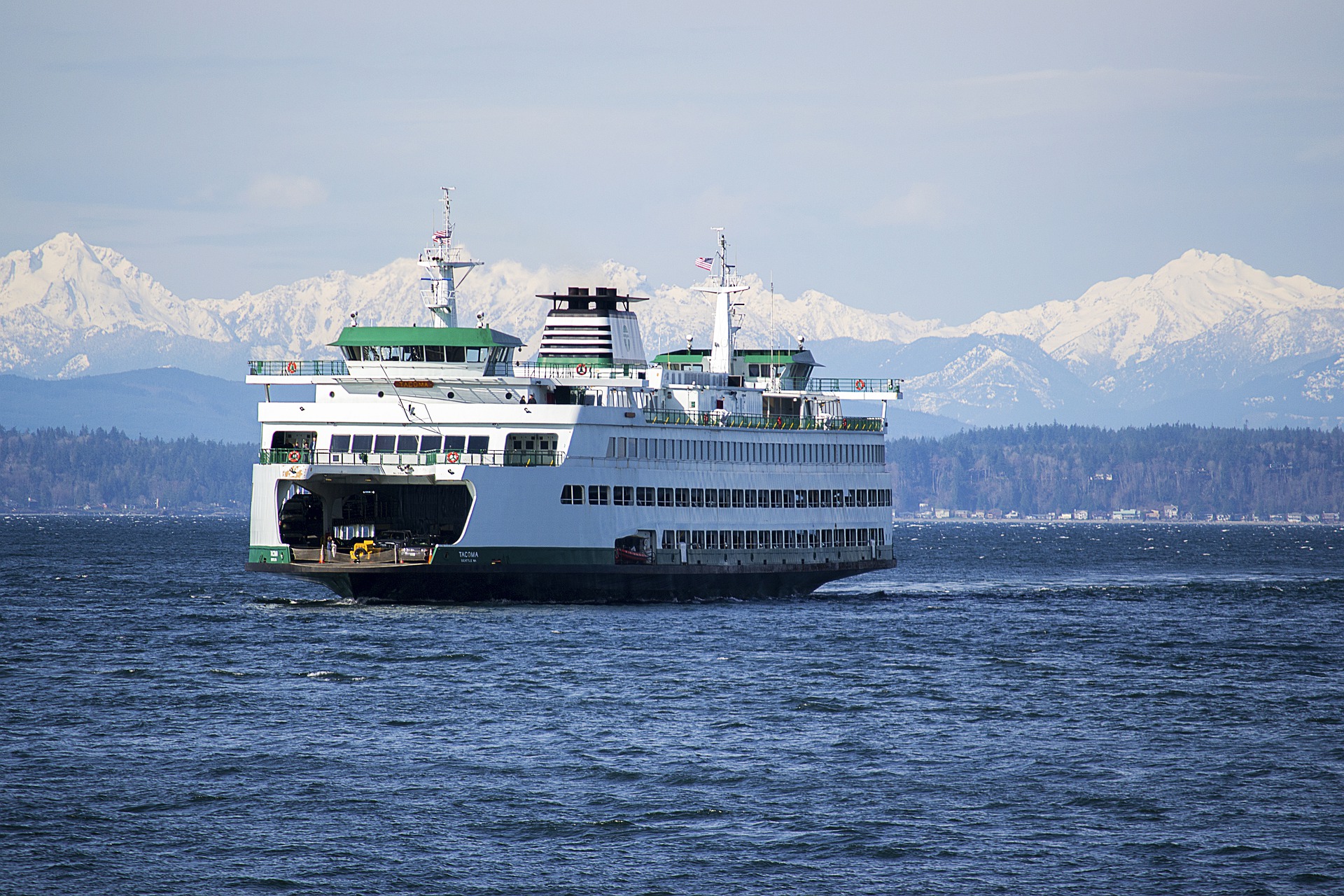 Where: Take the ferry from Seattle Ferry Terminal
Cost: $8.50 round-trip per adult

The Lowdown: Exploring the city sights of Seattle sure is fun, but if you’ve got a morning or afternoon to spare, don’t be afraid to get out on the water. Ferries run daily from Seattle to beautiful Bainbridge Island and a round-trip ticket doesn’t cost much. Grab a cup of coffee and wear a warm coat as you watch the Ferris wheel and Pier 55 attractions fade into the distance. When you dock at Bainbridge, you’ll find the island’s a little sleepy with only a handful of shops and cafés, but walking along the marina is a relaxing pastime when you need to get away from it all. 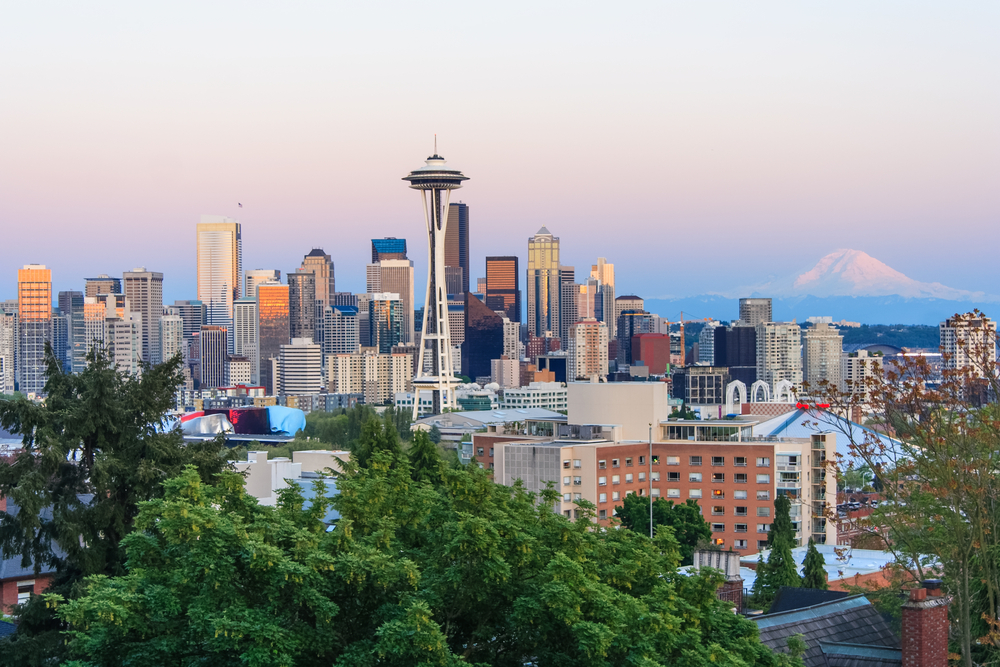 The Lowdown: Viewing the iconic Seattle skyline with Mount Rainer peeking through in the distance is a challenge on a foggy day, but if you’ve got clear skies in the forecast, make sure you head to Kerry Park. Located in the quieter, residential neighborhood of Queen Anne, the park is the perfect place to sit on a bench and take in the cityscape. 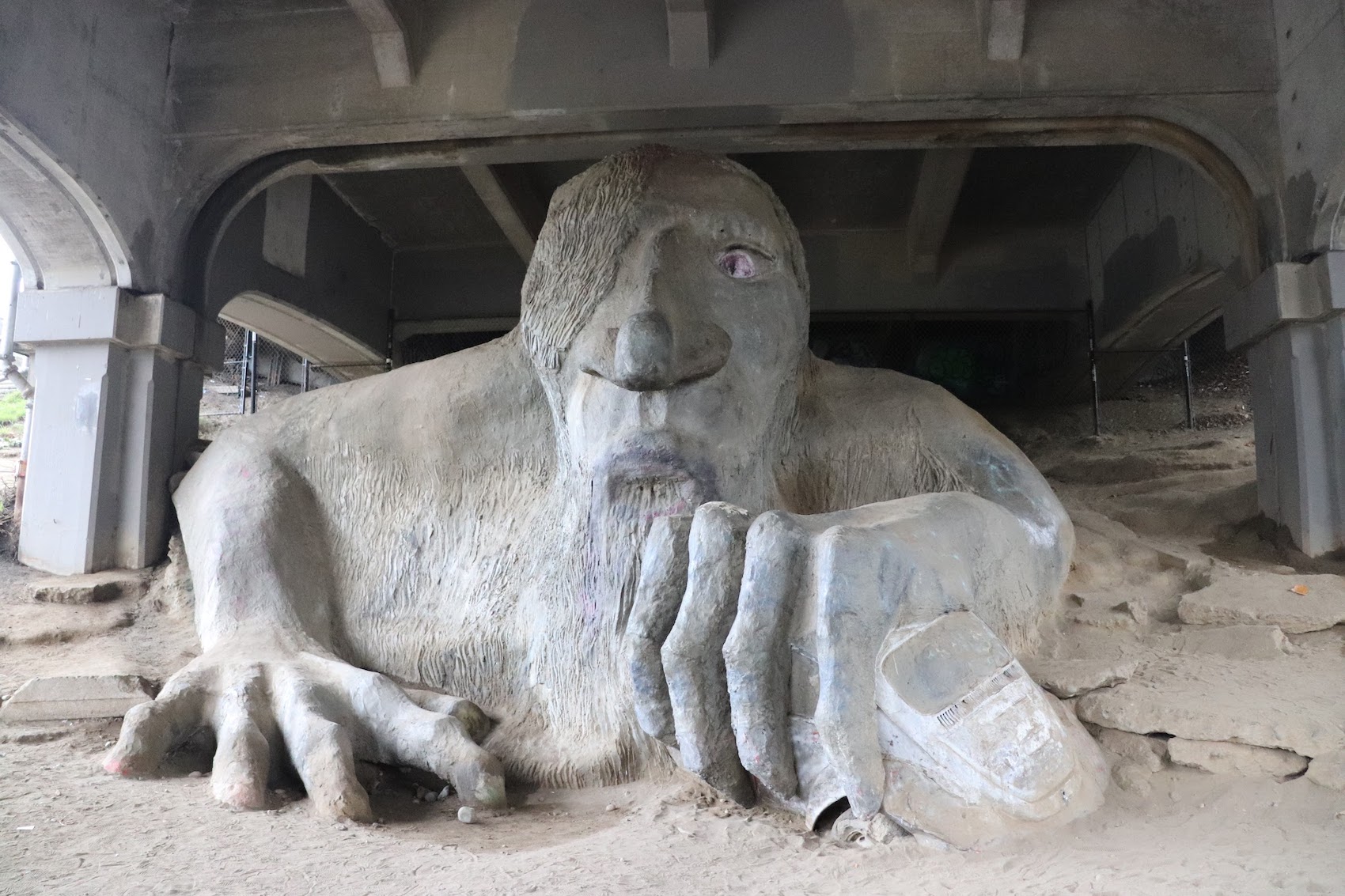 The Lowdown: Beneath the Aurora Bridge in the Fremont neighborhood of Seattle, you’ll stumble upon a sculpture seemingly straight out of the folktale “Billy Goat’s Gruff.” Erected in 1989, the Fremont Troll was designed by sculptor Steve Badanes, who won a competition to create public art under the bridge that would deter drug dealing and dumping trash. Thus, the troll was born. He’s an impressive 18 feet tall and is made from steel, wire and two tons of concrete. 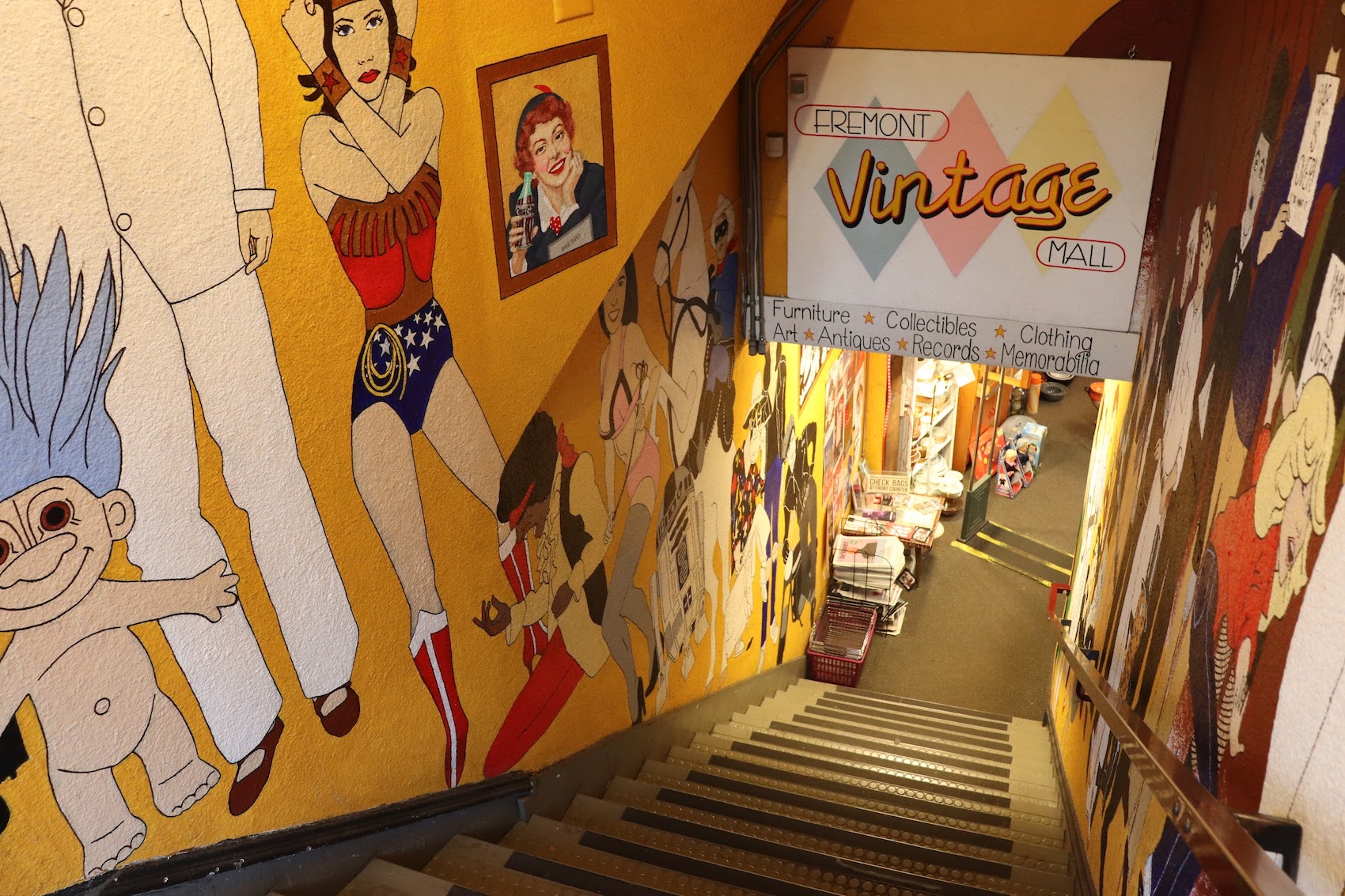 The Lowdown: Although you’ll find lots of edgier thrift shops in the famous Capitol Hill neighborhood, artsy Fremont is worth wandering through after you get your picture with the troll. With numerous coffee shops, boutiques and eateries, you’ll have lots to do, but save an hour or two for the shopping inside the Fremont Vintage Mall. This downstairs hideaway is home to collectibles, vinyl, art, clothing, stationery, books, jewelry and more from decades past. It’s a massive collection and an absolute must-see. 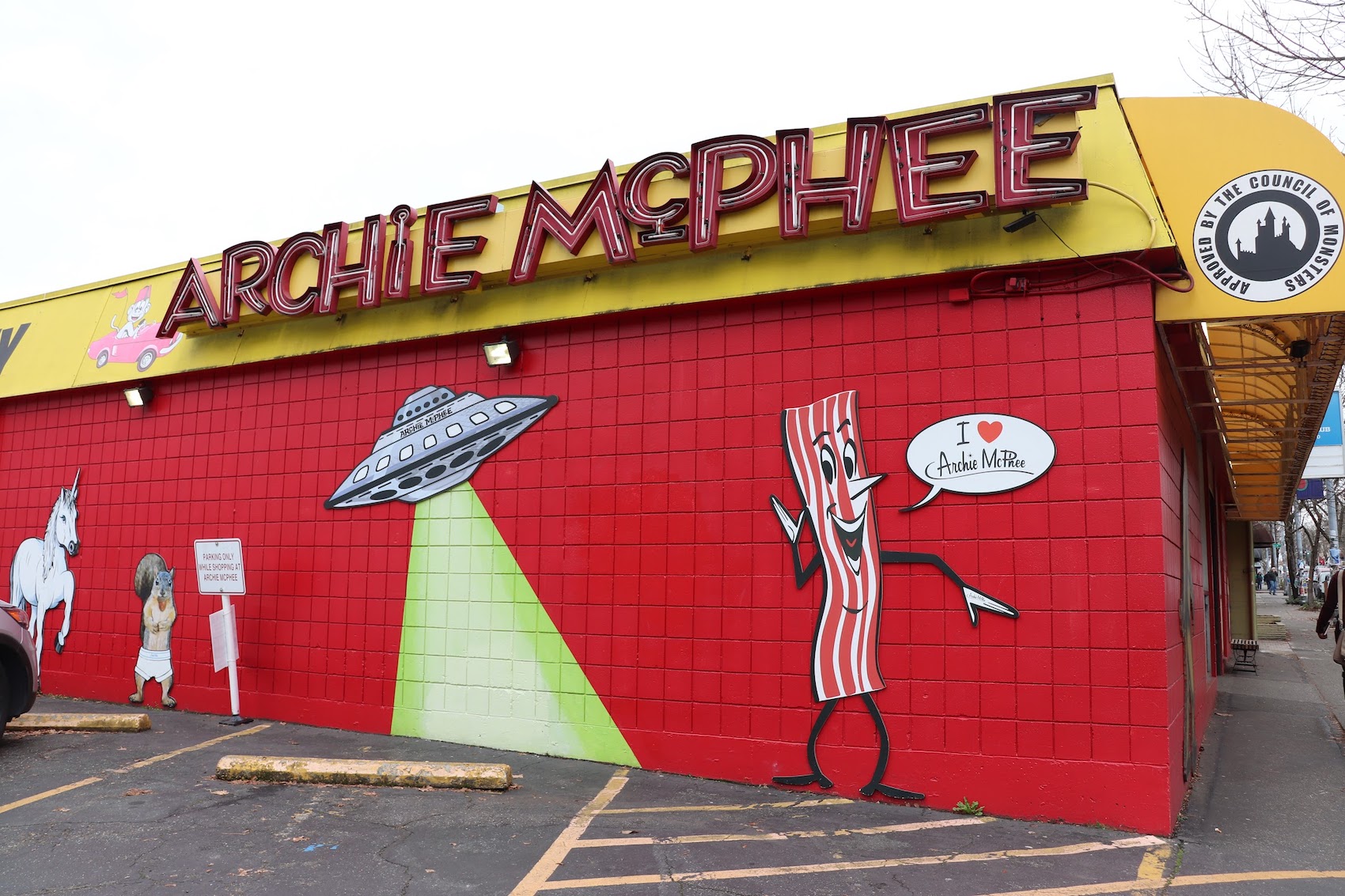 The Lowdown: You’ll probably leave Archie McPhee wondering what it actually is, but the short answer is that it’s most likely a joke/party store. Places like this don’t exist often outside of Seattle, so don’t miss checking out the rubber chicken museum. Literally, there is a rubber chicken museum inside. Spend some money on some unnecessary bandages that look like leeches and it’ll be the perfect souvenir from Seattle. 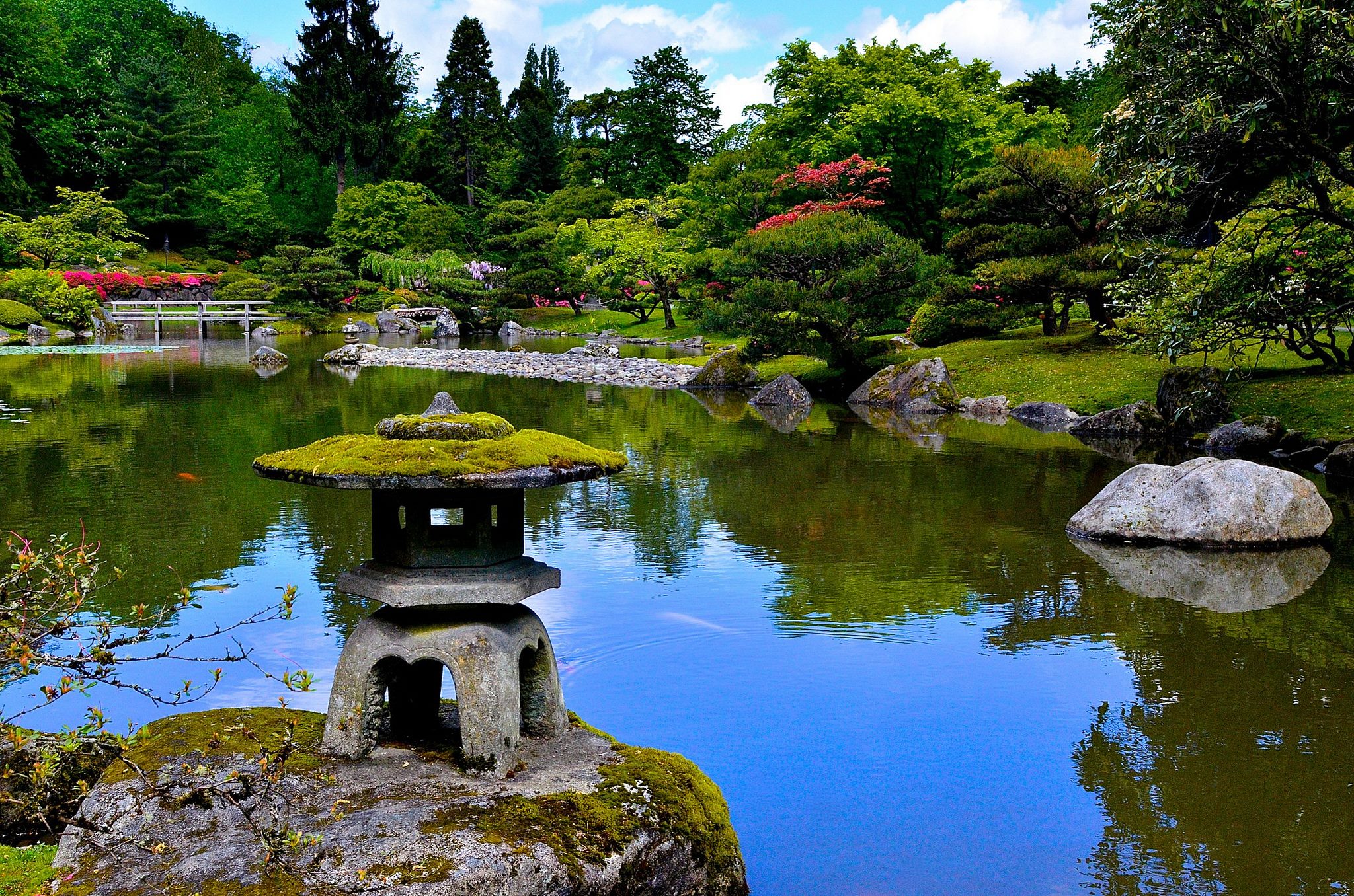 The Lowdown: Seattle’s cool climate and constant rainfall make the city ideal for growing the flora found in Japan. The Seattle Japanese Garden features 3.5 acres of cherry trees, Japanese maples and koi ponds and even hosts traditional tea ceremonies inside a tea house. The garden is especially beautiful in the fall and spring. 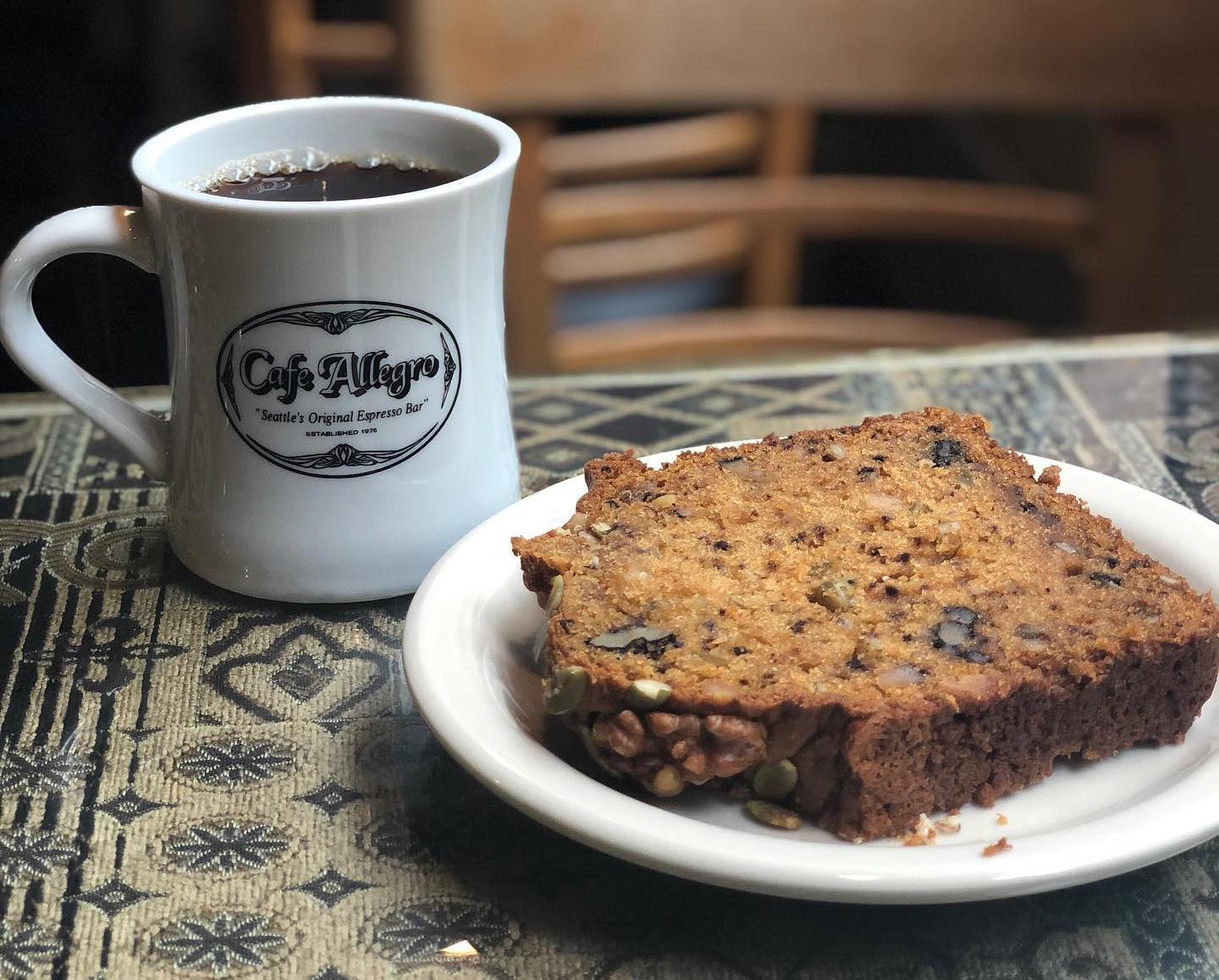 Where: Alleyway, 4214 University Way Northeast, Seattle
Cost: $10 and under

The Lowdown: Established near the University of Washington campus in 1975, Café Allegro might be the Seattle coffee house. True to its grunge with an alley location, posters plastered all over the walls, and a very cramped, graffitied bathroom, Café Allegro makes us nostalgic about simpler times when dark roast and cigarettes went together like peanut butter and jelly. 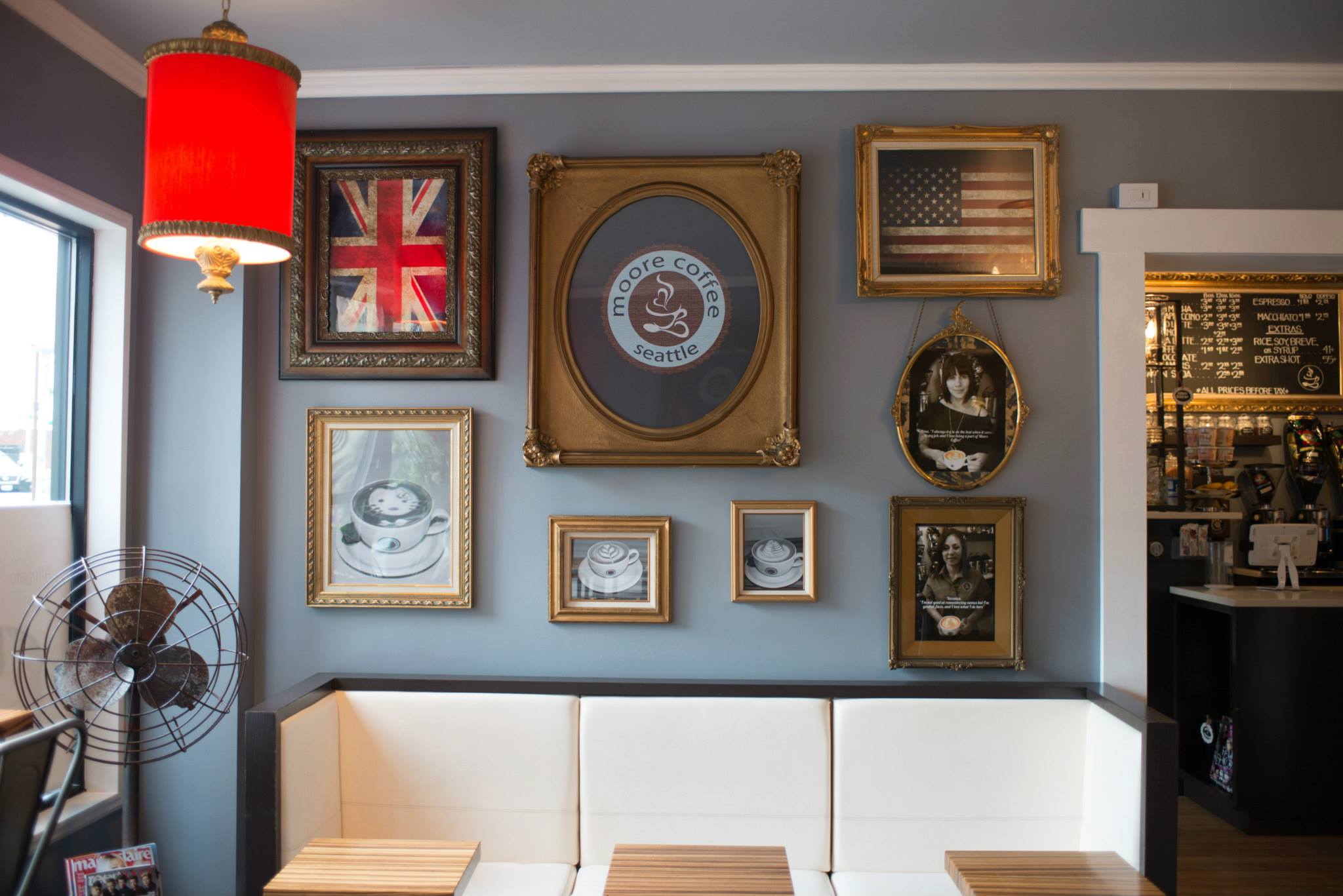 The Lowdown: If Café Allegro doesn’t sound quite like your cup of joe, Moore Coffee Shop is a little more mainstream. Famous for creating cheeky latte art, Moore makes rainy mornings in Seattle a little brighter. 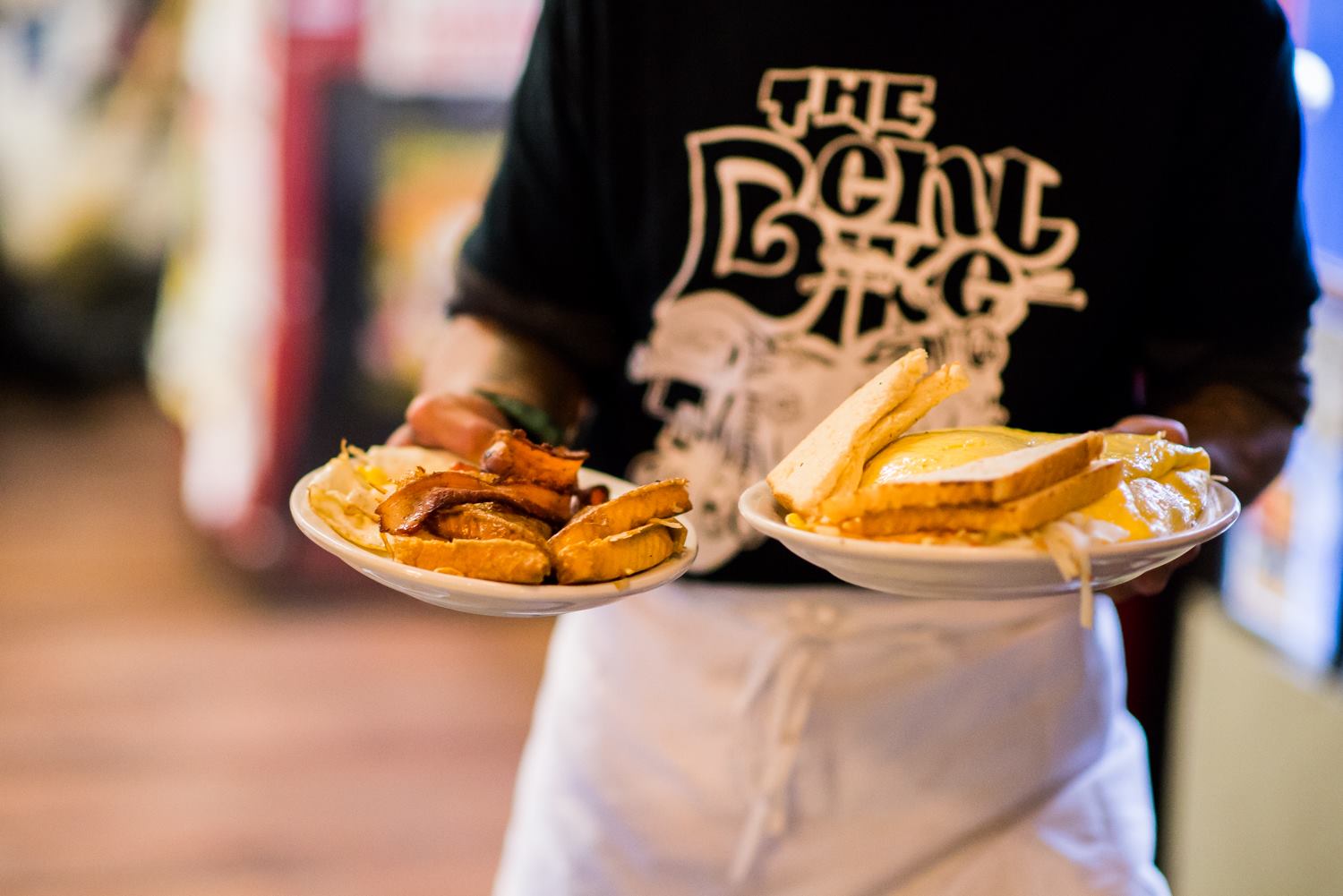 The Lowdown: To say Beth’s is unhealthy would be an understatement. With omelets called “Triple Bypass” on the menu made with a dozen eggs, you should probably know what you’re in for if you eat here. Since Beth’s is open 24/7, we recommend you start your day with hearty heaps of food (shared among friends to avoid some serious leftovers), but locals love to drop by this all-American diner to enjoy midnight grub. 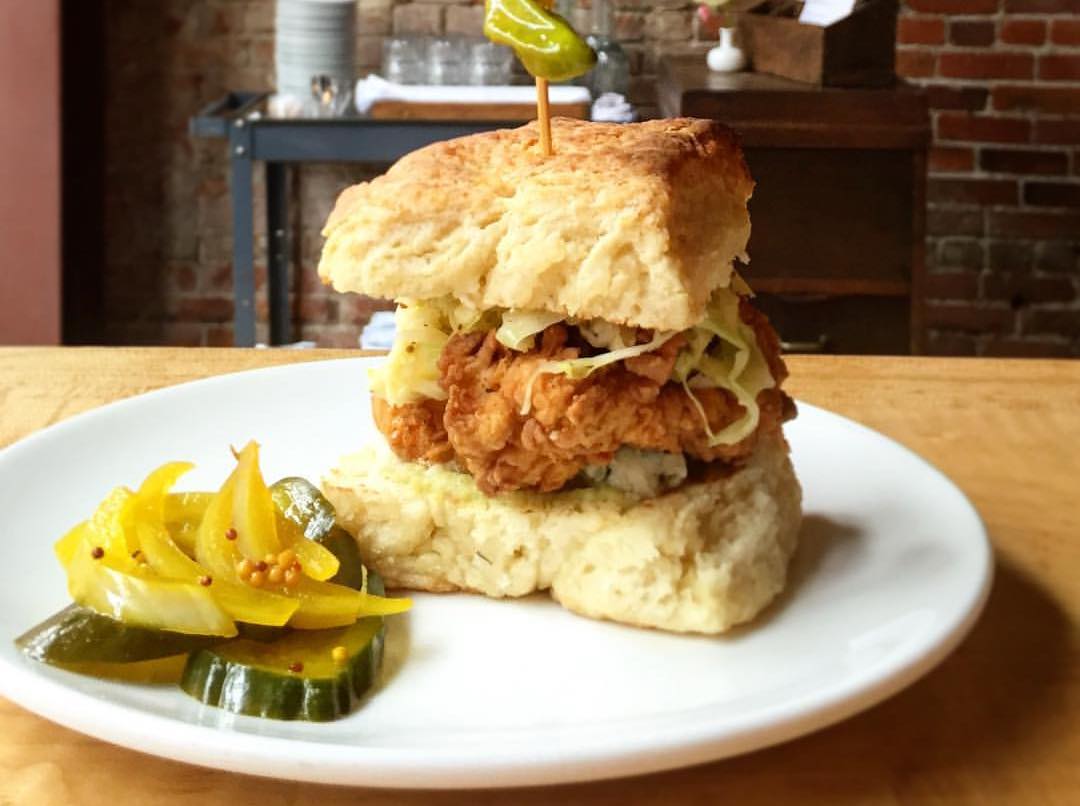 The Lowdown: This brick-and-mortar eatery in Pioneer Square is located inside a building that’s over 100 years old, but the menu is quite modern. New American fare suits Damn The Weather just fine. Try the chicken-fat fries, marinated olives and a fried shrimp poboy topped in tartar and cabbage. It’s a cozy meal for a cloudy day in Seattle. 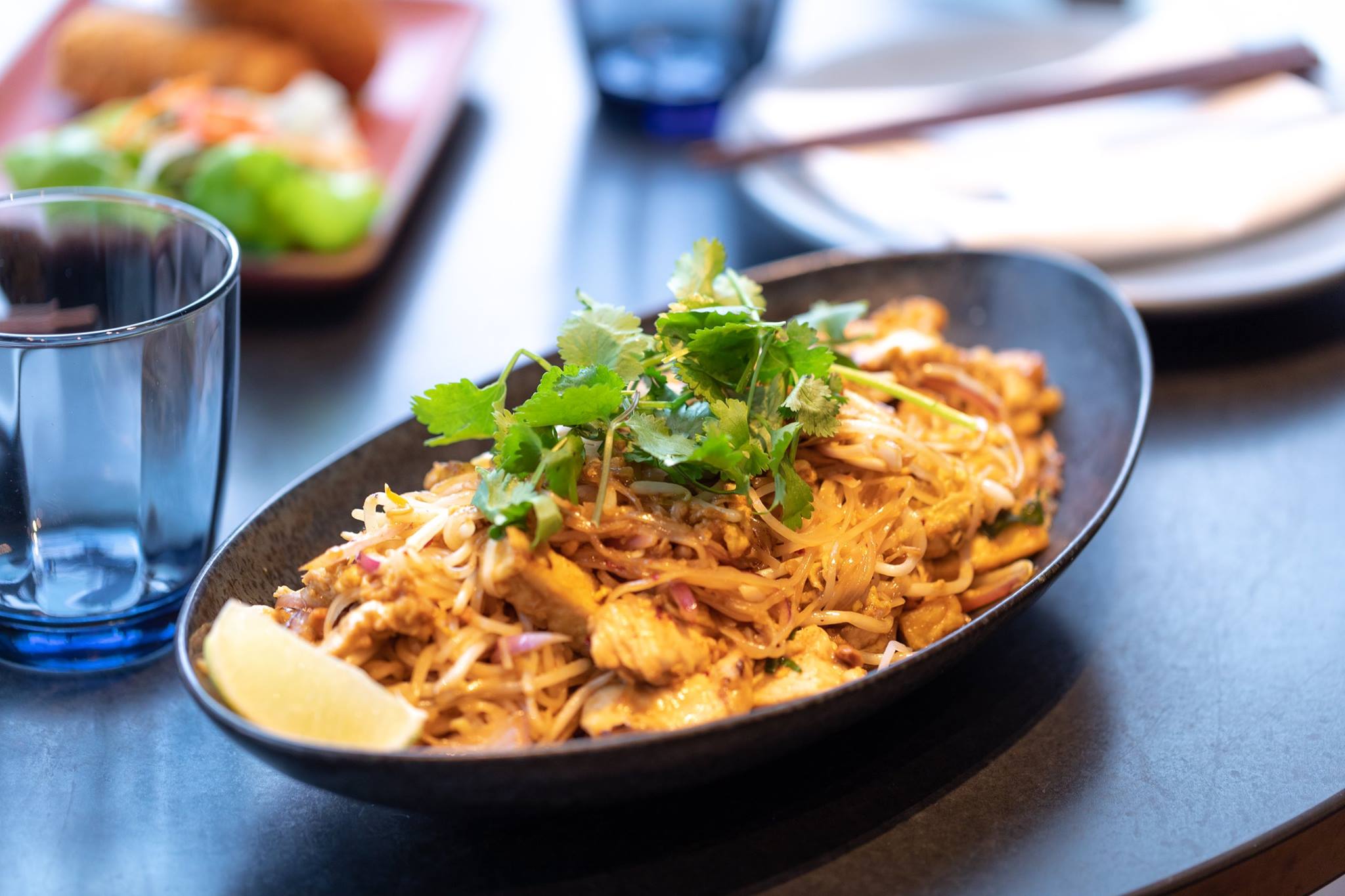 The Lowdown: Located on the bottom of a luxury apartment tower, Wild Ginger’s McKenzie location is close to the Staybridge and offers some of the authentic Asian offerings the Seattle food scene is known for. Family-style servings of Chinese, Indonesian, Malaysian and Vietnamese dishes span the menu. For lunch, try the wagyu beef and Thai chicken with peanut sauce skewers from the satay bar before salivating over the Mongolian noodles or the seven-flavor flank steak with basil, lemongrass, garlic, ginger and other Vietnamese toppings. Whatever you get will be good though. 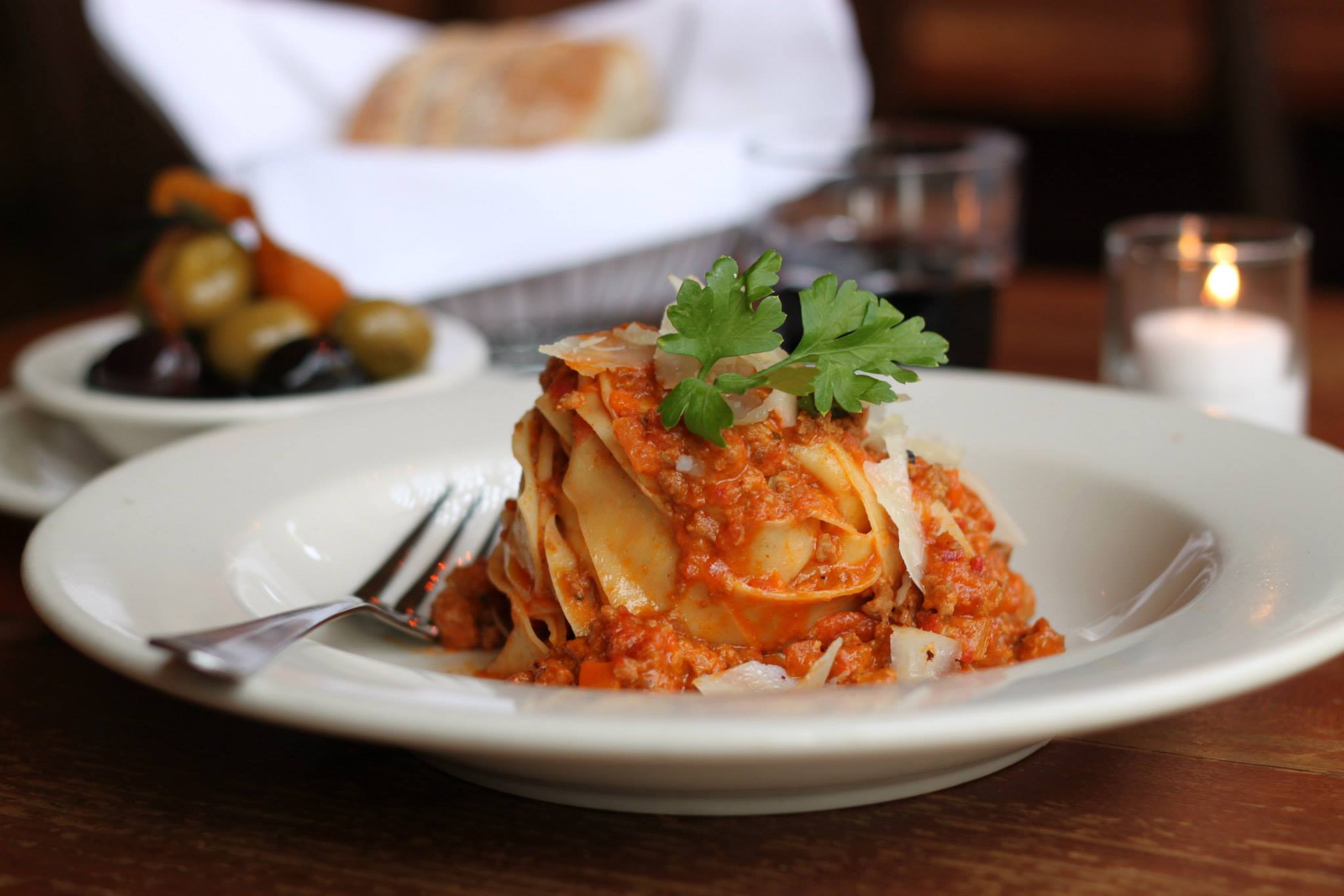 The Lowdown: You’ve probably seen the likes of every upscale Italian establishment raved about in your area, but those white tableclothed restaurants don’t hold a candle to The Pink Door. Even if you come here for the atmosphere alone and only order dessert and a cocktail, it’ll be a sexy spectacle. Hidden in Post Alley near Pike Place Market, The Pink Door is known for its layered spinach and pesto lasagna served in a boat bowl, gourmet Italian cheese and salumi plate and fat Mama’s meatballs. Apart from the elegant chandeliers, candles and pampered parlor-style seating, dining guests are also entertained by trapeze artists, jazz ensembles, Tarot card readers, cabaret acts and other exciting performances. 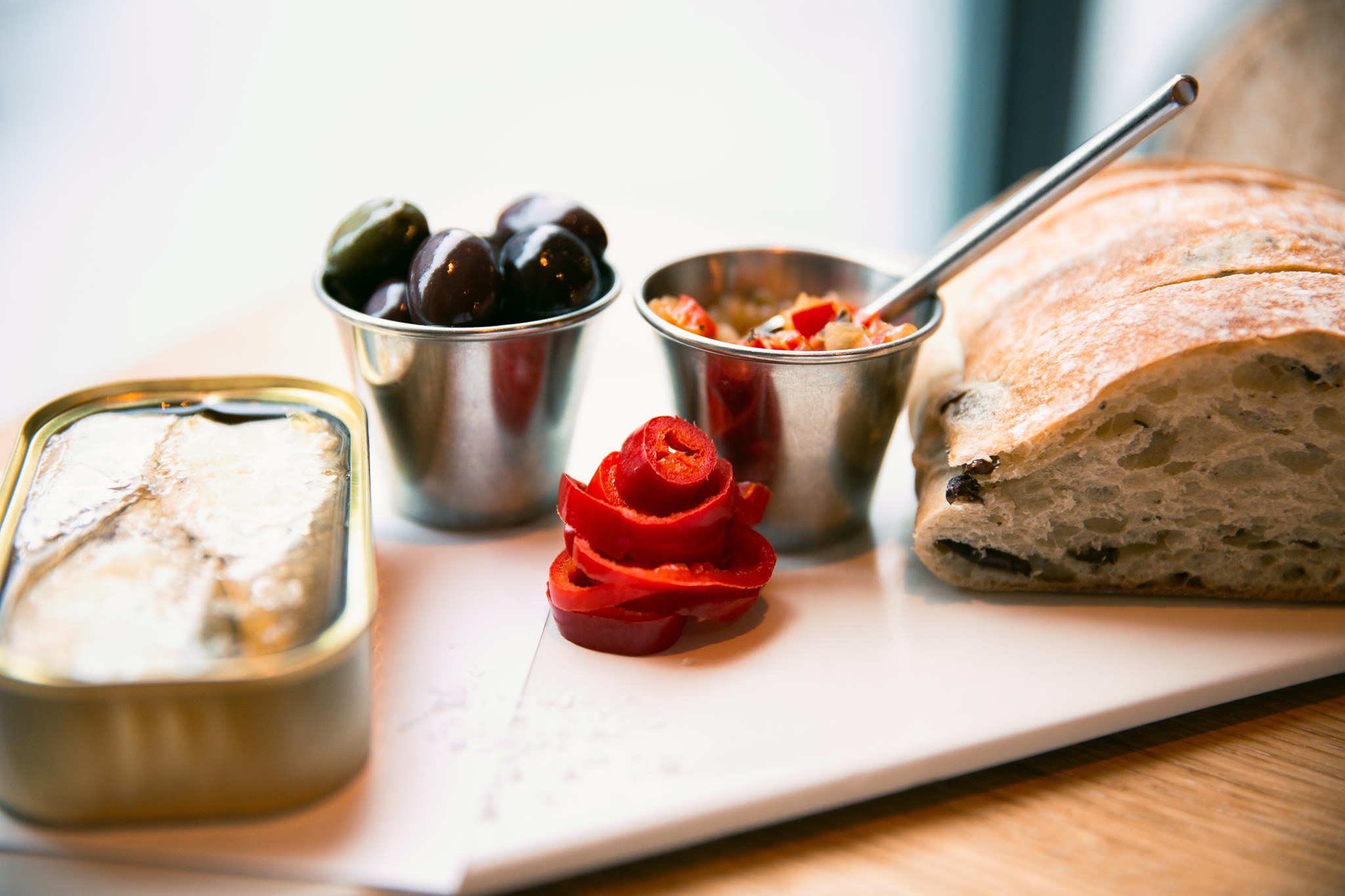 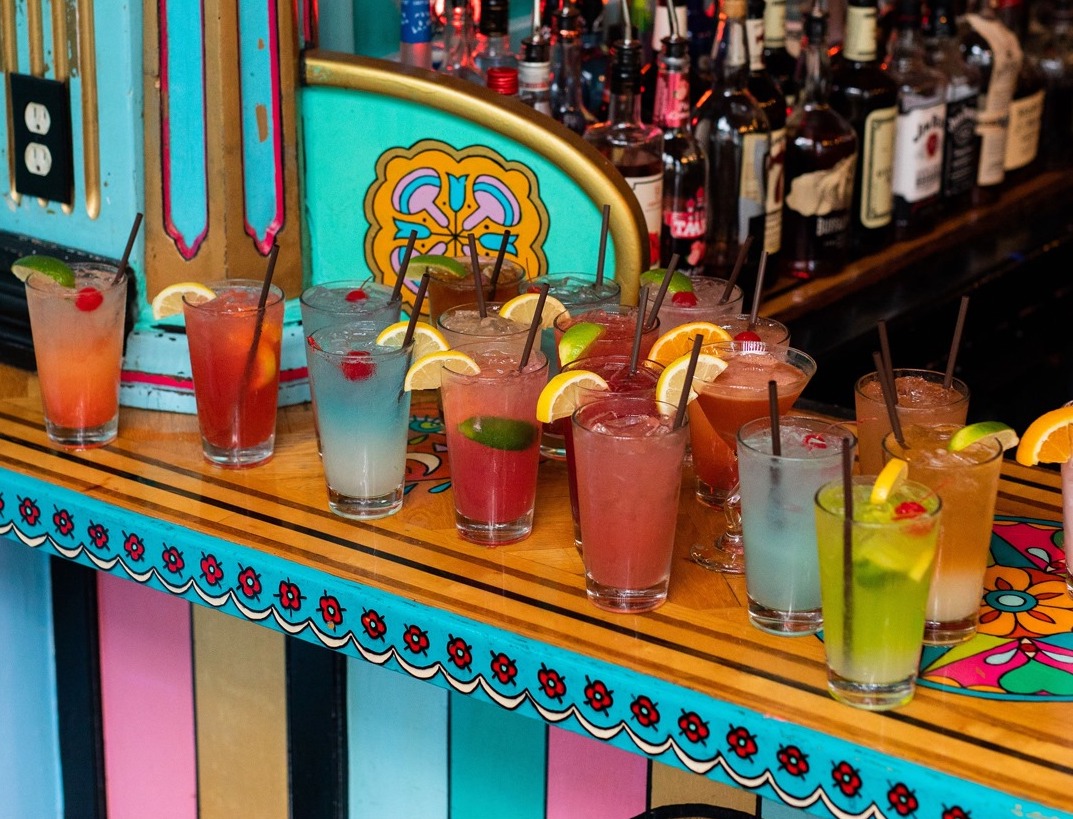 The Lowdown: Bar-crawling in Capitol Hill doesn’t have to be just dropping into dive bars. You could probably spend your entire night at Unicorn and play arcade games, get silly inside the photo booth and waste money for booze on the claw machine instead. Carnival food like corn dogs, funnel cakes and fried peanut butter cookie dough otherwise known as unicorn droppings are available after you indulge on fruity cocktails that come in every color of the rainbow. 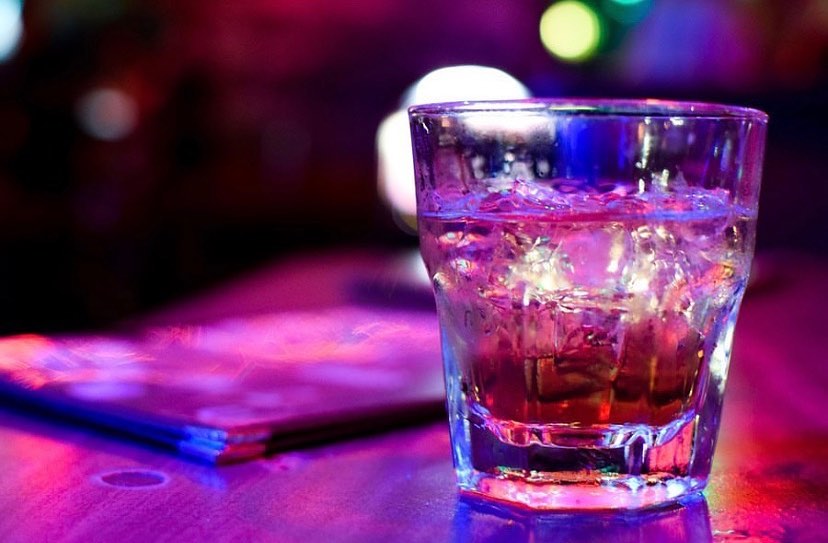 The Lowdown: Linda’s Tavern has been popular since it opened in 1994 and Kurt Cobain was a frequent customer here. It’s actually where he was last sighted before the tragedy hit. As far as dive bars go, Linda’s is an authentic Capitol Hill gem that still serves cheap bottled beer and your run-of-the-mill cocktail selection alongside burgers, nachos and fries. Just like Kurt, it’s where the cool kids hang. 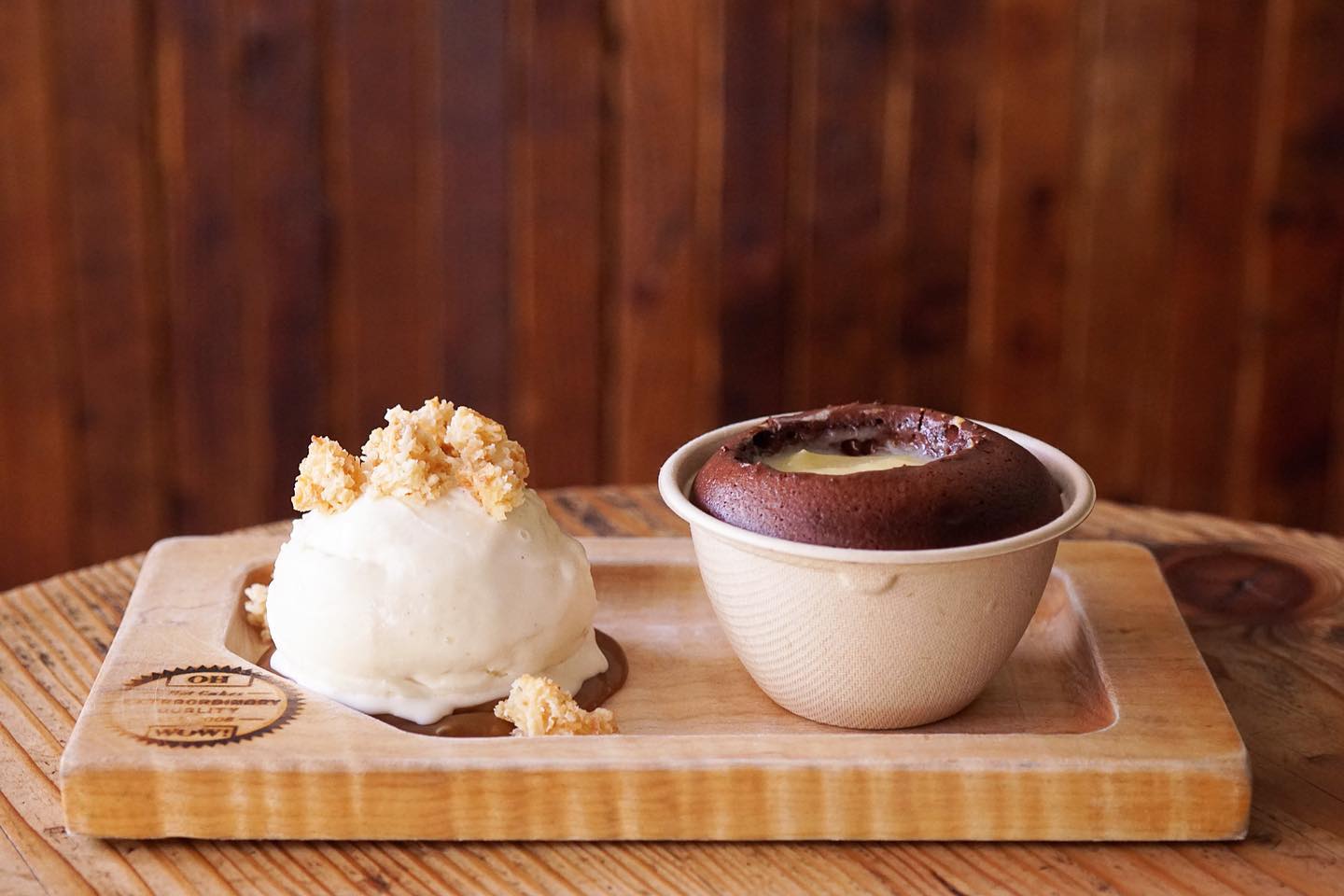 The Lowdown: It’s better than a brownie and it’s better than chocolate cake. A molten chocolate cake from Hot Cakes looks small, but it’s all you need. Choose the Dark Decadence with dry-burned caramel and nib toffee on top paired with vanilla ice-cream. This melting chocolate dessert is probably the best we’ve ever had and we really wish this cakery would move to the Mile High.