It is easy to forget that artists don’t always know exactly what they are trying to create. Sometimes, a stroke of genius comes in the form of an accident, a mistake or a moment of uncertainty. And in those times, it’s always a little magical because it feels like the art has transcended in some way.

In his sixth solo show at Robischon Gallery in downtown Denver, New Mexico artist Ted Larsen is displaying a series with that enchanting touch, appropriately called Stand Up, Buddha. Composed of 17 small sculptures made out of metal matchboxes and rough wooden stands, this exhibit shows an enlightened version of Larsen’s signature sculptural style. Instead of adhering to a strictly abstract and high-art aesthetic, this series incorporates metaphor, spirituality, childhood memories and a little bit of humor.

“When I placed the assembled box forms onto wooden plinths something else unexpected happened; they became figurative. This was not my intention when I set out to make this work,” Larsen explained in a written statement. “Stand Up, Buddha became the working title because the Buddha figure is normally created in a seated or reclining position.” 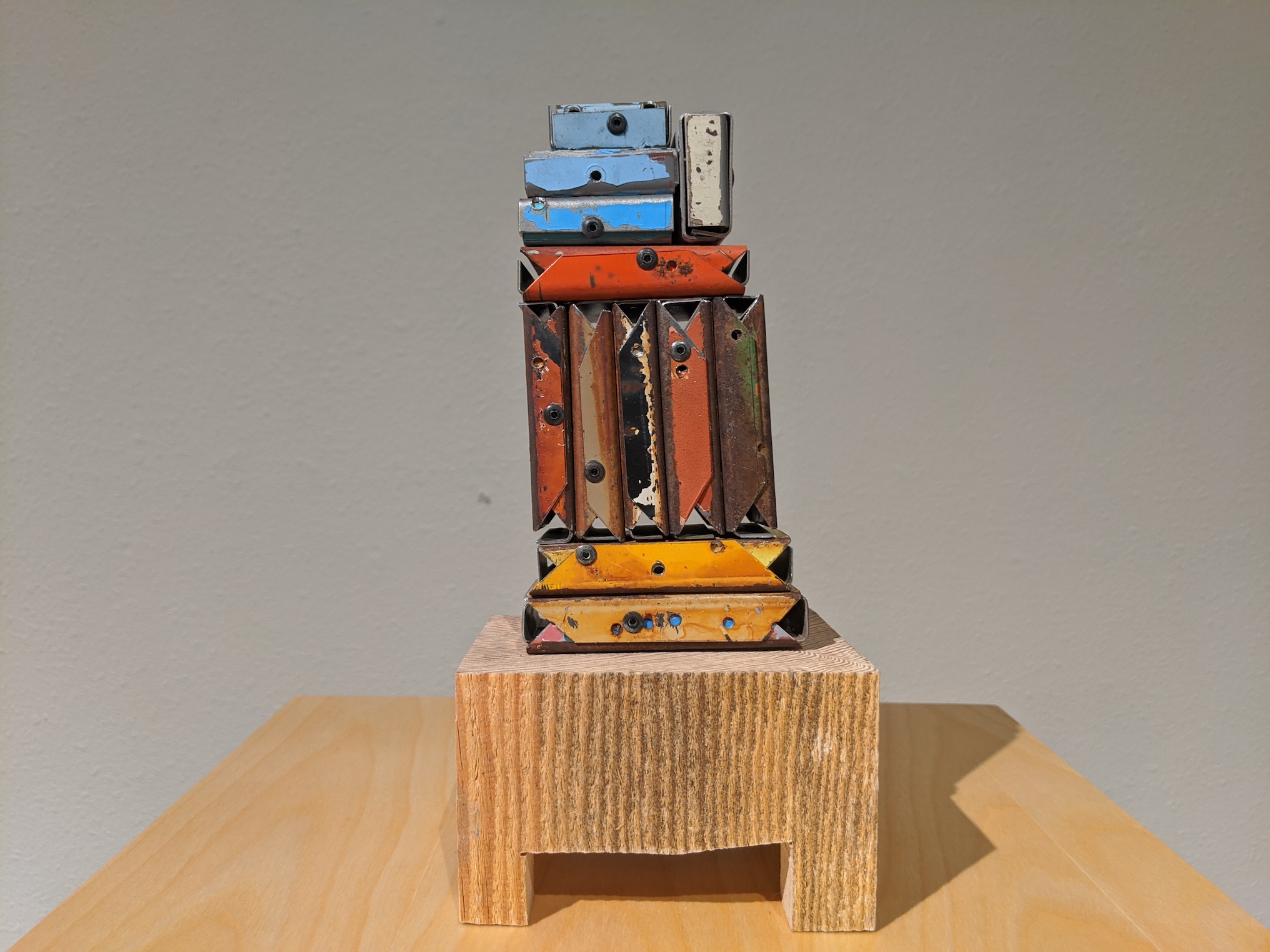 That aha moment stuck with Larsen and developed into this series on display at Robischon. Each “Buddha” is visually distinct from the others, but there’s a cohesiveness that makes the room feel like a shrine. Each sculpture is no more than 12 inches tall, standing on wooden podiums that display them nearly at eye level. And yet each one is monumental in essence, their presence radiating beyond their small statures and dominating the space.

These sculptures captivate attention like great rock monoliths or like ruins or like bones — they invite us in for a closer look and emit a rippling energy of time gone by. The metal Larsen used to construct them is salvaged steel he found in various objects and the rust spots and color fading are a result of natural processes. It’s easy to imagine an abandoned car or a dusty mechanic on the side of a desert road when you see these sculptures. 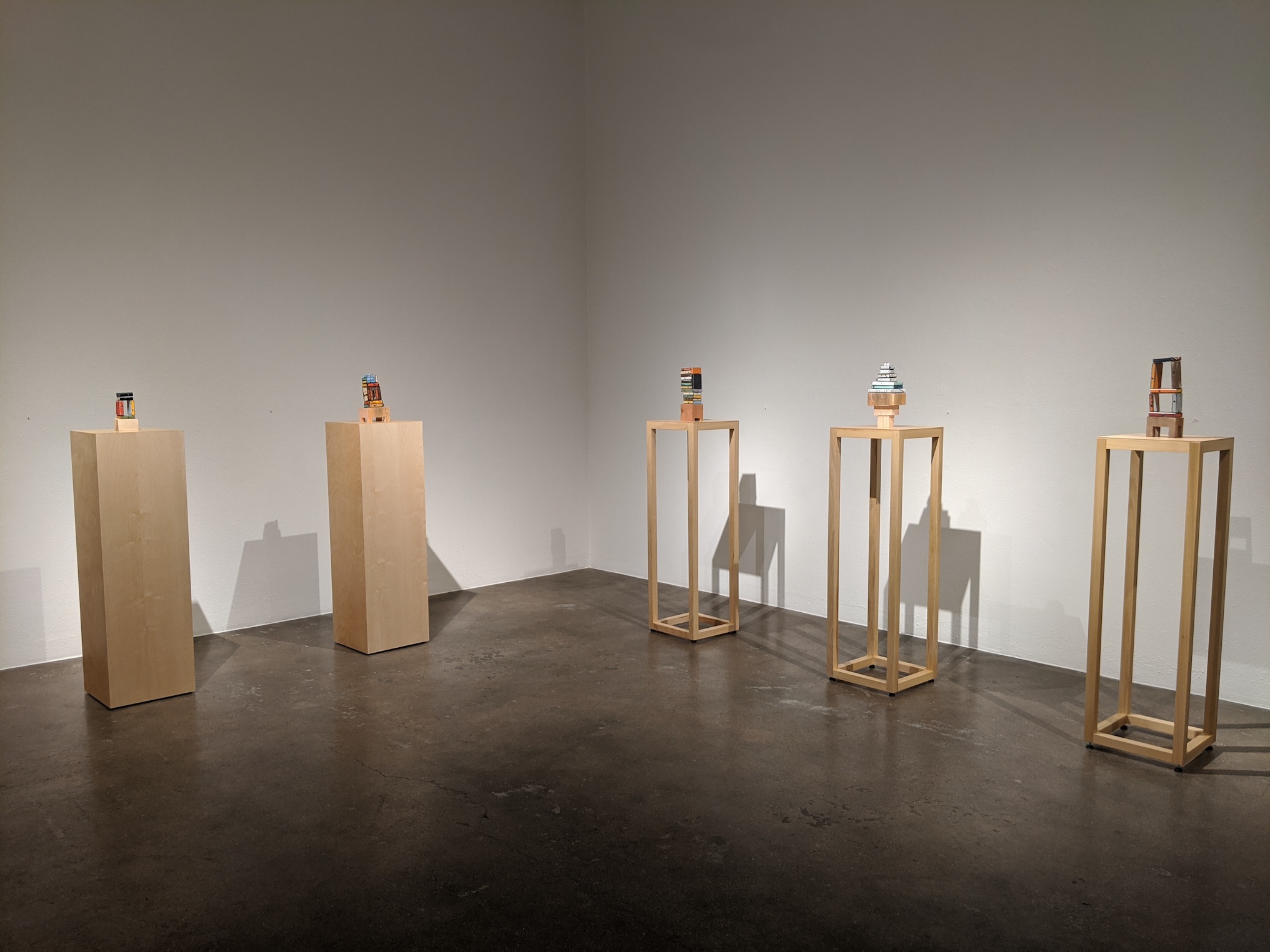 More than his previous work, the Stand Up, Buddha series betrays Larsen’s New Mexico home. It probably wasn’t intentional, as much as the idea of each one as a figurative Buddha wasn’t intentional, but it adds to the atmosphere in the gallery. The colors are the reds, oranges and sage greens of the canyonlands and the whites and blues of the vast skies. The materials — rusted metal and dried wood — are symbolic of the rough conditions. And there’s a mystery about the sculptures, just like the creatures of the desert, where you’re not sure how they exist and survive.

According to Larsen, the construction of these Buddhas started with a fascination with matchboxes. “Matchboxes hold a special interest for me — why, I cannot exactly explain. They are functional and yet somehow mysterious for me,” he explained. “I used to keep little things in matchboxes when I was a kid… I always open [one] up half expecting, in child-like wonder, to find something exciting.”

So he started making matchboxes out of salvaged steel, folding and bending the aging metal into new shapes. Then he stacked them on top of one another. He called them Buddhas, a working title at first, but one that stuck. He thought, “if these little forms somehow have the qualities of metaphor or accidental aesthetics in the figurative, it seemed right that I should ask them to stand up and face their challenge.” He liked the idea that stacking the matchboxes was similar to people coming together to overcome an obstacle. 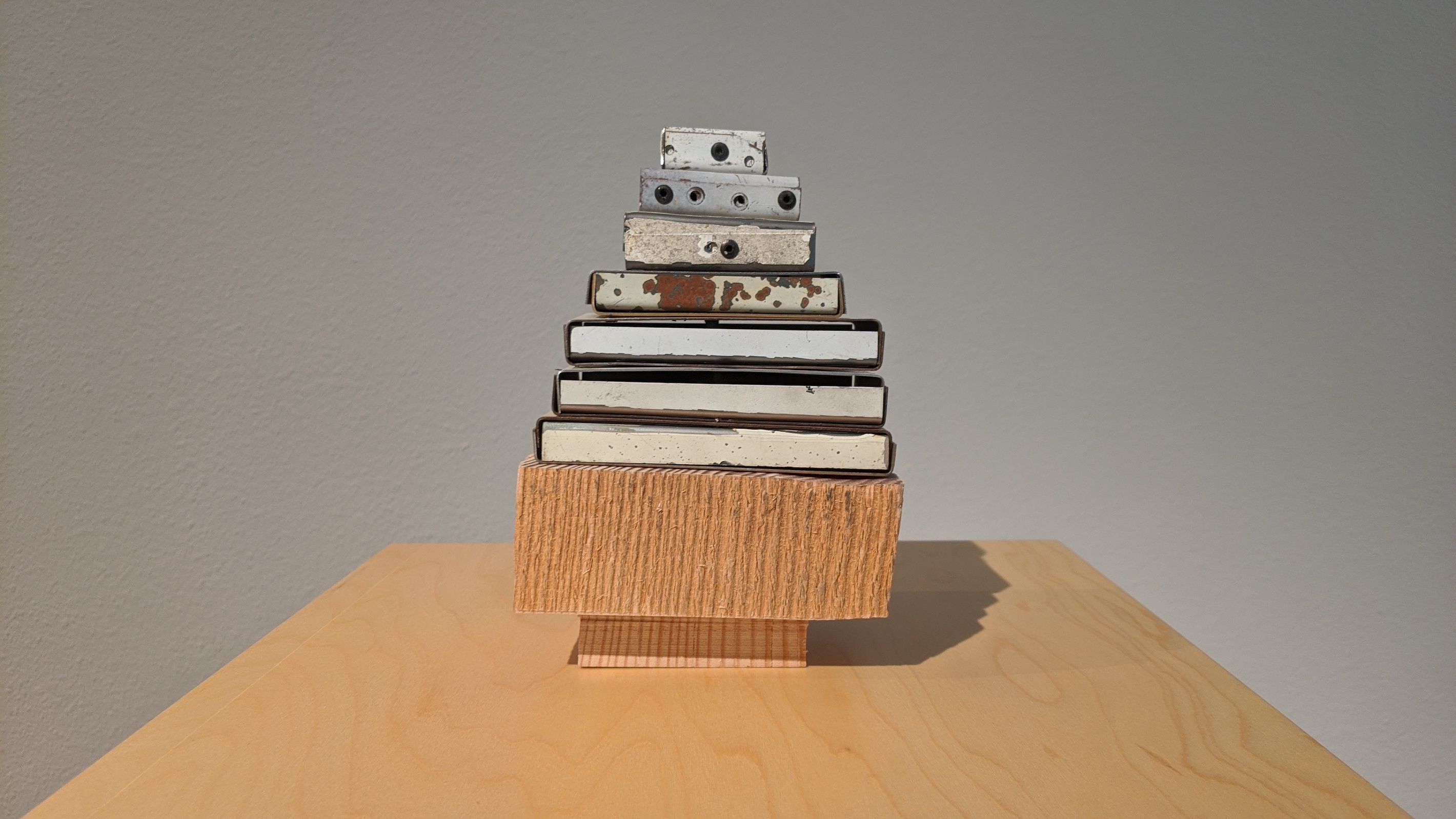 Two of the Buddhas are composed of exactly seven matchboxes — a number that represents the stages of awakening in Buddhism. Whether that was intentional or not is unknown, but Larsen was certainly channeling something extraordinary in the creation of these sculptures.

Ted Larsen’s Stand Up, Buddha is on view at Robischon Gallery, 1740 Wazee St., until March 21, 2020. For more information, visit this website.

All photography by Drew Roy