Jesse Scott and the Black History of a Denver Barbershop

The centerpiece of many Black neighborhoods is the barbershop.  A confluence of buzzing razors and casual conversation, the barbershop is more than a place to sharpen a lineup or freshen up a bald fade, it’s a safe space for communities who often lack one, and Jesse’s Park Hill Barbers is no exception. Owner and lead barber, Jesse Scott has been in the game for more than 40 years, his cluttered shop a testament to his dedication. Walls lined with prominent Black figures and crevices stuffed with plaques and certificates honoring his work in the community tells a story that has little to do with cutting hair, as much as it does connect to Black lives in a meaningful way. To an outsider, Scott’s humble shop is just a neighborhood hole in the wall, but to the Park Hill community, it’s a crown jewel — a place overflowing with the riches of Black culture, past and present, and the wisdom at the helm, charging boldly into the future. 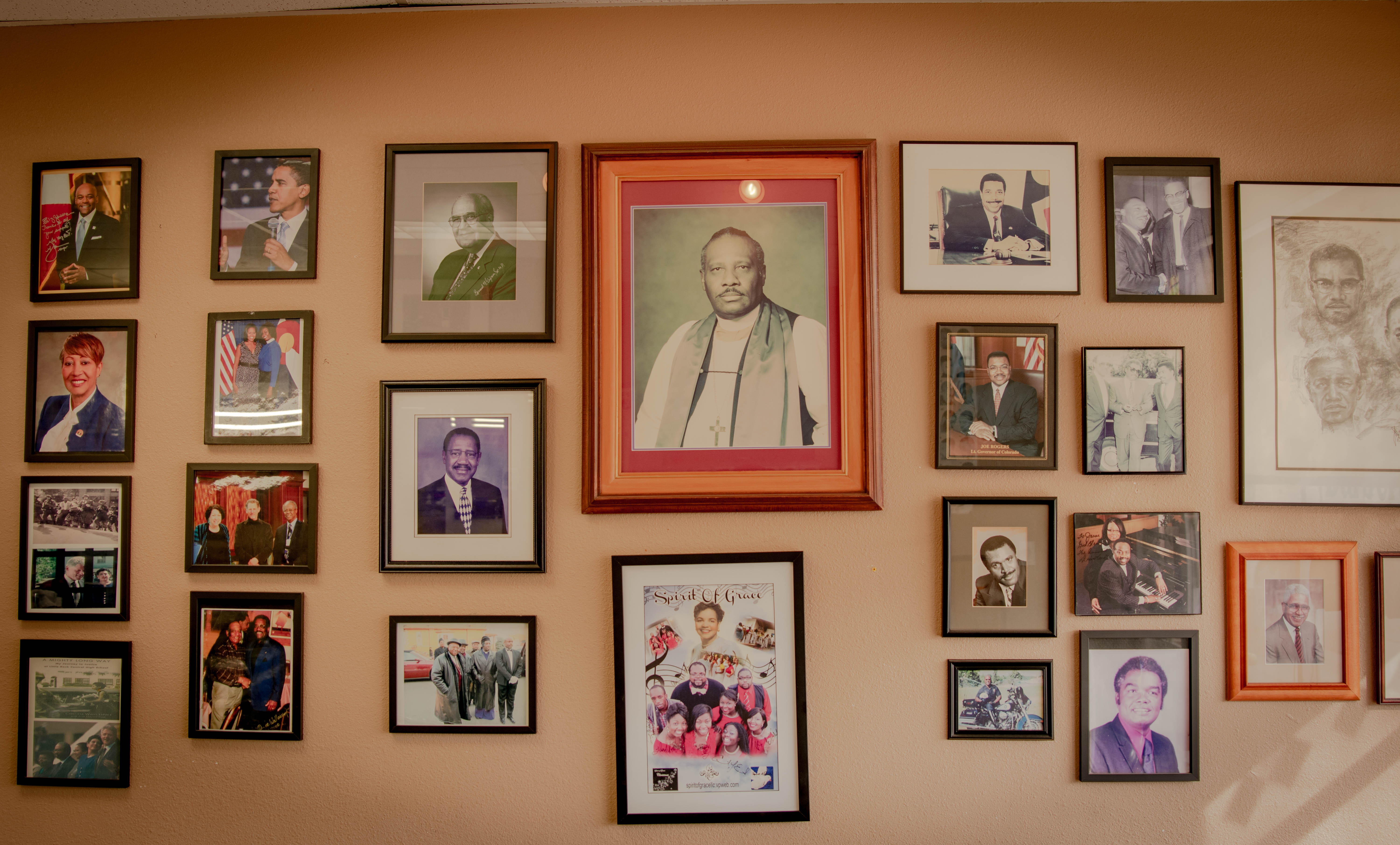 Scott landed in the barbering profession by accident. Arriving in Colorado from Indiana chasing basketball dreams and a college degree, Scott eventually reached a plateau with neither avenue panning out in the way he intended. A 26-year-old caught between the rock of being young and wild and a hard place of having no degree nor applicable skill set, he had little in the way of options. Equally a man of faith, Scott prayed about it, as he does with most decisions in his life, and found himself called to a local club’s seeder program where they paid Scott to go to school to be a barber. What initially began as a means to an end quickly took root as a career for Scott, in part to his mentor, a Mr. Whitney Armenlin who took him under his wing.

“The barbering thing opened up many doors that I had not even thought about,” said Scott looking back on taking that initial job.

In the reckless height of his youth — wherein going out drinking and hanging in the park took precedence over the responsibilities — Armenlin tried to thrust responsibility upon him, which put a fair amount of contention over their relationship. But Armenlin never gave up on him. Armenlin continued to look out for Scott until the day he died, and by that time, Scott was a star barber in his own right, cutting hair for players on the Nuggets and the Broncos.

Without his mentor looking out for him, Scott was once again left to fend for himself. Jealousy and opportunism from his fellow barbers toward his burgeoning profile got him ousted from the shop that raised him, but Scott, with a life rededicated to Christ and a resounding work ethic to back, was unfazed. Scott proceeded to bounce around Five Points, Cap Hill and the Park Hill neighborhoods settling in other shop chairs until he finally came to his own permanent outpost in the latter. An old storage facility owned by Jim’s Liquors on the corner of Bruce Randolph and St. Paul Street was the spot. The place needed to be fixed up, so Scott spent his last dime getting it into shape. Whatever money he lacked, the surrounding community and Black dignitaries like former Mayor Wellington Webb and Dr. Johnny Johnson among others helped lift the rest of the load — it took a village. In the 15 years since, Jesse’s Park Hill Barbers has been running strong, with the community to thank. 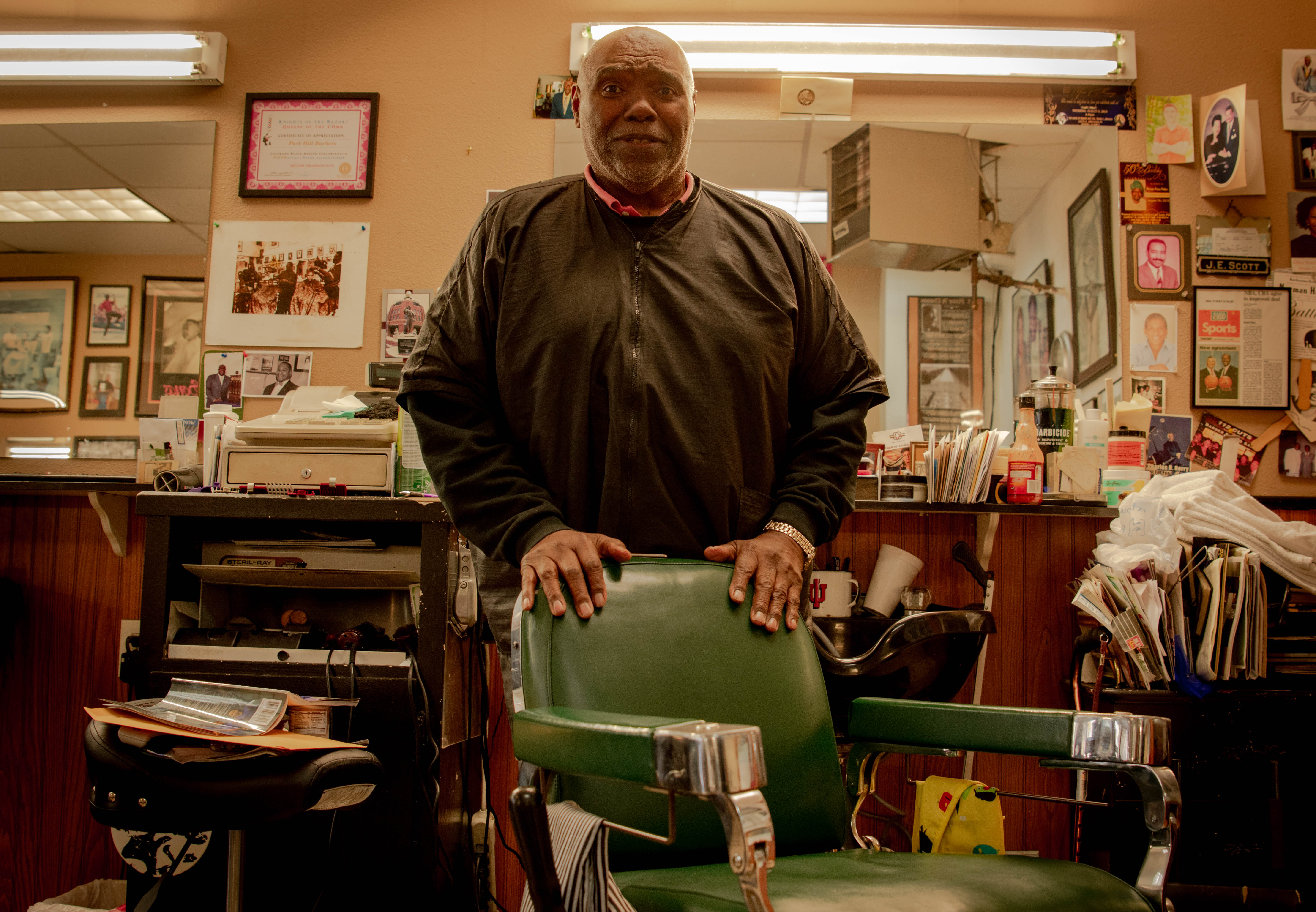 Jesse Scott at his typical station

Now in his late 60s, Scott has built his barbershop into a “Black men’s country club” — a mecca of conversation and inspiration for the Black community, but primarily young Black men. It’s an ode, if you will, to those who helped him along the way when he was struggling. Many of the portraits that plaster the walls are of past local clients of varying degrees of influence, and other Black men — doctors, lawyers, athletes and even the former President — all of whom he hopes these young Black men learn to look up to.

“That’s the kind of shop you want to have. A shop where the kids can come in and not have to deal with the foolishness. They can look up at the walls and see prosperous Black men — they can be anybody they want to be and do anything they want to do.”

Once averse to showing up in his youth, Scott still rises to the occasion almost every day to cut his clients hair, despite having to nearly drag one of his legs as he saves up for a much-needed hip replacement. With every coming day, Scott prays over his humble shop, to protect his abode as well as the patrons who walk through his door — his favorite part of the job.

“You’ve got to be a people person to even want to do this. If you don’t like the people this isn’t going to work. Some of these young people that I’ve had in the shop before thinking it’s a hustle now, gotta get you in, gotta get you out, but it’s not always about the money. Some folks don’t have it, but it’s still ‘c’mon we’ll get you cut.'” 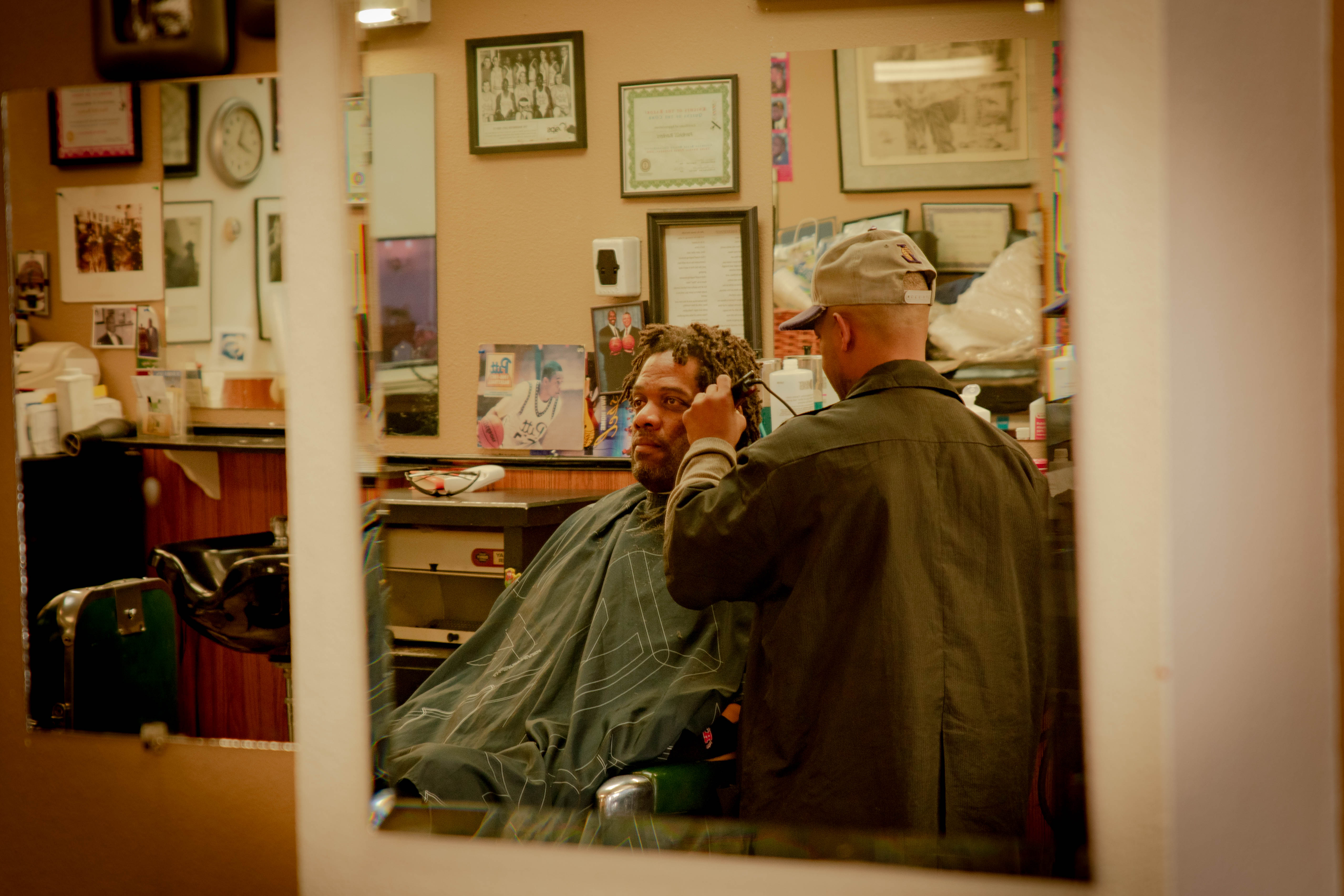 Scott’s perspective of putting people first and creating a welcoming culture in his shop has done well for him, as generations of Black men and their children have walked through his door, all to be cut by the same man. However, for as much as the people are his favorite part of the job, watching them pass away, as he has over the years is, to him, the worst. One patron, in particular, Mr. Porter, had come into Scott’s shop nearly every day over the past 15 years or so, and passed away sometime last year. Scott keeps a picture of him, and many of his other late clients all across the shop, as they are just as important to the shop as the shop itself.

With his renowned dedication to the craft as well as his clientele, Scott’s reputation proceeds him, in recent times even garnering praise from the likes of the current Mayor Michael Hancock for his service to the community. Despite his many accomplishments and the prospect of growing older looming, Scott has no plans to retire anytime soon — he’d much rather spend his days doing what makes him happy with those who make him happy — his customers. Although he places emphasis on uplifting the Black experience, he doesn’t discriminate. Scott strives to make his barbershop a place for all.

“If you’ve got hair, we cut it. This is a safe place, you can come in here — anybody can come. We’re all one in here. We’re all brothers and we all love each other and that’s the key right there. And, when you walk out those doors I hope you gain something inside here that brightens your day and makes you feel alright.”