Trying to get your music discovered is hard enough as a local musician, only made harder in the pursuit of quality and image. The price of exposure is expensive — music videos, photoshoots, merch, album art, the list goes on — an endlessly burning fire in every band’s finances. However, two Denver transplants are seeking to change that reality with what they’ve dubbed, Downbeat Denver. Downbeat Denver is a spotlight session covering emerging musicians of a variety of genres across the scene. The men behind it, Mitch Wenig and Matt Carnes, both coming from audio engineering backgrounds offer their services, the taped performances as well as studio-quality audio for free, in the name of exposing Denver to the talent lying right under our noses.

Downbeat Denver’s choices are genreless with the only parameter being original music, so you get people as large as Brass and Gold Society alongside people like Kaitlyn Williams. We meet up with Wenig and Carnes to talk about how Downbeat Denver came to be as well as insight into a taping with none other than Denver-favorite, Kaitlyn Williams, shooting her inaugural episode.

303 Magazine: What led to you guys to Denver originally?

Matt Carnes: I’d come down here for work a couple of times and I just really fell in love with everything that Colorado had to offer — trying to get out of the South.

Mitch Wenig: I don’t know. Life just came to a point for me where I was wanting to do something else. I’m born and raised in the Bay Area of California and I have some family out here and a couple of friends who went to the University of Colorado. Just coming out here throughout my life, I really felt a connection with Colorado and came to check out Denver.

303: How did Downbeat Denver come to be?

MC: We work at a production company and we were just talking about how many amazing bands there are here. I own some equipment and he owned some equipment, an unfinished basement — we thought let’s put it together, now’s the time. 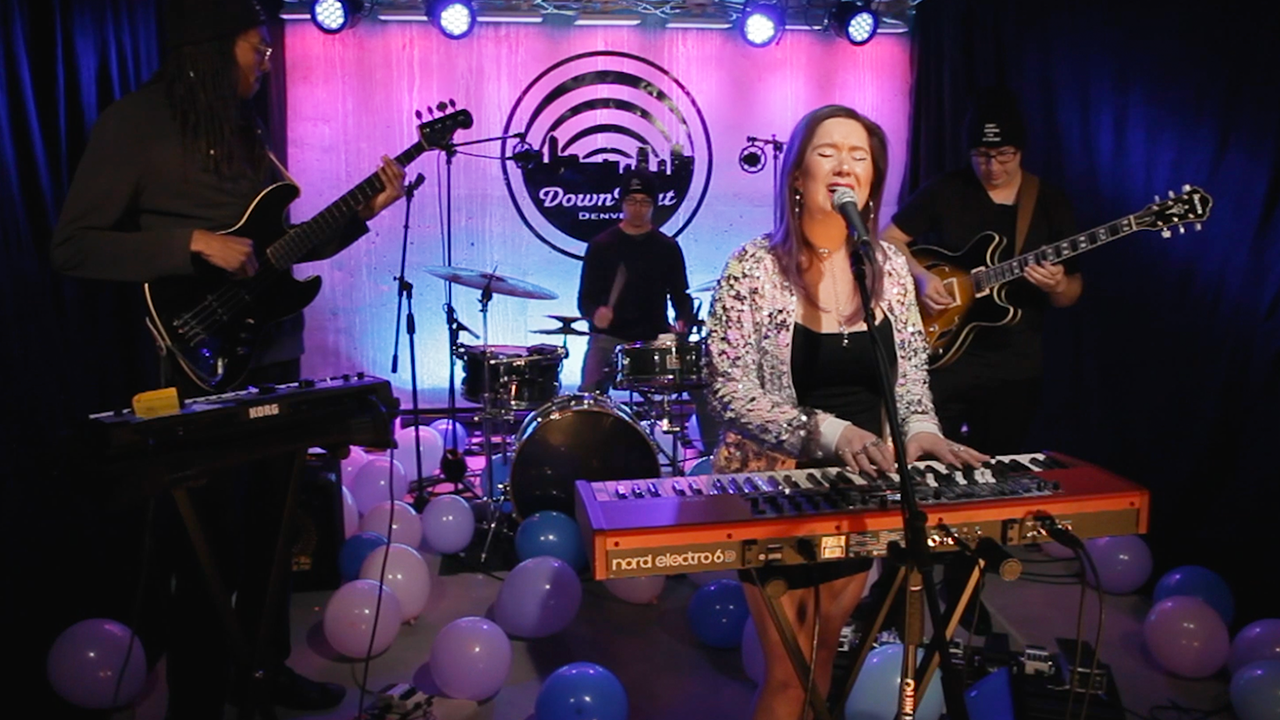 Still from the Kaitlyn Williams episode on Downbeat Denver

303: How do you go about finding the bands that you’ve worked with?

MW: Social media is definitely a big help. We’re on Instagram a lot and we go out to a lot of live shows.

MC: It’s such a great community that other bands will refer us to other artists that they think are great. It’s really nice being plugged into that. We’re kind of moving through all of these different musical circles and exploring all these amazingly talented musicians and singers. Kaitlyn is a great example of that.

MW: We’ve kind of hit a point now where people have seen the show and they’re getting in touch with us, which is really nice —  to be able to have people that are interested in coming on and wanting to play.

303: What made you want to offer your services for free?

MC: It’s how you get people to come in. We want to showcase you for free and really let people see you in raw form performing on stage with studio sound, and it just clicked.

303: What are the biggest challenges to actually producing these shows?

MC: Scheduling has always been the biggest challenge — to get everybody in — because we’ve received hundreds of band requests to come in.

MW: Just working with a 15 by 24-foot space — a Hitsville USA size studio. We’re both audio engineers, so it’s been a fun challenge for us trying to figure out how we fit in a full horn section, drum kit and all these different setups that have come in.

303: Both of you are audio engineers, but what background-wise came prior to Downbeat Denver?

MC: I went to school in Nashville, TN on Music Row. I worked up and down Music Row and I did a lot of country gospel, some rock, but it was basically working 16th and 17th street.

MW: My dad’s a contractor. He noticed that I was getting really into music so he helped me build a studio in my backyard. With just a single vocal booth, a couch and then my little area, I started working with a lot of local rappers and R&B singers and things like that. I then went to school and studied at SAE Expression, in Berkeley and then interned and worked at studios in Oakland and San Francisco doing a lot of live sound.

303: How does Downbeat differ from other studio sessions in town?

MC: I think one of the things that set us apart is we actually have an interview with the band and let them speak directly to their listeners and tell what kind of emotions they had when they wrote a song or what something is about and kind of have fun with them. And then, nobody else has the “questions snare.”

MW: The “question snare” is a little segment that we do. We get tons of random funny questions from our audience and everybody pulls one during the interview segment. It can be anything like, “if you had a thousand acres of land, what would you do with it?” Just random stuff. I think another thing that sets us apart too when doing these sessions is that we felt it was really important to make this a community-based thing.

303: What do you hope Downbeat becomes as it continues to grow alongside Denver’s music scene?

MW: I think one of the things that we talk about is eventually having it to where it ca not just in a basement, but where people can come to see this as a live experience. To have a live studio audience and make it a big thing where you have three or four acts coming on and people get to sit and experience it and be up close and personal with the music. Then, we also film it and share it with people as well. It’s kind of limitless where it could go.

303: What can you say about the Kaitlyn Williams episode?

MW: I first met Kaitlyn at Orpheus Fest Music and Arts Festival. Our friend started that whole thing with a couple of friends from the University of Denver. She was gracious enough to let Downbeat come down set up a whole interview session at Orpheus Fest. She had this really cool hexagon tower that was like three tiers and she gave us the second floor. As the artists got off stage, they would come up and do an interview with us while they were still kind of buzzing. Kaitlyn was one of the artists that came up and interviewed with us. We’ve been wanting to get her on for a while and we tried a couple of times and the scheduling wasn’t quite working out, and then, it finally did.

303: What is it about “Do I?” that you wanted to perform the unreleased song for the session?

Kaitlyn Williams: I think the reason we decided to perform it for the session is that we’re all super obsessed with it and thought “Man, people need to hear this, and we’re not willing to wait a year for this track to hear the light of day.” Sometimes it really takes that long for a song to get done and out into the world.
303: How did you prepare for it?
KW: We rehearsed quite a bit for this performance. We’ve recently gone from a five-piece back down to a four-piece band, where I’m playing keys again, so I have a lot more responsibility as a keys player — all puns intended — in the group. I also bought 60 balloons for the shoot. You’d think that’s a lot, but it didn’t quite fill the room.
303: What was your experience like recording the session with the DownBeat guys?
KW: We had a blast playing. It’s wild to put your music under a telescope when recording live. So many different mental factors go into play  — are we all grooving? Do we look good? Are we having fun? Am I singing in tune? So many things to think about, but I think we took what could be a pressure-filled situation and made it fun.