In an event created to celebrate live music and collaboration at its finest, Mission Ballroom will host the inaugural Denver Comes Alive on Friday, January 31. The one-day festival will feature industry heavy-weights including members of Dead & Company, Jerry Garcia Band, Snarky Puppy, the Disco Biscuits, Ghost-Note, Break Science, Dumpstaphunk and The Motet to name only a few. Denver Comes Alive is our city’s spin on Brooklyn Comes Alive, a standing success inspired by the musicianship of the New Orleans jazz community and all of the elements — live music, food and art coming together to create culture. Kunj Shah, founder of Live for Live Music and one of the masterminds behind Denver Comes Alive, describes the show’s lineup as “all killer and no filler.” Musicians featured in Denver Comes Alive have been hand-picked not only for their commercial success in their genre, but for their individual artistry.

“This event is almost like a fantasy sports league where we pair up these musicians in dream scenarios that haven’t ever really been experienced before,” Shah says. 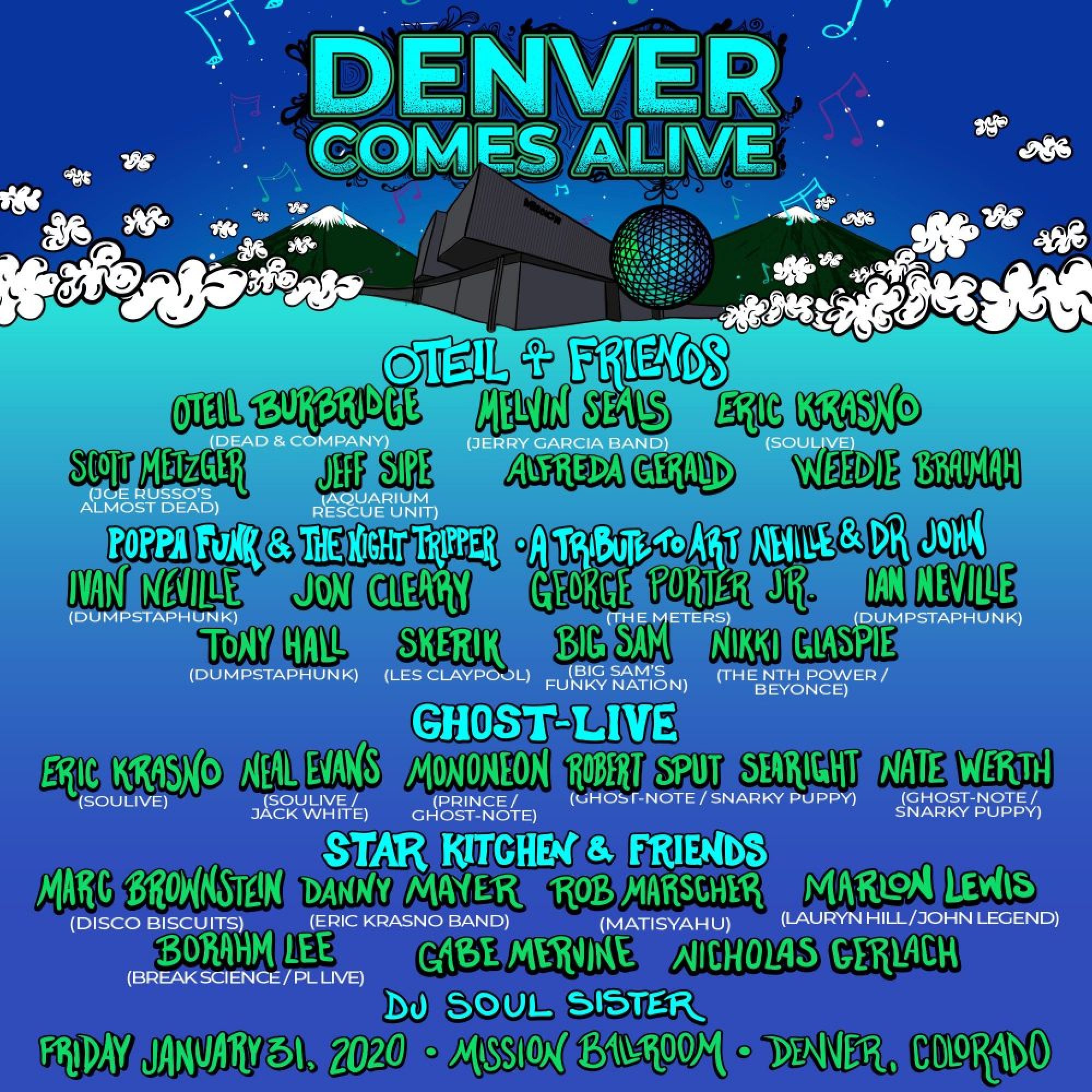 The night will consist of collaborations from Oteil & Friends, Poppa Funk & The Night Tripper, Ghost-Live and Star Kitchen & Friends. There will also be set break performances by DJ Soul Sister, the host of renowned New Orlean’s radio show “Soul Power.”

Oteil Burbridge of Oteil & Friends is the celebrated bassist of Dead & Company — among his “friends” are Melvin Seals of the Jerry Garcia Band and Eric Krasno of Soulive. Poppa Funk & The Night Tripper is a collaboration in tribute to the late Art Neville and Dr. John, two trailblazers in the New Orleans jazz community who died last summer.

In addition to the music, Shah says, the famed New Orleans live painter Frenchy will be capturing the event and displaying a gallery. At least one of his paintings done during Denver Comes Alive will be auctioned off with proceeds benefitting Backline, an organization dedicated to getting music industry professionals mental health resources, and Conscious Alliance, a nonprofit that targets hunger and food insecurity.

As any local music fan could tell you, Denver is a natural next step to host the concept of the successful Brooklyn Comes Alive and the energy of the musical community of New Orleans, simply because the city knows how to support good music. “There will be bands that do only x amount in major markets like New York City and Chicago. They’ll do three, four or five times that number in Denver,” Shah says. “That’s not because Denver has a bigger population.”

There you have it — there are few cities as willing as Denver to experiment in music, and for that we’re being rewarded with the opportunity to witness the ultimate experimentation among musicians of all genres and styles. Catch it if you can.

Denver Comes Alive starts at 6:30 p.m. on Friday, January 31. Doors are at 6 p.m. Tickets for the show can be purchased here.