Carboy Winery Is Putting Colorado Wines on the Map

When looking at a wine list the ones that typically jump out at you are from regions like Italy, France, Spain or California. These regions have been producing wines for many years and are well-known for varietals like Chianti, Bordeaux and Chardonnay so it feels natural to order a glass. When winemakers originally started producing wine on the Western Slope of Colorado they tried to compete with well-known wine-producing regions like these and planted varietals that did well in states like California, Oregon and Washington. These varietals didn’t do quite as well in the Rocky Mountains due to cooler temperatures, a shorter growing season and high elevation so the region’s wines didn’t make it big like those from Napa or Sonoma. Even though the grapes have since been replaced with varietals that grow better in Colorado, the stigma of mediocre wine still remains. After several years of education and experimentation, Eric Hyatt and Craig Jones of Carboy Winery are trying to change that. “We’re at the very beginning of something really exciting here in Colorado and are excited to introduce our wine to more people from out of state,” said Jones. 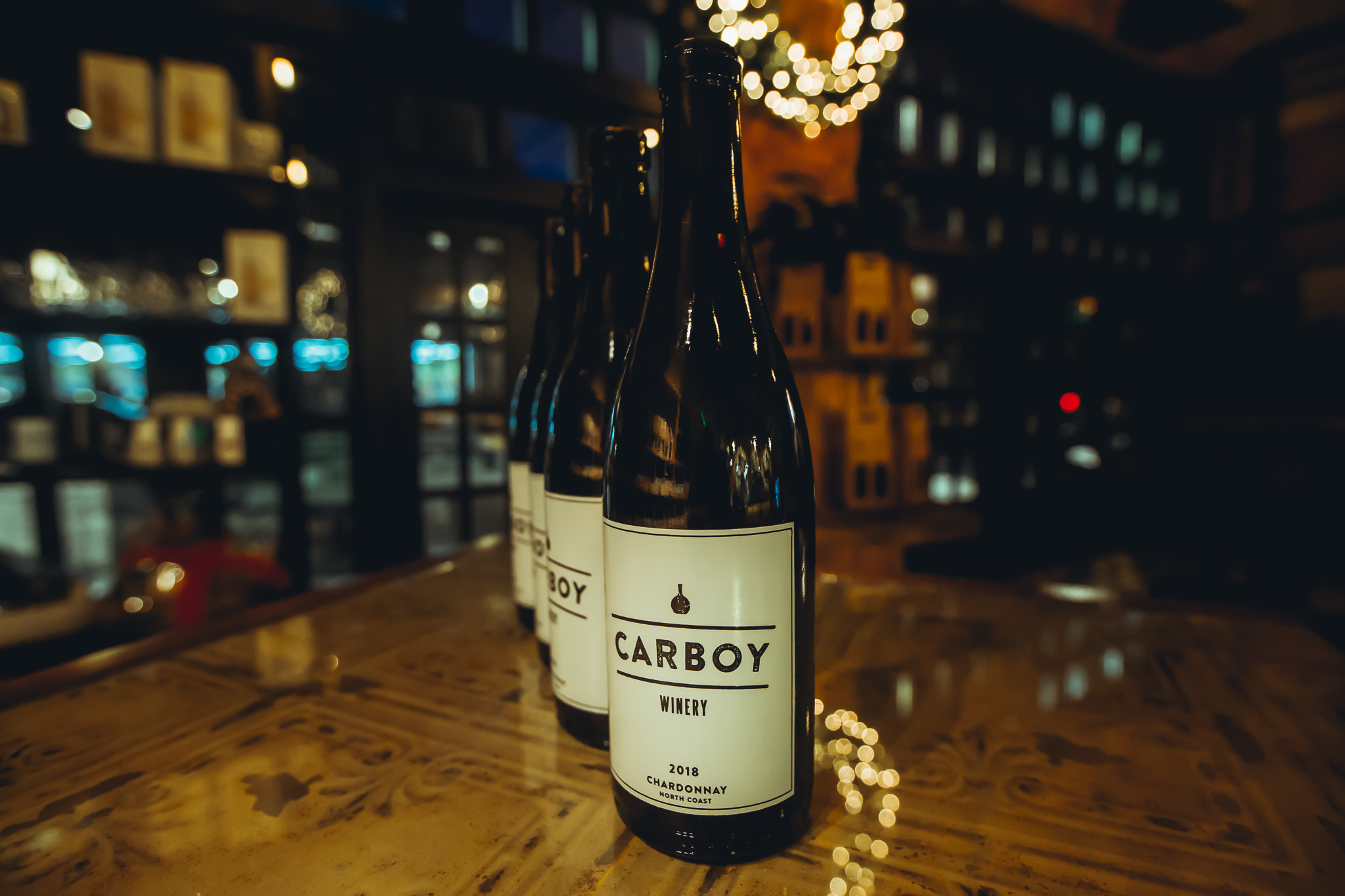 Hyatt and Jones started working together at Outback Steakhouse in the ’90s and have been great friends ever since so when Jones decided to start his own venture, Hyatt was all in. The duo first took over the 40-year-old Angelo’s Tavern in Denver in 2013, renamed it to Angelo’s Taverna and later opened another in Littleton. When an adjacent parcel of land became available to the Littleton space in 2016 they opened Carboy Winery. They began purchasing grapes from vineyards, aging them in barrels and creating their own unique blends with winemaker Tyzok Wharton. In its first year, Carboy produced 16 tons of wine and grew to produce 160 tons in 2019 with two additional locations – Breckenridge and now Denver. 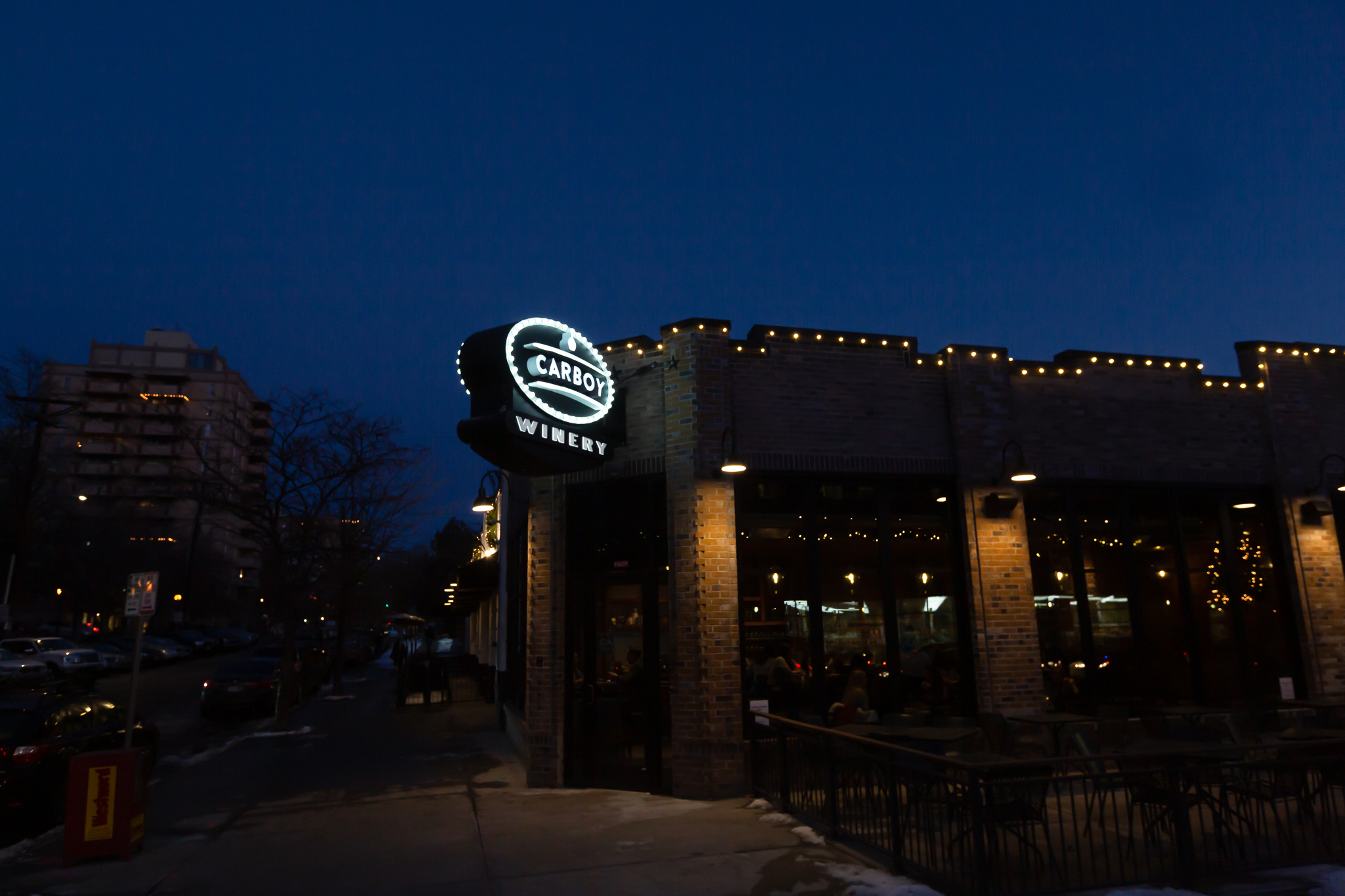 The winery has a vintner’s license – the first one being used in the state – which allows a wine producer to serve food, beer and liquor in addition to wine – which they are taking full advantage of in the new 16,000 square foot space. The new Denver space opened in September in the former Govnr’s Park Tavern location and includes a taproom, tasting room, private event space and the new restaurant Logan Street. Each space has a distinct look and feel and is decorated with the vessels that traditionally fermented and stored wine – called carboys.

The taproom is always bustling with wine drinkers and has an extensive list of appetizers and entrees. If you walk through to the tasting room you’ll be able to step up to the bar for a tasting or you can even rent out the seating area for a small party. The tasting room also serves as a retail shop where you can purchase a one-liter carboy for $7 and get it filled with one of the 12 wines on tap or purchase a bottle. New restaurant Logan Street is the largest portion of the building – it can seat up to 140 guests in the dining area and an additional 40 on the patio. The restaurant serves all of Carboy’s wines on tap as well. Kegging and tapping the wine that’s sold for consumption in the winery and restaurant rather than bottling it keeps the wine fresh and minimizes waste since it’s not exposed to oxygen until it’s poured. “I want to offer our guests a product they can rely on,” said Hyatt. 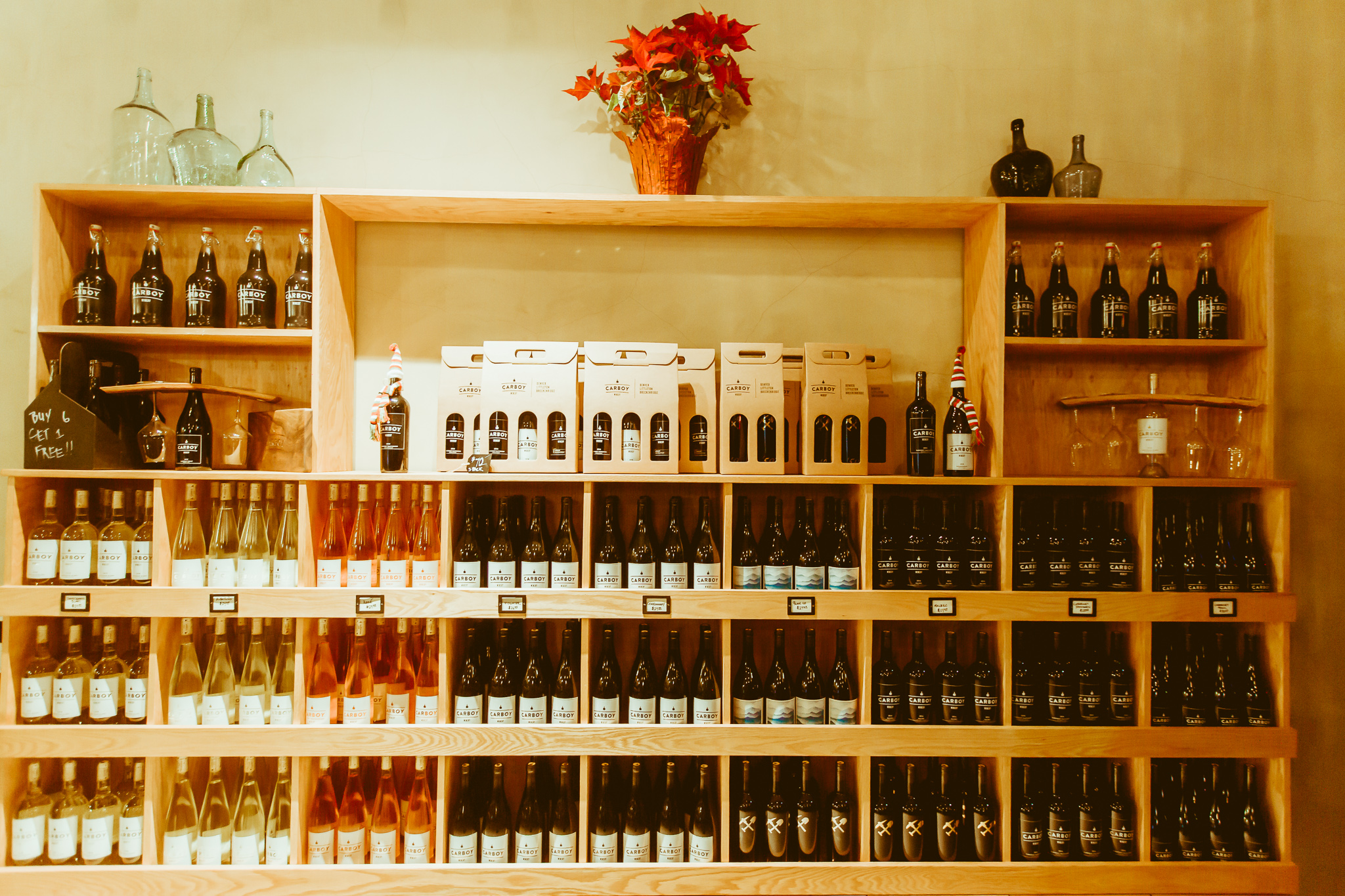 Behind the tasting room, Carboy also houses a small production facility where you can find wines aging in barrels and large kegs filled with various reds and whites. Jones explained that they recently acquired North America’s first 12hL Hungarian oak cask that they brought in to age Tempranillo and Cabernet Franc. “It has a 20-year shelf life and can give a nice amount of oak to our Cab Franc or Tempranillo. We broke it in with a nice Cab Sauv but are really going to focus on the Cab Franc and Tempranillo,” said Jones.

When Hyatt and Jones originally started making wine they purchased most of their grapes from out of state – Oregon, Washington, California and even overseas. Now they are using mostly local varietals from Grand Valley and other areas on the Western Slope. “It takes three years from when you plant the grapes to be able to use them, so now we’re getting some of the varietals that were planted when we started working with these wineries and they’re great,” stated Jones. Colorado wines tend to highlight the terroir of Colorado that comes from high elevation, a dry climate and a short growing season. Some of the best wines here come from grapes that thrive in similar climates like Portugal, France and Italy and include varietals such as Albarino, Malbec and Cabernet Franc.

Continuing to add to its ever-changing wine list Carboy plans on producing several kinds of sparkling wine at a large scale –  something Jones hopes to be a first for Colorado’s wine scene. “You really can’t go anywhere and find Colorado sparkling wine, so we want to be the first to produce at scale,” stated Jones. Carboy will produce a mid-level, pettinet sparkling wine as well as a high-end product produced with the champenoise method.

In order to try Carboy’s newest wines, it may be worth becoming a wine club member. Members get to try the reserve and small-batch wines which are rarely offered to nonmembers due to the size of the wine club. Carboy offers two tiers of wine club memberships – the Lode and the Mother Lode – depending on how much wine you want to receive each quarter.

Whether you’re looking for a unique date night experience, a delicious and affordable meal or an easy place to go for happy hour Carboy has your back – and your wine.