Sunday night may not be a popular night for a party, but that didn’t stop platinum-selling artist Post Malone from showing Denver a good time. The Grammy-nominated artist made a stop in Denver on Sunday as part of his “Runaway Tour,” which began in early September. The tour follows the release of his third album, Hollywood’s Bleeding, an album that places the pop-artist at the top of the charts and solidifies his position as a cultural icon – though there wasn’t much room for doubt in regards to his status before. 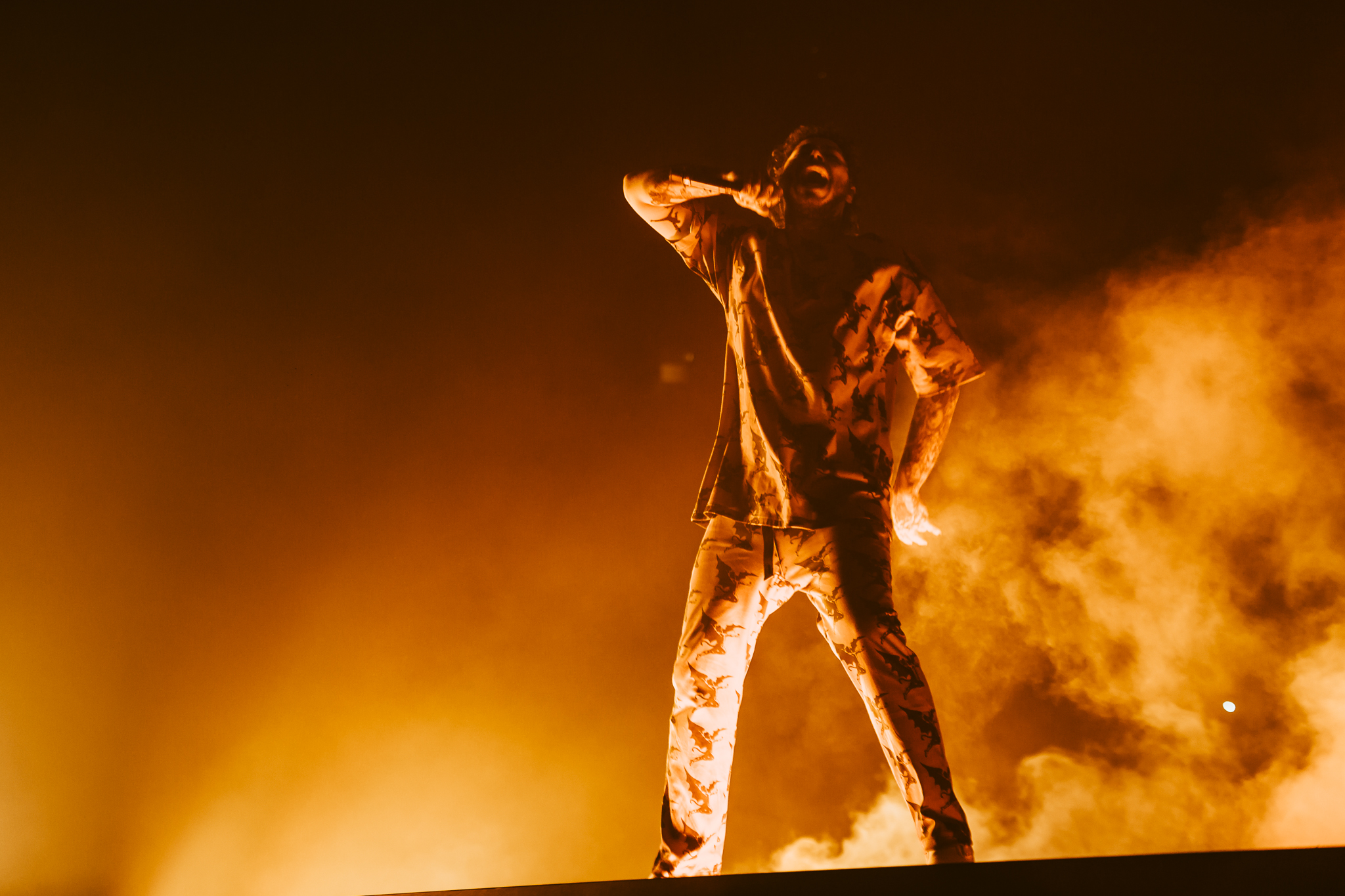 The Grammy-nominee is far more than just a hip-hop artist. He takes Jimmy Fallon to Olive Garden, spends time with pop star Justin Bieber and tempts fate by touching cursed items on Ghost Adventures and consequently suffers a string of bad luck – including crashing his Rolls Royce and miraculously stepping away unharmed. Post Malone is an enigma, and his larger-than-life persona has charmed its way into the hearts of his fans. While he might tend toward the theatrical, he’s nothing if not authentic – and his performance at the Pepsi Center on Sunday night highlighted both of those qualities perfectly.

Up-and-comer Tyla Yaweh opened the night with a high-energy set that got concert-goers on their feet. Joined by his DJ, Yaweh ran up and down the stage as his lyrics electrified the audience. Though he got the party started, Yaweh also found moments to be honest with the crowd. Thanking the audience for allowing him to share his music, he reminisced on the road that led him to be there, which included a period of homelessness. 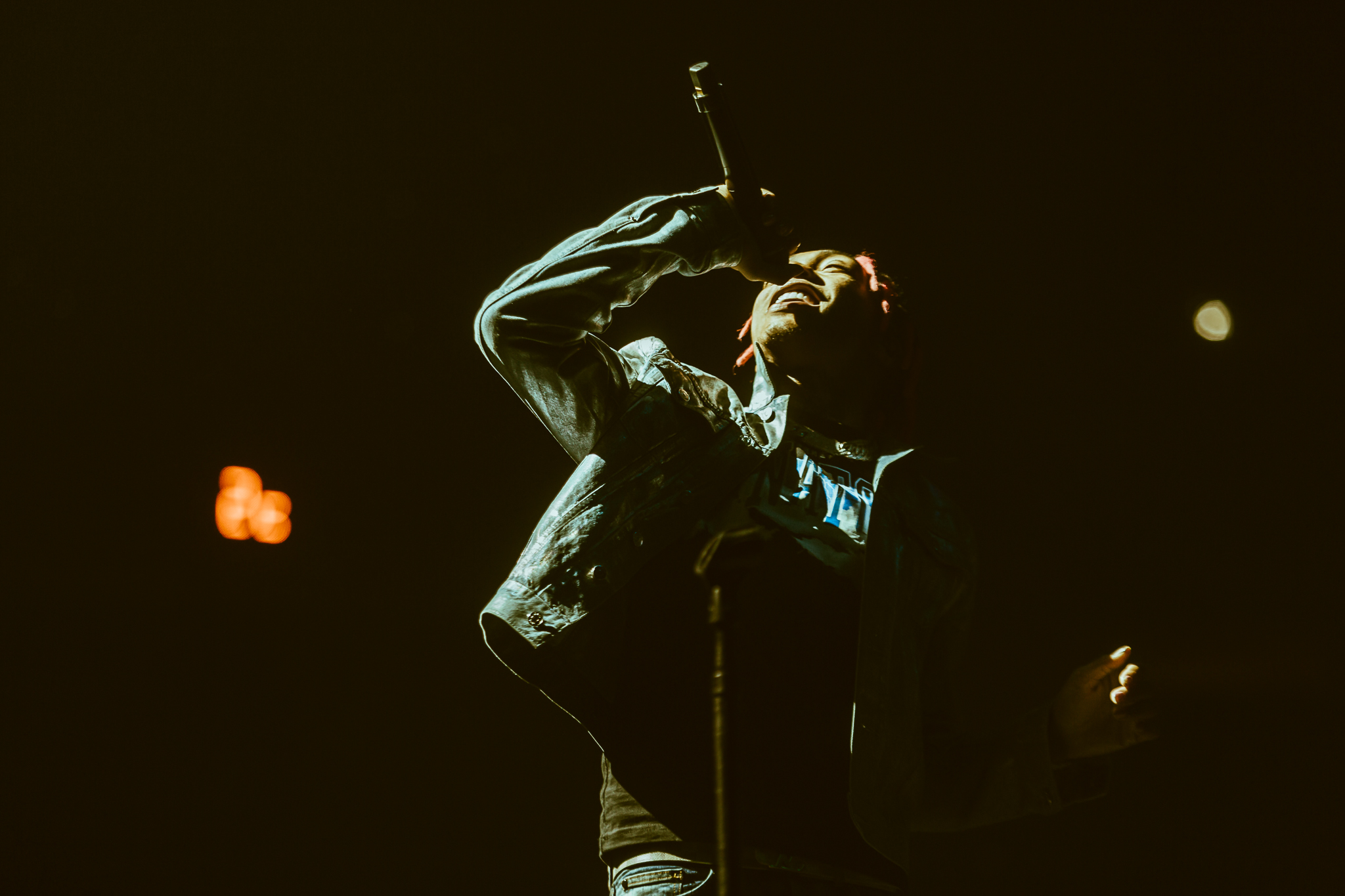 Truly grateful for the opportunity, Yaweh basked in the moment, leaping off stage to dance in the crowd during the final song of his set before projecting his phone number onto a jumbo screen behind the stage and encouraging fans to contact him about his music.

Considering the number of dedicated fans in the audience, it came as no surprise that the crowd was excited when Swae Lee took the stage. After being featured on one of Post Malone’s songs,  Swae Lee made a perfect opening act for the headliner. Joined by a dancer on stage, he jumped across the stage tossing flowers into the audience. His enthusiasm infected the crowd who sang along to nearly every song. 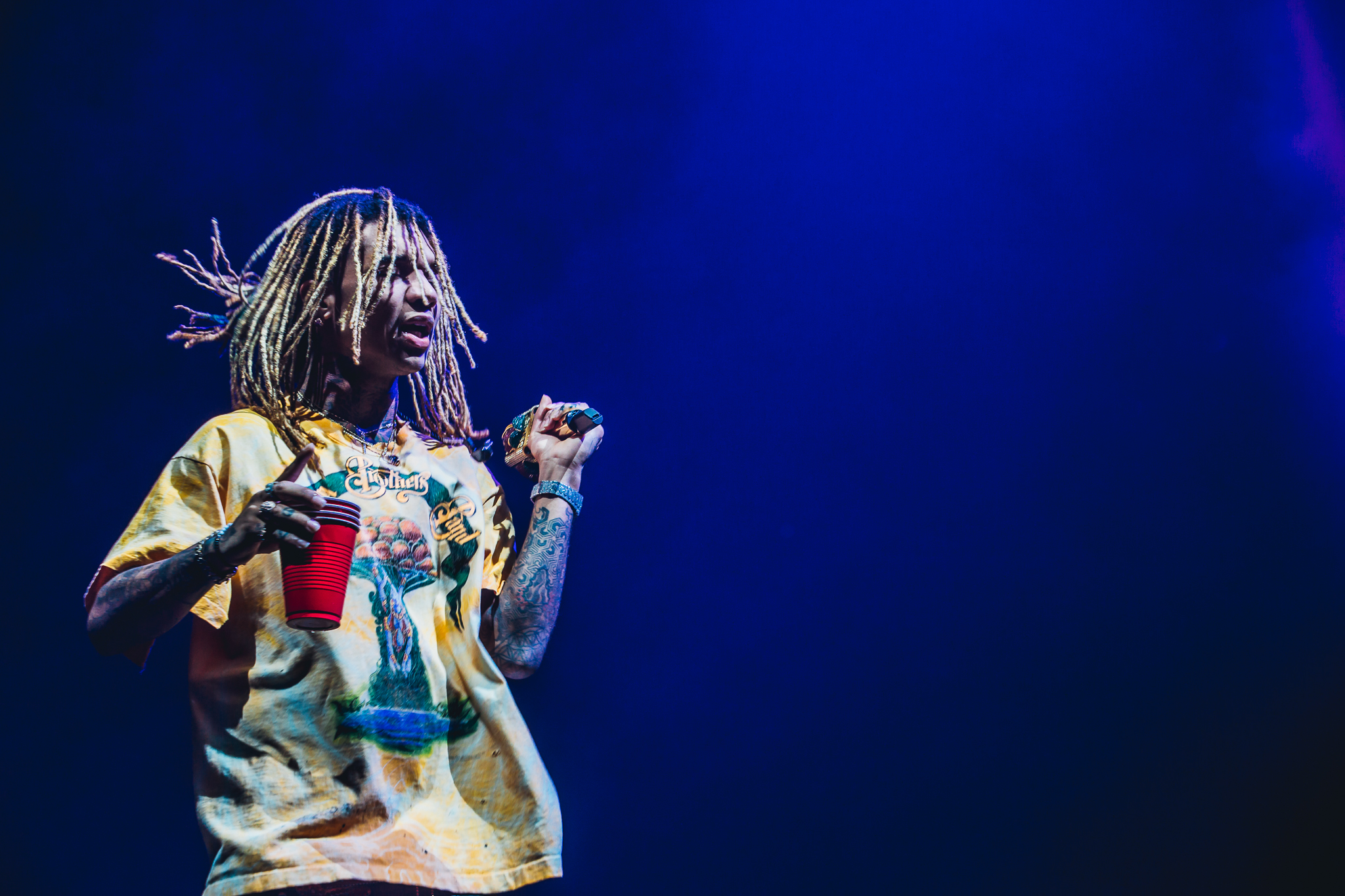 When the lights finally dimmed, the thunderous applause of the audience became deafening. Rising out of the floor of the stage, Post Malone immediately launched into a performance of the title track from his most recent album as fireworks exploded behind him.

Taking time to introduce himself to the audience as Austin Richard Post, the icon made sure to look out over every fan in the crowd. During the brief pauses between songs, he made sure to give a bit of background, informing his fans about the meaning behind each song. 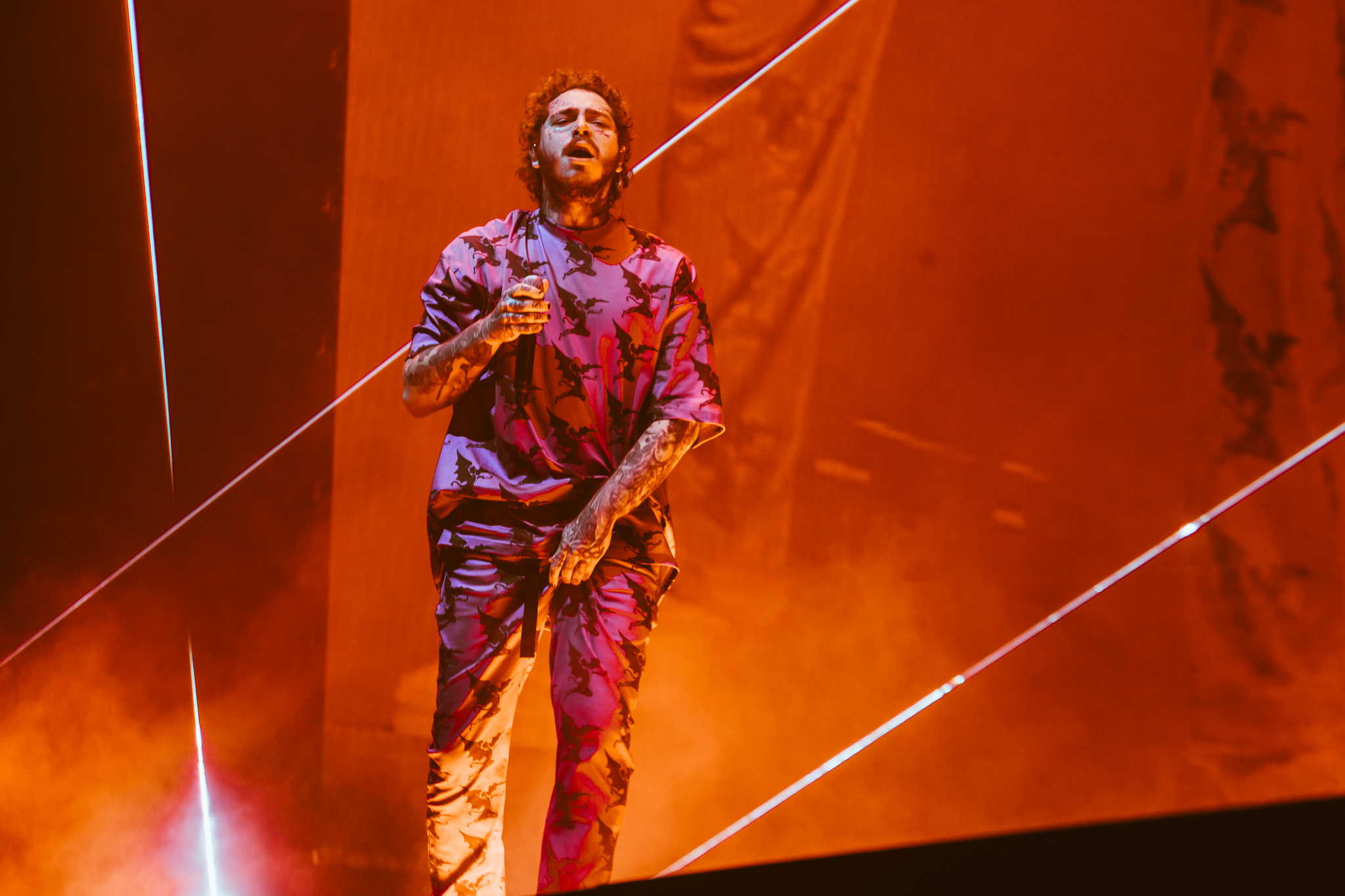 Despite the spotlights dancing overhead, it was almost impossible to look away from Malone as he danced along the stage, drink in hand. Playing fan-favorites from each of his albums,  his set begged concert-goers to get on their feet and sing along – and that’s exactly what happened.

As fireworks continued to explode behind him, Malone blazed through his performance with the confidence of an artist who has been on stage for the decades – perhaps he was just born to entertain. It was clear that Malone felt genuinely honored to be able to perform for his fans. Thanking them repeatedly for their support, with a smile painted across his face, he appeared comfortable in his element. 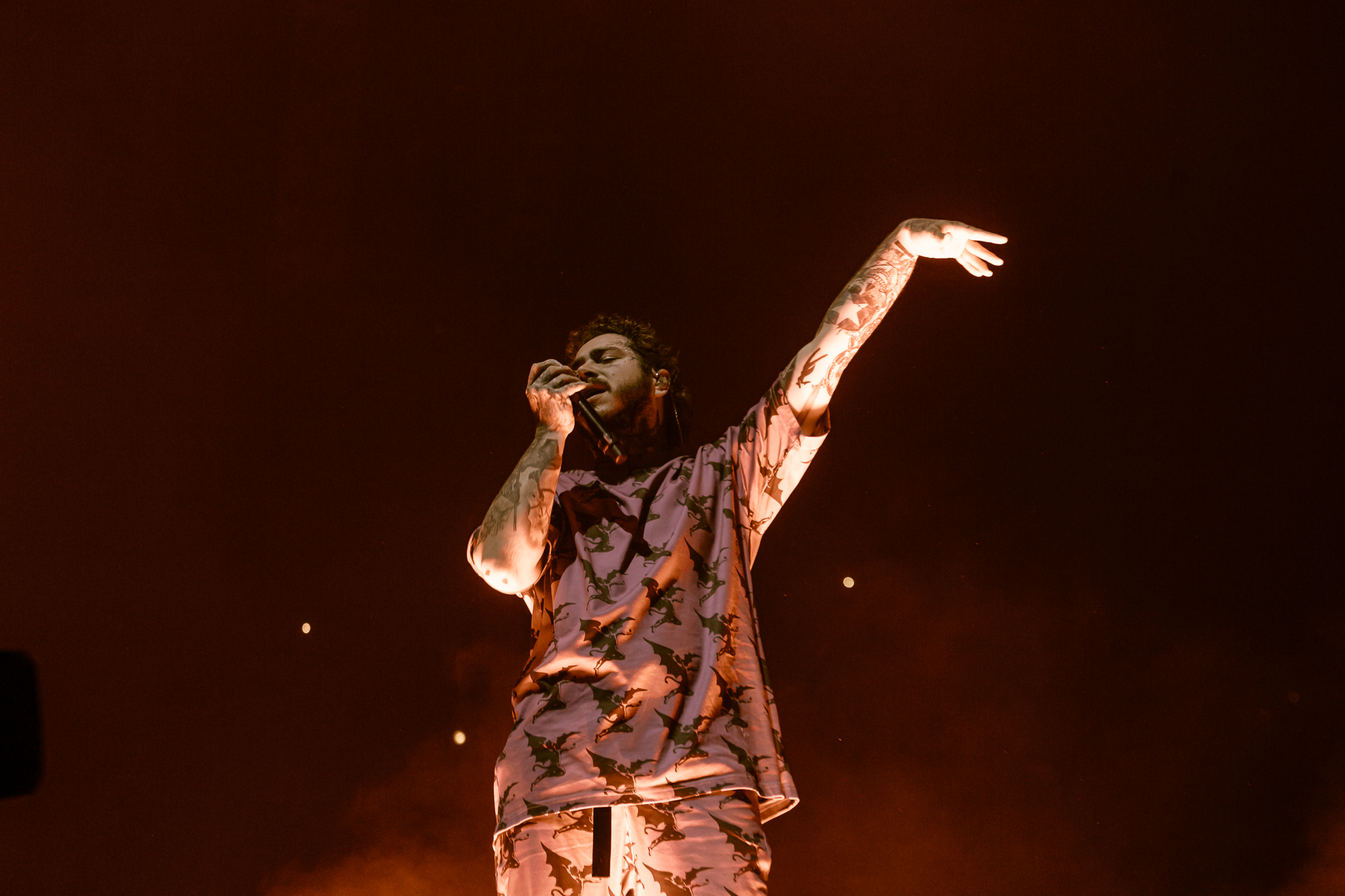 Though the night eventually had to come to an end, Malone refused to go quietly. Closing out the evening with his most popular songs, he raised a glass to fans during his performance of “Rockstar.” As the song reached its crescendo, Malone raised an acoustic guitar over his head before smashing it onto the ground. As the guitar lay scattered in pieces across the stage, the solo artist raised his cup before pouring some out on top of the broken guitar.

Closing out the evening with “Congratulations,” Malone floated across the stage soaking in the moment. When it was all said and done, reluctant fans cheered on even as the lights came on and the house music played, signaling the official end of the performance. The evening came to an end all too soon, and if the fans response is any indication then it should be clear that Denver can’t wait for Post’s return.

All photography by Brandon Johnson. View the full gallery here.

Top Chef Carrie Baird on Her Departure From Bar Dough

VHStival and 30 Things To Do in Denver This Week