After enduring a week of pitch-black evenings brought about by daylight savings, earth-dwelling creatures began their varied ritualistic practices of settling in for the winter. Bears burrowed into their humble abodes, mice made homes out of mittens dropped in the snow and Denverites trekked to the romantic, wistful Paramount Theatre to see Ray LaMontagne spin his space-folk lullabies live.

The songwriter’s latest staging of his “Just Passing Through Tour,” was just what the doctor ordered to cure seasonal depression. In front of a simple painted backdrop depicting a seascape — which stage lights cast in dazzling twilight hues — Ray LaMontagne’s breathy and passionate voice resounded throughout the theatre’s art-deco interiors. His only accompaniment — besides his own acoustic guitar and harmonica — was guitarist Carl Broemel of My Morning Jacket. Together they produced sparse yet textured renditions of songs from all across LaMontagne’s discography, imbuing the atmosphere with a sense of freshness and familiarity. 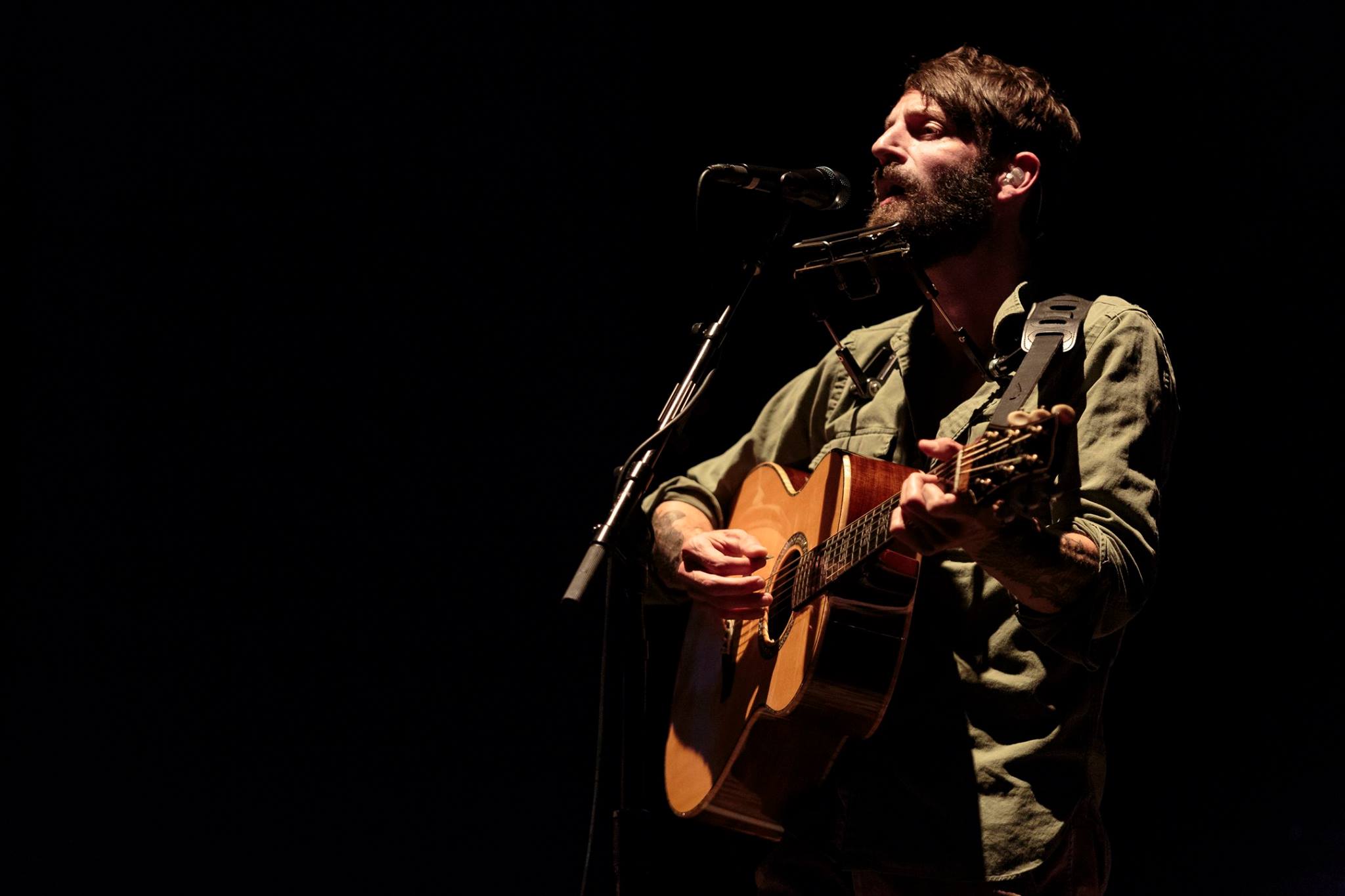 Photo by Brian Stowell and courtesy of Ray LaMontagne’s Facebook

The night’s entertainment began with Kacy & Clayton, a folk-rock family duo from Saskatchewan whose overt and unpretentious talent was on display in front of the red velvet curtains. Their quirky and unscripted stage presence was offset by their impeccably tight vocal harmonies, most exquisitely displayed in songs like “Go and Leave Me.”

After touring alongside Wilco a few years ago, the duo began recording and producing their albums with the band’s lead guitarist, Jeff Tweedy. Incidentally, Wilco’s only other constant band member, John Stirratt, was LaMontagne’s sole accompanist for the 2018 tour dates of “Just Passing Through.” Kacy & Clayton’s new album, Carry On — produced by Tweedy — was released on October 4.

When the curtains unveiled to present LaMontagne and Broemel, they wordlessly launched into “Be Here Now” from the former’s 2006 album, Till The Sun Turns Black, and meticulously moved through nine other songs, pulling content from five different albums. LaMontagne interrupted this first dreamy stream of music-making only once — between “No Other Way” and “Beg Steal or Borrow” — to utter a hushed “love you too” to a fan.

In fact, this was one of only four times he spoke to the crowd all night. (The other three include his introduction of Broemel and his giving-thanks to the audience, which he did twice.)  LaMontagne modeled a focused, peaceful behavior that the audience buy-in-large respected. This was not a night for chit-chat or for folk hero worship. Instead, it was an evening devoted entirely to the sharing of music, and the artist let the songs speak for themselves.

LaMontagne’s decision to swap the buzzing euphoria of arenas for the gorgeous intimacy of smaller venues suits this style of concert well. The attentive and comfortable silence that overtook the Paramount Theatre’s patrons on Saturday night let the musicians concentrate on subtle sonic details. They performed for Denver as intensely and precisely as they would in a studio recording session, resulting in a rare and mesmerizing live music experience.

The concert shifted to a more momentous, unofficial second act with the rendition of “Shelter” from LaMontagne’s debut album. This was the headlining artist’s best singing performance of the night so far. His delivery proved that his airy raspiness is an evocative asset instead of a technique to disguise a lack of power. He followed up this act with “Airwaves” and “Supernova,” which are from the more experimental 2016 album Supernova and feature vocal percussion.

To close his performance, LaMontagne indulged the audience in crowd-pleasing hits. “Trouble” received a standing ovation even before he walked offstage and effectively ended his set. Most of the audience stayed on their feet once he came back minutes later to give a three-song encore whose centerpiece was his lyrically poignant track, “Jolene” (not to be confused with Dolly Parton’s song of the same name).

While the satisfied and contemplative fans trickled out through the aisles, one woman said to another, “that was old-school Ray.” Indeed, he gave Denver a stripped-down, sonic equivalent of comfort food right when we’ve developed a seasonally appropriate taste for nostalgia and timelessness.