Q&A – Mayday Parade Speculates On The Future Of Emo

Skinny jeans are in style, Sad Summer Fest filled the void left by Warped Tour and My Chemical Romance is getting back together. If there was ever a sign that emo was making a comeback then these might be all the proof you need. So grab your eyeliner and your favorite neon cartoon monster merch and get ready to celebrate all things emo. How do we plan to celebrate the genre that refused to die? This week, we’ll be celebrating with genre icons Mayday Parade when they bring their “Forever Emo Tour” to Denver.

The scene veterans take the stage at the Marquis Theater this week for an intimate show, unlike anything that’s ever been done within the genre by any other band. Before that show, we got a chance to catch up with guitarist and founding member of the band Brooks Betts to talk about the tour and how the scene has evolved. 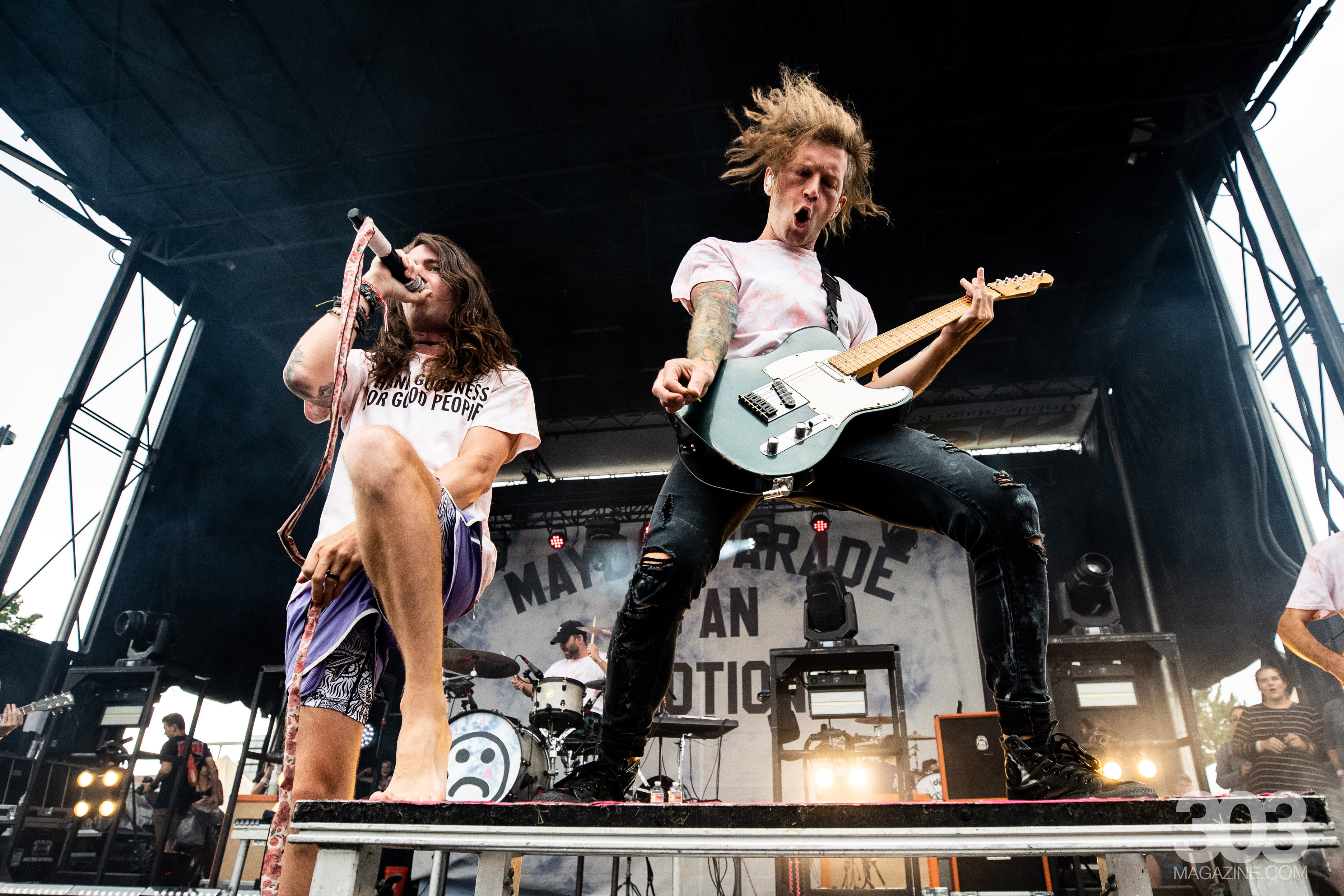 Brooks Betts: Yeah. We’re right smack dab in the middle of it. It’s great. We’re doing two shows – we wanted to do the 10-year anniversary of our second full length, Anywhere But Here, but we also wanted to make it select shows and kind of limited. So we did five of those and then to get us around and make sense out of doing a whole fall run, we did emo nite shows where we’re doing cover sets. It’s a new idea we’re trying out, it’s like a special event. We play a lot of people’s favorite emo songs as if you were going to an emo nite, but we actually play and sing them.

303: This is a unique tour because it’s really two tours rolled into one. Can you talk to me a little bit more about that?

BB: We wanted to be able to get from the big cities where we thought it would be best to do the 10-year anniversary shows. This just helps make sense out of bridging the gap as well as keep us busy during the fall – as well as providing something new and interesting. It gives us time to experiment with something new and different by doing the “Forever Emo” shows. It’s a lot of fun. I think fans really appreciate it. For the small markets we’re doing an underplay form, so we’re doing small rooms for that. People are enjoying it and they’re having a great time and they’re selling out. 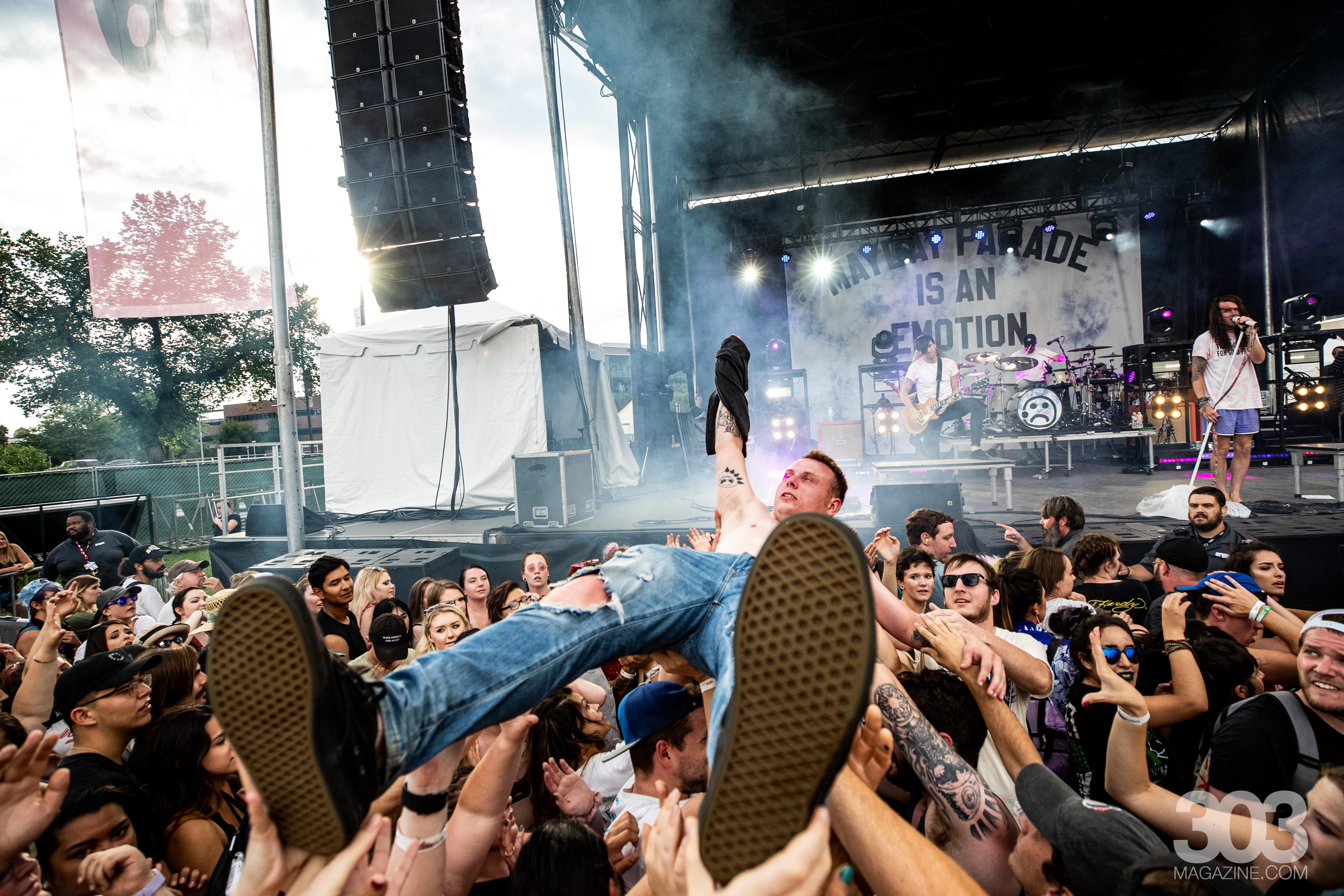 303: You’re celebrating the 10th anniversary of Anywhere But Here, your sophomore album. How does it feel to have fans still celebrating your early music?

BB: With so many records under our belt now, we don’t play a lot from each record. You end up playing more favorites, you know? Compiling a setlist and condensing our discography into an hour and a half – so, being able to do an album like this front to back is something that you wouldn’t normally do. There’s a lot of fans of that record that are super stoked to see it front to back. We had to almost relearn that record, you know? Because we never play half of those songs. It’s a special thing that we get to experience with our fans and get to feel what that was to do that record and the importance of it to our fanbase.

303: The majority of the time you’re on tour will be for the “Forever Emo” tour. How did you decide that this was a tour you wanted to do? 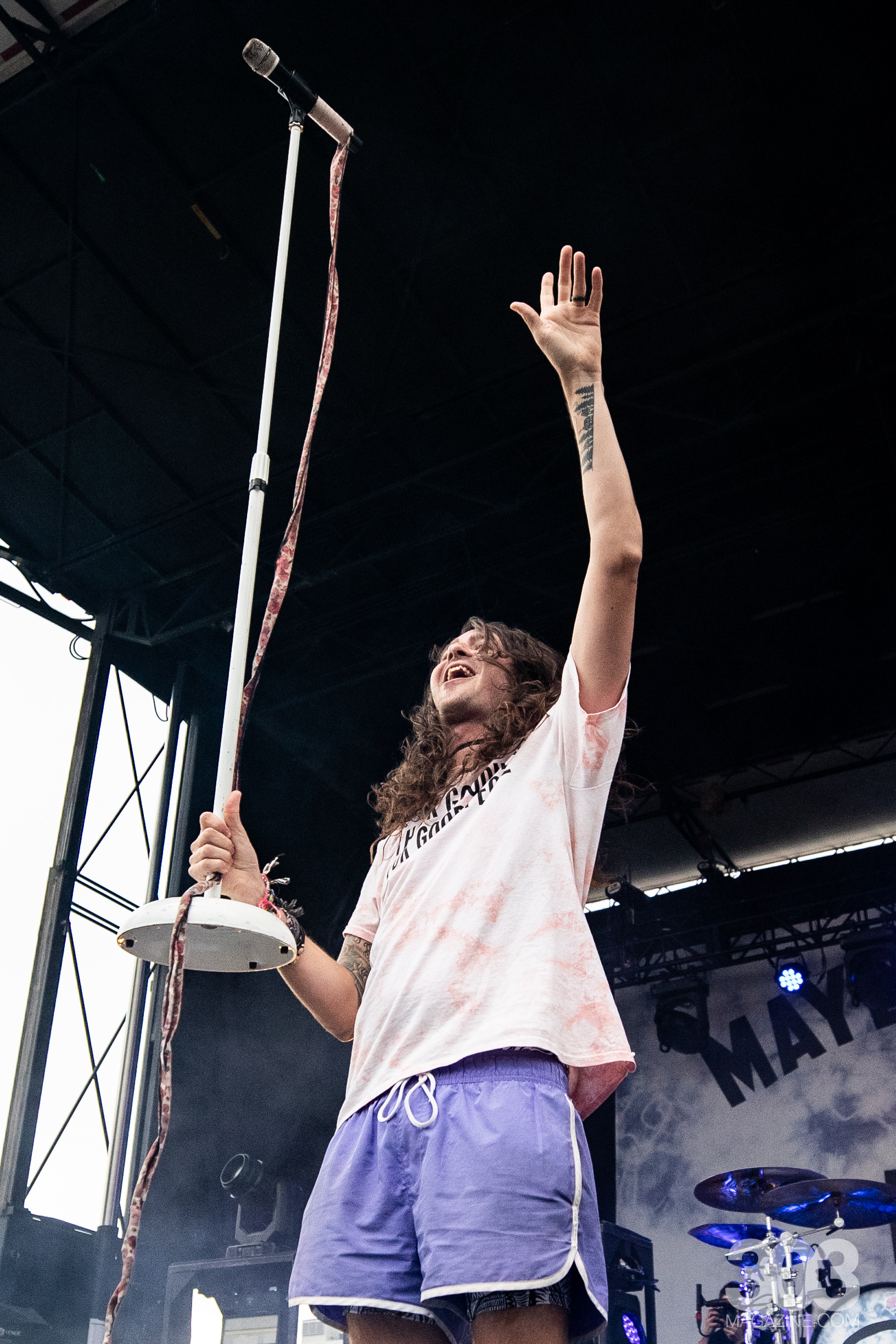 BB: It was a cool idea that we had. We knew no other band had really done that. There are some cover bands that do that, but there is no band like Mayday Parade – that normally plays original music – that had gone out and done this. So, we decided that we would try and be the first to do it. We wanted to jump on it and make it a thing early, you know what I mean? As opposed to waiting too long and waiting for someone else to think of the idea themselves. Which, of course, I’m sure other bands are going to try it now that they’ve seen this. I thought it was just a great time to try and get it out. We do a lot of these Emo Nites, where we do actually go up and we do actually DJ and we have had fun with them. At first, you think it’s kind of a lame thing, and it is still kinda weird I guess just coming from a musician’s standpoint, you know? You kind of automatically turn your nose up at the DJ thing as a whole, but we have a lot of fun with that. So, we wanted to make it more of a real thing and see how that went with our fans.

303: The band was also very involved with the inaugural year of Sad Summer Festival this year, which was a celebration of all things emo that lasted all summer. What was that experience like?

BB: I think in general, the emo thing used to be something you didn’t want to necessarily be a part of. I think it was because it was such a niche thing you felt like it pigeon-holed your band. It also was something that was easy to make fun of I guess, because it was different. So, for a long time, you almost tried to disenfranchise yourself from that whole scene, even though that’s exactly what we were. I guess, like all good things, they come back around in a nostalgic sort of resurgence of popularity. I think at the end of the day you just have to embrace it. I guess that’s part of the mentality behind putting things out there like that and not hiding behind just saying “Oh, we’re a rock band” or something. Just embracing what the fans call it, even if we’re just writing music and we don’t necessarily aim to be emo. If you think about it, country music is probably some of the most emo music I can think of, but they don’t call it that. So, yeah, that’s the whole thing. Of course, we’re going to keep touring with bands like The Maine, State Champs and be a part of that scene. That’s who we are and that’s what we’ve done for 14 years. There’s no sense in trying to change that too much. I think we evolve as musicians, but at our roots, we’ll always be a part of the emo scene.

303: 2019 seems to be a year of emo resurgence. Despite the end of Warped Tour, we had Sad Summer Festival, the rising popularity of emo nite and MCR is getting back together just to name a few. Do you think there’s a reason why we’ve seen a recent uprise in the presence of emo?

BB: I think that you’re going to see it with the classic bands. Hopefully, we are a part of that. Bands that, you know, can stand the test of time. But, I don’t know. I think there are some great bands out there that are up and coming. Grayscale is a band that we’re friends with and I think they have really great music. I think they’re doing really good things and I think that emo music is evolving as a whole too. So, as you know it as the older scene with bands like My Chem or Mayday Parade, it’s not going to sound like that era but it’s going to be an evolution of that. Bands like Grayscale is a good example of that. They’re a band that I think is going to move up in the scene. I think State Champs is another great example of the resurgence of it. The pop-punk revival is also kind of a thing. That’s kind of an interesting scene in and of itself too. It’s like you’ve got these subgenres, but we work together – we can play and go on tour together. It’s hard to say. I wish I could put my finger on what I thought would be the next big band out of the scene. It’s hard to say. I hope it doesn’t go away. I think in some form or another, whether you call it emo or pop-punk or punk, it’s not going away, it’ll just be a new form of it.

Do you have a favorite emo song?

BB: Yeah. It’s actually really funny. One of my favorites that we play is “Screaming Infidelities” which is Dashboard Confessional. It’s interesting for us – when we were coming up and learning to be a real band in high school and stuff, that song was a big inspiration and everybody knew that song. That really does show you the evolution. A lot of people at our shows do know that song, but it’s not the way that we know it. It’s interesting. Either way, it’s my favorite song to play up there. I guess that’s a good example too of the evolution of the scene and how things have changed. 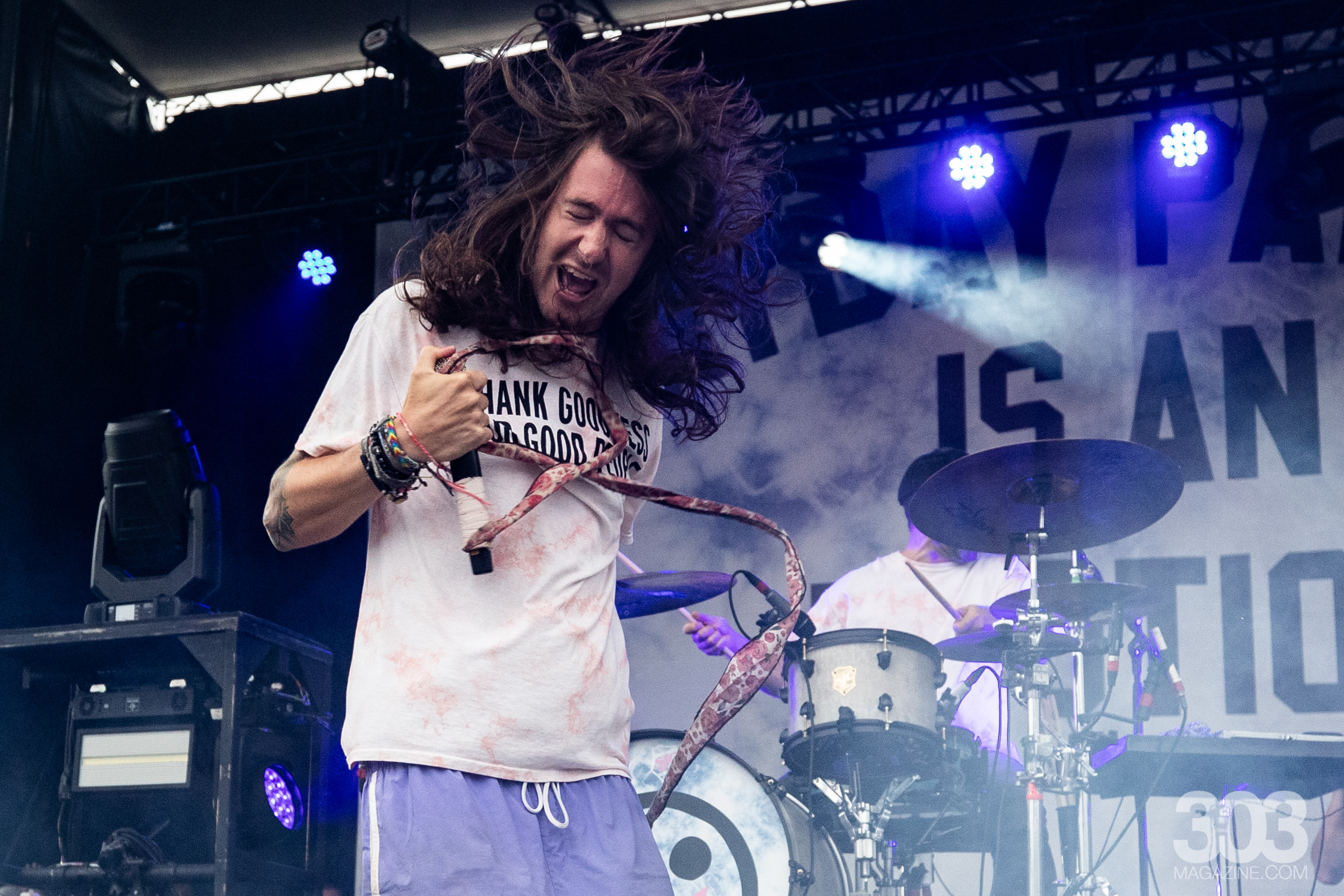 303: We’ve talked a lot about playing covers, but I do want to talk briefly about some of your original music. Can you talk to me about the music video for “Looks Red, Tastes Blue” which you recently released?

BB: We try to come up with interesting ideas. But it can be difficult because you never know what the director is going to do with it and how it’s going to come out. I think that one came out really cool. We try to limit ourselves a little bit from the acting side of it because, well, we’re not actors. So it’s cool to have other people involved with the video, you usually get better emotion out of it that way in my opinion. I guess we do what we do best and just kind of rock out. I think that song, it’s interesting, that’s a song that we weren’t so sure if we were going to put on the record. Later, it became a 13th song and made the album pretty extensive at that point but it was a good move. We were like, let’s take a risk on this one, and it’s been cool to see fans gravitate towards it.

303: I know that fans likely won’t get to hear that song on the “Forever Emo Tour” since you’re playing covers. What can you tell me about the upcoming show here in Denver?

BB: I think that doing these emo nites are a lot of fun. It’s not as much pressure as normal, so we have a good time. It’s cool to come to Denver anytime. It’s an interesting city. It’s a different city that has its own culture, so I guess it’s just another cool spot to hit on the way. I’m glad we were able to make it to Denver for that show. It is a limited tour, we only take certain spots for it. We may never do that show ever again, you know what I mean? So, I think people should come to check it out while we’re doing it. It’s just supposed to be a special event, especially for the fans who have seen us so many times. We have so many die-hard fans who come out to every show.

Mayday Parade will bring their “Forever Emo Tour” to the Marquis Theater on November 20. Tickets are available here.