Evelyn Evermoore Talks the Business Side of Drag, Design and More

Evelyn Evermoore wasn’t just awarded the affections of Denver’s beloved drag scene overnight. Evermoore, a drag name for Connor Whitcomb who also uses they as a pronoun, spent years building up their confidence and experimenting with their persona before they struck the right chord for themselves and for their audience. Previous winner of Denver’s Ultimate Queen challenge in 2017, Evermoore has quite a few notches on their belt with having made costumes for a RuPaul’s Drag Race winner and garnering a loving social media presence. A Thornton native, Evermoore invited us into their curated dressing room and gave us an inside look at their life through drag, the business side of drag and what they hope to bring to the queer community of Denver. 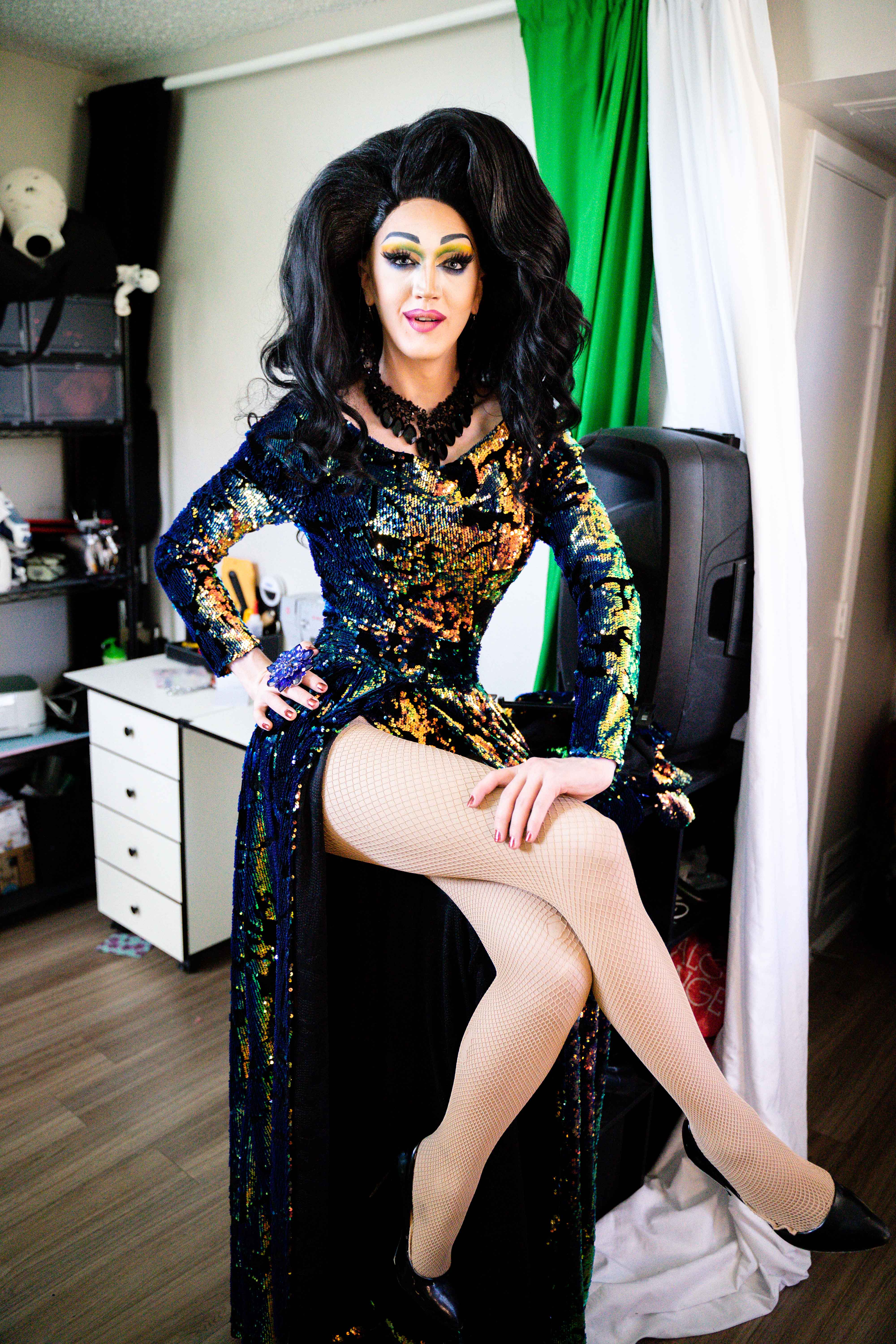 Evermoore first got involved in drag just around three years ago on Halloween. “I was watching RuPaul’s Drag Race and was a big Addams Family fan,” Evermoore explained. “So I thought, I just want to be Morticia. I put white face paint on, a very small red lip and just eyeliner. I looked like a really ugly ghost, and I hated it.”

Encumbered by “toilet paper boobs” and chunky Target boots, Evermoore hated every moment of it but something about it just kept “clicking” for them. “I never wanted to do it again, but I liked doing the makeup so I just kept going with that. Eventually, I just started doing it more often,” they said. 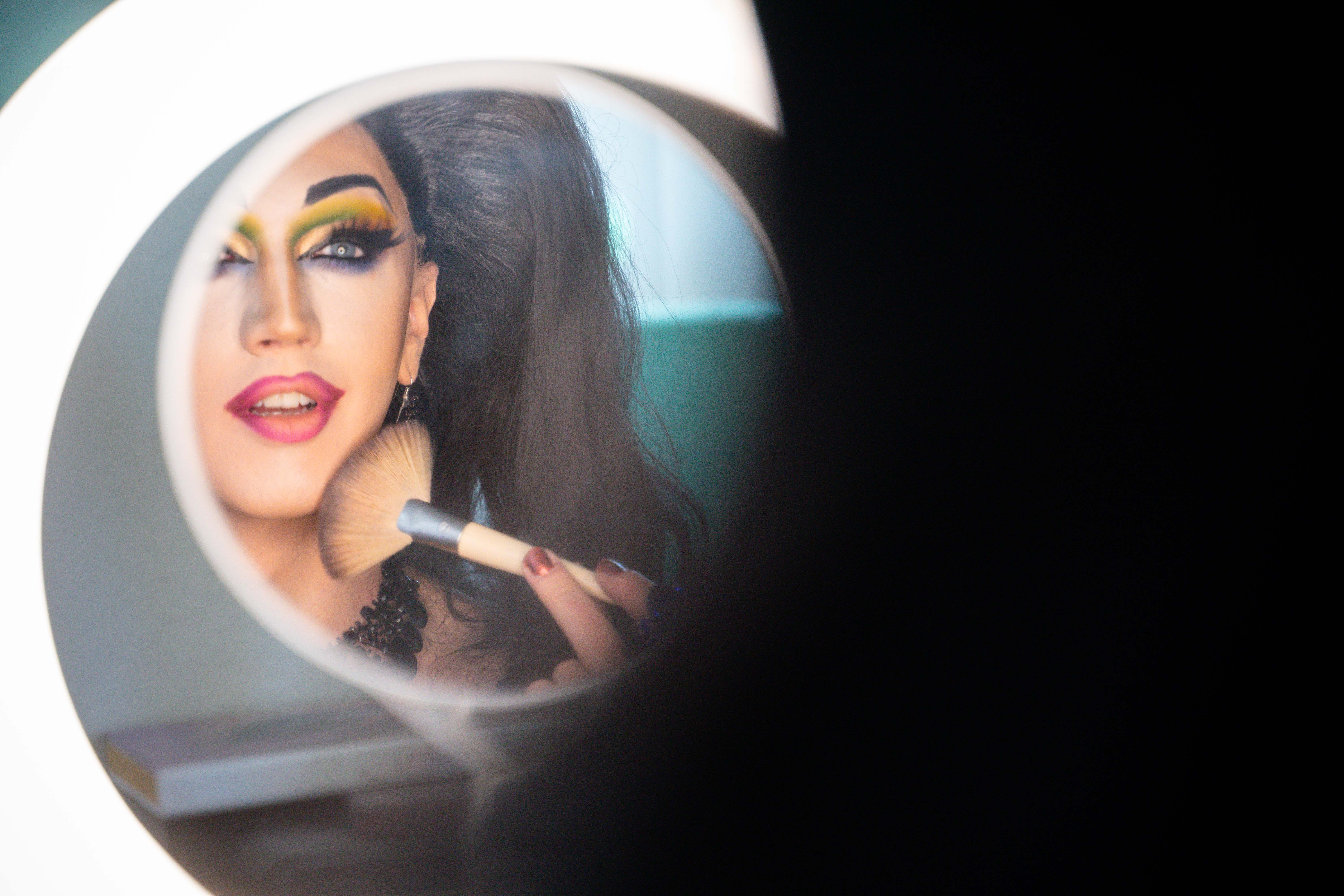 In fact, the character of Morticia Addams inspired Evermoore’s drag name. “When I started, I wanted it to be spooky like Morticia Addams. ‘Evelyn Evelyn’ came from an Amanda Palmer album titled ‘Evelyn Evelyn’ about a Siamese twin that was born [and] raised on a chicken farm. I thought that was fun. Evermoore came from ‘Nevermore,’ like Edgar Allen Poe,” they explained.

Halloween mishaps aside, Evermoore has grown a great deal since their early days, including their evolving drag persona. “My persona is very much who I am, but it wasn’t who I was when I started drag,” Evermoore said. “Drag for me was an outlet to express myself through a mask. I was a very anxious and socially anxious person. Being able to do drag and interact with people with this mask and wall in front of me allowed me to find more about myself.” 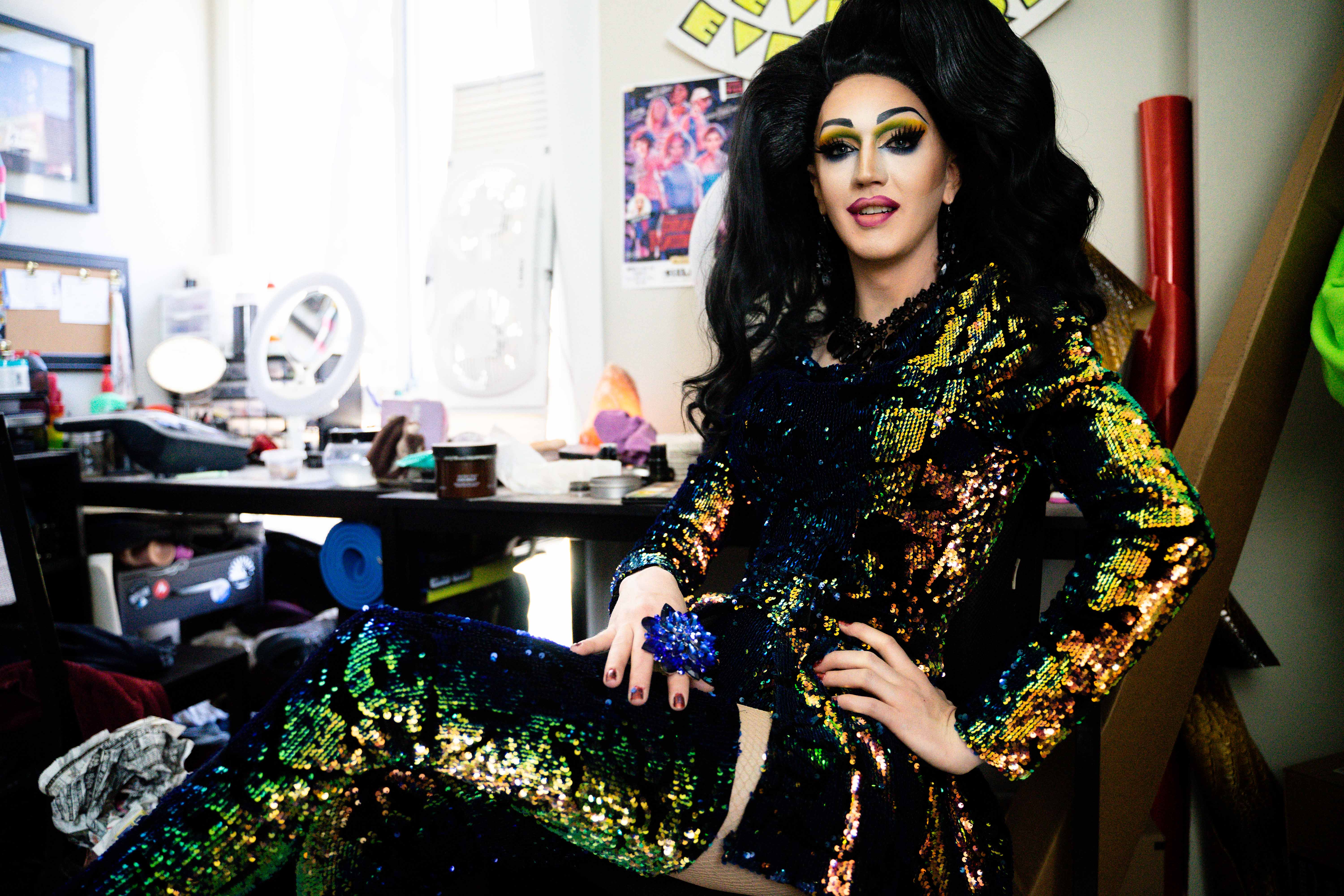 Through performing, they discovered that they actually enjoy talking to and connecting with people but were originally unsure how. “Evelyn is a very positive, very reinforcing character for people. A lot of the character comes from me having been an introvert and wishing people were giving me the space to talk when I was nervous to talk or being somebody on stage who was a dorky, awkward person and allowing myself to be that dork so people can be themselves,” they said.

Earlier this year, Evermoore participated in a speaking engagement at Denver Startup Week. Discussing the business side of drag at the event, they were able to reflect on brand development and what that entails for a drag queen. Many facets of brand building in the drag community are deeply rooted in values of entrepreneurship and the use of social media. Evermoore has crafted and implemented a modern and genuine approach. 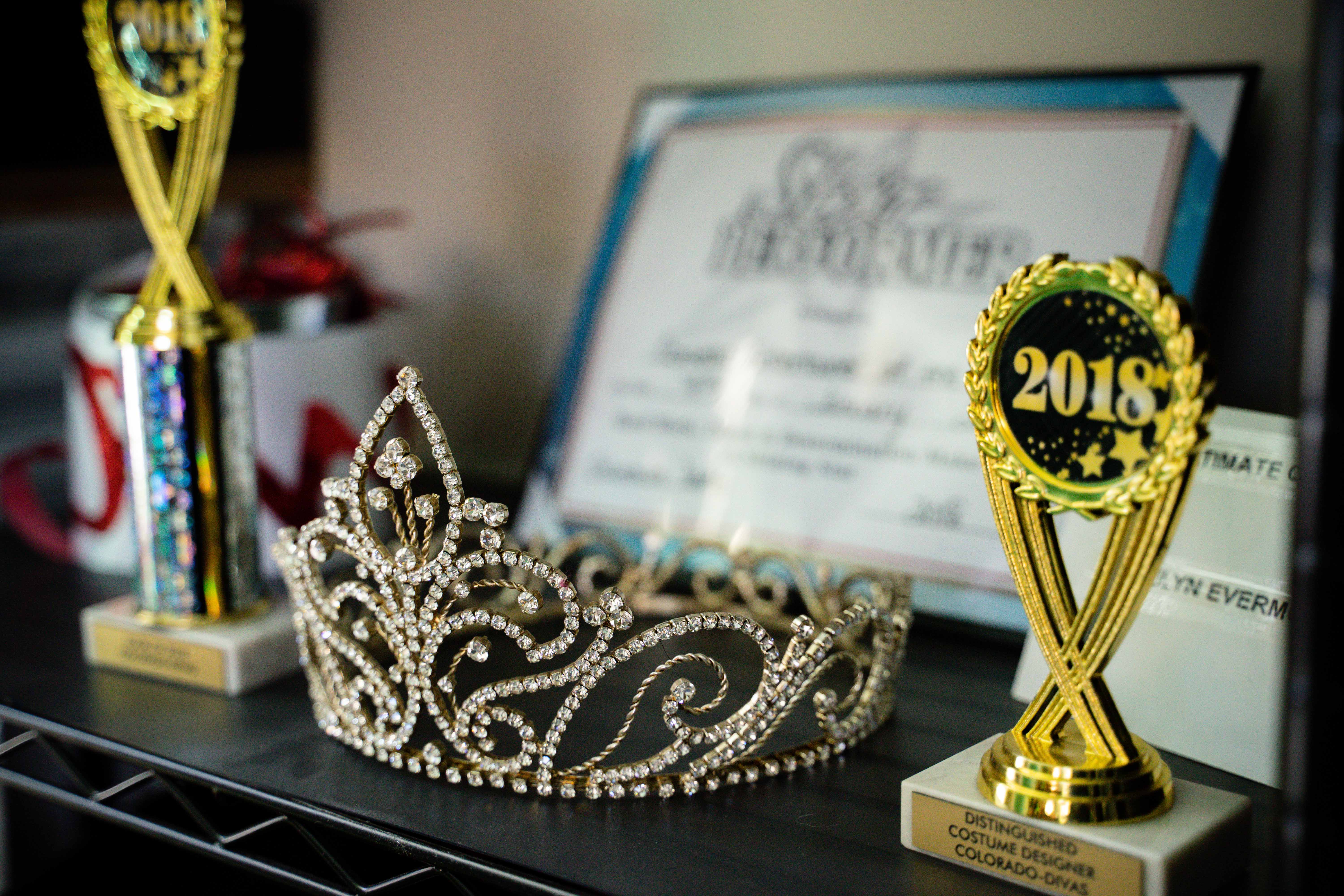 “Branding is very difficult in drag because you’re usually not performing your own music,” Evermoore said. “So you have to find ways to turn that Lady Gaga song into your own brand. For me, that’s always been adding in Youtube clips or just editing the song and adding more things to it. My Instagram stories are very well known in the community, and it’s just me kind of telling jokes. That’s really important to connect with my audience. Even though I haven’t seen these people in months, they’re still following my life. It’s really cool.”

Personal branding and expression of identity extend to and possible stem largely from the costumes. Evermoore makes all of their own costumes and even takes on commissions for other entertainers. In fact, they even made costumes for Denver drag queen Yvie Oddly while she was on RuPaul’s Drag Race and won during season 11 of the show. “She found out with not a lot of time to get ready for Drag Race, so it was like ‘we have to make 30 costumes today.’ It was really cool to see this gown I made a year ago on TV.” 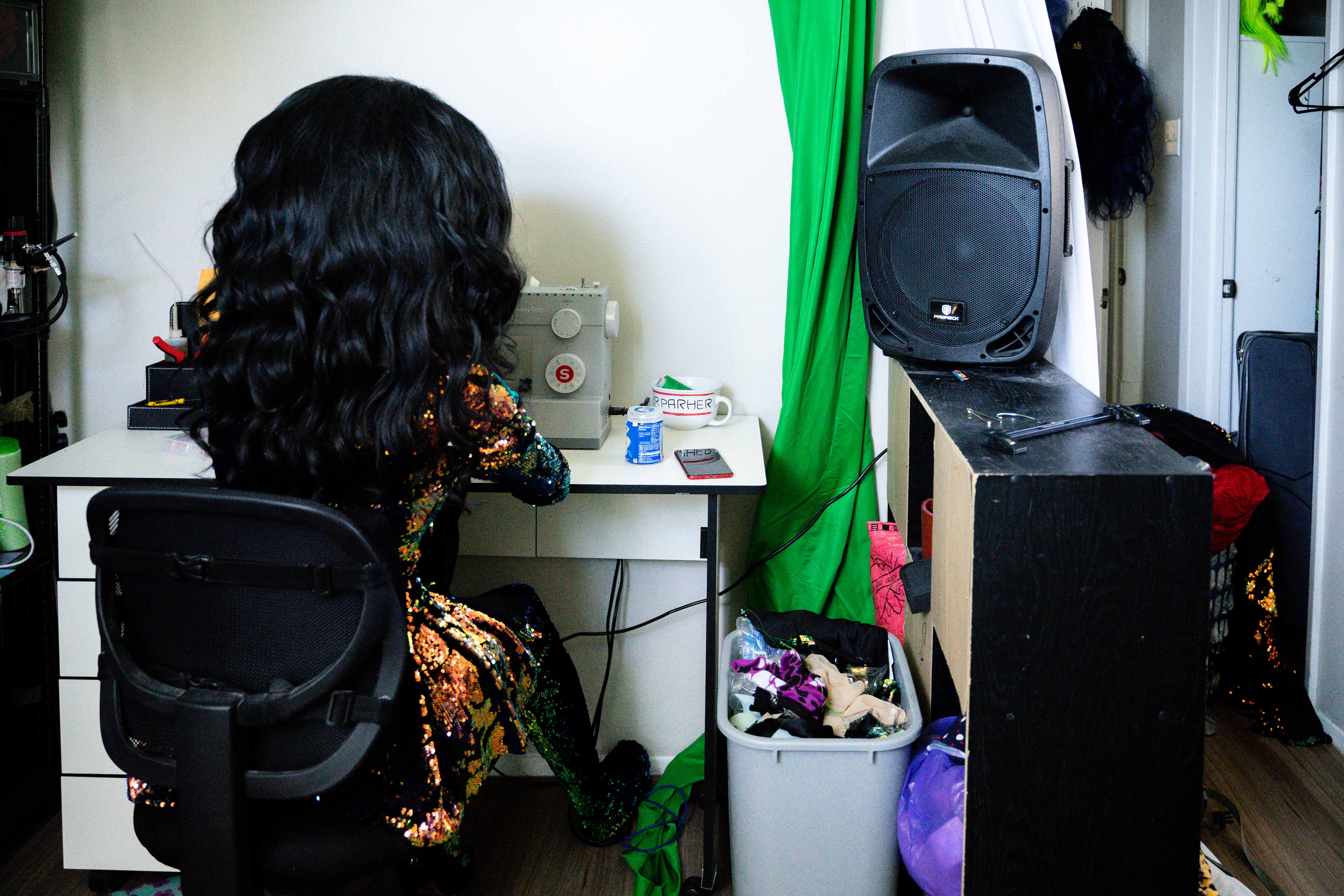 As far as making the costumes themselves? Evermoore has a pretty relatable method. “I watch a lot of fashion Instagrams, and I have a huge Pinterest board. I just kind of have ideas rotating through my head always. What’s on my mind? What do I want? I just go to Joann’s and make it and see what happens.”

Their hard work can most intimately be seen in the beautiful amalgamation that is their dressing room in their home. “The drag room is the space that I’ve worked so hard to get,” Evermoore said. “I never had my own space. Growing up, I had the living room as my room and I had a Harry Potter-sized closet for a little bit. To work so hard and to be a drag queen who can afford this apartment and this space, is a dream come true. “ 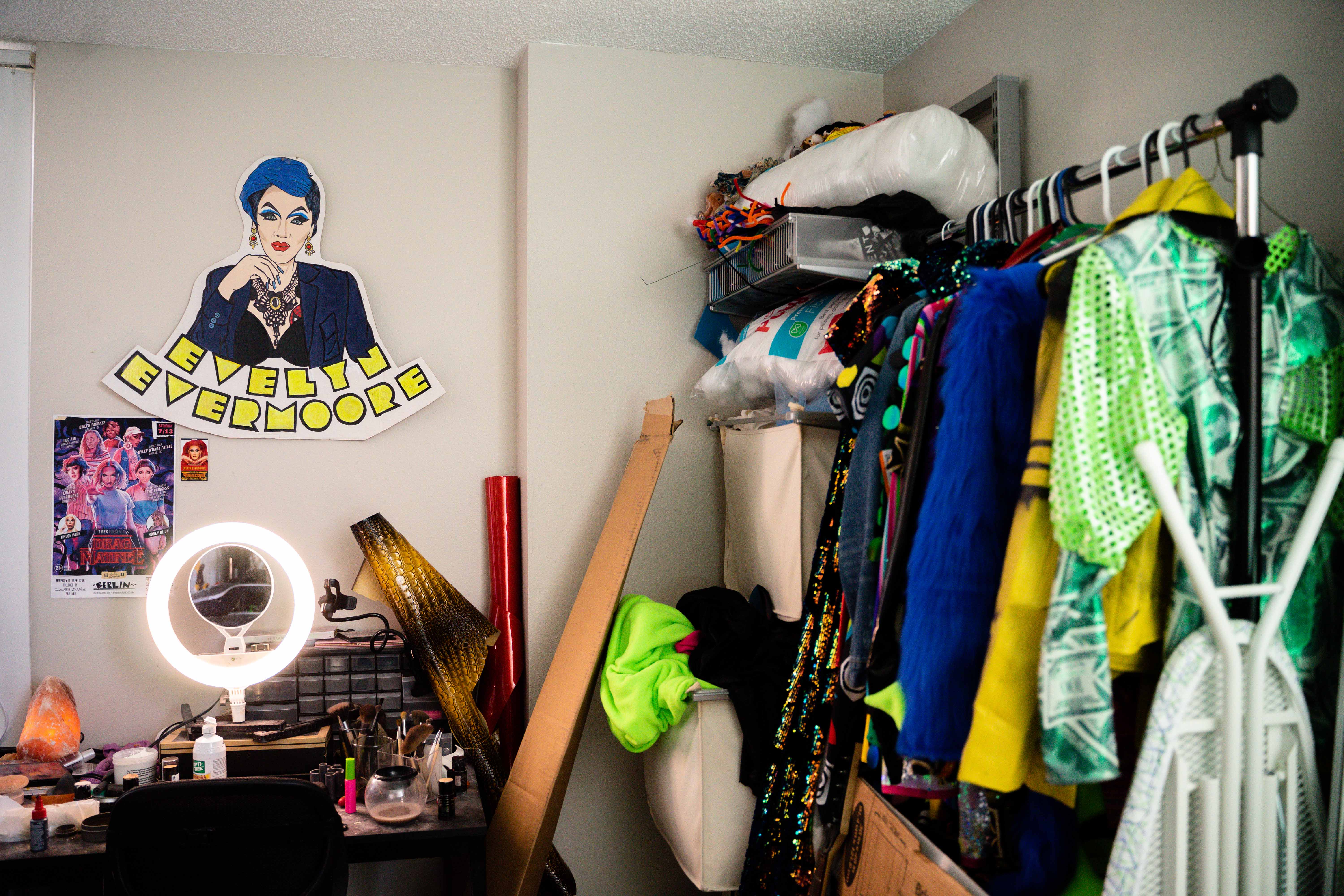 The possibility of becoming a full-time entertainer is just one of the many changes sweeping the drag community. Drag culture now holds a much more visible, mainstream presence than it did three and a half years ago when Evermoore began. “Drag was there, and it was very much a queer thing,” they said. “Drag Race was popular, but it wasn’t mainstream popular. When Drag Race moved to VH1 and became that mainstream breakout, that was right about the same time that the Denver scene had just an influx of anybody who wanted to do drag.” 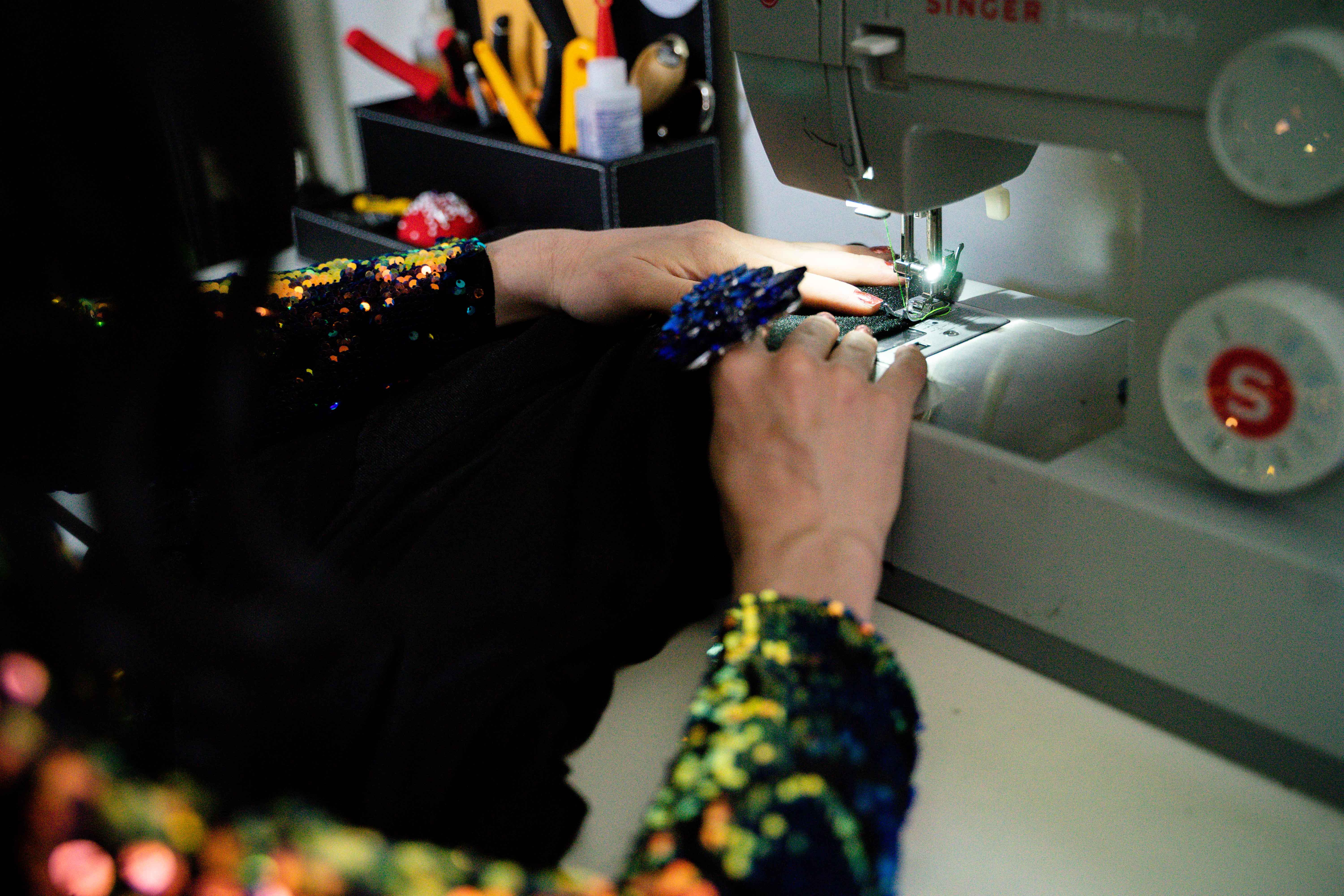 These changes have permeated the drag community in Denver and spread nationwide. “Within the actual community, there’s been a really cool trend of entertainers and people who aren’t just men in wigs performing in the scene,” Evermoore said. “It’s really cool to see drag as an expression of gender and as a way for people of all identities to come together and just perform the same weirdo art … Drag is for anybody and everybody. You don’t have to necessarily be queer to do drag.” 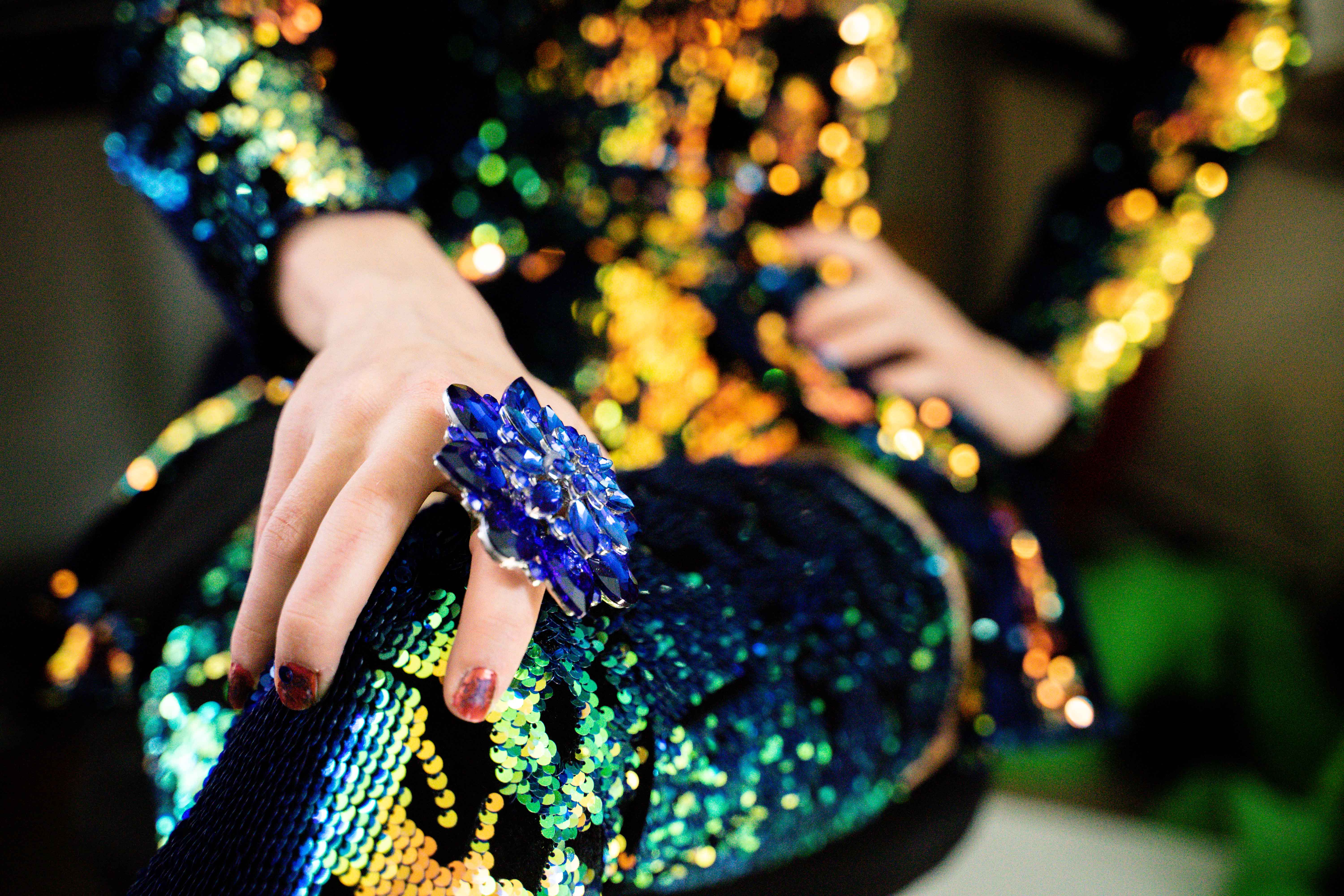 When asked how they would characterize Denver’s own drag scene, Evermoore stated that the community here was incredibly multifaceted. “The Den O’ Sin is this alternative drag house that is internationally known, and they are just so cool. We also have Betty Swallows who is a pageant entertainer. We have drag kings and queens and nonbinary entertainers. There are so many different styles of art. Denver is really just like a melting pot of some of the coolest drag I’ve ever seen.” 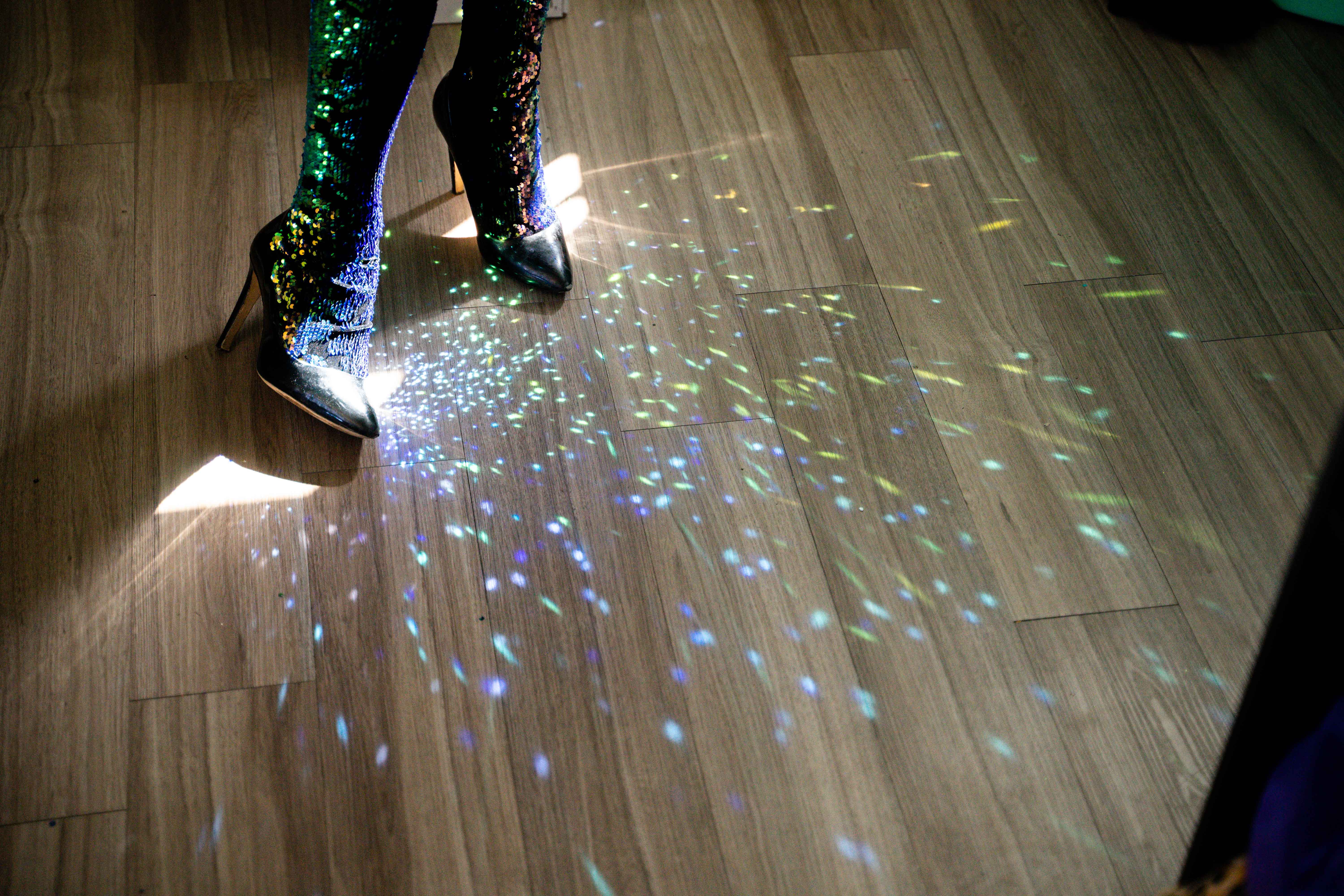 Evermoore is employing those entrepreneurial skills and shifting drag landscape as they are currently working on producing a show titled Stoopid. “It’s basically a stand-up improv comedy show, where we play improv games with the audience. We do a couple of performances, but it’s more about the jokes and the interactions than it is the typical lip-sync song and dance performances. Hosting shows has been something I’ve really started enjoying more than lip-sync performances recently,” they shared.

“All of my friends are now drag entertainers,” Evermoore said. “As a public figure, it’s hard to work in nightlife and work in this really marginalized career path and interact with people who aren’t either queer or always at drag shows with you.” 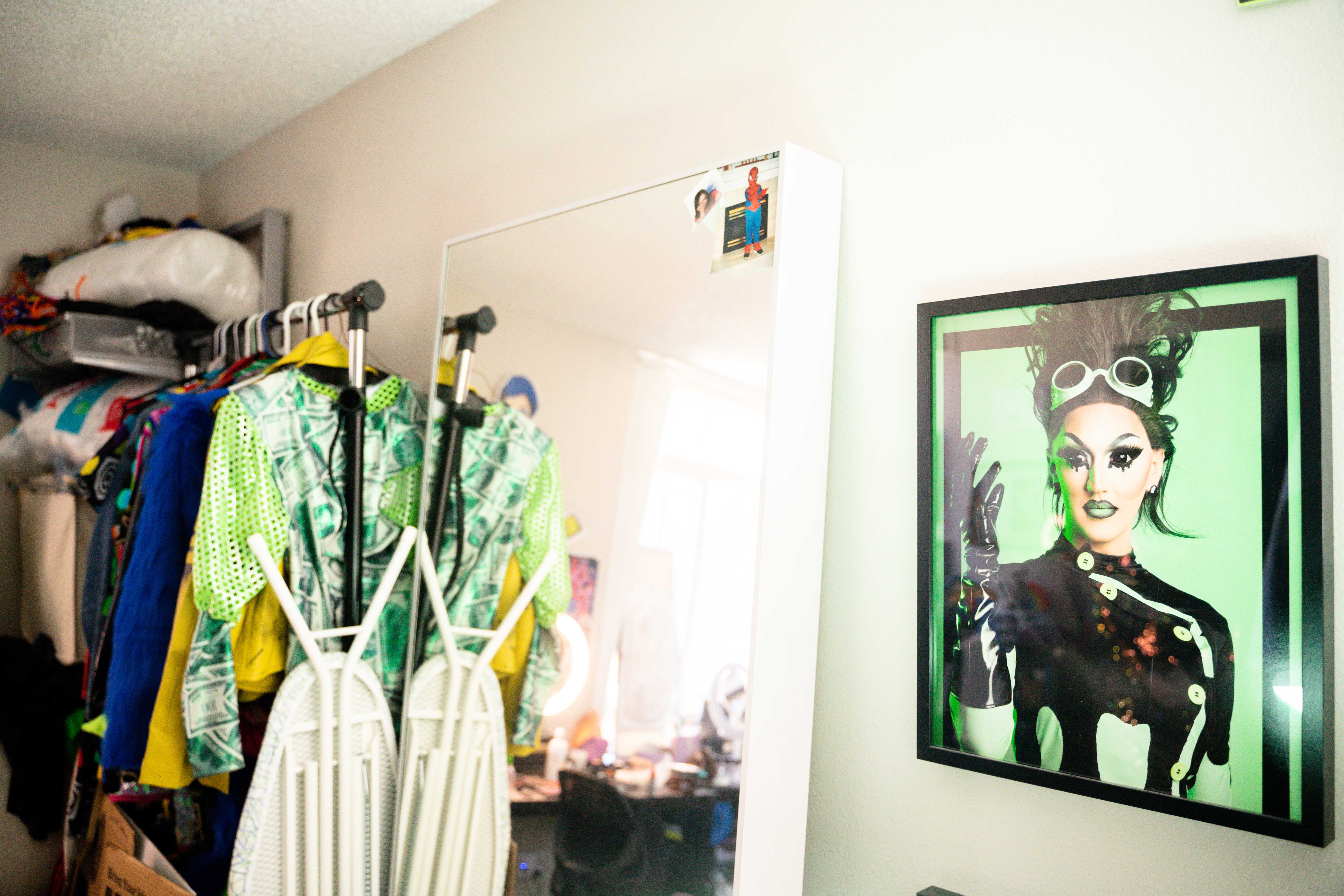 When asked if they had advice for anyone interested in pursuing drag, Evermoore only has championing words and encourages body-positive thinking. “If you’re thinking about trying drag, my best advice is to just do it. You’re going to look ugly for the first 10 times you do it, and that’s okay. You have to be ugly for a little while to be able to own how good you look later. If you’re thinking about doing it, do it because it’s the best thing I’ve ever done for myself.”

An already successful entertainer, Evermoore has set a new goal for themselves in the coming years. “I’ve been a sober entertainer on and off for about a year,” they said. “I think sobriety is something that the queer community needs, and that’s my big push.”

One thing’s for certain, Denver is bound to see a lot more from Evermoore in the coming years. 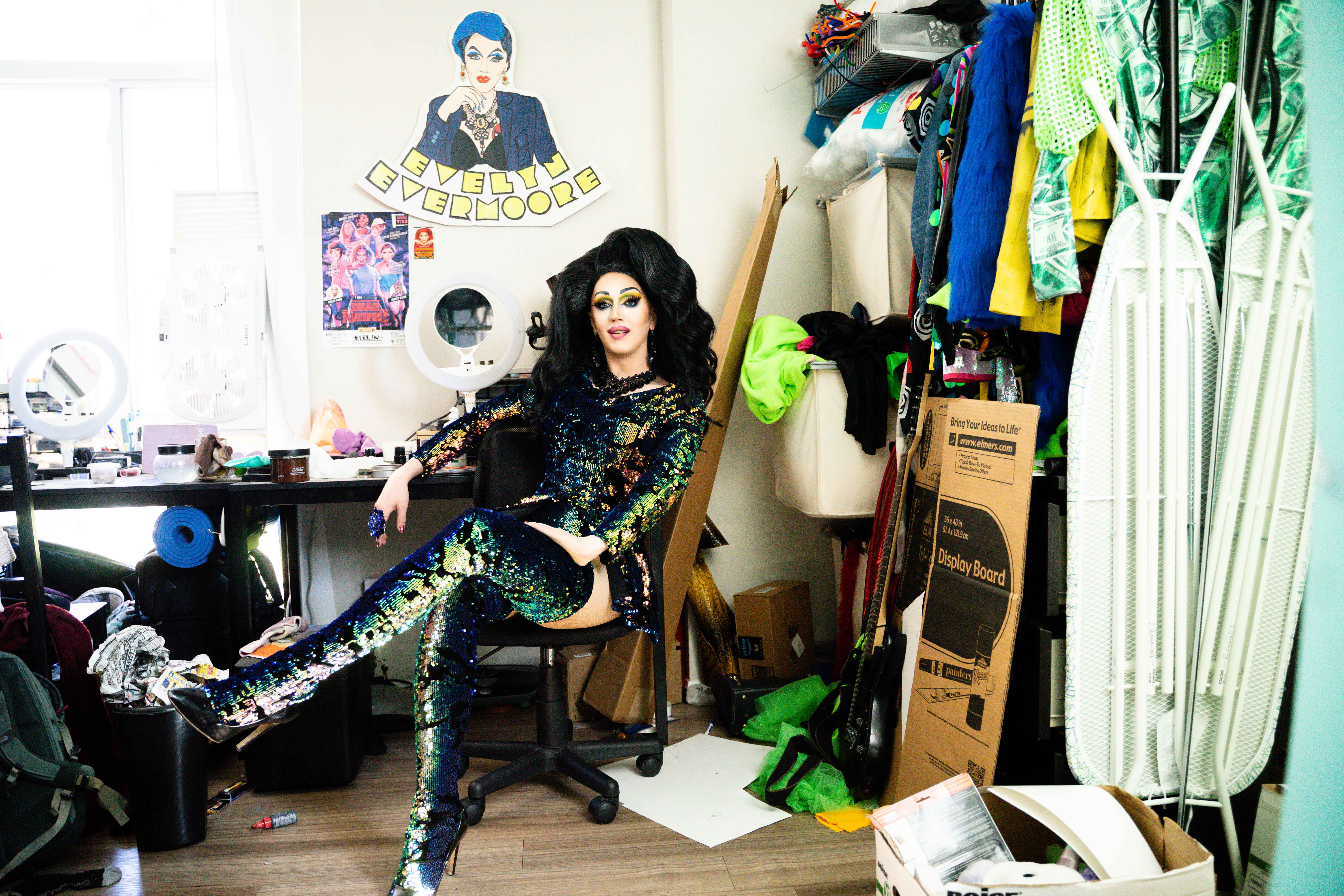