All photos by Brandon Johnson

On the night of November 18, seven hip-hop artists and two national headlining tours converged on the Mission Ballroom’s single stage. Denver’s rap fans were blessed with a double feature — for the purchase of a single ticket, they got to experience Ski Mask The Slump God’s “Stokeley Tour” (featuring DJ Scheme, Danny Towers and Pouya) and A$AP Ferg’s “Yedi Tour” (with Murda Beatz and MadeinTYO) as a singular, integrated show. Ferg and The Slump God’s separate tours coincided only for this date.

The show’s unique conglomerated nature wasn’t obvious. None of the artists explicitly commented on the phenomenon of two tours occurring at the same place and time — neither during their performances nor on social media. Still, the night didn’t feel disorganized or disconnected — rather, it felt the opposite. It was remarkably seamless. For instance, despite having to set up and break down the staging and production of five different openers, the show consistently ran twenty minutes ahead of schedule. A$AP Ferg’s supporting acts also performed in between sets from the “Stokeley Tour” openers, and this interweaved set structure fostered a sense of thought-through cohesion. 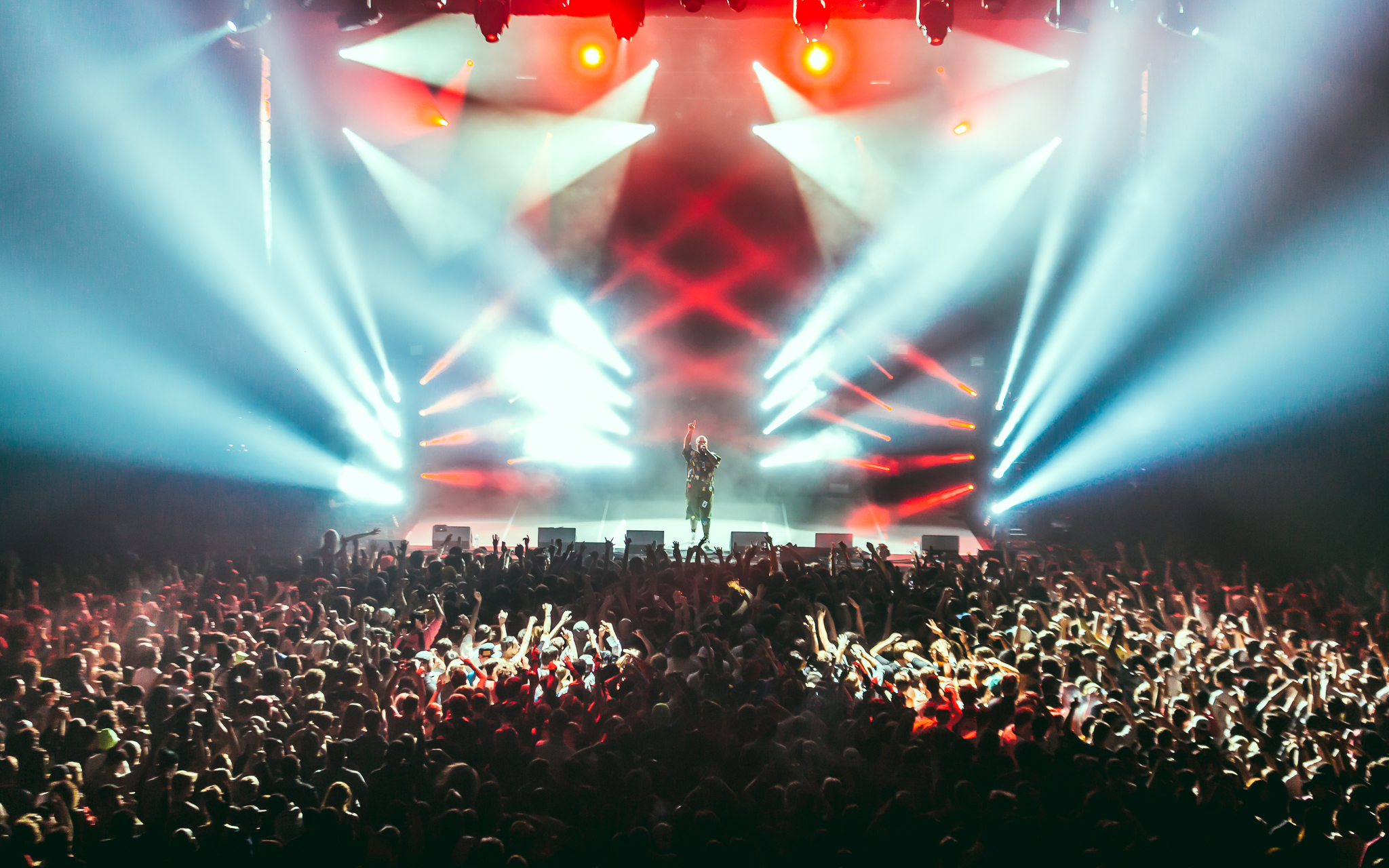 Though the two headlining acts never performed together — opting out of the opportunity to enact their collaborative Missy Elliot-inspired single, “ILoveYourAunt” — both of them brought out their supporting acts during their sets to perform a few select tracks. DJ Scheme and Danny Towers returned to the stage with The Slump God to perform their collaborative track, “How Do You Feel?” Likewise, MadeinTYO and A$AP Ferg joined forces to present “Wam” — on which the latter features the former — and “Ned Flanders,” on which the former features the latter. In this manner, the joint concert demonstrated that the headlining rappers are united in their ability to surround themselves with and beget talent.

After a fiery performance by the evening’s final opener, Pouya — a controversial rapper who literally smashed (not dropped) his mic into the pit at the end of “1000 Rounds” — Stokeley Clevon Goulbourne bounded onstage. After ripping through “LA LA” and “BabyWipe,” he gave himself a proper introduction — “I am Ski Mask, the motherfucking Slump God.” Clips of Jason from Friday the 13th Part III then projected onto Mission Ballroom’s giant screen behind him as he put on Jason’s trademark hockey goalie mask to perform “Unbothered.” Like most of his live renditions that night, the Slump God didn’t rap the whole of his songs, preferring to ride the choruses out with the audience. He made up for this passivity by delivering the intros and outros a cappella, which was especially effective for “Catch Me Outside” and “Nuketown.” 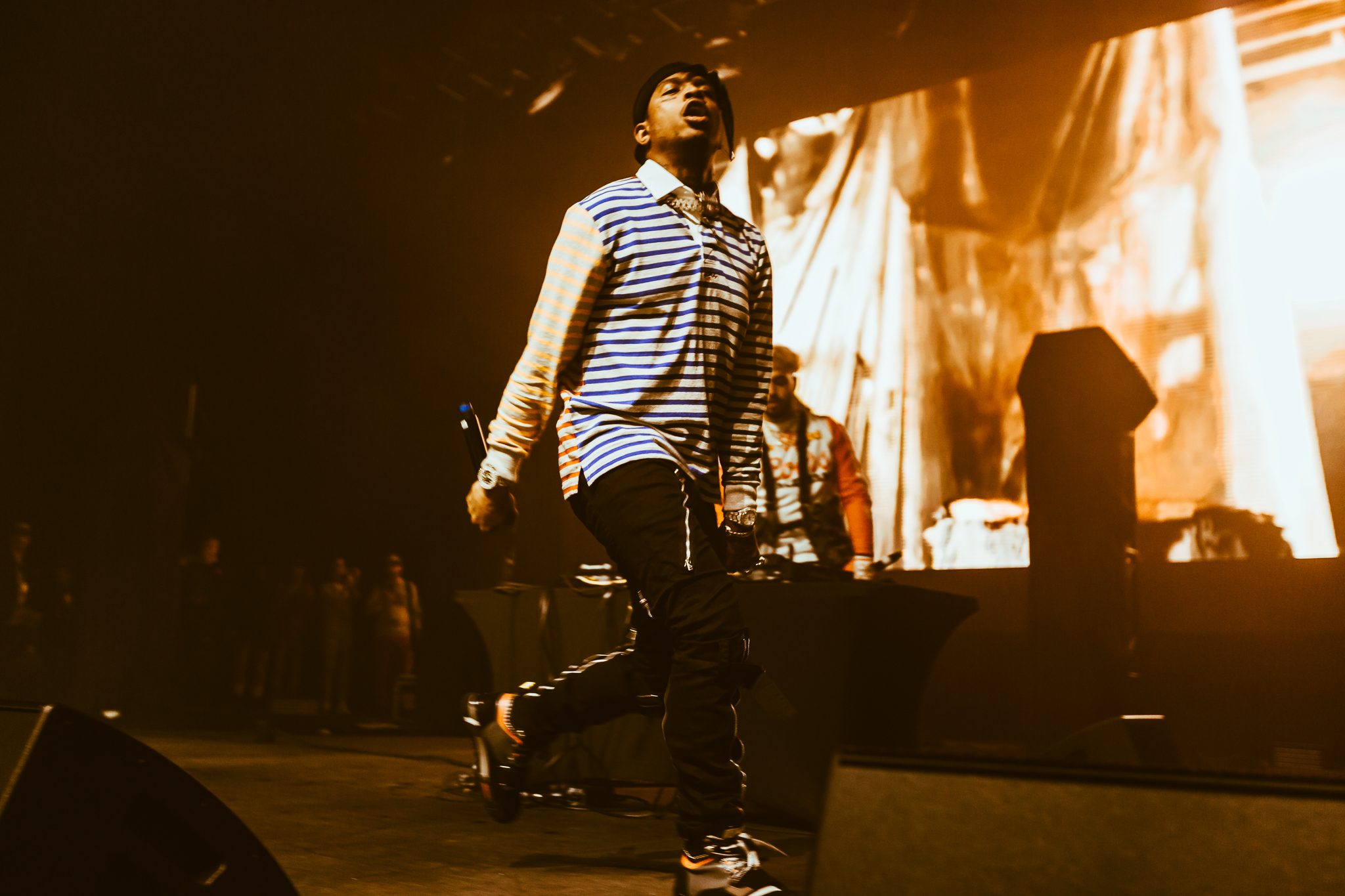 Goulbourne ended his act with a mini set in tribute to XXXTentacion, a rapper with whom the Slump God often collaborated before he was shot to death in June of last year. The sequence began with the headlining rapper’s recapitulation of XXXTentacion’s “RIP Roach.” Displayed above the swarming mosh pit was footage of the character Joan from the slasher film, Seed of Chucky, as she burns alive. The Slump God then channeled this intensity in an entirely different way for his raw rendition of the late rapper’s “Jocelyn Flores.” The silence between verses was just as impressive and emotionally charged as the chaos of the song before. 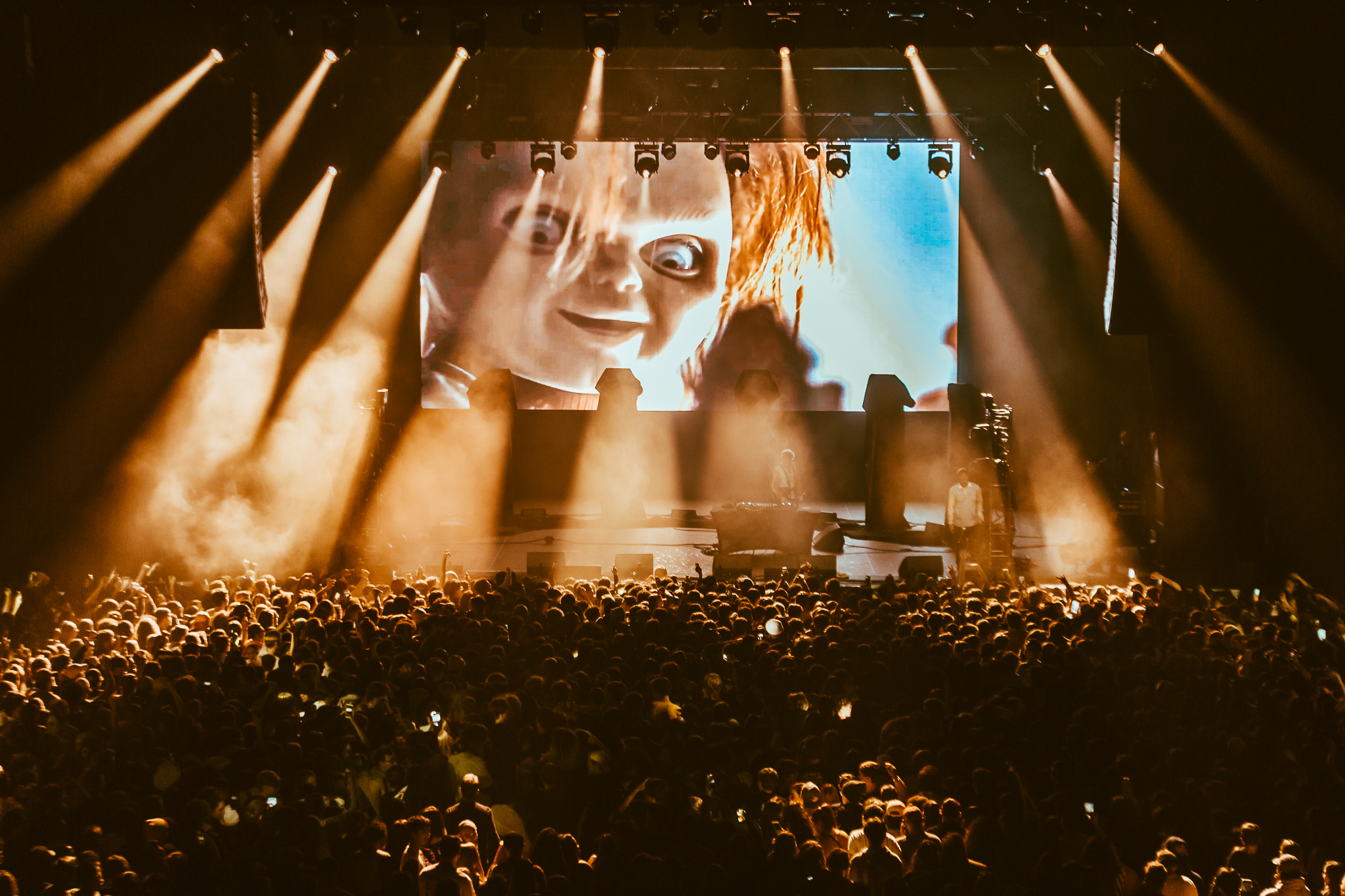 Overall, Ski Mask The Slump God’s set was urgent and intense. With only one studio album under his belt, his stage presence was hungrier and darker than that of A$AP Ferg’s. The younger rapper performed like he’s got something to prove.

A$AP Ferg, on the other hand, acted as if he’s already proved his worthiness and impact on the industry, and his performance in Denver confirmed that he wasn’t merely faking it to make it. His aesthetic taste — informed by his fine arts education — was a perfect fit for the Mission Ballroom. It has the atmosphere and production capabilities desired by multimedia artists like him, for whom style is just as important as substance. The visually dazzling light displays — which at times made the stage look like a boxing ring — were one of many details that revealed the Harlem rapper’s flair for showmanship. He also directly addressed the audience after every single song (often giving instructions for when to mosh and what dance moves to do) in an ultimately successful effort to engage and connect with the audience. 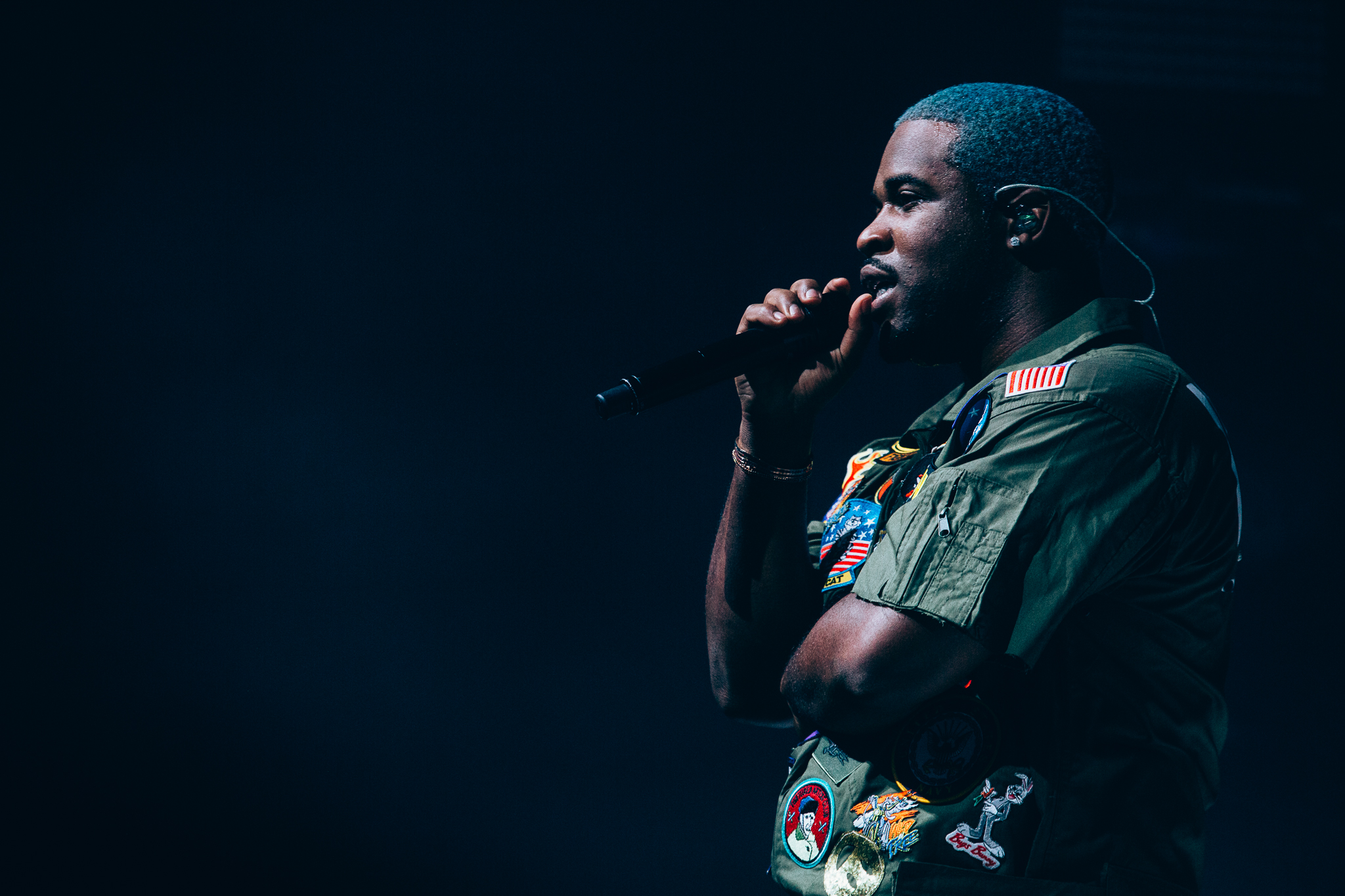 Ferg’s skill at — and obvious delight in — entertaining isn’t all that surprising in light of his newest EP, Floor Seats. It dropped on August 16, 2019, uncoincidentally the same day he announced this “Yedi Tour.” He opened his set with the song that shares the EP’s name, whose lyrics described the surrounding events in real-time — “We all grinded for the floor seats, Now all of the pretty girls, they know me, I’m on a jumbotron, you can’t ignore me.” He also clearly catered his finale to fit the live entertainment experience. Following his performance of his 2017 single, “East Coast” — which contains the line, “jump in the bit and start moshing the shit” — were cinematically-produced hits like “Next Level.” Kanye West’s choir performed this song at Joel Osteen’s church in Houston on Sunday, which gives an idea of how easily this song lends itself to concert performance.

The founding member of the A$AP Mob ended his performance with “Plain Jane” — all the more fitting since the Recording Industry Association of America certified it four times platinum earlier that day. For whatever reason, the stars aligned for Mission Ballroom show on November 18, and who can blame us if we’re still a little struck by it all.

All photos by Brandon Johnson.