Review – Lewis Capaldi Brought Heartbreak and Laughter to the Ogden

Lewis Capaldi’s stop at the Ogden Theatre on Tuesday night was intended less for fans to get the opportunity to see him live and more for Capaldi to spend an hour and a half campaigning for his next accomplishment. “I, Lewis Capaldi,” he boldly announced, “Am going to be America’s next sweetheart.” 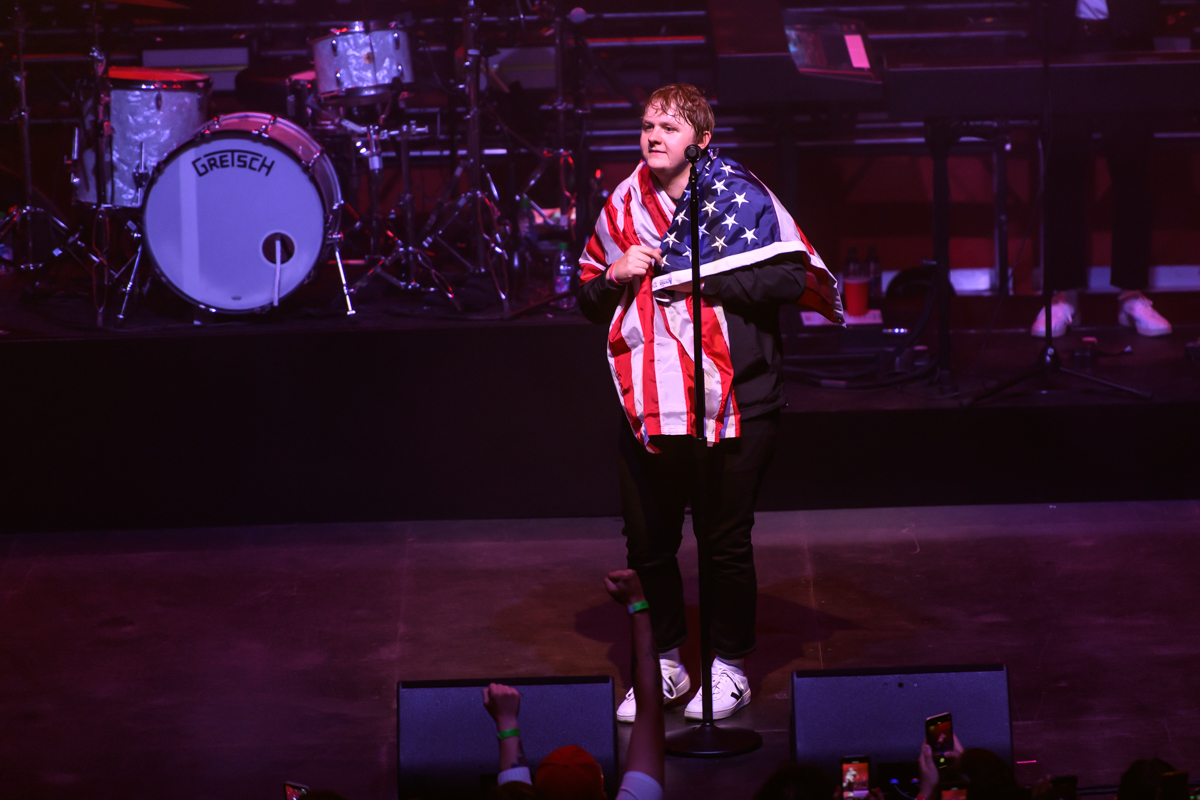 He’s well on his way to being crowned that title. Though the night was cold and wet, it was obvious that the people waiting close to the door, huddled together to keep warm, had been there for quite a few hours. Although the Jonas Brothers were competing for Denver’s attention, making their comeback stop just across town at the Pepsi Center on the same night, Capaldi still sold out the Ogden. And with the way things are going, he’ll probably be selling out the Pepsi Center himself the next time he swings by Denver.

The night began with Saint PHNX, an alternative rock band led by brothers Stevie and Al Jukes from Glasgow, Scotland, just down the road from Capaldi’s hometown. The three-piece band brought a lot of energy with them to get the crowd warmed up and though it seemed like many were surprised to see an opening band, they played along, warming up to them almost instantly. The band has already begun to make a name for themselves, drawing comparisons to Twenty One Pilots and Imagine Dragons – even getting the opportunity to open for the latter at their shows in London. At the end of their set, the band divided the room in half, each brother taking a side and pitting the crowd against each other. While Stevie took the exercise seriously, Al had his fun with it, instructing the entire left half of the room to yell, “F*ck you, Steve!” at his brother. 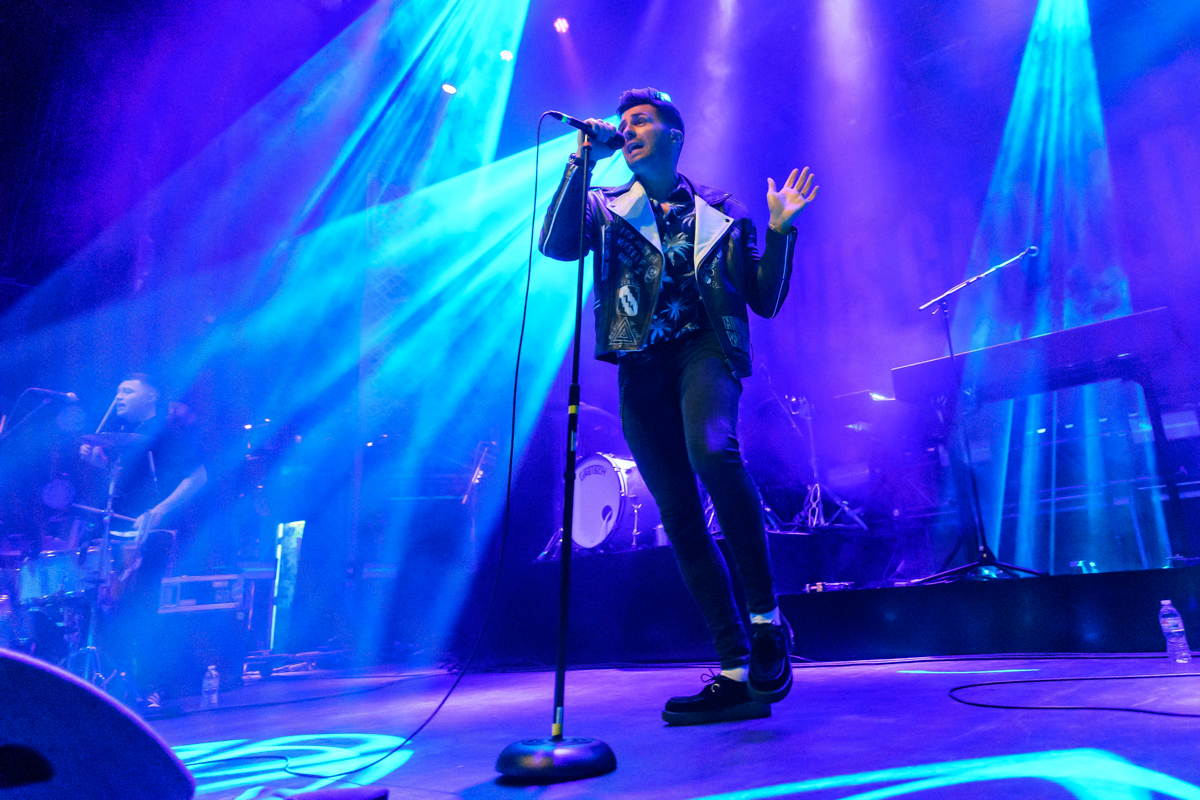 After a half-hour set from Saint PHNX, Capaldi was ready to take the stage. The 22-year old Scottish singer-songwriter has had a heck of a year. In April, Capaldi sold out an eight-date UK arena tour scheduled for 2020 in 10 minutes. And if you can believe it, that happened before he released his debut album, Divinely Uninspired To A Hellish Extent. His hit single, “Someone You Loved,” has now been sitting on Billboard’s Top 100 for 19 weeks. Despite acquiring a fast-rising level of fame this year and writing almost exclusively heart-wrenching lyrics, Capaldi doesn’t take himself too seriously. He still lives in his parents’ house – explaining that he prefers to spend all of his money on food – and spends some of his free time playfully feuding with Oasis legend Noel Gallagher.

He brought all of that lighthearted energy to the Ogden on Tuesday. The first time we hear him, he’s offstage, welcoming the audience to his show over the sound system to Spandau Ballet’s “True.” He and his band entered the stage to dramatic cinematic music before he launched straight into “Grace.” A banner behind the musicians emblazoned with Capaldi’s name in bold, red capital letters provided a basic backdrop for the show. Capaldi and his band were all dressed in black, and for those who questioned the simplicity of the effects on stage, it quickly became clear that Capaldi needs no bells and whistles to sell himself. 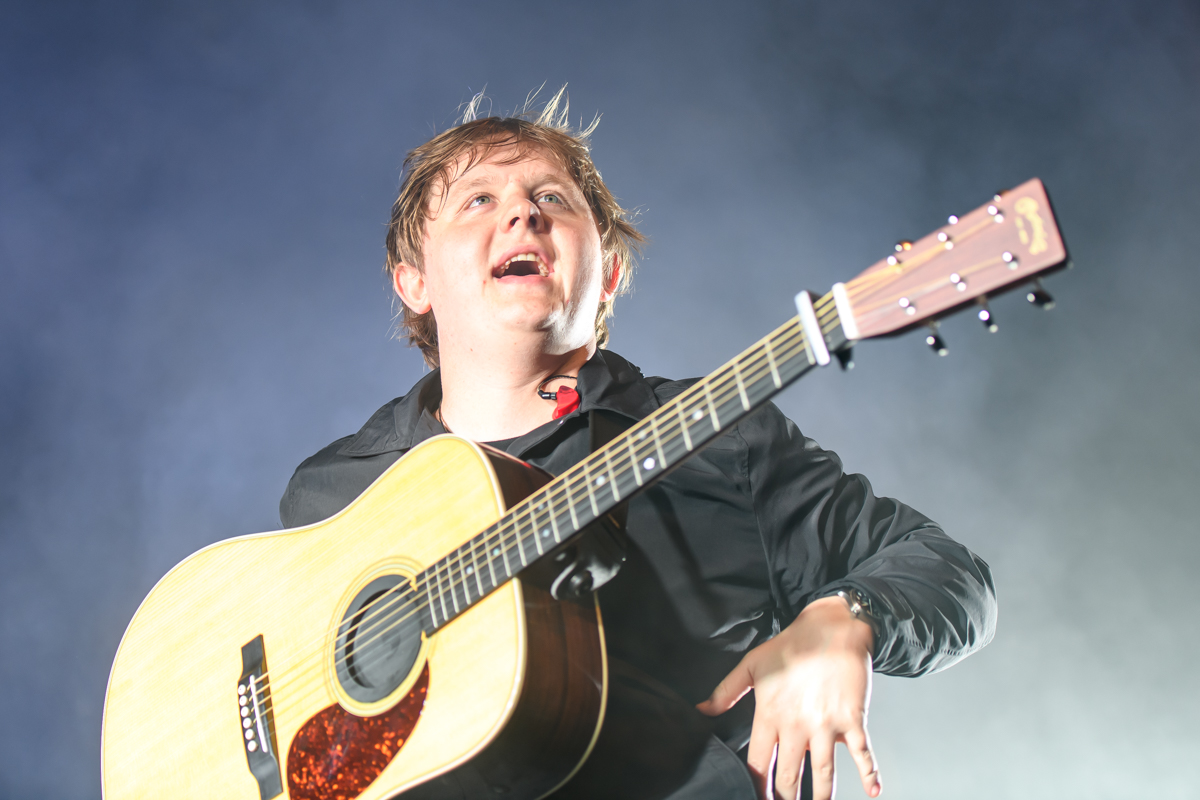 Capaldi’s talent is something that only comes along every once in a while and that anyone would be lucky to witness in person. His signature raspy voice is incredibly powerful and the range he has is something any musician would envy. The band stayed in the background throughout the entirety of the show and let Capaldi take the complete, adoring attention of the room. He demonstrated his vocal prowess with ease during soulful songs like “Bruises” and “Don’t Get Me Wrong.” 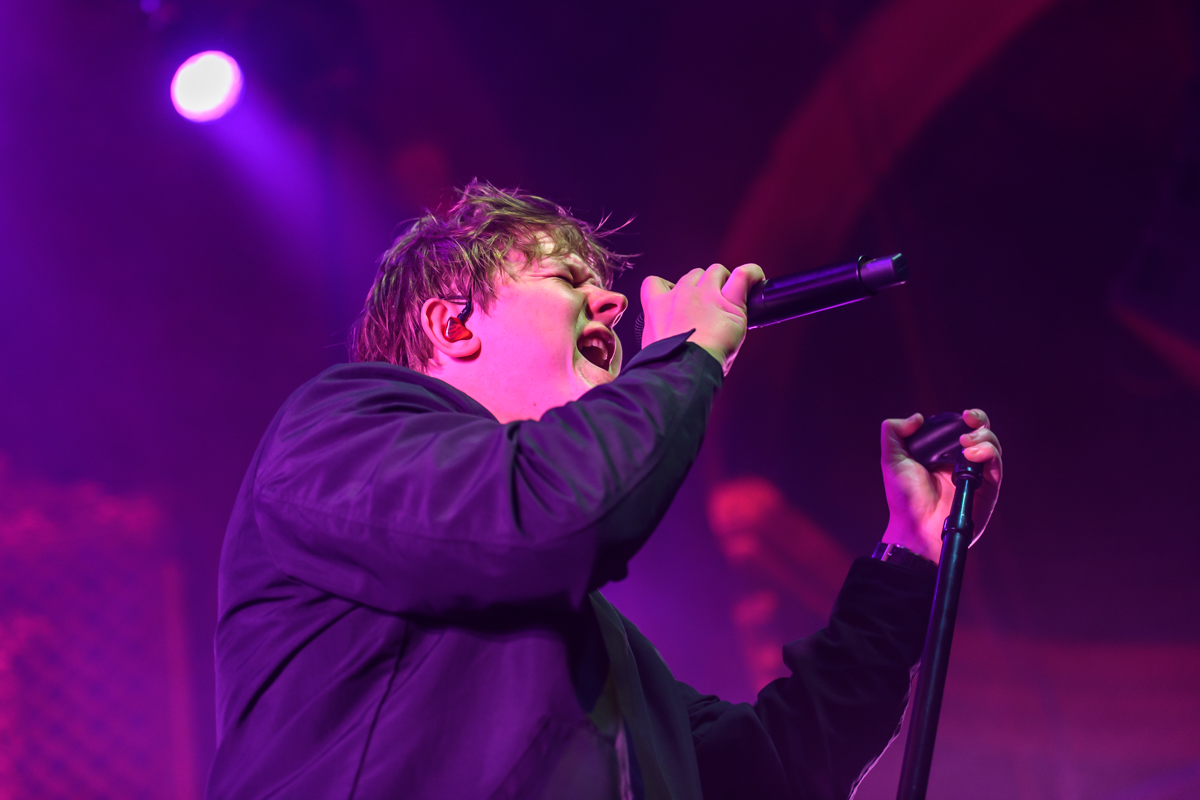 His capacity to write “big, sexy sad-bangers” that touch the hearts of all of his listeners – sometimes to the point of cathartic tears – is unparalleled. He even inspired an engagement during the halfway point of the show last night between a couple he dubbed as “Paggie” – a mixture of the couple’s names, Patrick and Maggie. “What song did you get engaged to?” Capaldi asked. Upon hearing that it was his song “Maybe,” a song inspired by people’s self-destructive tendencies, Capaldi demonstrated bewilderment, saying “What happened there?” He warned the couple, “The next 40 minutes are all songs about breakups,” before going on to dedicate “Lost On You” to the couple. He took a pause right before the end of the song to joke, “I’m starting to think this is a terrible song to dedicate to engaged people.”

Capaldi spent nearly as much time talking, swearing and joking around with the crowd as he did singing. After “Forever,” Capaldi stopped to share his appreciation for the crowd selling out his first show in Denver. He joked, “I look out and see all your happy faces, smiling, and all I can think is $20 a f*cking ticket!” At one point, the parents of a 6-year old boy named Atticus held him above the crowd with a piece of wrinkled paper asking Capaldi to draw a self-portrait for him. Capaldi cheerily obliged, narrating as he draws, “I’m drawing him as six-foot-two but I’m only five-foot-ten.” 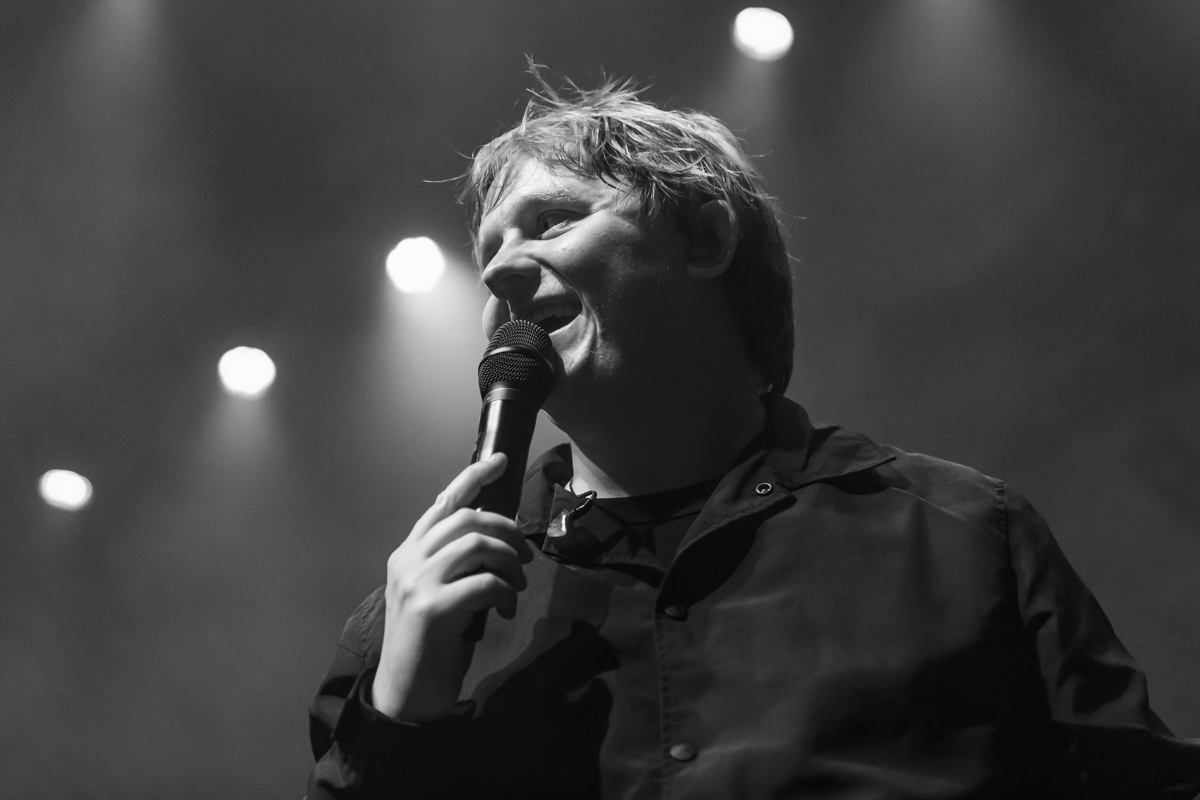 Upon finding out that the Jonas Brothers were also in town, he thanked the crowd for coming to see him instead, extending a special thank you to “Paggie” for “getting engaged to me over the Jonas Brothers.” Despite his gratitude, it felt unnecessary, as everyone in the room made it seem like an easy choice, clearly huge fans of Capaldi. The crowd met every song with excitement, people singing every single word alongside Capaldi, helping him out when he seemed to forget lyrics. When he closed with “Someone You Loved,” emotion in the room ran high. If all of his tour stops are as successful as Denver’s, Capaldi won’t need to campaign for the title of “America’s sweetheart” much longer. He’s easy to love, fun to watch and with a talent like his, he can only go up from here.