Review – Bastille Writes the Soundtrack for the Apocalypse

Bastille makes music for the nights where you just want to dance and have a good time. But as a warning, only listen if you need to simultaneously be reminded of the overpowering sense of dread most of the population has related to climate change, politics and the negative effects of the increasingly digital world we live in. The overwhelmingly young crowd who came out to see the English band in Denver on Friday night seemed to be looking for that kind of a party as they made their way onto the floor and filled the risers in the back of the Mission Ballroom for their “Doom Days (Part 1) Tour.”

The indie rock band Joywave started off the night, entering the stage dressed in matching traffic-vest-like neon yellow outfits and backlit by their name sprawling across a giant LED screen. They began their set with their lethargic, “anti-chaos” single “Like A Kennedy,” an interesting choice in vying to gain the crowd’s enthusiasm. The band treated the crowd to new songs off their upcoming album and had the audience feeling considerably more comfortable with them after they played their well-known hits, “Tongues” and “It’s A Trip!” towards the end of their time on stage.  Interspersed between songs, frontman Daniel Armbruster addressed the room as “future Joywave fans,” and cracked jokes about the elevation and drummer Paul Brenner attempting to join Denver’s International Church of Cannabis. 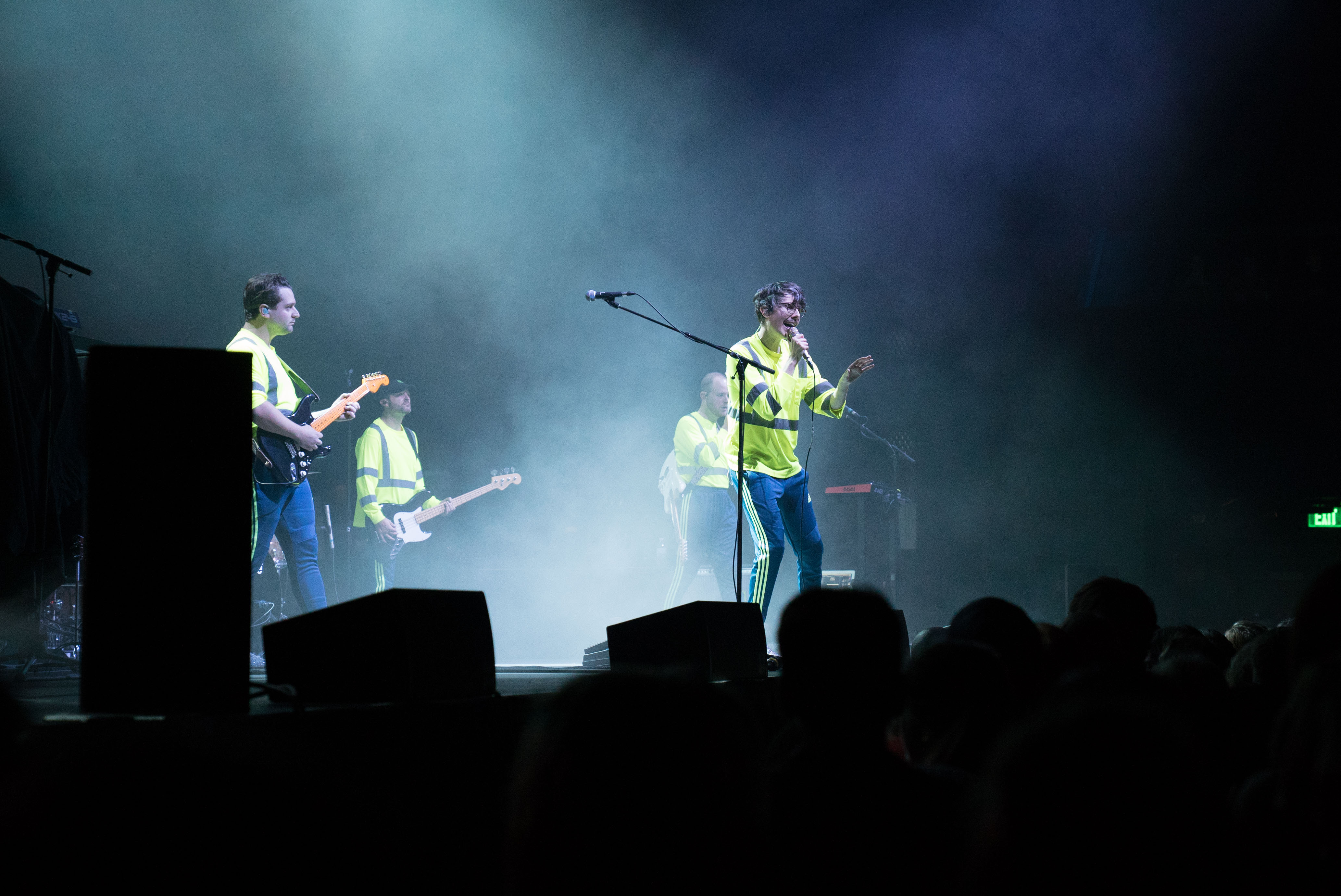 After Joywave left the stage, the room was abuzz. A feeling of anticipation filled the floor as Bastille fans prepared for the main event. Conversations revolved around guessing the setlist for the show, most people clearly wondering how the band would navigate their extensive discography and what parts of their musical career they would highlight.

The last time Bastille visited Denver was at Red Rocks in October 2016 on their “Wild Wild World Tour.” It was arguably one of the most chaotic years in politics and the media industry. Bastille did not shy away from reflecting the world’s feelings of confusion, hopelessness and loss in Wild World, and as time continued on past the album’s release, it only became more and more relatable. Returning this year with Doom Days, the band continued to explore similar themes, but this time through the pursuit of escape from these feelings and the world’s problems. 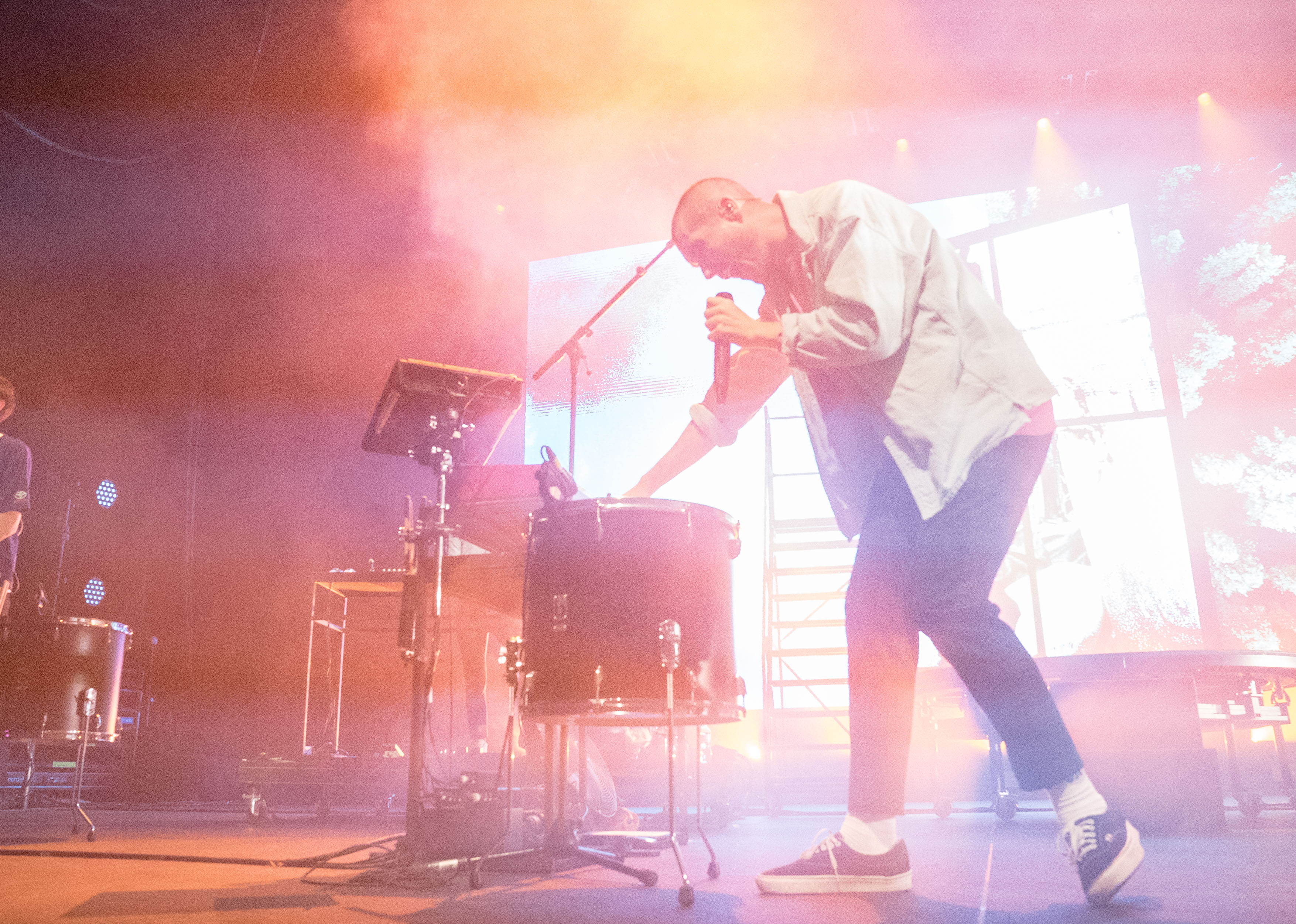 As soon as the lights in the venue went dark, the crowd cheered as the screen displayed a digital clock and a window, the curtains pulled back to reveal a bustling cityscape. The lights came up once again to reveal frontman Dan Smith sitting in front of a retro TV set atop a platform, singing the opening hit to their Doom Days album, “Quarter Past Midnight.” Keyboardist Kyle Simmons wore a Nolan Arenado jersey, a nice nod to the audience they were playing to. The crowd immediately began singing every word and Smith, confident of the crowd’s extensive knowledge of their lyrics, frequently held the microphone out to the room, letting them take over the performance for a few lines. 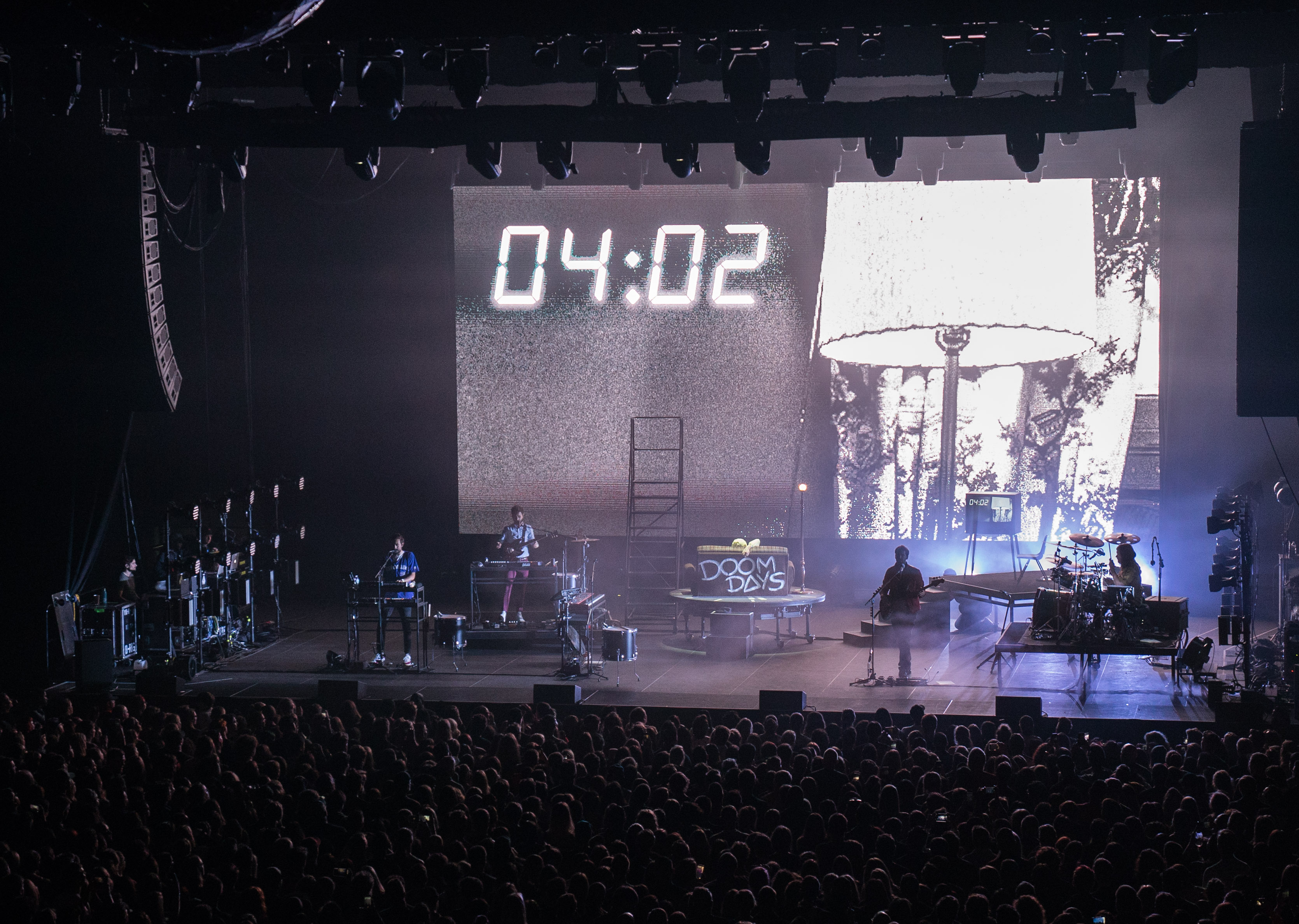 The night was broken into three acts, signaled on the screen with large text and each named after song lyrics from Doom Days. Bastille leans heavily into apocalyptic imagery, the screen lit up with atomic mushroom clouds during “Send Them Off!” and ticking clocks that encouraged a feeling of impending doom during “Things We Lost in the Fire.” As the night went on, the cityscape in the window from the beginning of the show slowly became more and more devastated with glowing radioactive particles floating in the air.

Smith took the time to explain the inspirations and feelings behind their music in-between songs, while also playfully joking about the effects of Colorado’s altitude. However, during songs, the altitude didn’t seem to faze him, as he bounded around the stage and jumped up and down atop the platforms set up on stage. Microphone feed issues plagued Smith throughout the night, only made apparent when he consistently gestured to the sound engineers throughout every song to adjust the volume, visibly frustrated at times. Despite this, Smith’s clear priority was making sure the audience enjoyed themselves. He left the stage to get up close and personal with the audience during “Flaws” and – as is tradition for their Eurodance mash-up “Of the Night” – encouraged the crowd to let loose, leading by example. 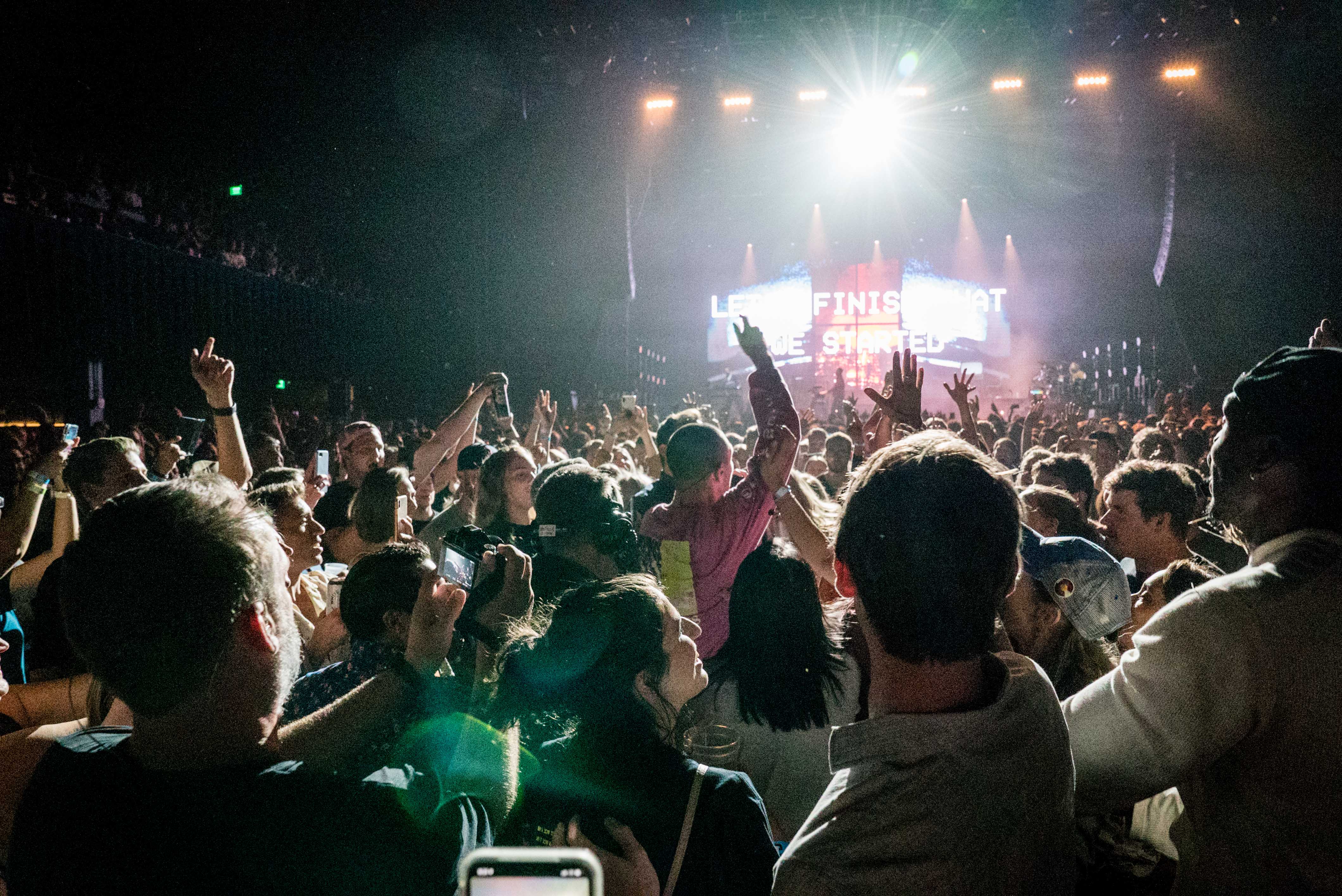 Though Dan Smith is an energetic force to be reckoned with, Bastille is more than just their frontman. The crowd is clearly a fan of the group as a whole, loud cheers proving this when each member of the band took their own time to address the crowd. Between songs, each band member provided some commentary about the songs and behind-the-scenes tidbits, as well as encouraging crowd interaction. Guitarist Will Farquarson introduced “Bad Mistakes” by telling the audience about Smith’s opposition towards being shaved bald for the music video. 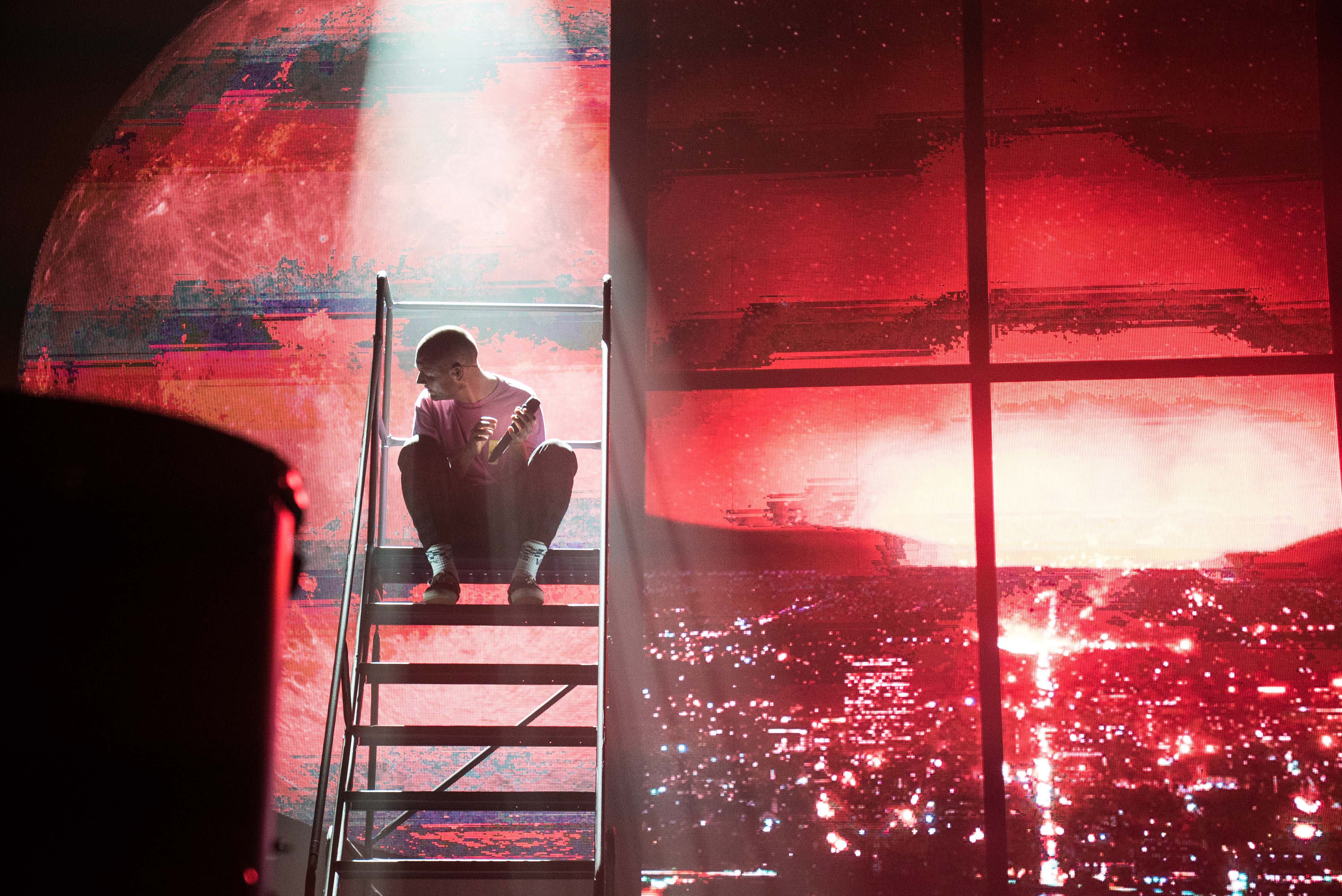 Bastille consistently delivers a solid show and this one was no different. The setlist – a mixture of Doom Days, Wild World, and their debut album Bad Blood – demonstrated that pursuing escape is impossible without acknowledging the things you’re running away from. Despite the adequately depressing themes that are the essence of Bastille’s music, they deliver them in such a way that their audience doesn’t seem to mind confronting the parts of life that worry us most, so long as we can dance along to all of them.