All Photos Courtesy of Amigo the Devil on Facebook

With the streets of Denver littered with fallen leaves, Autumn is clearly in full swing – at least as much as it can be in Denver. With the weather finally settling into the crisp chill of the season, Halloween fanatics can truly enjoy their time snuggled under blankets, sipping hot cider and binging horror movies. Sadly for those who truly love Halloween, the spooky holiday is still a ways away. But that doesn’t mean you can’t find a dose of all things scary before the occasion fully rises from the grave. Singer-songwriter Amigo the Devil brought Halloween to Denver a little early this year when he made an appearance at the Marquis on Thursday night. 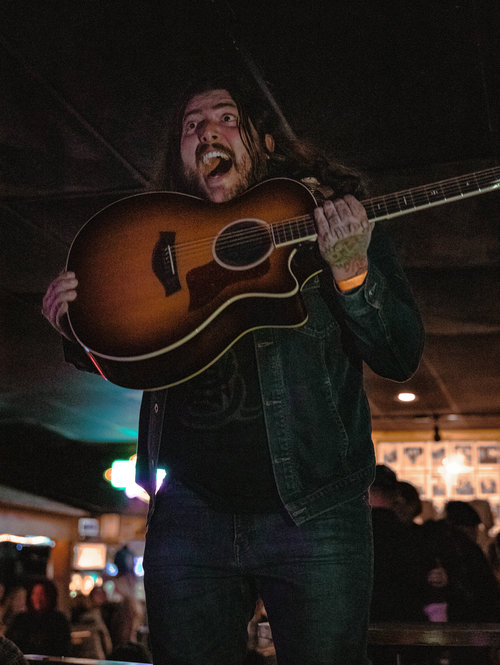 Since releasing his debut album last year, Amigo the Devil has amassed a cult-like following. Danny Kiranos, the man behind the stage name, has made a name for his alter-ego with his sinister lyrics and surprisingly upbeat melodies. Lyrically telling stories about iconic serial killers such as Jeffrey Dahmer and Ed Kemper, Amigo the Devil’s true message is one of self-acceptance. Amigo the Devil brought his own personal brand of madness to the Marquis as part of his current tour – and what ensued was devilishly good fun.

California-based band Twin Temple kicked off the evening with a black mass fit for satan himself. Dripping in sin, their satanic doo-wops drifted through the audience in search of an excuse to be sinister. The sinister band called upon all members of the crowd to join them in summoning Lucifer himself before closing out their set with an eerie tune fit for raising the dead.

While Twin Temple had an impressive fanbase present for their set, it was nothing compared to Amigo the Devil’s fans. While the Marquis’ small stage might seem like enough for a one-man act like Amigo the Devil, the space was hardly large enough to contain his larger-than-death personality.

Known for his upbeat melodies that combine with dark lyrics about sinister topics, Amigo the Devil unsurprisingly drew a unique crowd. Fans in attendance wore predominantly black with no shortage of satanic messages printed on their t-shirts. With fake blood dripping from their heads, and even a few pentagrams, it was clear that though Amigo the Devil’s music may seem unusual to the average listener, it is far from being unrelatable.

With a stage presence that commanded the attention of everyone in attendance – including the venue’s bartender who nearly stood on the bar to get a better view – it’s easy to see how a singer-songwriter who revels among the undead developed his following.

Amigo the Devil’s live performance added an additional layer to his distinctive vocals. Sounding louder and far more powerful, his gruff voice told the Marquis stories of love and death – tinged with his signature brand of light-hearted humor. Analyzing the trials of life through a unique perspective, Amigo the Devil is an act unlike anything else.

When a fight broke out amidst members of the crowd, the artist did his best to play through the disturbance. However, when it became clear to him that his fans were too riled up to let bygones be bygones, he stopped his performance before sending a member of his crew into the crowd to resolve the issue. He then took the time to tell his fans about the value of treating each other well before throwing his setlist over his shoulder and deciding to improvise.

Fortunately for fans who were annoyed by the evening’s disturbance, Amigo the Devil’s expertise was all that was needed to bring the energy of the evening back up. Kiranos opened up about his own struggles with mental health, making it clear that the lyrical themes present in his music are far more than simply characteristics of his alter-ego.

Despite the sinister lyrical topics, Amigo the Devil’s presence was more than enough to convert the audience to the dark side – though it’s likely the fans in attendance were already on it. Amigo the Devil showed Denver how to live dangerously and embrace our guilty pleasures – and we can’t wait to do it all again.