All Photography By Jason Stiglebouer

This summer marks the 20th anniversary of one of the most iconic alternative albums of the ’90s — Enema Of The State. The record — released by the reigning kings of pop-punk Blink-182 — is a hallmark of the mid-’90s and early 2000s. Millennials nationwide love the album for its hits, including “What’s My Age Again” and “All The Small Things.” So, an opportunity to experience the hits of our youth in person was an experience countless Denver fans couldn’t pass up — though the 20th anniversary of the record left us all feeling a bit older than we’d care to admit, I guess this is growing up.

Blink-182’s visit to Denver kicked off in the most appropriate way possible — with UK-based opener Neck Deep. The pop-punk band has risen to the top of the scene since their 2012 inception, amassing an impressive fan base. However, their success in a scene that was previously dominated by Wednesday night’s headliner was not the reason why their Pepsi Center appearance was so appropriate. Vocalist Ben Barlow is a massive Blink-182 fan — in fact, he covered one of their songs on YouTube a full year before Neck Deep formed. Considering the love that Barlow and the rest of the band have for Blink-182, there could not have been a better choice to open for the most nostalgic tour of the year. 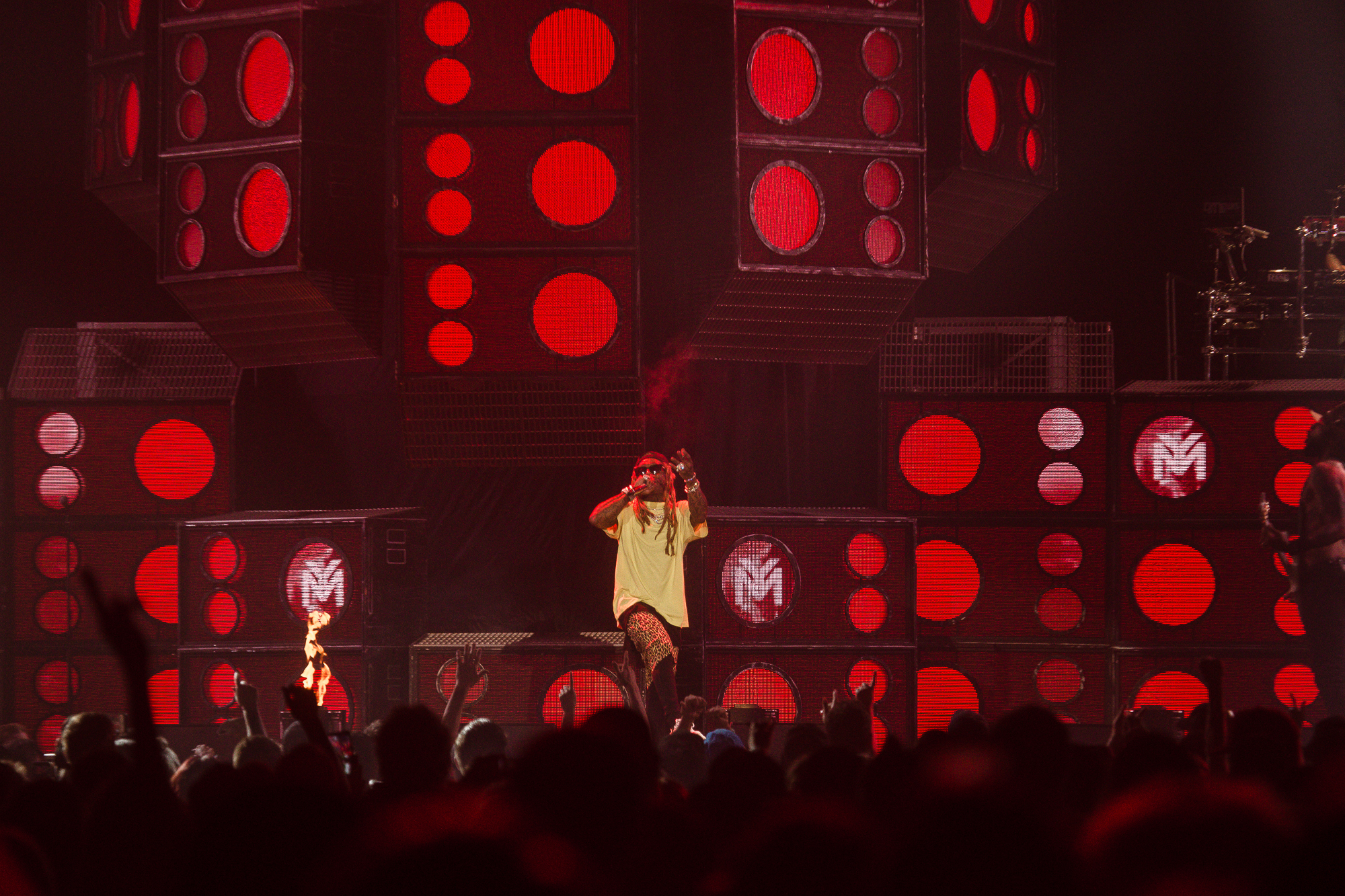 Barlow dedicated a portion of Neck Deep’s set to discussing his adoration for Blink-182 — a feeling that nearly all fans in attendance could relate to. While Neck Deep seemed an appropriate opener for the show, the next act was a considerably more confusing choice. A significant number of fans flocked to the Pepsi Center to see an icon of the early 2000s — Lil’ Wayne.

Lil’ Wayne’s set was marked by nearly 30 minutes of hype music presented by his DJ, DJ T. Lewis. Though the introduction lasted close to half of Lil’ Wayne’s allotted set time, it was far from a disappointment. DJ T. Lewis expertly selected all the best bits of every party song from the early 2000s. The Pepsi Center pulsed with the energy of the best night club imaginable. Then, only when the party had fully overtaken the crowd, Lil’ Wayne himself erupted onto the stage with all the explosiveness of a bomb. 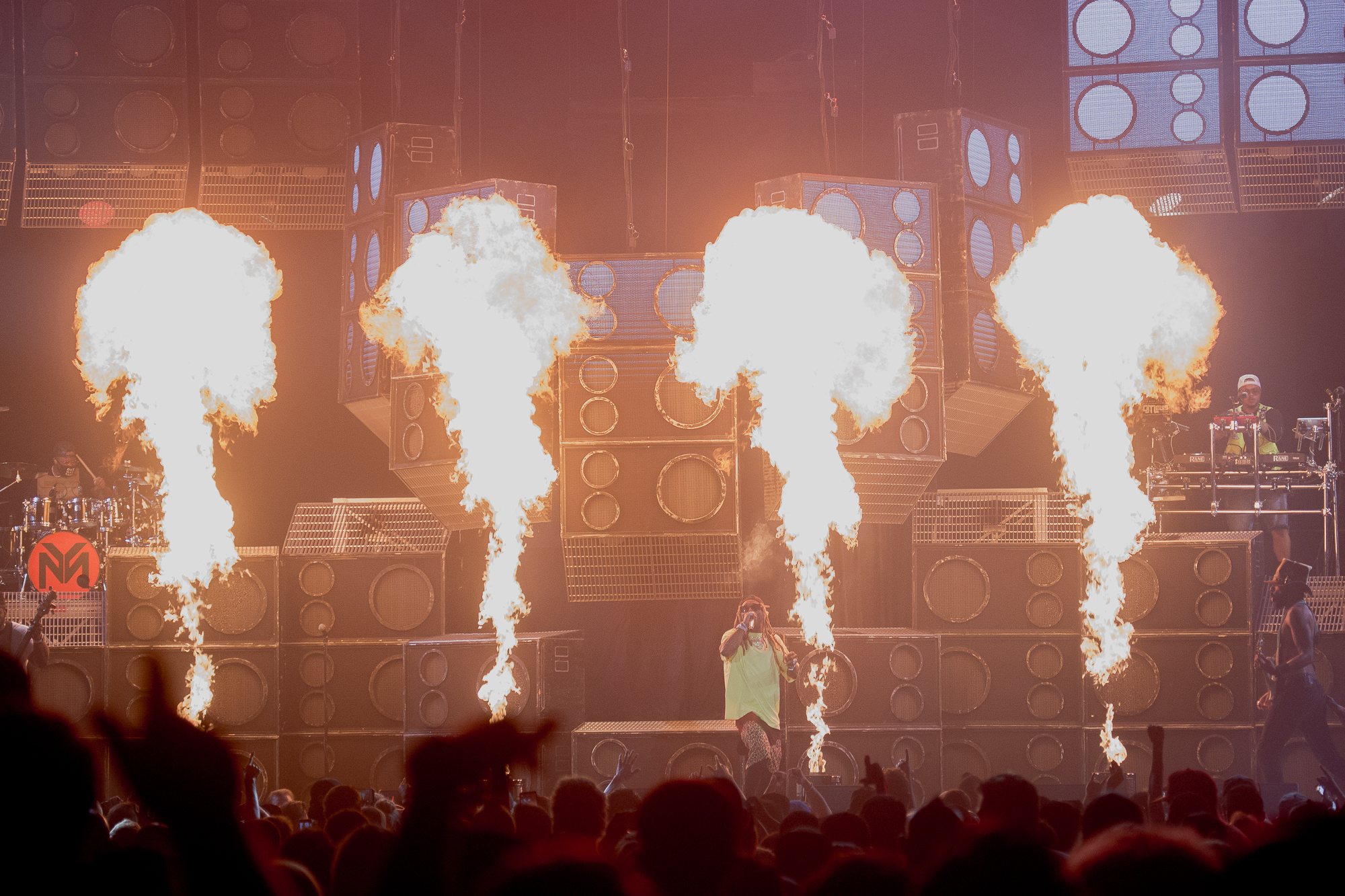 “This is the second leg of the tour,” announced Lil’ Wayne. “That means we been to a lot of fuckin’ places already. This is the craziest it’s been.” With the rapper moving confidently across the stage, concert-goers quickly forgot the headliner they had come to see. Lil’ Wayne moved confidently across the stage, burying fans in pulsing bass lines and fast verses. Though the rapper may have pulled hits from a different genre than what Blink-182 planned to deliver, Lil’ Wayne provided a set full of nostalgia — and it was one hell of a good time. 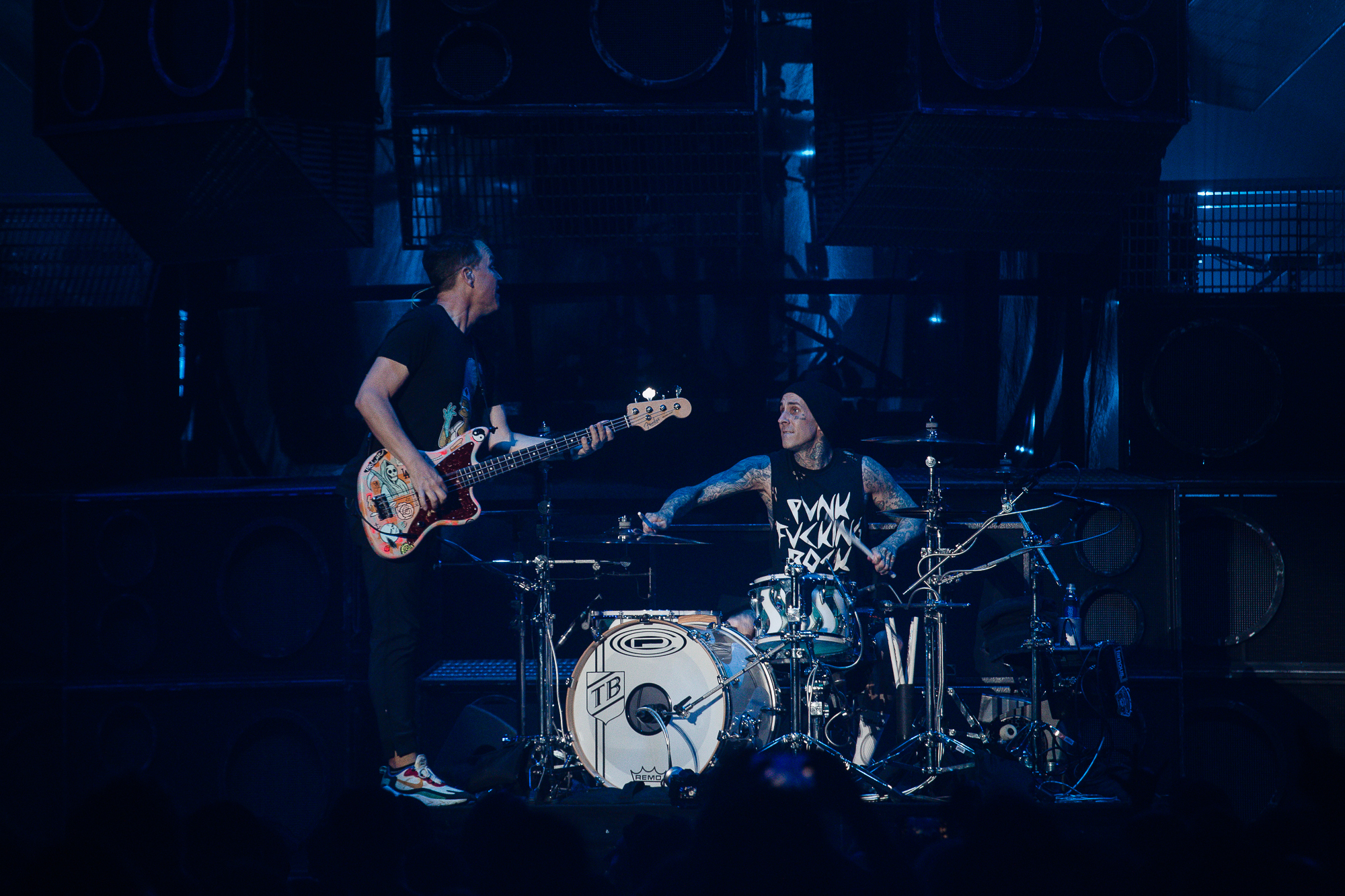 If Lil’ Wayne’s eruption onto the stage was like a bomb, then Blink-182’s entrance had all the power of a nuclear weapon. The titans of pop punk burst onto the stage and immediately launched into the fast punk of their early years. They ripped through the first few tracks of Enema Of The State without stopping for breath, unapologetically leaving behind fans who took too much time to peruse merch and refill their beer between sets.

Though there were few reprieves from the onslaught of punk songs, the interludes between songs were filled with the humor the band displayed on-stage throughout the early years of their career. Inflatable aliens were unleashed upon the crowd for “Aliens Exist,” the third track from the album. With enlarged green heads towering over much of the audience, it was hard to overlook the humor of previous vocalist Tom DeLonge’s obsession with UFO’s and aliens. 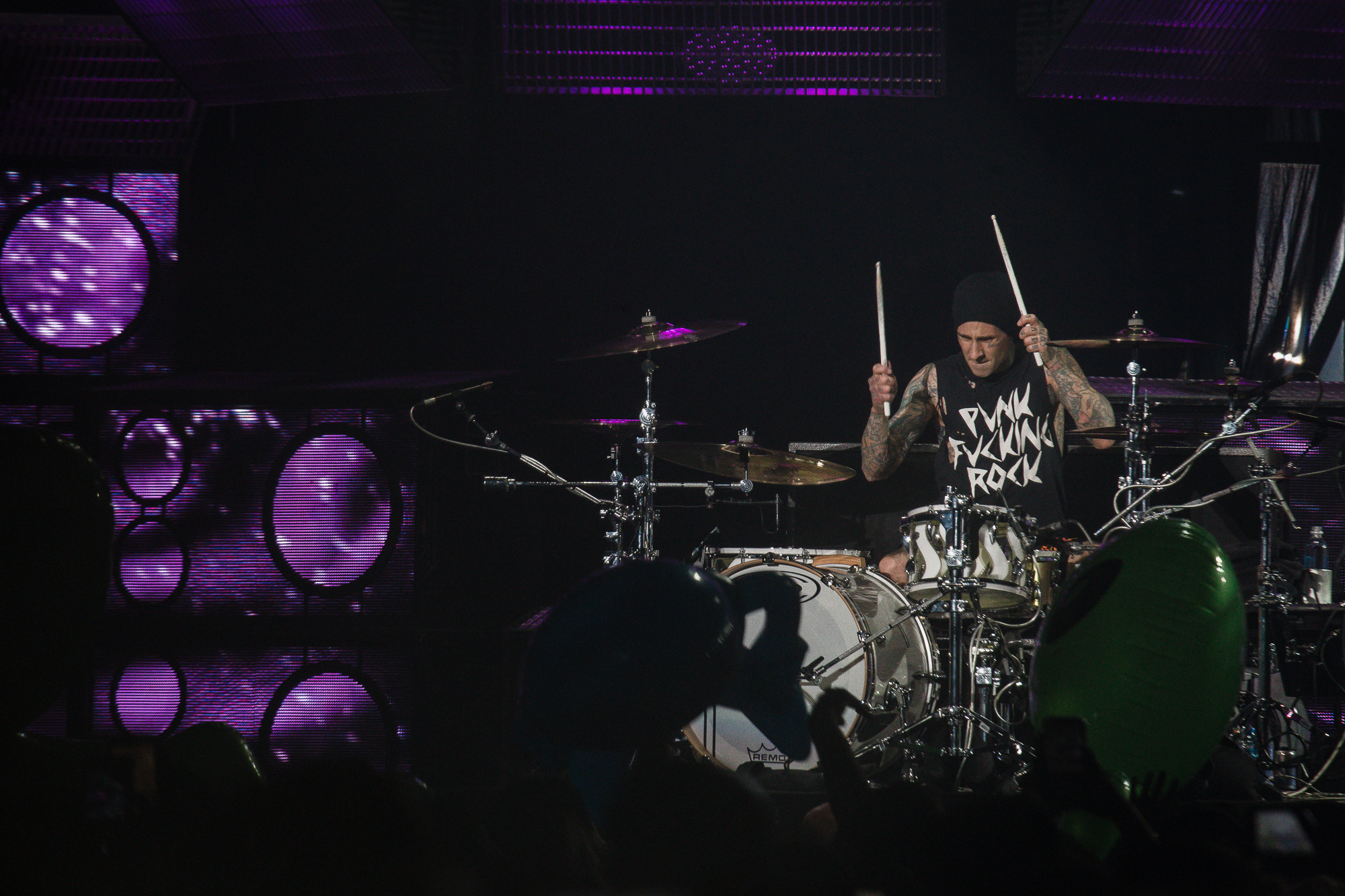 After blazing through every track on Enema Of The State from front to back, the trio of punk rockers disappeared from the stage, leaving fans wondering if the encore would be a deep dive into the band’s old hits or a journey through their most recent album. The encore proved to serve as both. After a short time waiting in literal darkness, the crowd was greeted by an appearance from Matt Skiba and Mark Hoppus in the back of the crowd for a brief duo of acoustic songs, before everyone’s attention was turned back towards the stage to see Travis Barker’s electrifying drum solo as he and his drum set rotated in all directions inside a spherical cage in the center of the stage.

Blink-182 rolled into the rest of their encore without missing a beat, playing songs from all points in their discography. They teased their upcoming album, playing one of the singles that has already been released. While they performed songs for fans from every era of their career, the highlight of the encore was “I Miss You,” the hit song from their self-titled album. While some may have been concerned that DeLonge’s iconic vocals would be missing, the band knew exactly how to handle it — letting fans sing the verses that could have been lacking without DeLonge’s crooning bravado. 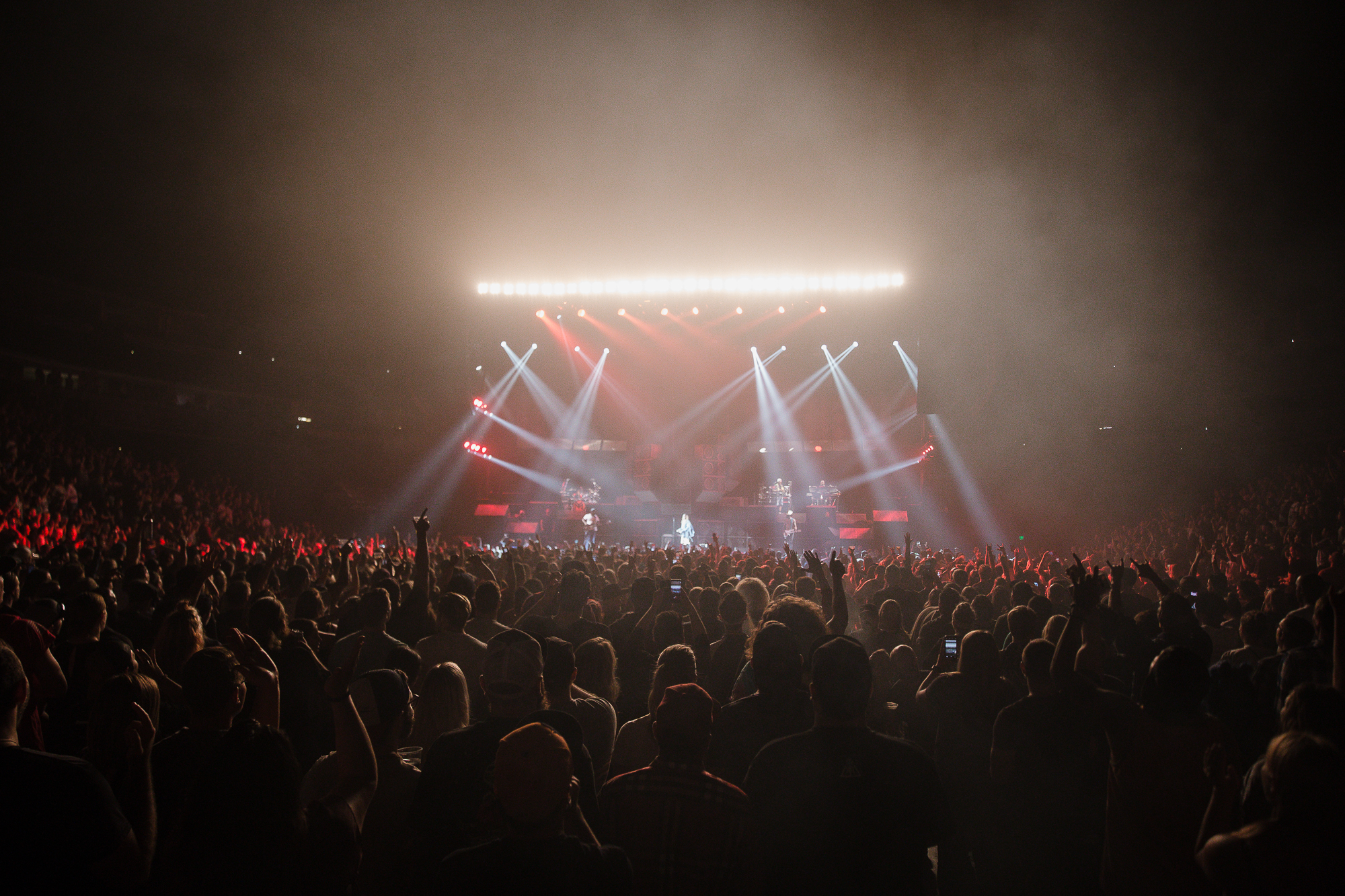 Though there were few chances for fans to slow down throughout the evening, Blink- 182’s performance was far from tiring. They delivered the fast-paced performance demanded by the songs on Enema Of The State with all the enthusiasm of a young band who has yet to grow weary with the demands of touring. The band may be growing older, but Blink-182 is doing anything but growing up.