On Saturday night, 303 Magazine put on 303 Cover Challenge LIVE, based on the popular cover challenge series online. The lineup, as diverse as Denver’s music scene, featured artists from all over the musical map. As the audience of the night began filtering into the room and grabbing their beers, DJ Tyler Wyatt of the Gods of Groove Collective warmed up the crowd with an extensive setlist that included everything from Drake to Bell Biv DeVoe. Before long, it was time for the live part of the show to begin and house band Los Mocochetes started taking their place on stage. 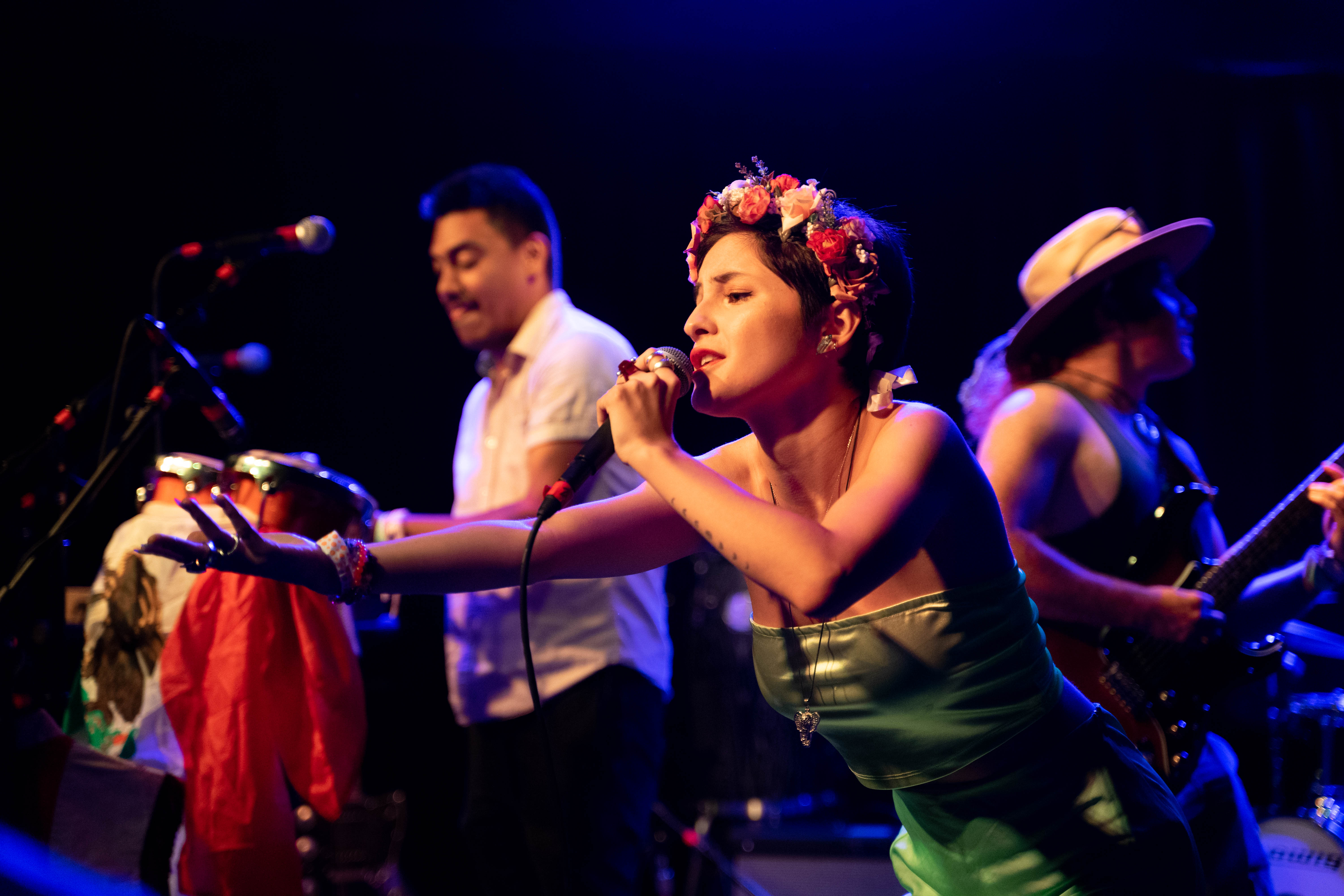 As soundcheck began, Jozer Guerrero warmed up the crowd. “How are the Denver natives doing?” he yelled, before addressing the other group in the room. “How about the transplants?” The crowd happily obliged, screaming whenever he addressed each group. The band slid into their set, starting off with a Santana cover and moving into a mash-up of “La Bamba” and “Twist and Shout.”

The first featured artists to grace the Marquis Theatre stage were the two youngest of the night. First, was teenage Ecuadorian sensation Neoma, wearing a flower crown on her head. Though she doesn’t usually sing covers at her shows, she seemed right at home as she sang Natalia Lafourcade’s “Nunca es Suficiente,” holding the microphone out to the audience at times to hear them singing back to her. Los Mocochetes guitarist Joshua Abeyta jumped into the dance floor to spin around an audience member. 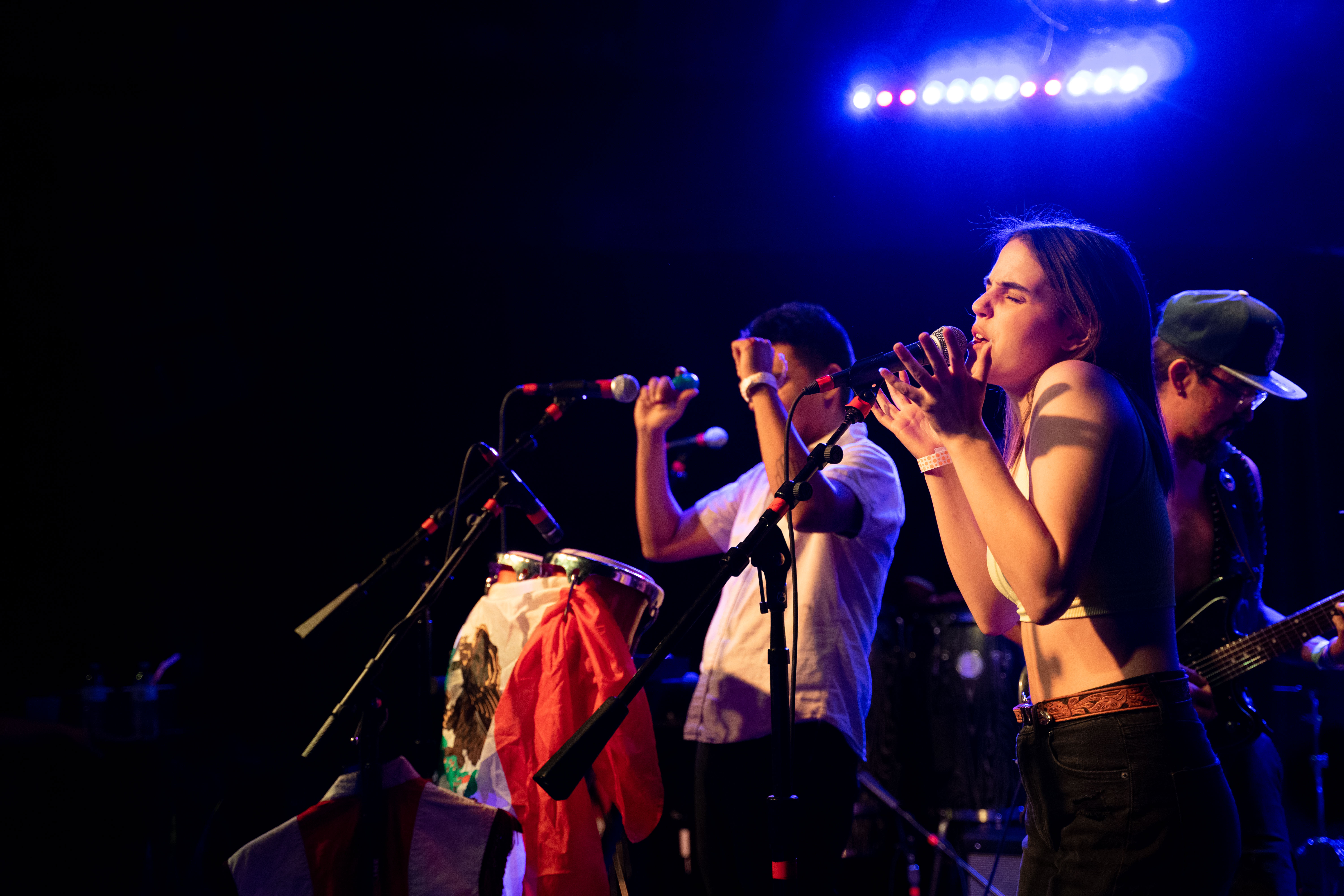 Next up came Bailey Elora, introducing herself as a part of Youth on Record, an organization dedicated to empowering underserved youth in Colorado. Elora started with a cover of “Valerie,” a fitting song to celebrate what would have been Amy Winehouse’s 36th birthday. The room danced and jumped around as she gave the song her own spin with a raspy vocal technique. Elora followed that up with a little bit of Lizzo as she covered a unique version of “Truth Hurts.” The pop-culture significance of this number one hit could not be denied when the entire room knew every single word.

Zach Maxwell took over with another Santana cover, “Smooth.” Afterward, Maxwell attempted a unique cover of Prince’s “I Wanna Be Your Lover,” complete with a talk box and piano synthesizer. However, halfway through the song, he smartly ditched the instruments when they weren’t working for him, instead re-taking his place in the center of the stage to show off his falsetto and signature dance moves. 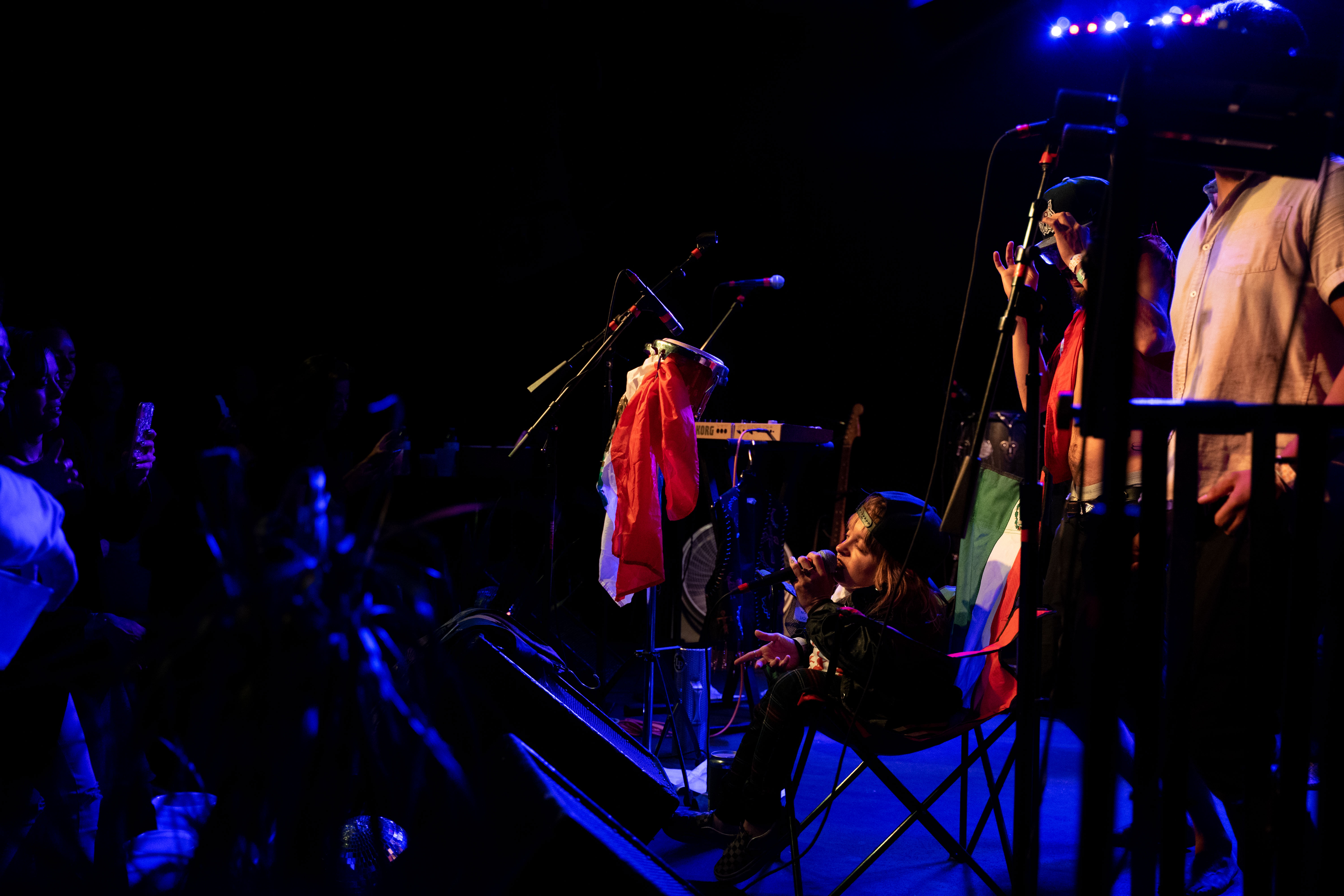 In-between musicians, Los Mocochetes kept the crowd warm by interacting with them, yelling things like, “On the count of three, yell your favorite taco!” and waving a lawn chair emblazoned with the Mexican flag in the air to get everyone excited for Denver mayoral candidate and MC extraordinaire Kalyn Heffernan to take the stage.

Heffernan was carried on stage by Abeyta and set down in the lawn chair at the front of the stage. “Well, he didn’t drop me,” she joked to the audience. Her powerful lyrical flow was on full display as she took on Kendrick Lamar’s “Humble,” with the audience jumping up and down, yelling “Sit down, bitch, be humble,” right back at her. Los Mocochetes’ Guerrero and Abeyta took the opportunity performing with Heffernan to sit on the stage with her, acting as her hype men. 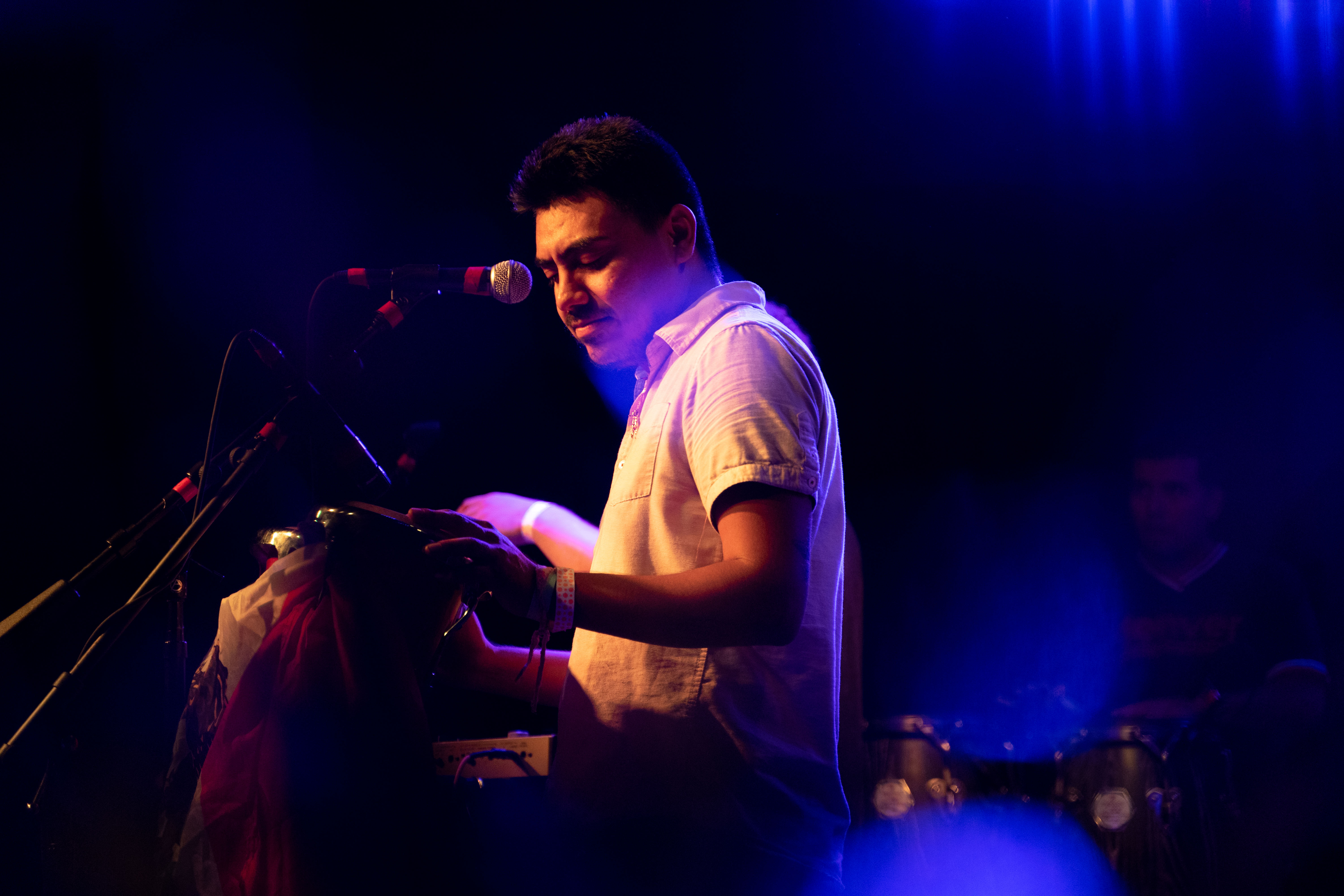 The other rappers of the night were clear crowd favorites. Cisco the Nomad gave a high energy performance, covering Anderson Paak.’s “Come Down” and Snoop Dogg’s “Gin and Juice,” getting the entire crowd jumping up and down, rapping along. Despite never having performed with a live band before, he and Los Mocochetes were in total sync, feeding off the energy in the room. Kid Astronaut also delivered an exciting set with his renditions of “Sky Walker,” “The Seed” and yet another Santana hit, “Maria Maria.” He showed the room a lot of love, clearly wanting to entertain, and the crowd matched his energy. 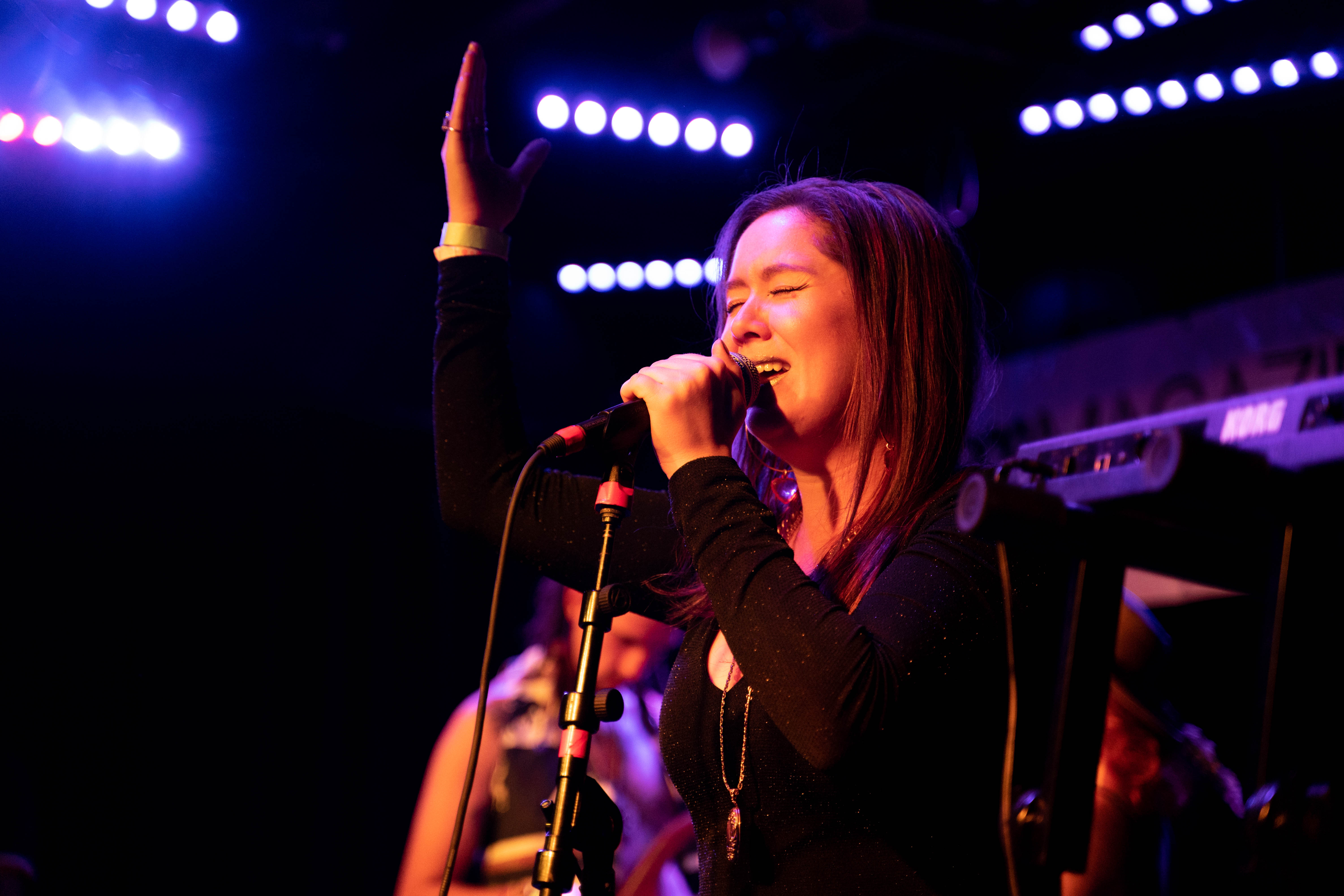 Coming away from Cover Challenge LIVE, two clear highlights were powerhouse singer-songwriters Kaitlyn “KDubbs” Williams and Nina de Freitas of Nina and The Hold Tight. Williams showed off her vocal prowess with her soulful take on Bob Marley’s “Is This Love,” hitting every note with an easy confidence. She also performed the late Mac Miller’s “My Favorite Part,” collaborating with Cisco the Nomad. After a rough start, Williams, Cisco and Los Mocochetes hit their groove and Williams continued to demonstrate her talent, harmonizing and riffing whenever she got the chance.

When de Freitas took the stage, she completely took command of the room. Performing “It Smells Like Teen Spirit,” every person on the floor forgot the drinks in their hands, jumping up and down with wild abandon and headbanging to the 1991 classic. Demonstrating the scope of her talent, she then told the audience to “follow me to the land of dreams,” launching into Fleetwood Mac’s “Dreams.” The whole room was held captivated by her smoky rendition and swayed back and forth, never taking their eyes off the stage. 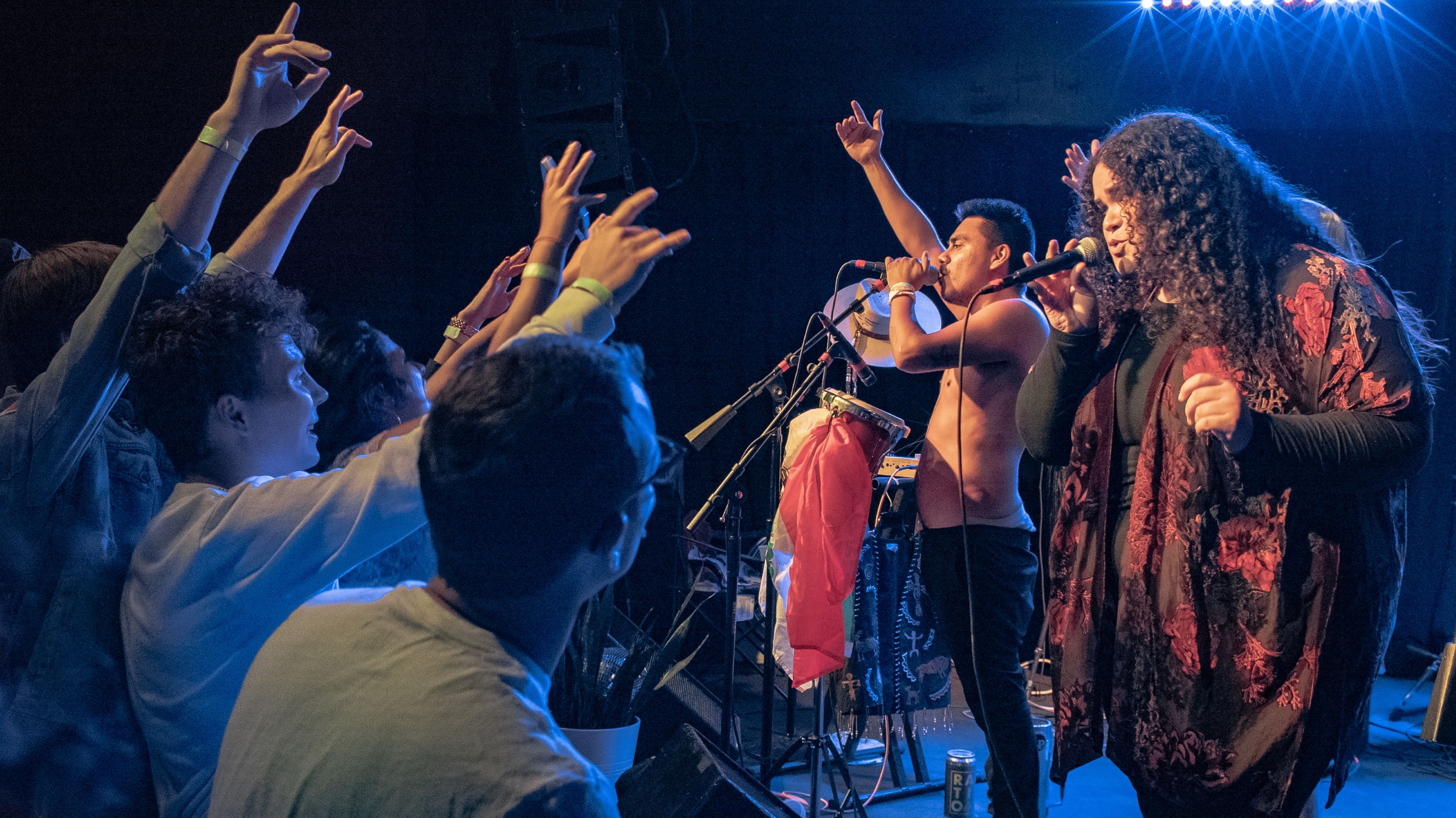 303 Cover Challenge LIVE’s greatest success came in exposing the audience to the best of Denver’s music scene and highlighting the talents of these much-deserving local artists, putting them out there as musicians to continue watching and listening to. It’s clear that Denver is a lucky city to have these musicians calling it home and its ever-expanding, ever-changing music scene just means there’s always more to come.