In Colorado, we’re used to adventurous adrenaline junkies sharing anecdotes of hiking fourteeners, planning backcountry hut trips, ice climbing and other perilous pastimes, but they’ve taken it to a whole new level. Have you ever wanted to go camping — in the sky?

Well, in Estes Park, you can. Eight years ago, the Kent Mountain Adventure Center (KMAC) got a phone call from a TV producer who worked with British TV presenter, travel writer and actor Charley Boorman. He asked KMAC’s co-owner and director, Dustin Dyer, if they were able to take Boorman cliff camping to shoot his new TV series USA Adventure.

“We put him on hold and googled cliff camping because we didn’t know what that meant and found pictures. We were like ‘Oh, we can totally do that. Sure. Why not,”’ Dyer said.

“We took them out there. We were inventing it as we went. If you watch that show, it’s a lot more controlled now. It was pretty wild filming that. It was a totally different place on a much bigger cliff. After we finished, we were like we should do that again.”

Apparently the intense request by Boorman’s TV crew wasn’t out of the ordinary for Dyer and his fellow staff of big wall climbers.

“We get calls like that a lot. It’s been sort of our specialty for a long time — inventing weird adventures on vertical terrain,” Dyer said. 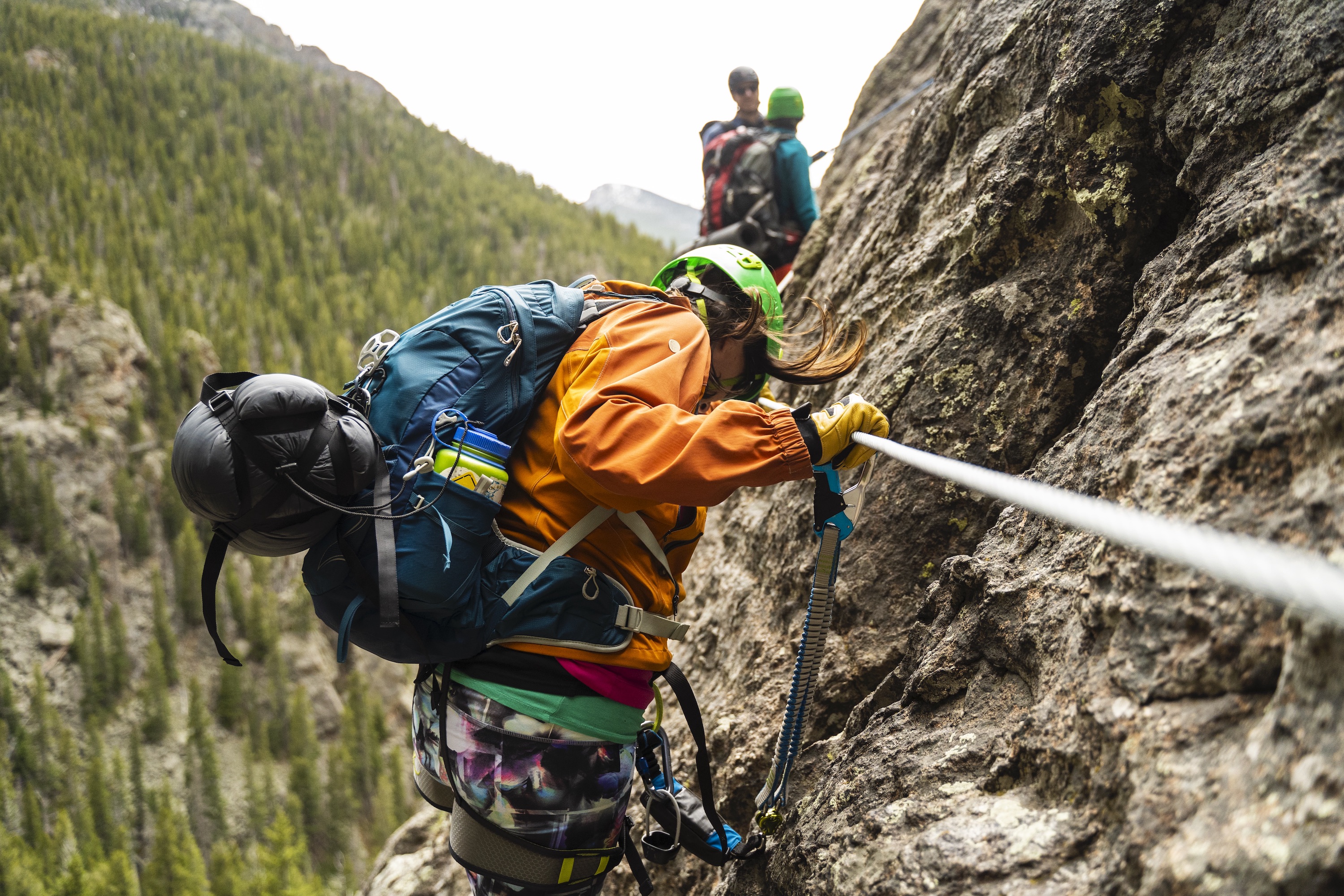 According to Dyer, the history of cliff camping began when rock climbers needed to rest overnight before continuing on a multiple-day feat. But with the Kent Mountain Adventure Center, the experience is only one night and doesn’t involve too much physical activity.

Groups of up to four people at a time or solo cliff campers will be accompanied by one or two KMAC guides depending on the party size. A typical excursion to get to the cliff camping site will involve a 15-minute drive from the KMAC office in Estes Park, a half-mile moderate hike with only 400 feet elevation gain, a short via ferrata to the top, and rappelling down to the spot where the guide(s) will set up the tents (don’t worry, you don’t have to help unless you want to learn).

If you want to learn more about big wall climbing, KMAC can set that up for you too. Instead of rappelling to the campsite, you and your party have the option of scaling the cliff face to it instead, but Dyer says most people skip that part.

“A vast majority of people who go on these trips with us have never gone rock climbing in their lives,” Dyer said.

And you don’t need to bring much either.

“All you really need to bring is just some clothes. We usually have people bring their own sleeping bag just cause they’re picky. That’s usually all the gear we ask for,” Dyer said.

All of the climbing equipment including the tents is stored in a small shed at the base of the cliff. The cliff camping area is on private property on Twin Sisters Peak within a mile of Rocky Mountain National Park. According to Dyer, using the same cliff every time makes it safer since the guides know exactly what to expect. But that doesn’t mean you can’t request a different cliff. The cost of the experience will just go up quite a bit.

“We’ve designed this cliff for our program. But we’ve done it in other places and we still can,” he said.

The cliff campsite, which is located between 9,500 to 10,000 feet, includes stunning views of the Rockies. It’s so beautiful there’ve even been guests that have climbed with art supplies and easels in order to paint it. While the hike and climb are gorgeous, Dyer said he just enjoys spending the day doing whatever the guests want to do — which differs every time. 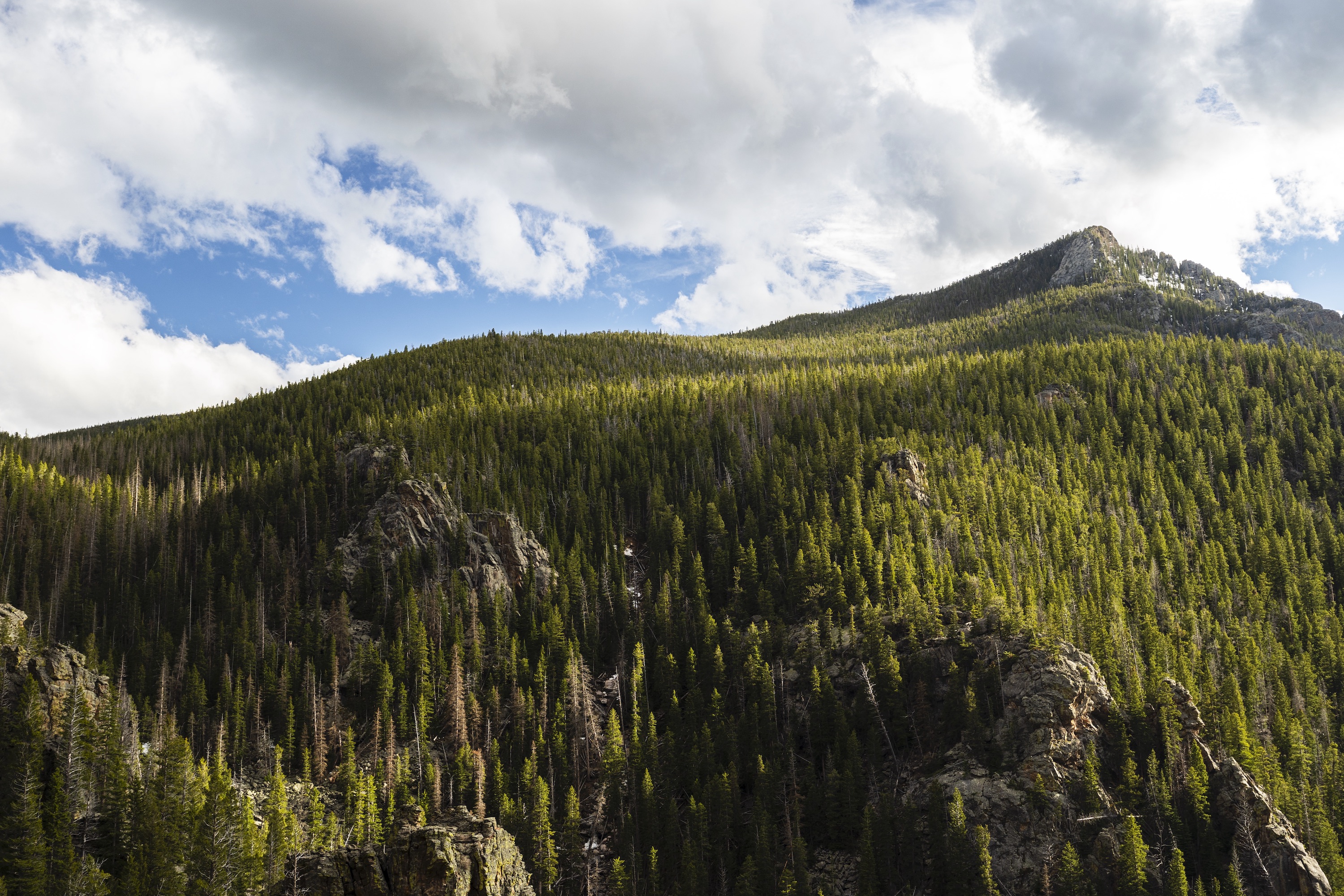 “Once somebody books, we’ll work with them to design a day that’s pretty much whatever they want. Some people want big wall climbing instruction. For those folks, we’ll go rock climbing, we’ll haul the gear up and show them techniques and strategies — that kind of thing,” he said.

“We also have a via ferrata that’s right in that region. It has ladders and cables that take you to the summit of the formation. Almost everybody goes up that thing at least once. There are some hikes. We have a whole bunch of options for people. On every one of these trips, it’ll be a little different.”

Dyer says his favorite part is settling in for the night, watching the sunset, sharing a meal and getting comfortable.

“We’ll make a nice dinner up there,” he said. The food isn’t bad either.

“When we started out, we were eating a lot of backpacking food and then we realized because it was only one night, we didn’t have to do that. We’ll talk to the group and invent a meal plan. We actually bring up cast iron stoves. We’ve been doing steaks. We did salmon a few weeks ago with a group. We usually do omelets for breakfast. We custom design the menu for each trip so it’s different every time.”

“Just staring at the stars and sleeping in the sky is pretty cool,” Dyer said.

Also — sleeping off a cliff isn’t as uncomfortable as you might think. You’ll actually get a good night’s rest.

“If you compare people’s expectations to what actually ends up happening, I would say most people say, ‘There’s no way I’m going to sleep up there. That’s impossible.’ But I actually think it’s one of the most comfortable places. I sleep really well up there,” Dyer said.

“It’s almost a psychological thing or something, but wherever you sleep in general in life, there’s always something that could happen to you. Somebody could break into your house. If you’re camping, there could be a bear or something out of there in the shadows. There’s probably not. I’ve camped a thousand nights and have never seen anything, but that idea is always there. On the ledges, all of those things are gone. There’s nothing that can come get you.” 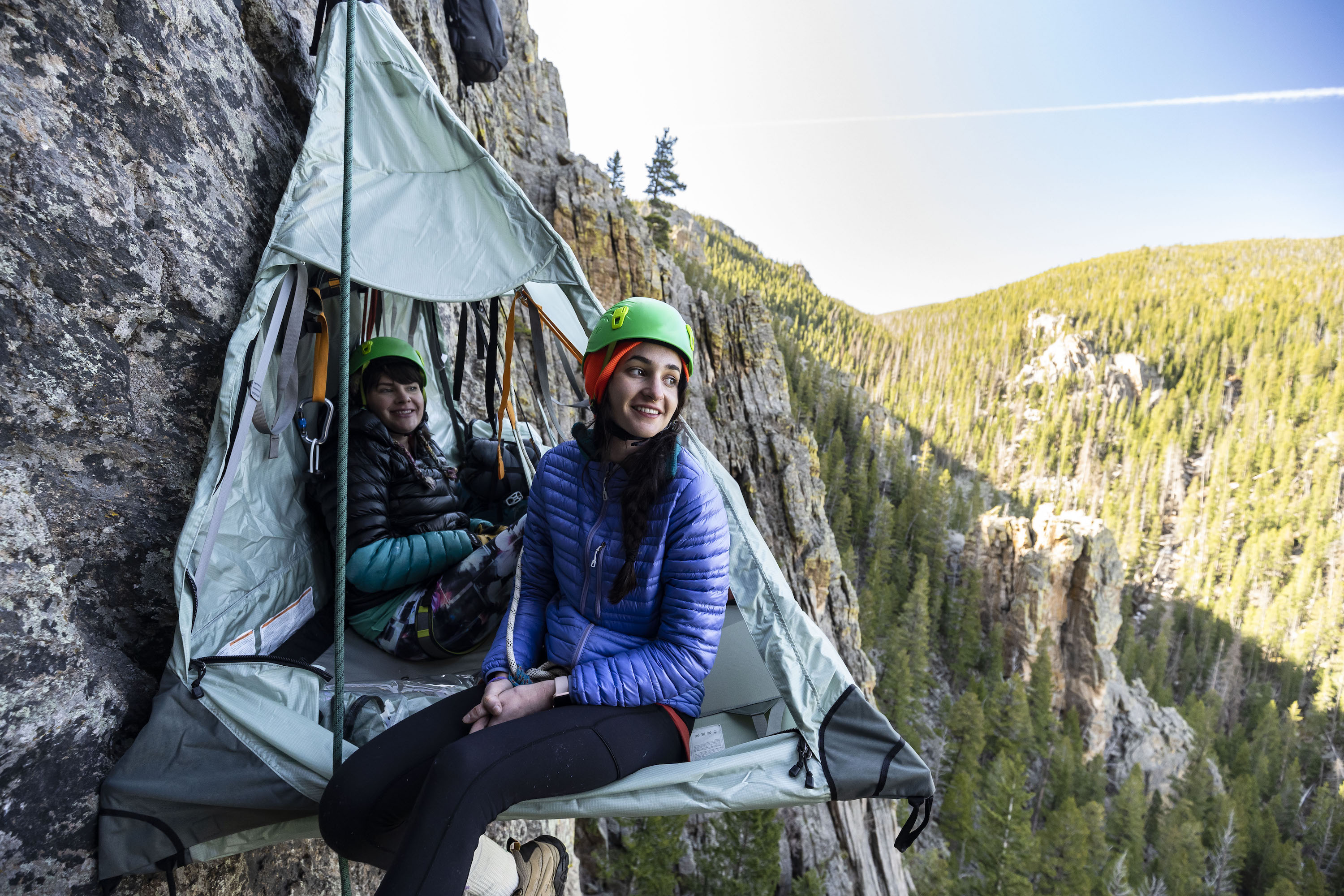 As far as safety goes, Dyer reassures us that even while sleeping, you’ll be strapped in the entire time.

“One of the rules we have up there is that everything gets clipped in. But you can spread out a bit. It’s not like sleeping on a queen-size mattress or anything, but it’s as comfortable as anything in a tent is.”

Well, it sounds like it’s not so terrifying, but we have to ask the important question ⁠— what do you do if you have to use the bathroom? The good news is that there’s a composting toilet installed at the base. The bad news is that it’ll take you almost a half hour to climb down to.

“It’s not like ‘Yep, just go run down there.’ It’s a whole thing. So what we do is if you need to go number two, we use these thick trash bags with chemicals in them. You poop in the bag and the chemicals turn it into a gel. They seal up and they’re like triple bagged. They work pretty well if that’s needed, which isn’t very often,” he said.

“As far as pee, for guys, we just go into a water bottle and for women, we give each guest a LadyJ (female urination device) and show a video that they’ve put out on how to use it and what to expect. It’s basically a funnel kind of thing that’s used to let women pee into a bottle also. About half of the female guests we’ve had loved it and the other half went out of their way to not use it.”

As much as everything’s planned to make people feel perfectly comfortable dangling thousands of feet in the air overnight, Dyer knows cliff camping isn’t for everyone.

“Everyone’s scared of heights to some degree. If somebody has a paralyzing fear of heights, this is definitely not a good option for them. They won’t have fun. For a lot of people out there, they’re just mildly afraid of heights. That’s evolutionary. If people can deal with that fear in one form or another, then they’ll have a great time,” he said.

“There’s a certain person that watches those movies that are popular these days where they see someone big wall climbing. There’s a certain percentage of the population that sees that and says ‘That is the coolest thing I’ve ever seen. I want to do that.’ And that’s who we designed it for.” 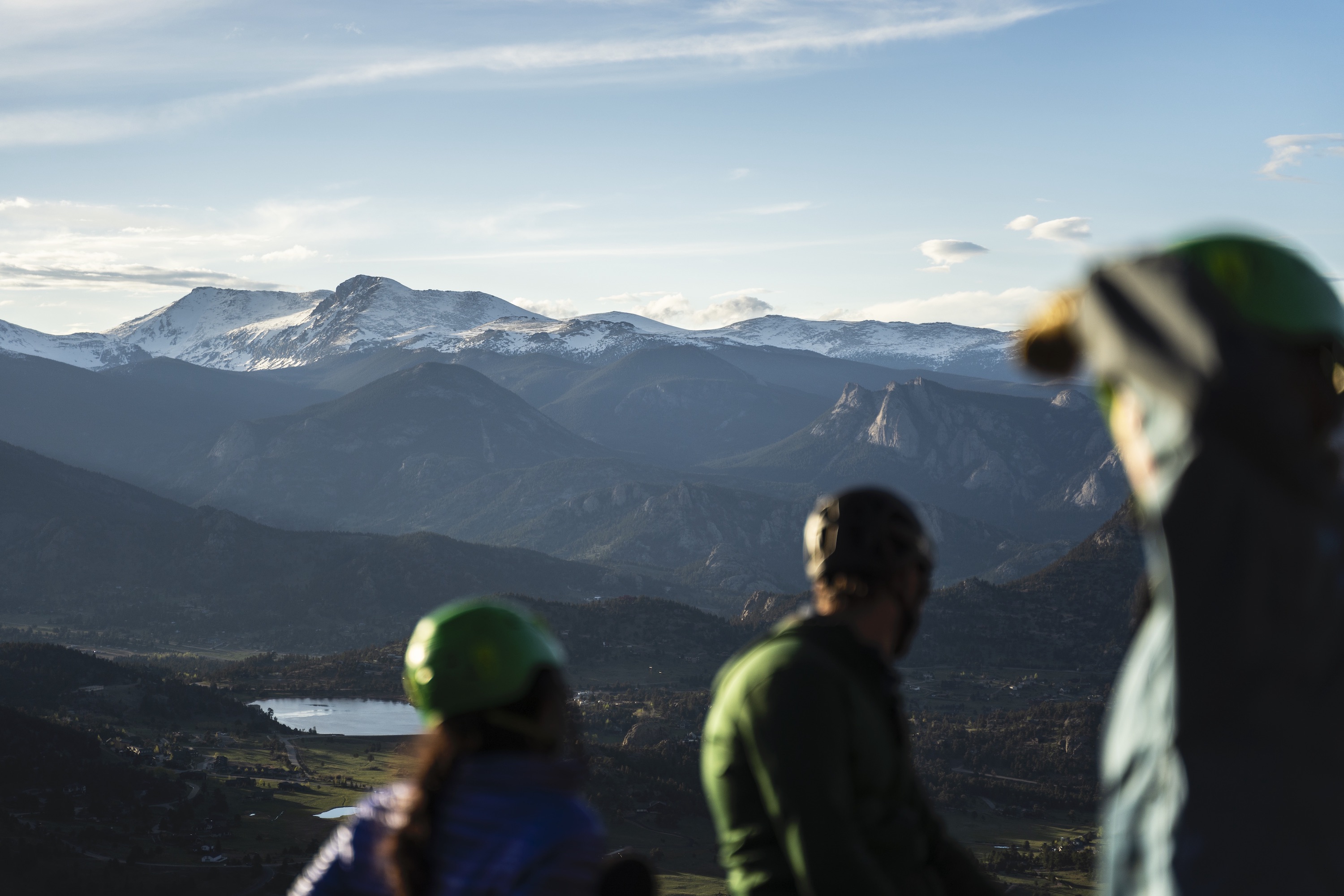 The Kent Mountain Adventure Center is located at 520 Steamer Pkwy., Estes Park, Colorado and is open every day from 9 a.m. to 5 p.m. Visit the center’s official website here for more information. You can book this experience on Airbnb here. Cliff camping starts at $675 per person in a group of 3 or 4, $800 for a group of 2 and $1,200 for a solo adventure.