Review – Angels & Airwaves at the Fillmore Was a Grand Human Experiment

Back before the positivity trend — before Gretchen Ruben’s The Happiness Project and the existence of gratitude journals — being hopeful in a society that breeds cynicism was actually the bravest, most punk thing to do. At least, that’s what Tom DeLonge thought when he started Angels & Airwaves (sometimes stylized as AVA) in 2005. Last night at Denver’s Fillmore auditorium, the space-rock supergroup made it their mission to kindle human connectivity through shared sonic experience. And boy did they catalyze radical joyfulness. 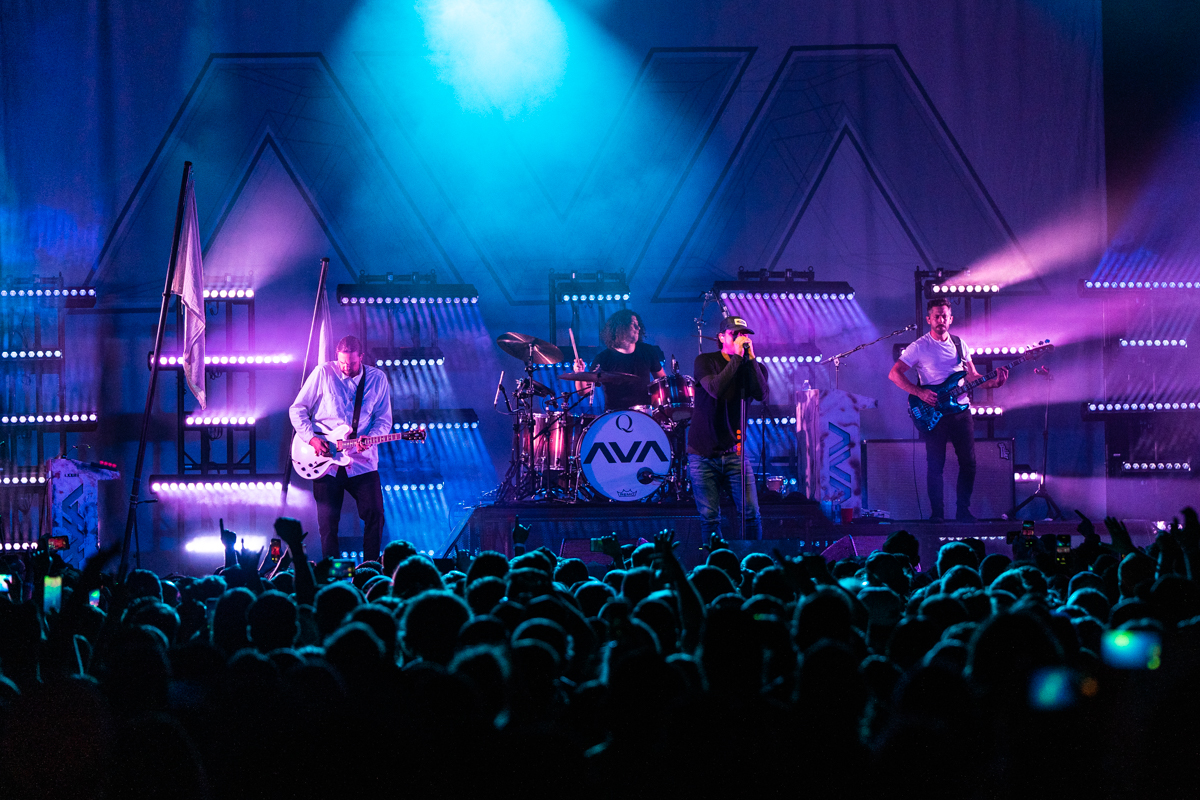 The evening began with a set from Charming Liars — an alternative rock band from LA and London. They flattered us by saying Denver has a lot of soul right before they launched into “Soul”, their 2016 single, which had audience members swaying their alighted phone screens. Overall, Charming Liars really embraced their role as an opener — I daresay they tried too hard at times. Still, their delightfully spacious tunes of varied tempo turned Fillmore’s floor into a sea of smiling, bobbing heads. Kiliyan Maguire’s vocals — think Matthew James Bellamy of Muse — went a long way toward this effort. 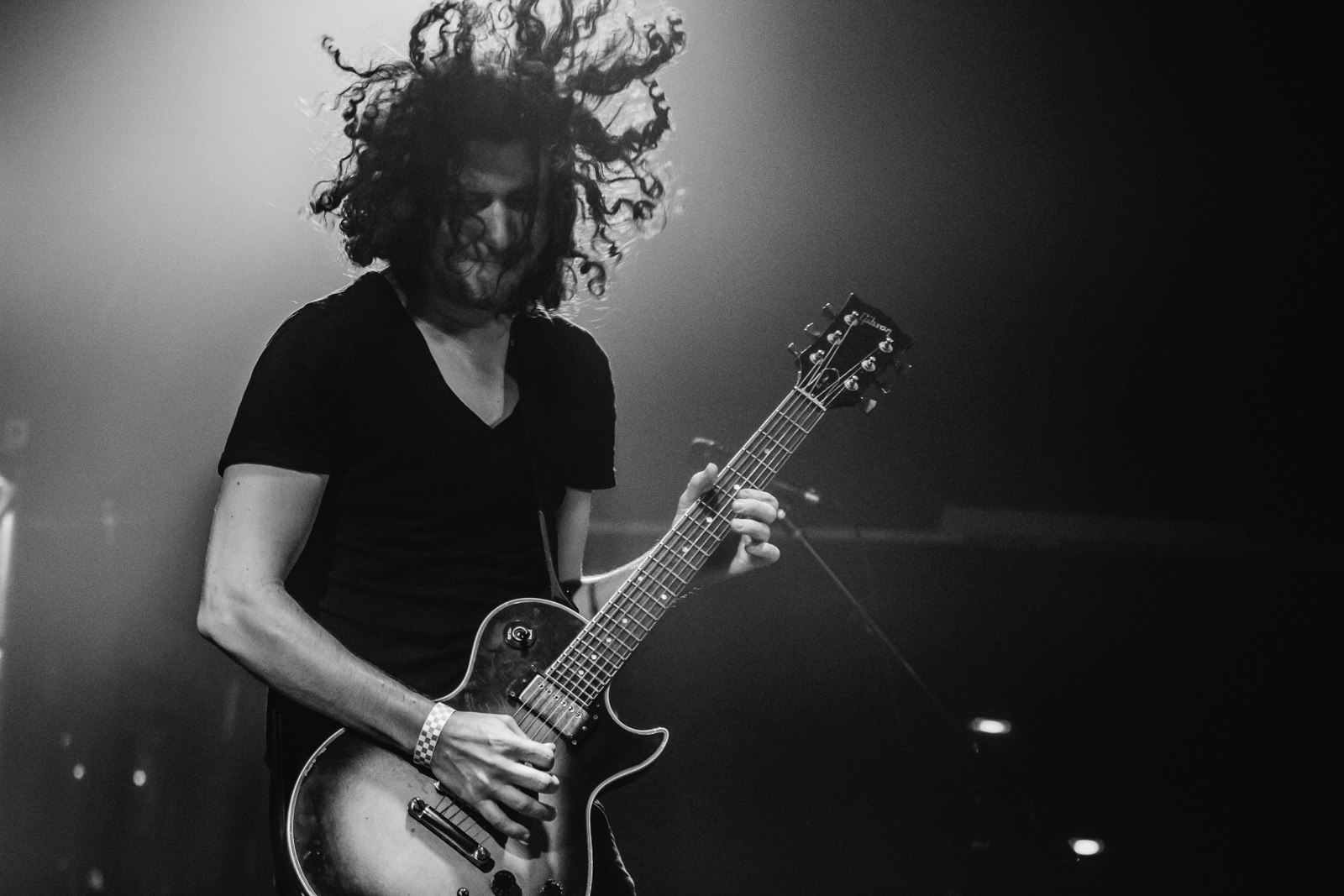 The second opening act was The New Regime — the moniker under which the AVA drummer Ilan Rubin publishes his solo work. Rubin is singularly responsible for every sound on The New Regime’s records — he sings and plays the bass, drums, cello, guitar and piano — but a band joins him for live performances. Onstage with The New Regime, Rubin played electric guitar and sang lead vocals, and both of these acts earned some whoops during “Say What You Know”. This industrial-rock inspired set satisfied the metalheads in the venue, but didn’t always resonate with the fans who showed up last night chiefly to relive their pop-punk scene kid days with Tom DeLonge.

After two brisk and energetic opening acts, the AVA set began at 9:05 p.m. Before the band members took the stage, there shone in the background a single line of blinking white lights, which burst into rows and rows of little gleams that mimicked twinkling stars. Outer-space is somewhat of a career-long theme for Angels & Airwaves (it’s the setting of their 2011 film, Love) and the galactic aesthetic continued to build throughout the night.

The two white flags positioned onstage suddenly made sense once DeLonge, Rubin, guitarist David Kennedy, and touring bassist Rubano assumed their positions and threw themselves into “Surrender” — a song from the 2011 album Love Pt. 2. Without pause they charged through five zestful songs, including past hits like “It Hurts” and “Everything’s Magic” — both of which the audience recognized within the first three notes. 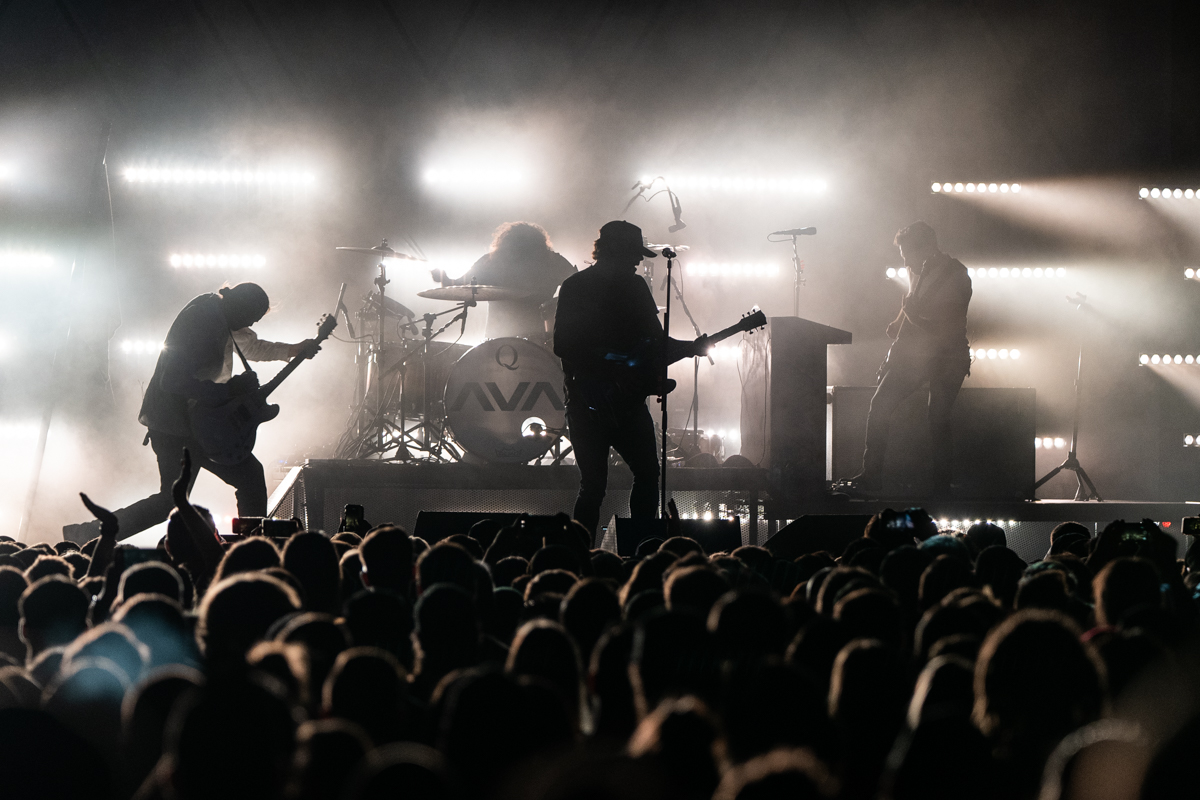 AVA’s North American tour marks their first tour in seven years. Therefore, songs from the band’s 2014 album The Dream Walker and 2016 EP Chasing Shadows debuted live only a month ago on the first night of the tour in Solano Beach, CA. Tracks like “Wolfpack” and “Kiss With a Spell” (both from The Dream Walker) were received positively by the Fillmore crowd, no question. Still, the songs off these two recent albums garnered less enthusiasm than the decade-old hits from We Don’t Need to Whisper and I-Empire.

This is not to say that the best days of Angels & Airwaves is behind us. When they played their new single, “Rebel Girl” — released April 30 of this year — almost everyone sang along from start to finish. The audience’s excitement during this performance could’ve fooled anyone into believing that this song was one of their legacy hits from 2006. The fact that one of AVA’s newest songs received the same reaction as their early self-defining hits is a sign of the band’s promising future, however up-in-the air that future seems now.

Other highlights of the evening include the band’s presentation of their original song, “The Adventure”, which had people jumping up and down on the Fillmore floor. Tom DeLonge turned the mic to the audience to sing much of it — a fitting gesture for a song whose lyrics are, “I can’t live, I cannot breathe / Unless you do this with me.” At the song’s conclusion, DeLonge exclaimed, “That shit was religious!” 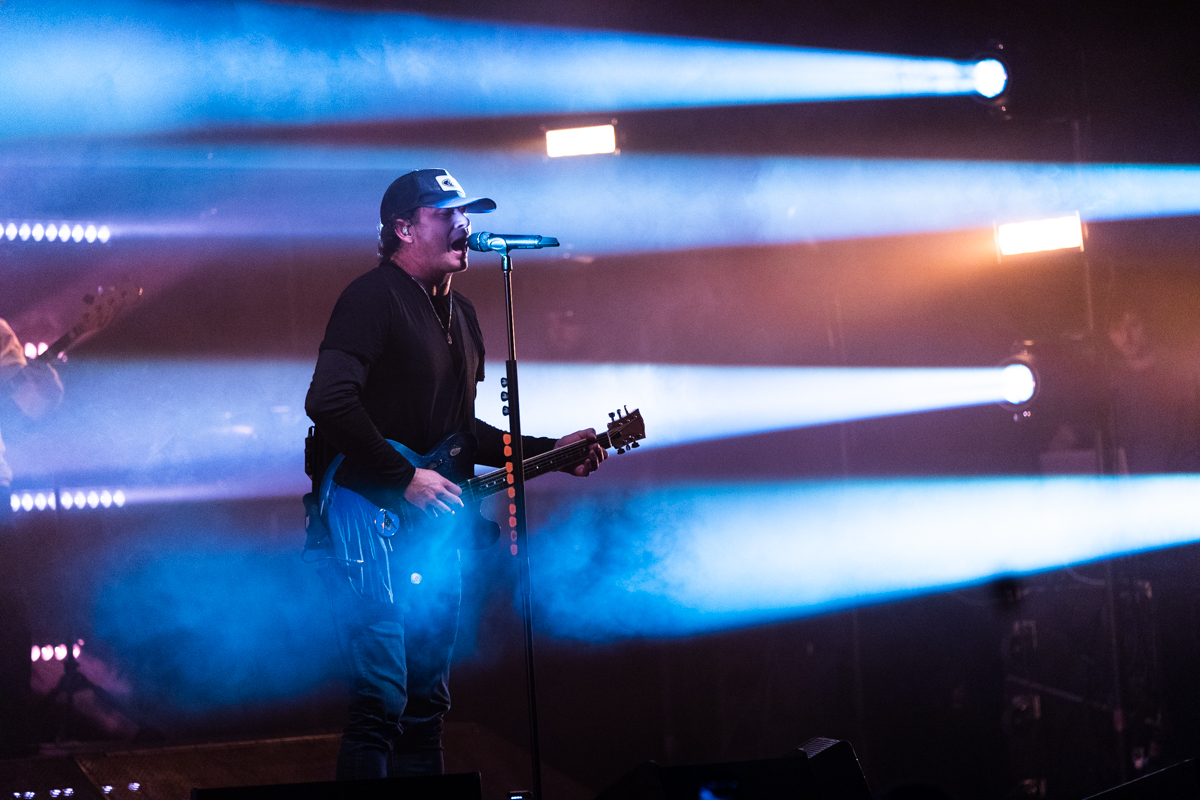 The night’s special treat was unquestionably DeLonge’s acoustic medley of songs he wrote with Blink-182 and Box Car Racer. Instead of singing any of the songs all the way through, he sang the catchy parts of each, interrupting himself to tell stories (both factual and imagined) and reminisce on previous Denver visits. The medley began with Blink-182’s “I Miss You” (perhaps you know it as the “voice inside my yead” song) and Box Car Racer’s sentimental “There Is.”

To wrap up DeLonge’s acoustic segment, he unsurprisingly played Blink-182’s 1999 song, “Aliens Exist.” When Blink-182 played this song at the Pepsi Center earlier this month (without DeLonge, who left the band most recently in 2015) it was still culturally relevant — this was during the peak of the Area 51 meme. Yet the obvious humor in which Blink-182 performed it — they brought in floating green alien heads — signaled their brushing-off of their old band member’s current UFO obsession. (A few years ago, DeLonge co-founded a UFO research group called To the Stars Academy of Arts and Sciences — TTSA for short.)

READ: Review – Blink-182 Gave Fans Everything They Wanted Plus A Little Bit Extra

Less and less of us are laughing now, through — on September 18, the navy confirmed that three of TTSA’s videos show “unidentified aerial phenomena.” Before his rendition of “Aliens Exist”, DeLonge announced, “To all those people who thought I was crazy, this song is for them.” 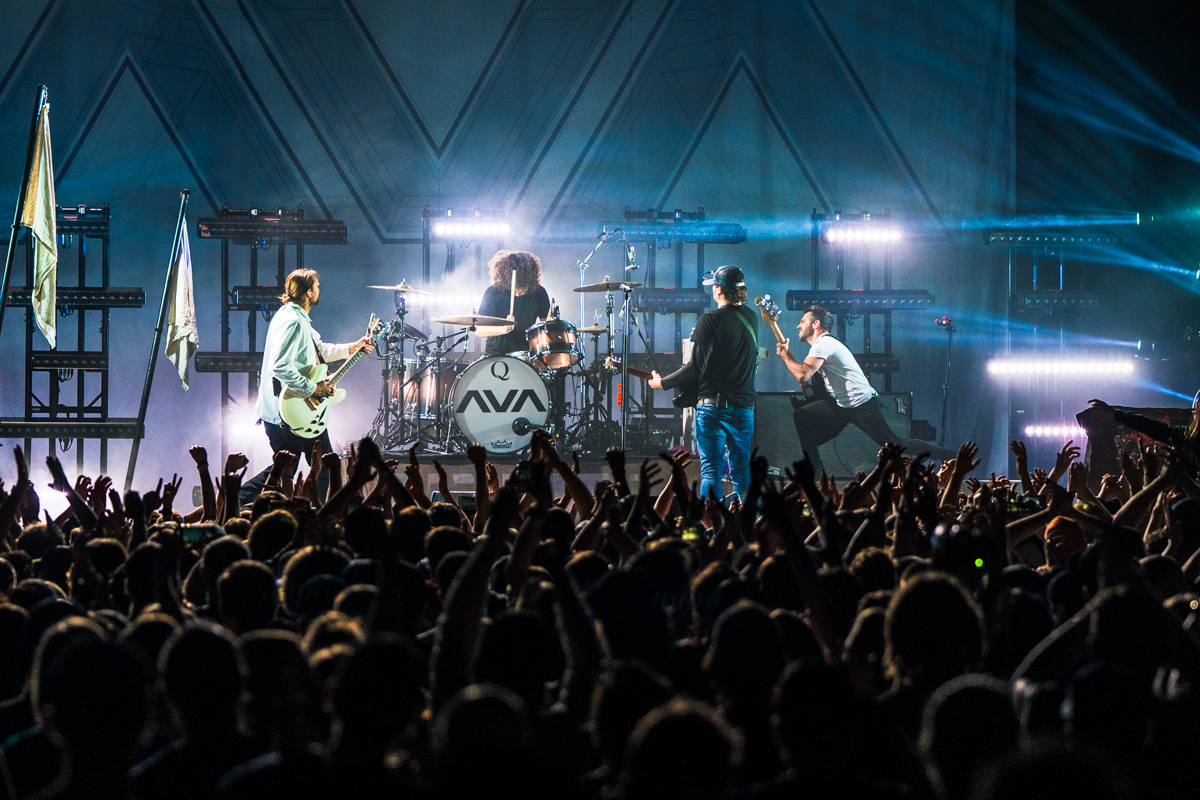 Still, the evening predominantly exuded optimism and humor. (Who could help but laugh when DeLonge and Rubin performed “Anomaly” as a romantic duet?) The band’s disembodied invitation to participate in a human experience called humanity — which broadcasted just before the encore — was accepted by the audience with ardor. For many, the lyrics of the night’s final song, “Heaven”, rung true — “heaven might be just like this.”

All photos by Daniel Amimoto unless stated otherwise.