Throughout history, artists have always detected symptoms of social disease and attempted to bring it to the attention of the rest of humanity. It’s a daunting task that requires keen foresight and some intuition, but the weight of seeing the disease and doing nothing to cure it is too much to bear. Such is the case with Jessica Forrestal — a Colorado-based artist who recently completed a residency at Denver’s Platteforum and who uses black and white immersive murals to recontextualize our relationship with “stuff.”

On the surface, Forrestal’s work is playful and minimalist. She uses a matte black house paint to create large diagrams that take over walls, ceilings and floors. “Assembly diagrams are just hilarious — especially when taken out of context,” she mused. “But also it is a visual language that most consumers in the US have encountered.” In her murals, symbols found in those instructional booklets exist next to images in any clip art library, and tying them all together are lines and arrows. The high contrast style leads to a wow-factor when viewers first encounter her pieces. It is at once easy to understand and horribly confusing — just like putting together an IKEA couch at home. 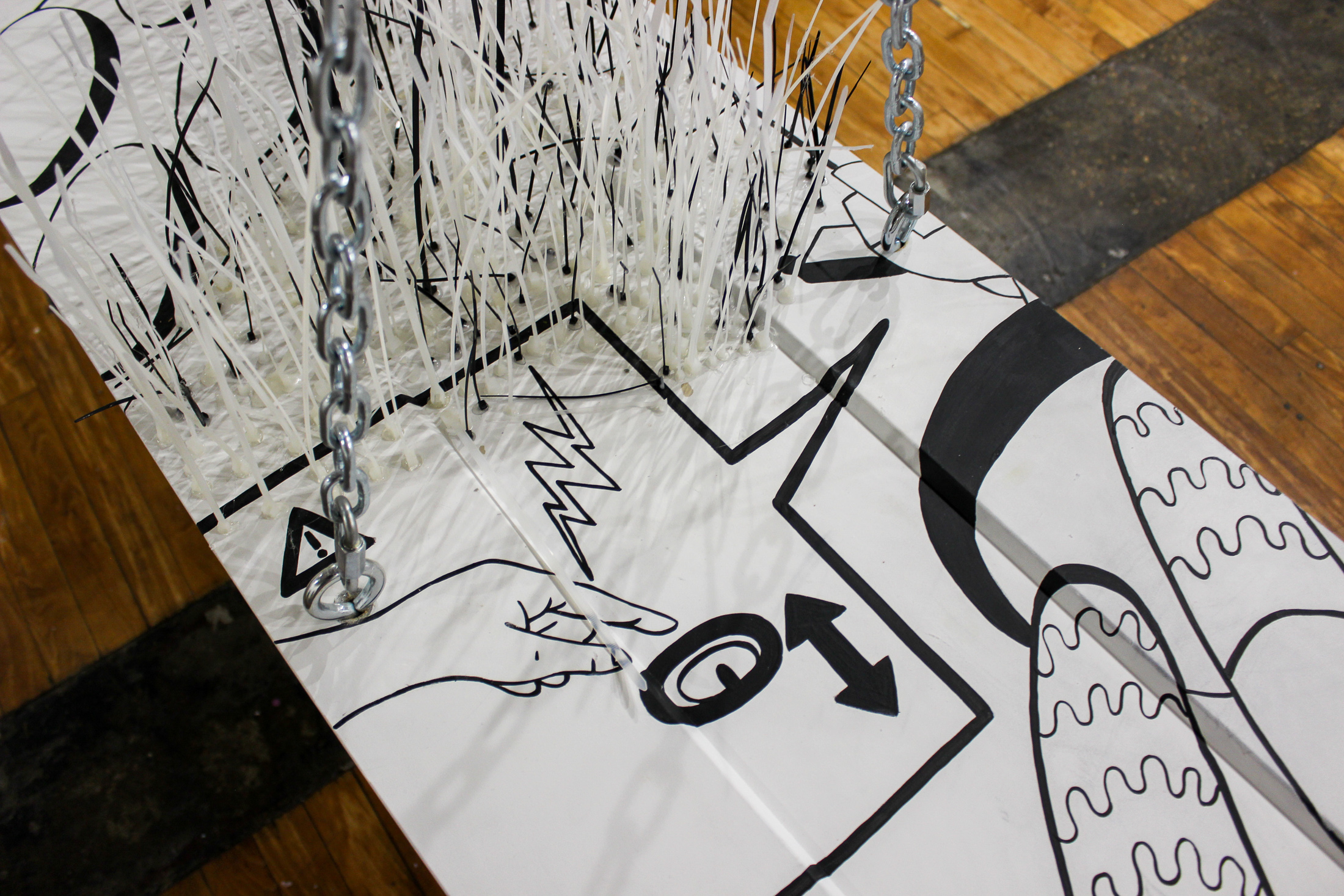 But, like any artist who reads between the lines, Forrestal doesn’t want the impact of her art to stop there. That’s when the playful and minimalist demeanor makes way for a more sinister attitude. In these zany diagrams that Forrestal paints, one can find a polished critique about consumerism, mass production, never-ending consumption and the corporations who puppeteer the whole disgusting dance.

“Manufacturers don’t even make the entire product anymore! We think we are getting a sweet deal on that new bookshelf at 30%, meanwhile, the manufacturer saves money by handing the assembly labor over to the consumer. Six frustrating hours later you have a wonderfully low-quality bookshelf that will most likely fall apart or be tossed within the first five years,” Forrestal explained.  As companies like IKEA and Target spread their influence in the home design markets, more and more people feed into Forrestal’s worries. “Mass production and mass consumption — that is the name of the game. The assembly diagram is a symptom of a larger issue.”

Her residency at Platteforum this summer allowed her the freedom to transform an entire room using those ideas to create the show called Mechanical Voids. “While the work comes from a fairly serious conceptual place, I hope viewers also get a sense of wonderment from reexamining these objects they come into contact with every day,” Forrestal explained. “I work to humanize these objects, give them personality and sometimes a sense of humor. Can there be a way in which we move forward together as ‘humans and objects’ rather than ‘humans with their objects?’ I hope viewers walk away with the ability to look at something in their daily life in a different manner.”

She painted on all surfaces, as has become one of her specialties, and also included sculptures made with the help of ArtLab interns. The ArtLab program operates year-round, offering instructional programs to 15 underserved high schoolers in fields related to the arts.

“Both the most challenging and most rewarding aspect was working collaboratively with the ArtLab interns,” said Forrestal. “Like many artists, my practice can get pretty solitary at times. This was a great challenge to bring others into my practice and to allow for their ideas to influence the direction of the installation. Allowing space for the interns to have a voice in sculptural elements required that I relinquish some of the control I had over my work. It changed the pace at which I worked, the order in which I did things, and overall just shook things up — and I needed a good shaking.”

Years ago, Forrestal worked with sculpture frequently but in the last four, she’s moved almost exclusively to murals. Mechanical Voids allowed her to fully embrace both mediums, intertwining them into a tangled but also hyper-organized setup that showcases her style to the fullest. It also adds to the immersive elements of her work. Without sculpture, Forrestal is able to steer visitors visually through a space, especially when she paints shadows or other components on the floor. But with sculpture, she’s able to take over a space and make the visitor feel engulfed when they walk in. 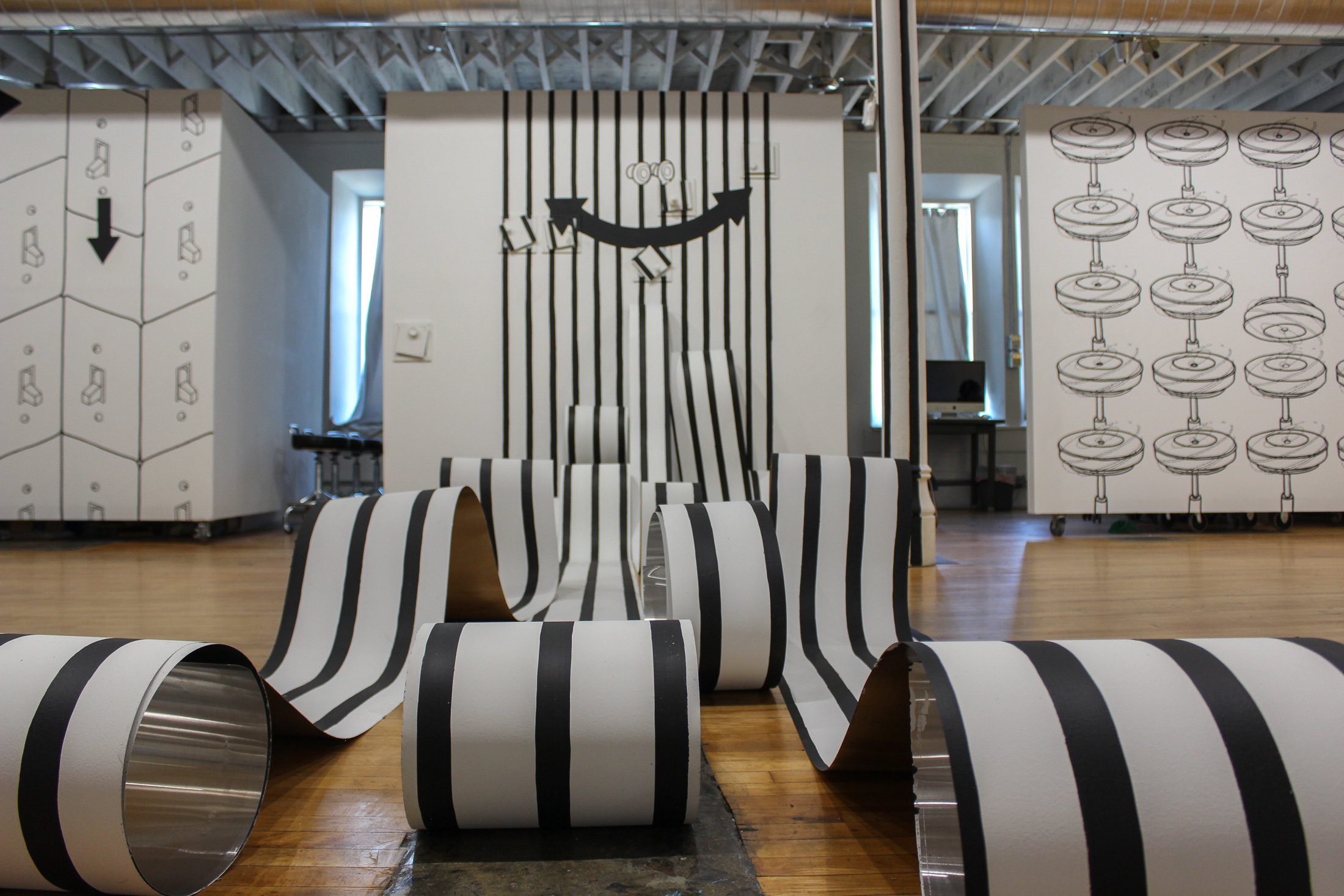 Throughout Mechanical Voids, visitors will find an odd assortment of objects — drawers attached to the wall, rolls of aluminum, a bench filled with zip ties, a roller cart with a surprise underneath. These objects anchor the show in a way that her mural work sometimes lacks, forcing the viewer to approach the exhibit from many different angles. In their isolation from their normally useful purposes, the objects speak to the “some assembly required” philosophy that Forrestal denounces.

“I am fascinated by what objects we as a society covet,” said Forrestal. “We must have the latest and greatest for fear of seeming disconnected or out of touch with contemporary American society. We are creating a massive amount of waste in our wake of consumption and I am curious about how we will learn to live with our ‘trash.’ I think a lot about this with my diagrammatic drawings — these objects taking on new life and changing the earth’s geology.”

Stepping into Mechanical Voids as a viewer does exactly what Forrestal hoped it would do — it transports the viewer into a hopelessly confusing life-sized instructional diagram. Around each corner is a new set of instructions, a different set of symbols and at the end, you’re not sure if you assembled it all in the correct order.

Mechanical Voids is on view until September 7, 2019. Platteforum is located at 2400 Curtis Street and is open Tuesday through Thursday from 12 to 4 p.m. or by appointment.