In-N-Out has announced its plans to open a restaurant in Lone Tree near the Park Meadows Mall in late 2020. Business Den was able to get the now public plans for the California burger chain.

The restaurant will be the first of the popular chain in the Denver metro area, giving Denverites a chance to dive into some savory Animal-Style fries, burgers and more that have made the chain ever-so-famous.

In 2017, In-N-Out announced plans to expand in Colorado by building a 100,000-square-foot distribution facility in Colorado Springs. According to the Denver Post, the facility will support up to 50 restaurants within a 350-mile radius – so the news of the restaurant plans are no surprise. 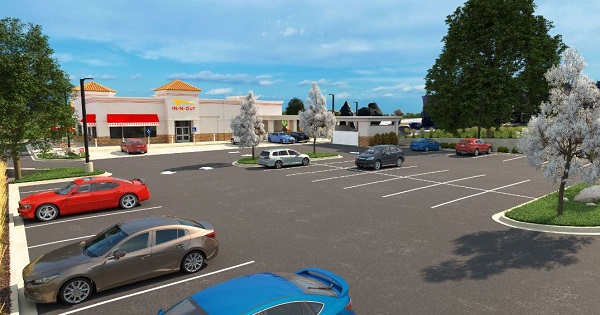 A rendering of the Lone Tree In-N-Out restaurant. Courtesy of Business Den.

According to Business Den, the proposed location is listed at 9171 Westview Road in Lone Tree which now holds a Suds Factory Carwash & Detail and a Conoco fueling station. These will be demolished to make way for the 3,867 square-foot restaurant. The restaurant would also include a 1,300 square-foot patio, a drive-through that would accommodate up to 26 cars and onsite parking for 47 in-store diners.

There would be a six-month construction timeline that would begin as soon as they are approved by the city.