AMZY has been making their home in the Denver music scene since 2005. Known for their energetic, pool raft-filled live shows, the modern rock band has shared the stage with artists like Bastille, MisterWives and Atlas Genius. Most recently, AMZY had the honor of kicking off the first Grandoozy Festival 2018 in September. After meeting in high school, frontman Brennan Johnson and guitarist Sean Grant created the band. Drummer Wes Barton became a part of AMZY after answering a dubious Craigslist ad the band posted. The chemistry between the three is a large part of what makes the band so loveable, in addition to their hits like “5 to Midnight” and the unapologetic “Sorry Not Sorry.” 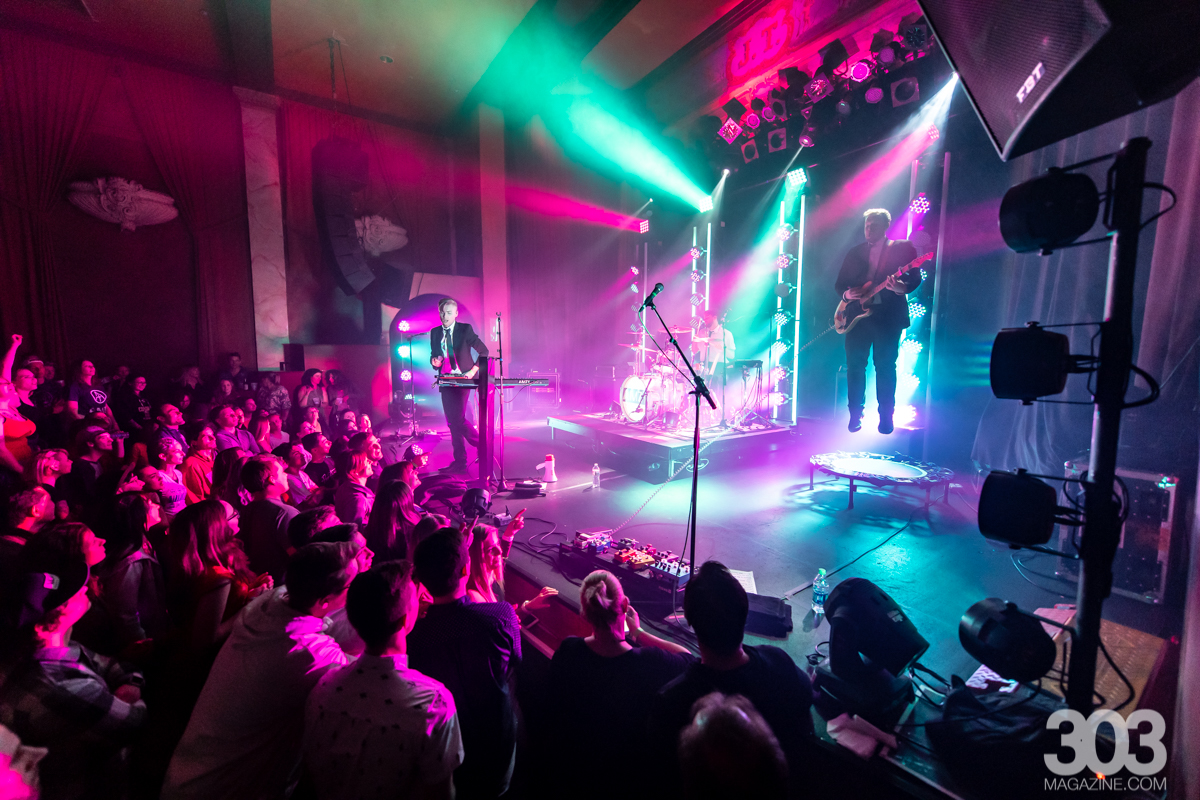 By the time AMZY hit the stage at Marquis Theater on Saturday night, the temperature in the room was beyond hot. Timothy Jayy, Silver & Gold and Ten Miles South spent the beginning of the night warming everyone up and despite the heat, the crowd was still energetic, wanting more. Despite some technical difficulties at the beginning of their set, the vibe in the room felt celebratory. It was almost as if everyone could predict what was coming when Johnson – publicly coming out for the first time – got down on one knee in the middle of an acoustic rendition of “Time to Change” to propose to his boyfriend, Trevor McIntosh.

“So, this song has a lot of meaning for me,” Johnson said. “ When I wrote it, I was kind of lost. Before this, I didn’t know what was gonna happen. I didn’t really have a purpose. And then, I met somebody and they told me, ‘I believe in you. You can do something like, be in a band or write songs. I think you can really change.” So, I wrote this song and I wrote it for somebody who’s always gonna believe in me.”

Bringing McIntosh into the center of the room with him, Johnson said, “You’ve been making me happy for so long and let’s just keep doing this,” before presenting a ring and asking McIntosh to marry him. As the audience screamed their support, a clearly emotional McIntosh said the word everyone was waiting to hear – yes.

After the show, 303 Magazine sat down with the newly-engaged Brennan Johnson to talk about his fiancé, the journey to their engagement and how their love story influences AMZY’s music.

303 Magazine: First of all, congratulations on your engagement!

303: Brennan, how does it feel to have finally come out to the public, especially in such a loving way?

BJ: I mean, it felt scary in the time leading up to it. The good news is that I looked out and saw so many fans and familiar faces – I knew that everyone was supportive. I thought, “It’s time to take a leap.” I wasn’t in the closet, but just out to the people that were close to me. It’s not something I ever talked about on stage or mentioned. This was a bigger moment because it was a proposal – it’s the announcement of love and I wanted to do that.

303: How did you and Trevor meet and how long have you known each other?

BJ: We’ve been together for more than eight years. We met when I was working at a restaurant-bar that’s now closed. Trevor – my fiancé Trevor McIntosh – he was working an event, helping out, coordinating everything. There was a moment where I walked by a corridor and I locked eyes with him. I was holding towels and I coincidentally fumbled them and had that “ahhh” moment. I just thought that was it – I just had that weird moment and I thought, “Who’s that guy?” I ended my shift, went over to a bar across the street and lo and behold, he was there. 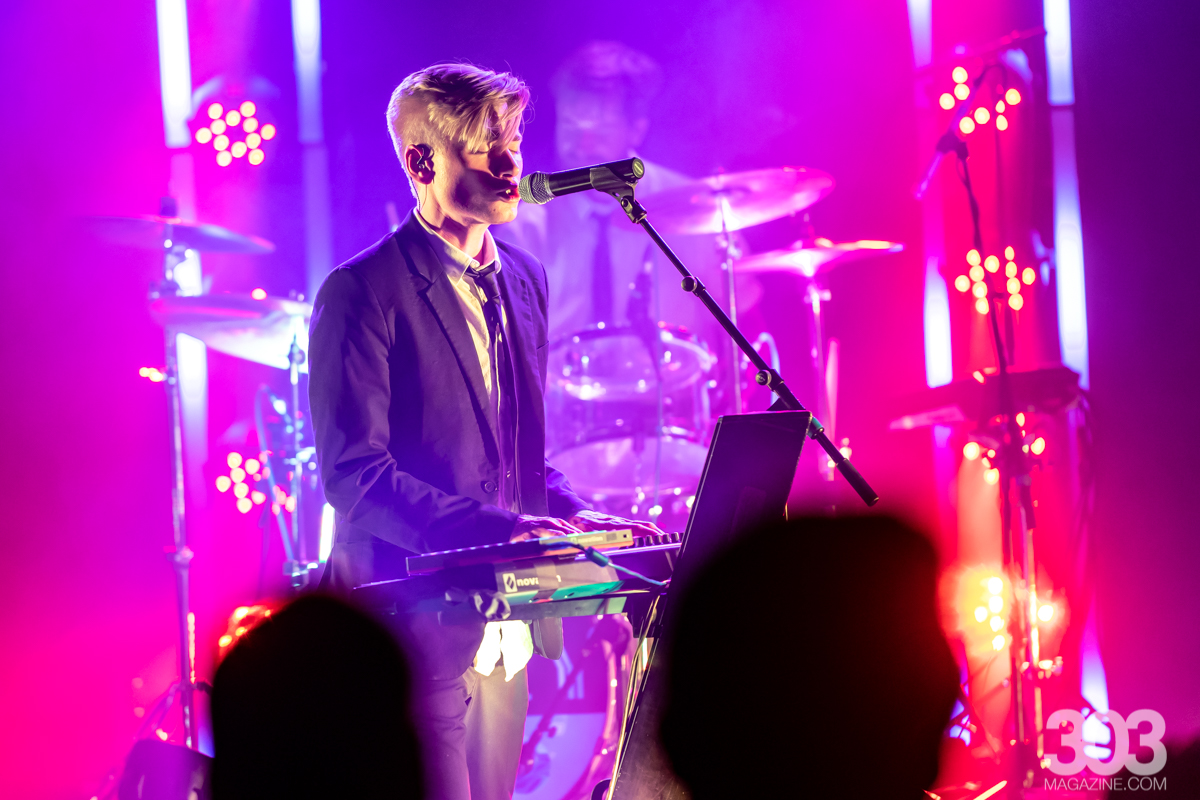 303: What was your first impression of him?

BJ: Well, handsome. Sort of definitely, probably an unhealthy infatuation right off the bat, you know? He just seemed like a different person when we locked eyes. And then it was – not even saying a single word to him – I knew that he had a light that just… I felt it from the get-go. I’m just so glad that light is in my life.

303: Has your relationship inspired a lot of your music?

BJ: I’d say it has. I guess – parts of it – I kind of put something together. Usually, with a lot of the lyrics, I don’t talk about where they come from. There’s always a part of me in them but then I just want to go through my head and create a story that’s kind of like a story I’ve been through or somebody I’ve talked to, friends, family. It all comes from someplace and I just try to make that into the song. The song that I proposed to him with is 100% about him, though. That’s definitely the one. It’s always been a song that I’d sing to him and that he really holds dear to his heart as well. It just felt like the right song to do this.

303: Have you been planning the engagement for a while?

BJ: Yeah, I would say so. I just didn’t know what the moment was. I had everything set up, I had the ring, everything. I just felt like, well, I’ve never been fully out, over the top. It’s a part of my identity that I really hold dear but at the same time, there are so many other facets of my personality. But he’s been with me since the very beginning of AMZY so I wanted to make it not only special but to show him, “You are something that never needs to be hidden. We haven’t hidden. But it’s time we take this to the next level.”

303: Were your band mates in on it? Did they have any advice for you when you told them how you were going to propose?

BJ: It was mostly just, “Hell yes, yes absolutely do this. This makes a lot of sense. We’re so happy for you.” 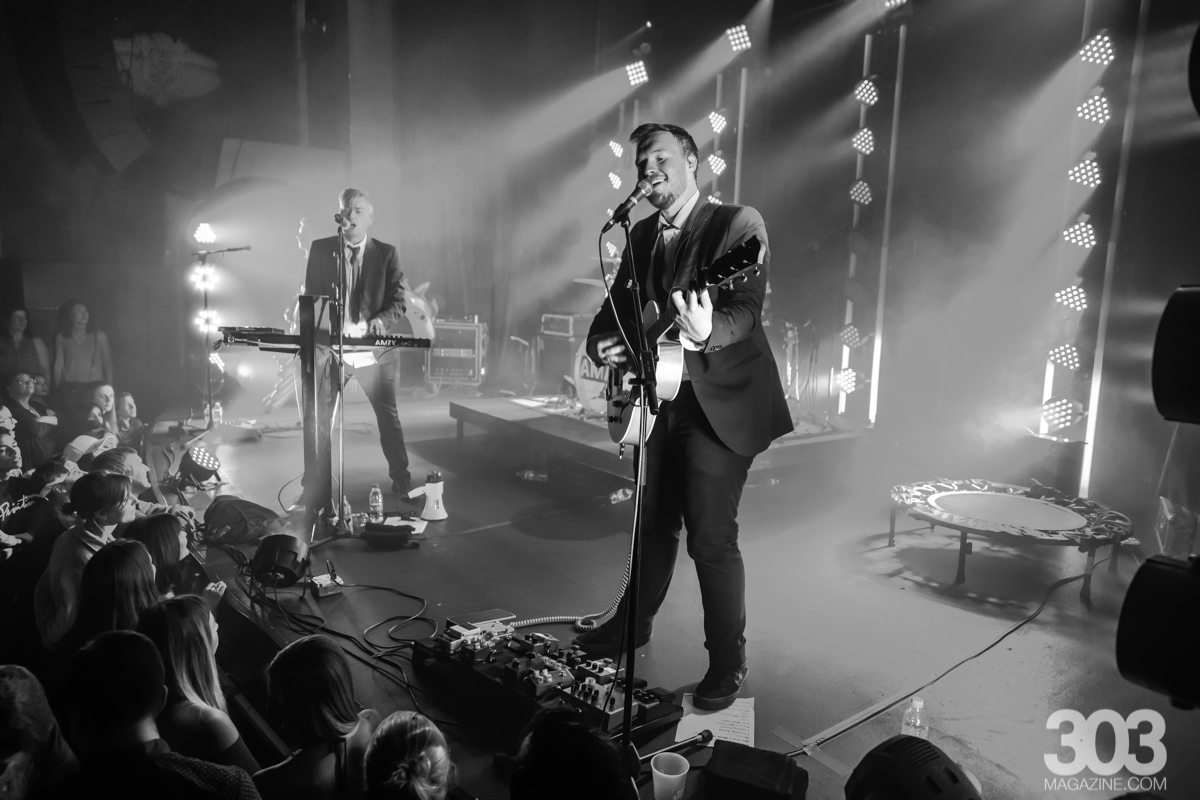 303: You talk about how empathy comes first in your music. What do you hope audiences take home with them after watching an AMZY show?

BJ: Well, our goal is to show that there is a source to a lot of the music and the emotion that comes out of it. What I hope everyone can take away from this is just to have empathy but to understand the different lives of other people. They don’t have to be the same as yours. Just make sure that you’re kind, caring, compassionate, respectful, understanding. Everybody has a story that’s a lot longer than they usually share. There’s a lot of ups and there’s a lot of downs – just remember that when you’re listening to our music or going out into the world.

303: You guys also talk about an on-stage journey of self-discovery and finding happiness. Has the process of creating and performing music held any significance to your journey leading to this moment tonight?

BJ: Yeah, there’s definitely quite a few moments in songs that we’ve written where I was still going through a lot of struggles. It can be a light switch sort of moment in terms of everybody knowing, coming from everybody not knowing. But this was a lot longer of a journey to get here. It’s definitely in the music – I don’t want to point to specific things. As much as I try to express through a lot of the lyrics, I don’t want to be sad. I don’t know, I want everybody to feel the songs themselves rather than me just saying, “This is my story.” But I have definitely included it in a lot of songs.

303: Aside from getting married, what’s coming next that you’re most excited about as a couple?

BJ: We have a house together – we’ve moved towards joining our lives and living together and being happy. I want to start at just the first foundation which is caring about each other, helping each other through our lives, finding happiness and then working on taking the next steps. So, I’m just happy to take it slow, to take any step in any direction. I’m just glad I’m taking it with him.