Murals come in all shapes and sizes, but it’s rare to find one that is alive. A “living wall,” as it’s named, is composed of thousands of individual plants that, when placed strategically together, form a design or aesthetic and continue to change throughout the seasons. Though Denver is home to hundreds of painted murals, there is an enormous living mural that is worth a trip away from the alleys to see. It’s found inside Fiddler’s Green — the music venue tucked away in Greenwood Village — and is organized by the Museum of Outdoor Arts (MOA).

It’s more than “seeing” when you visit the living mural — it’s also about experiencing the smells and life that buzzes and flies around the plants. The mural is actually composed of four separate parts in the four corners of the amphitheater, which altogether fit into a single theme. Each part is then broken down further into individual panels that are attached to the sound barrier wall with special brackets.

The entire display consists of 35,000 plants. And yes, it seems like that many when you’re surrounded by them. There are begonias and petunias, sage and succulents, peonies and many more species that allow for variation in color, height, density and texture. Changes are made each year since the project started in 2014, from the big overhauls like the overall design to smaller tweaks like switching out plants that didn’t prosper the previous year. During the winter, the thousands of plants needed to create the mural grow in greenhouses.

Schuyler Madden is the project director for the living murals, and also the son of the founders of MOA and Fiddler’s Green. This year is his 37th season at the amphitheater, and his fifth coordinating the project. His direction has led to a few changes in the last five years, including transferring from a nursery and designer in California (Rana Creek) to one in Colorado — Hardy Boy plants at Welby Gardens. He spoke fondly about how his father had a vision for Fiddler’s Green that included useful and beautiful landscaping, as well as an eye for artful design. Madden continues with that charge, under the guidance of his mother and the executive director of MOA, Cynthia Madden Leitner.

Originally, Fiddler’s Green was built as a large scale earth sculpture, with rolling hills and a view of the Rocky Mountains. The rolling hills and view remain to this day, although the stage and seats have been added since the initial construction. 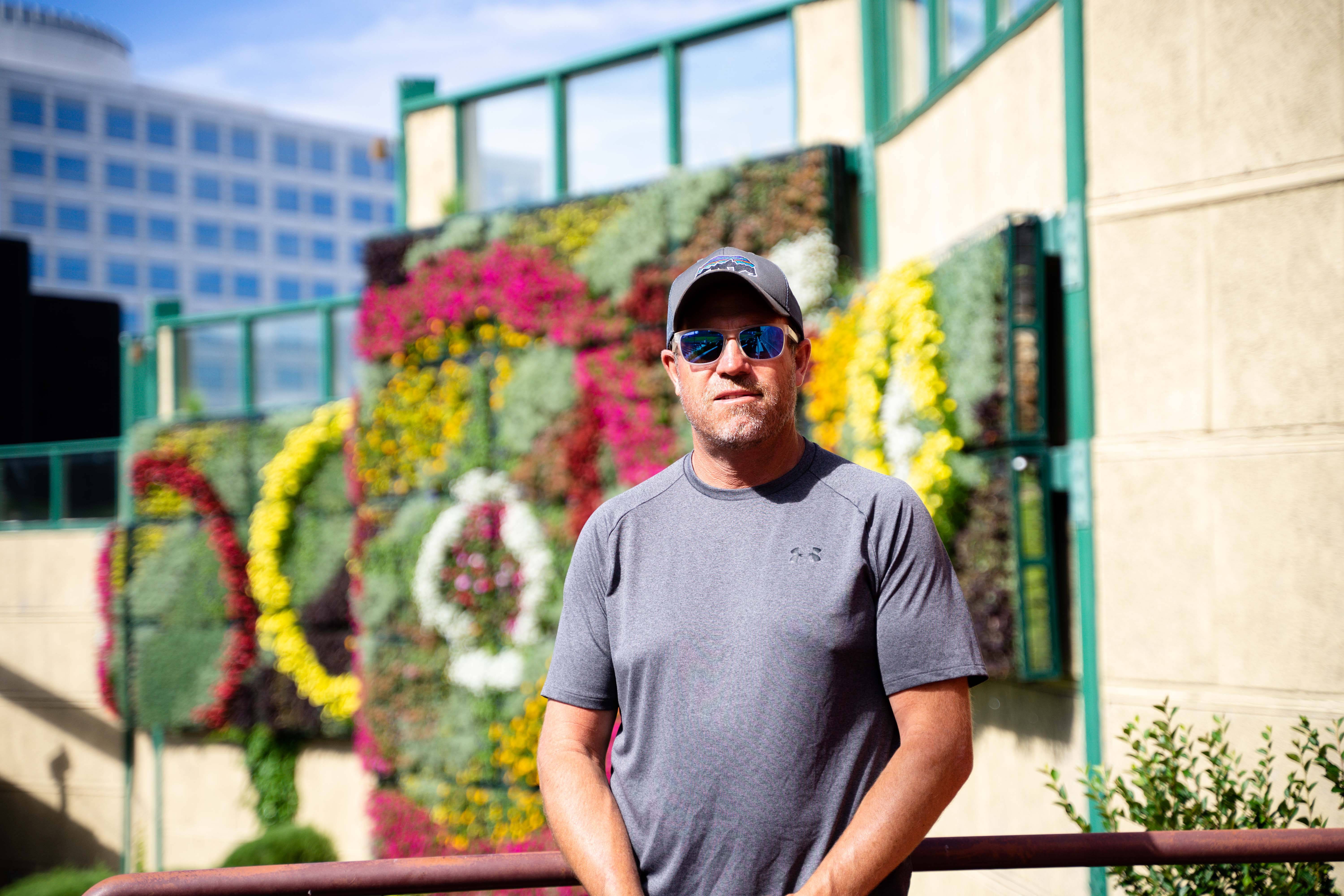 “People don’t know about our living murals,” Madden explained. “I sometimes like to stand under the doorway [during daytime concerts] just to listen to people’s reactions when they notice it.”

This project is not your average landscape job. Madden works with a core team of about six people who are in charge of the plant species, the design, the coordination and the watering schedule. When installation time comes around, the team doubles to 12 in order to complete everything within three weeks. A special scaffold is constructed and lift power is taken advantage of in order to reach the heights of the wall with precision. Each panel of the mural is held into place with a gabion cage that is filled with soil and fabric to hold it all together. The plants are inserted into the cells of the cages (the cells measure about four by four inches). As the summer season ticks away, the murals fill out with blooming and thriving plants and the design evolves with each new bud and leaf.

Living walls are inherently complicated at first, but then they can become less high maintenance as time goes on. Some designers aim to create perennial walls that withstand the seasons without needing to re-plant. The walls inside Fiddler’s Green aren’t quite low maintenance yet, but Madden is going in that direction. For instance, after a few years of unsuccessful walls (2014 and 2015, mainly) he started using an outside contractor (Joe Kissel) to water the plants — using a computer system that monitors moisture levels as well as fertilizer feeding. Madden already has plans to tweak the installation again in 2020 but is bringing on a fresh mind to the task — a professor at Colorado State University teaching a Masters class on Living Walls and Roofs.

“We don’t trim or do much maintenance once it’s up,” Madden reported. “I think birds come and take all of the dead flowers because we don’t do anything during the season. Once in a while, we have to take out grasses that come in with the wind or with those birds, but for the most part, our plants are healthy and fight off weeds.” He added that the birds and other animals take care of a good portion of the dead branches and plants after the murals rot and dry out during the winter months and before the spring re-planting begins. For as much work as it is, the ecological benefit it provides in the middle of the urban environment of the Denver Tech Center is truly remarkable.

Every year on the planting day during installation, the 12-person team is greeted by a cloud of bees. Madden believes it’s the same colony which comes back each year knowing the flowers will be ready for them. “Last year and this year, they came on the same exact day. I know because I took a video on both instances,” Madden commented. His reaction is welcoming, pensive and a little protective. “We’re doing it for people to enjoy, not necessarily to save something like the Monarch Butterfly. But it’s cool when you’re in here and you see the hummingbirds and bees and birds interacting with the flowers.”

This living mural may not be considered street art, like the rest of Denver’s murals, but it’s something that we should consider including in the public sphere more often. The intersection of human creativity and natural perseverance gives the walls around the music venue more life — literally, with the plants, and also figuratively, as art should always aim to do. After all, it’s lovely to look at, it’s colorful and crafty and it brings nature into the city. 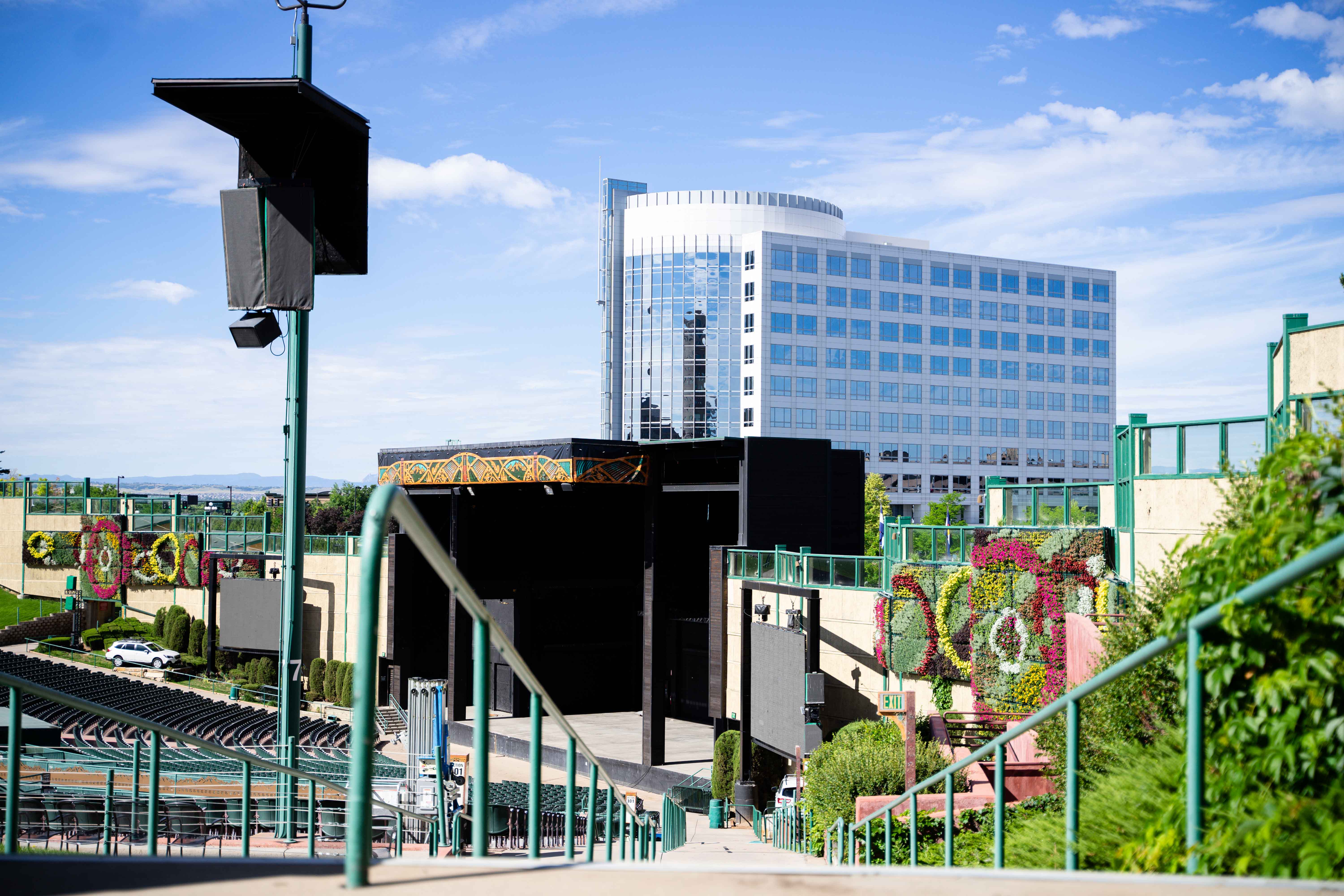 Fiddler’s Green is located at 6350 Glenwood Plaza Boulevard. You can see the living murals if you have a ticket for a daytime concert, or you can schedule a tour during an off-day, by contacting [email protected]

All photography by Lauren Magin, unless otherwise noted.