Red Rocks Is About To Get Weird for “Weird Al” Yankovic

Colorado’s favorite outdoor venue is preparing for one of the funniest shows of the summer – and quite possibly the silliest to ever occur in the history of the venue. Now in his fourth decade as a pop culture icon, “Weird Al” Yankovic will make his Red Red Rocks debut alongside the Colorado Symphony, much to the delight of his fans. In honor of this milestone event, Fest of Al will host their annual party at Red Rocks just hours before the show – and for any fans out there looking for an extra chance to get weird, this is one party you won’t want to miss.

There’s a lot to love about “Weird Al” Yankovic. He’s parodied some of our favorite songs, everything from “I Love Rock N Roll” to “Ridin Dirty.” He dominated our television’s in the ’90s with specials and his own Saturday morning show, The Weird Al Show, not to mention his countless features on shows like The Simpsons. He even developed a cult-like following for his feature film UHF, which just celebrated it’s 30th birthday last week. Obviously, “Weird Al” Yankovic was born to perform – and he’s damn good at it. So it comes as no surprise that his fans are beyond excited to see him perform alongside the Colorado Symphony Thursday night.

When it comes time for a show this big, it’s only natural that Weird Al’s fans would call for a celebration – and that’s exactly what Fest of Al plans to deliver. Any Colorado concert-goer knows that a show at Red Rocks simply isn’t complete without a little tailgating, and Weird Al’s appearance at the venue will be no exception. The party kicks off on Thursday afternoon, just a few hours before doors open for the show, giving fans an extra opportunity to celebrate their favorite musical comedian. Fest of Al will provide food, music and an all-around good time – making it the perfect chance for fans to get a little extra weird before the show begins.

No tailgate would be complete without a good old fashioned barbeque – and in Weird Al’s honor, Fest of Al will serve up Twinkie Weiner sandwiches, a favorite from his cult film UHF. Die-hard Weird Al fans might know that he’s a vegetarian, so don’t worry, there will be plenty of vegetarian fare too. However, the event will be more than just a chance to eat unique Weird Al inspired food. There’s An Ape For That will also be spinning records before tossing them out into the crowd. Fans will even have an opportunity to commemorate the whole event by taking photos in a themed photo booth. 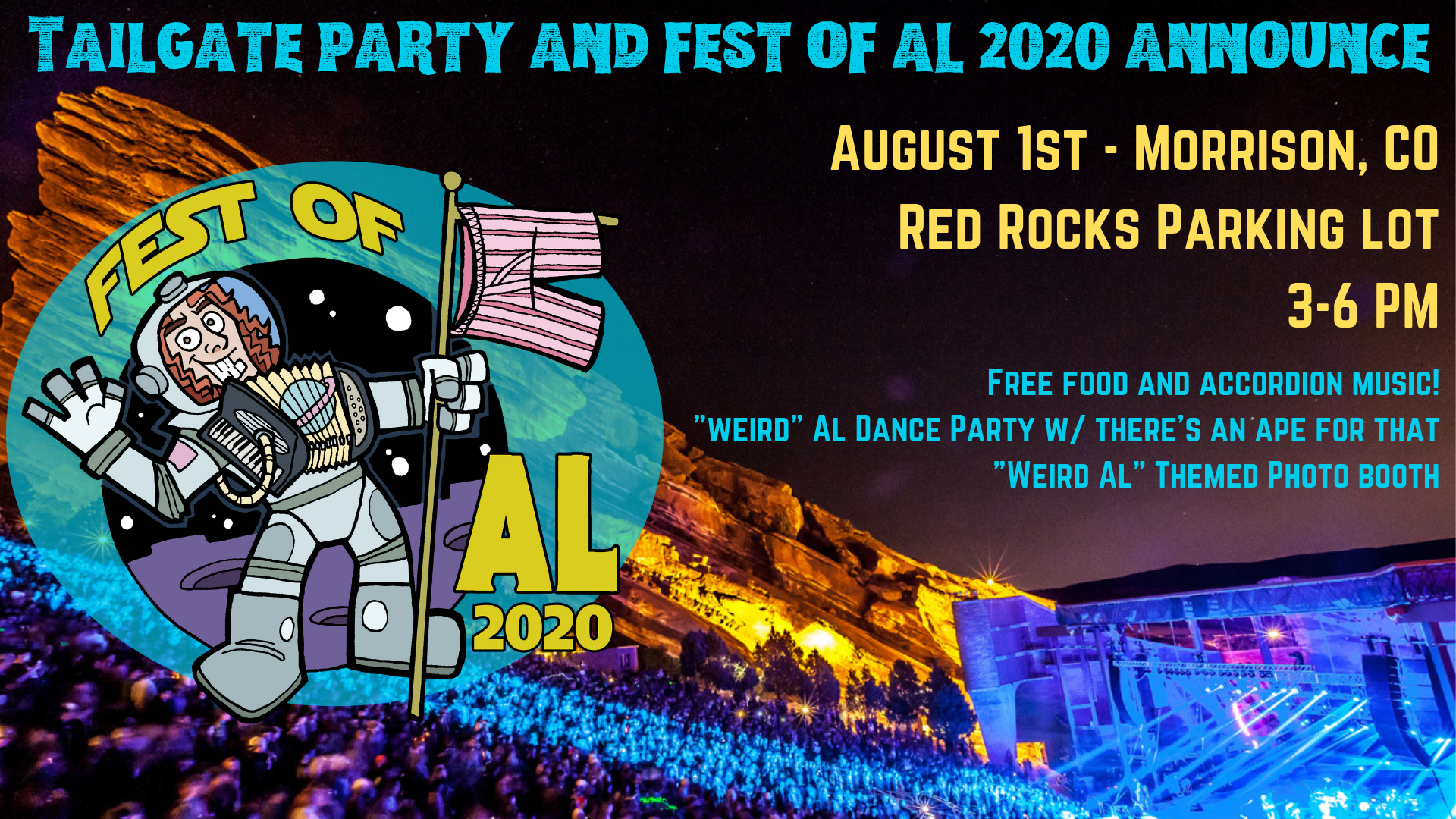 Photo Courtesy of Fest of Al

“We’re a community group dedicated to people who love comedy, parody music and most of all, “Weird” Al Yankovic. When we found out Al was going to be headlining Red Rocks with the Colorado Symphony – we knew it was the best way to announce where and when the fest will be next year,” said operations manager Cassie Cowan in a statement. Whether you’ve been a fan since the beginning, or just a casual fan who wants to have a good time, Fest of Al is sure to be a delight for anyone who chooses to attend.

Though the event is free, Fest of Al recommends that attendees RSVP by midnight July 31 in order to receive information about the exact location of the event. Fans interested in attending can RSVP here. Tickets for his performance at Red Rocks Thursday night can be found on the AXS website.