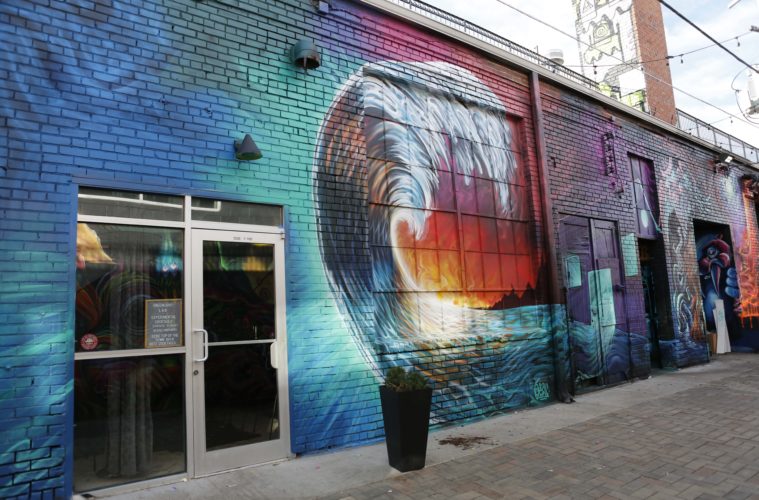 Starting the first week of September, CRUSH WALLS will once again turn the RiNo Art District into an open-air art gallery, where local and visiting artists will leave their mark over a 30-block radius in Denver. This year is even more special because it marks a decade for the festival, which started as a grassroots graffiti-focused event, and proves just how inspirational it has been for the entire city. Last year alone, CRUSH commissioned more than 80 murals that were completed in one week. Not only does this make the impact of CRUSH felt in the RiNo neighborhood, but it’s also cast Denver as one of the top cultural destinations west of the Mississippi. 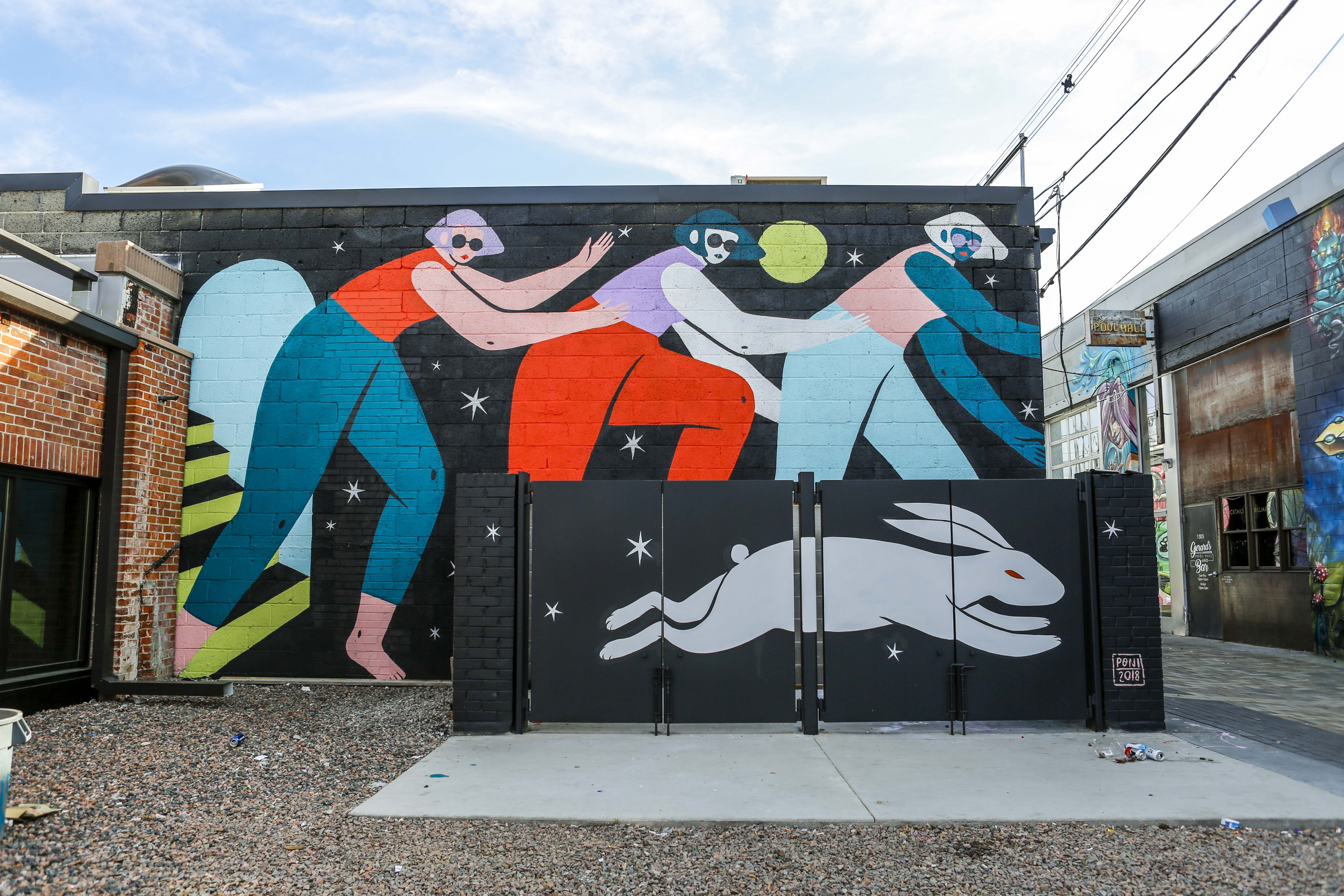 Although CRUSH started small, the evolution has been exponential since the addition of murals and street art (a broader term that encompasses murals, graffiti lettering, wheatpasting, stencils and even stickers) in 2013. Each year since it’s doubled in size — in terms of participating artists, the footprint of walls transformed and interested viewers. That is until it was capped last year, under new direction from Montreal-based Station 16 Gallery, in order to keep it relatable, approachable and curated. However, for 2019, local event production company Two Parts has been hired to help produce the festival this year instead, along with RiNo Art District and the original founders.

This desire to focus more on local talent and agencies might be due to the controversy over hosting famous street artist Shepard Fairey as a headliner last year, which alienated some of the Denver-based artists.

As a result, CRUSH is once again distilling its mission for the 10th anniversary, focusing on collaboration between artists and highlighting the local scene first and foremost. After receiving over 400 applications from interested Colorado-based artists, a CRUSH WALLS committee — made up of stakeholders, local artists, RiNo Art District representatives and CRUSH founder Robin Munro — selected 70.

“Our intention was to create a collaborative spirit with our visiting artists and have the local artists personally invite them to join us,” Munro said. In order to facilitate this vision, the invited artists were asked to team up with local Colorado artists to “level the playing field and create a more inclusive connection to the CRUSH WALLS event,” as the official press release stated.

“We’re excited to welcome the highest concentration of Colorado artists in one event… Denver has become an incubator for creative talent and the creative economy, and RiNo Art District is at the forefront of this movement,” RiNo Art District president Tracy Weil commented.

There are a lot of returning local artists, including the powerhouse names that have gained recognition beyond CRUSH, like Thomas “Detour” Evans, DINKC, Lindee Zimmer, Anthony Garcia Sr., Emit, Pharaoh One, Chad Bolsinger, KiriLeigh Jones, Nick Napoletano and Patrick Kane McGregor. These and many other Colorado-based artists on the roster are quickly becoming influential forces on the national street art scene. This year also marks a step in the right direction for CRUSH’s diversity portfolio, with more women involved than ever before. From Zimmer (founder and organizer of the Fort Collins Mural Project) to Jones (who just completed several murals in Boulder) to wheatpaste duo We Were Wild (made up of Meredith Feniak and Risa Friedman, who participated last year) to Anna Charney, Sandra Fettingis, Ladies Fancywork Society, Alexandrea Pangburn, Uc Sepia, Debbie Clapper, Miss Meeg and more — the list is certainly more inclusive.

As for the visiting or invited artists — there are some repeats, like Max Sansing who painted on RedLine Contemporary Art Center for CRUSH in 2017, Marka27 who painted the Denver Rock Drill for CRUSH in 2017 and Birdcap whose murals can be found sprinkled across Denver. But there are some other artists that Denver will get its first taste of — Mateus Bailon, RETNA, Adrian Avila, Sebastian Ascs, and Lo Lo YS.

Another invited artist is Jeroen Koolhaas, in collaboration with the Biennial of the Americas (which Denver is hosting in September). Koolhaas is a Dutch-based artist who gained recognition for his project in Brazil called Favela Paintings. He and another Dutch artist, Dre Urhahn (the duo is known as Haas&Hahn), enlisted the help of local people to paint their neighborhoods with bright colors. For the complete list of participating artists, visit the CRUSH website. 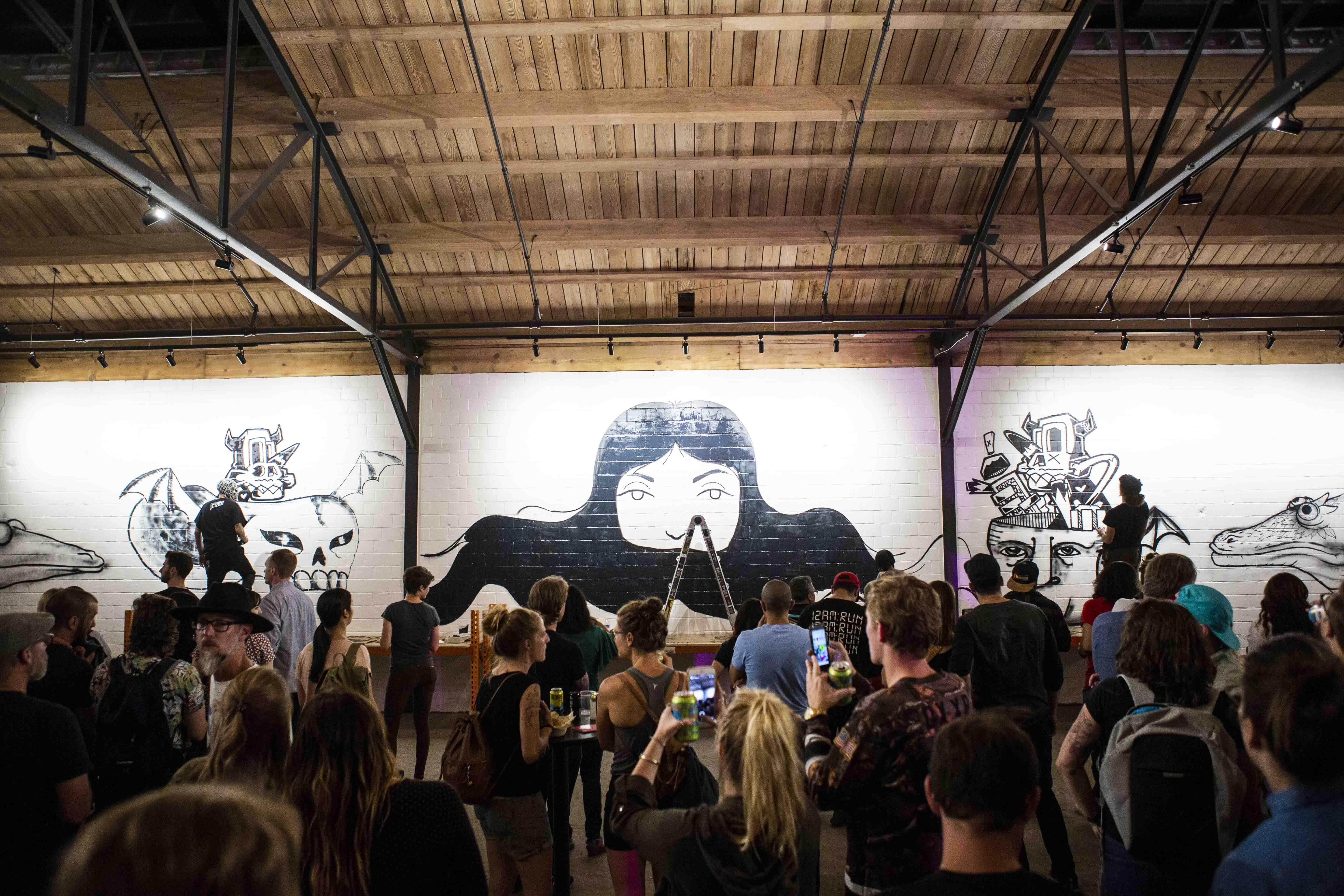 Something that will continue from last year is the myriad of programming to accompany the week-long painting activities. The national competition Secret Walls is returning on Friday, September 6, with the list of participating artists kept (you guessed it) secret until the day of the event. A block party will take over the Denver Central Market parking lot on Saturday, September 7 — a get together that hosted 1,500 people last year. There will be art talks, panels, workshops and guided tours (provided by artists and district volunteers). New this year is a CRUSH concert at the new Mission Ballroom on Sunday, September 8, where Grammy-winning Mexican rock star Natalia LaFourcade will headline.

Although it’s nearly two months away, the buzz about CRUSH is already steadily rising. And with the full list of artists and off-the-wall programming revealed, there’s something tangible for us to hold onto. Just make sure to take time to appreciate the murals in RiNo as they are now since the map of participating walls hasn’t been revealed yet.