Review – LANY Brought More than Just Music to the Fillmore

For most musicians, the music is everything — but not for LANY. For the California-based pop group, their art is about an experience, which includes both music and visuals. Their strong aesthetic combined with their synth-heavy brand of pop has captivated audiences throughout their young career. During the five years that the band has been together, they’ve gained a dedicated fan base. Many of those fans came out to see LANY when their world tour made a stop at the Fillmore on Monday night.

Pop singer Sasha Sloan kicked off the evening with a brief set, which fell surprisingly flat. Though attendees were still finding their way inside the venue throughout her set, the pit was still full of fans — many of whom knew her music and sang along to the songs she played. While Sloan’s vocals filled the room, her performance felt static. Hardly moving across the space, spending most of her time glued to her position center stage, Sloan failed to empower the crowd to really vibe to her music. However, for her fans in the audience, it didn’t matter. The concertgoers who did know her songs swayed and sang along, despite the audience members that talked throughout the set. 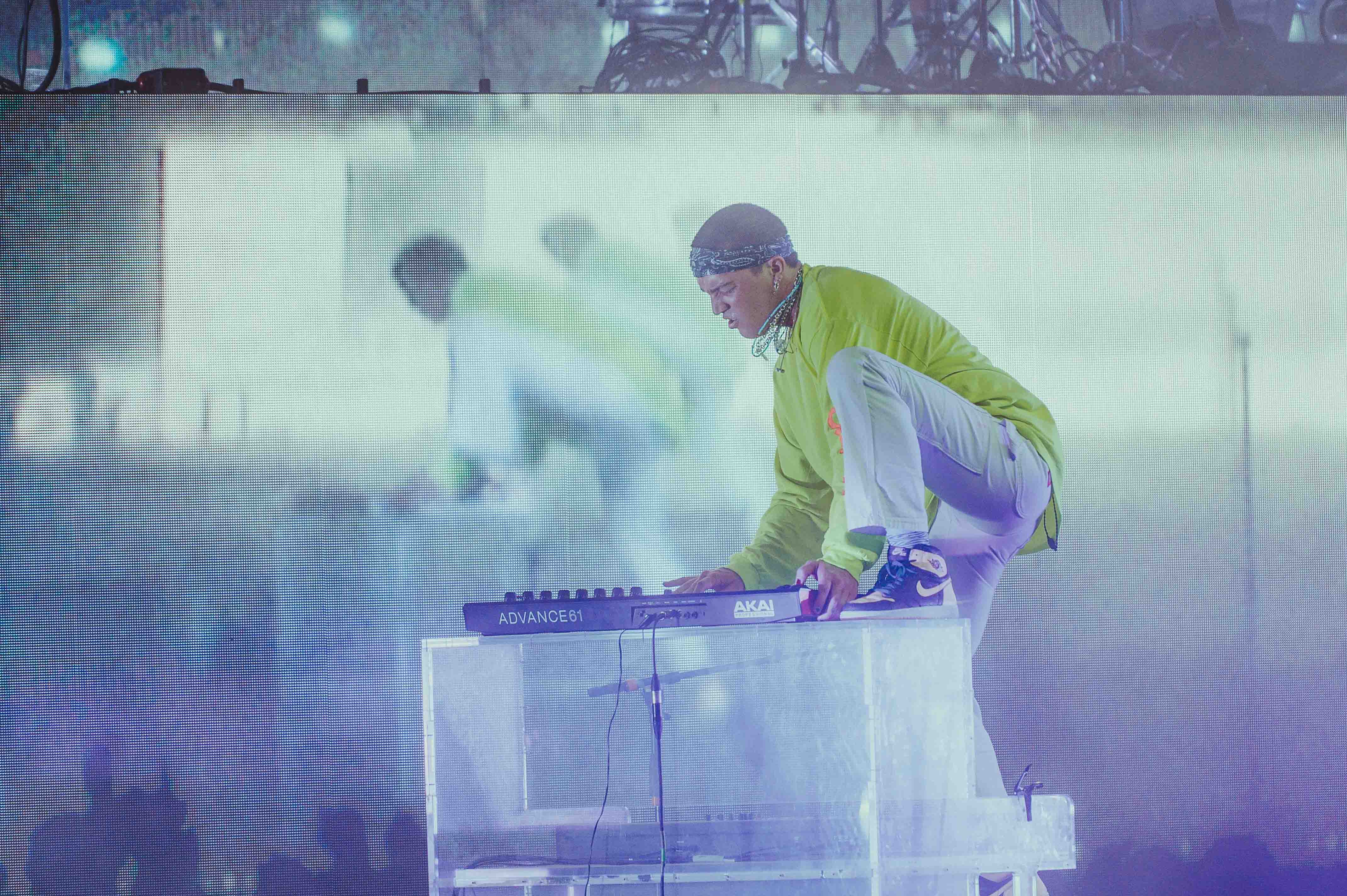 When LANY took the stage at 8:30 p.m., it was hard to imagine where any other fans could fit inside the venue — though there were still a few tickets left for sale at the box office. Before the group took the stage, the lights dimmed and people immediately began chanting as old TV static filled the screen behind the stage and a two-minute countdown began, causing one excited fan to lament that “it’s too long!” The band slowly emerged from the wings, finding their place on stage and launching into their first song, “Thick and Thin,” as the timer reached zero.

The countdown marked the beginning of a show that would be a full-on art exhibit rolled into a concert. Vocalist Paul Klein dressed the part, wearing a neon yellow shirt that read “Gallery Dept.” on the back. Throughout the show, the screen behind the band showed a mix of scenes carefully selected to accompany each song — from a photo slideshow to simple patterns that moved in time with the music. One song even showed the lyrics in karaoke style — however, the fans in attendance didn’t need any help remembering the lyrics to any of the songs LANY played that night. 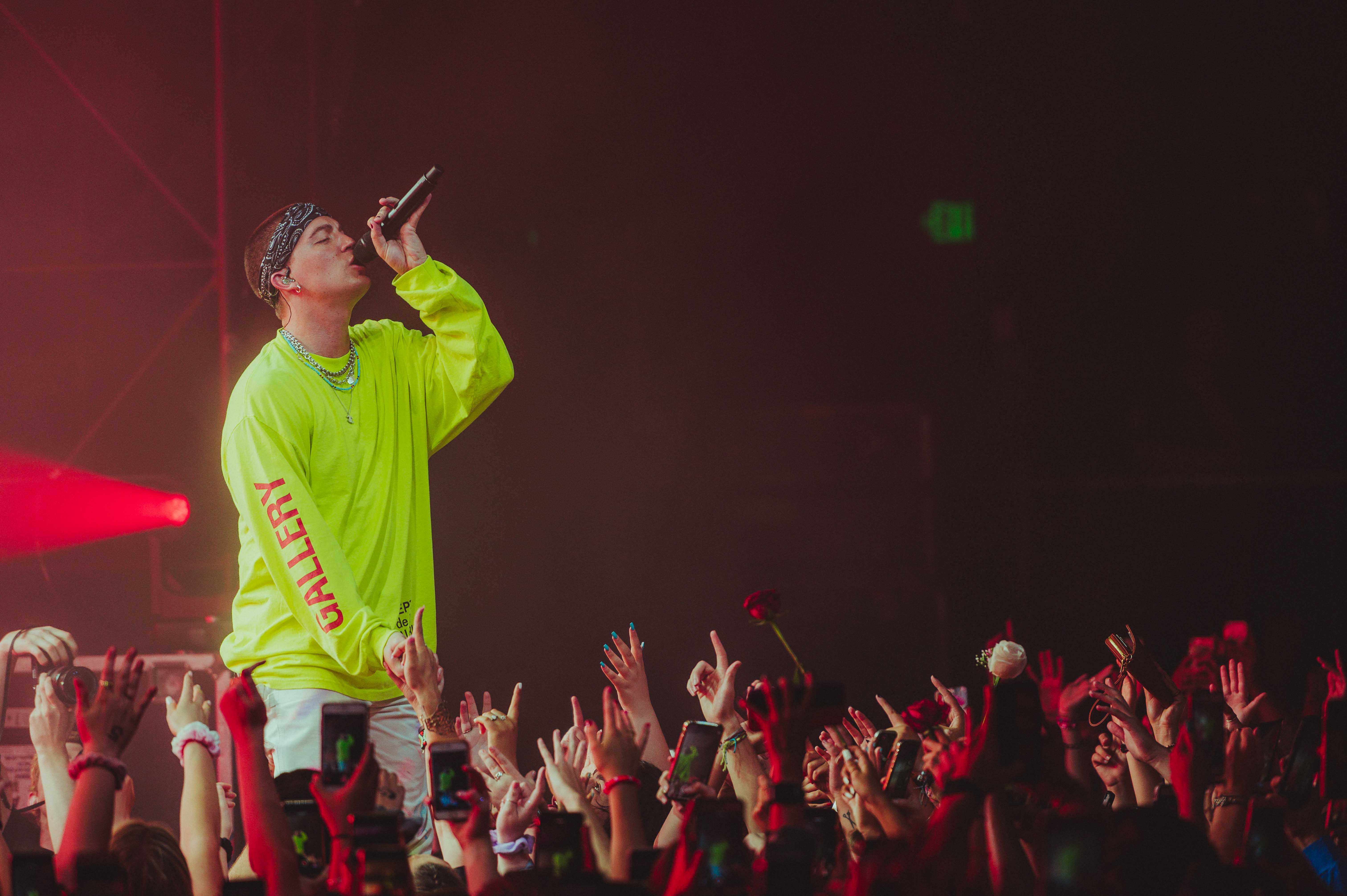 Though LANY is a young band, their fan base is dedicated. In fact, nearly every person in attendance sang every word to every song. Fans even threw roses onto the stage throughout the evening — an act which is so common at the bands shows that other venues on the tour have implemented rules about removing thorns from roses and how many can be thrown onto the stage at one time. Although they’ve received plenty of love in other cities, their show in Denver is one of the largest of the tour. “This is probably in the top 10 biggest rooms we’re playing on this tour,” said Klein.

Klein danced across the stage throughout the evening. Even when glued to the keyboard, Klein’s high energy performance kept the audience dancing along with him. Though he didn’t take many pauses to talk to fans, he kept the audience engaged. He praised their singing multiple times, saying “you sound so good.” It was clear that Denver loves LANY, and are loved right back. As the evening came to a close and the band took their place center stage for a final bow, fans passed items of clothing to the front of the stage in hopes of getting an autograph. Klein picked up sneakers and jackets and began signing personal items in clear disbelief. “Denver this is crazy,” Klein said with a grin “We love you. We’ll come back for the rest of our lives. We promise!”