Dispatch has been a staple in the Denver music scene for more than 20 years. They’ve been wowing fans at Red Rocks for almost half of their career and they’re returning to the iconic stage again this year. We got a chance to catch up with one of the band’s founding members, Brad Corrigan to talk about their return to Red Rocks and how the band gives back to their community.

303: Napster had a big hand in Dispatch’s initial success as a band, and you still offer a free download of your music on your website. What do you think about the dominance of streaming services in music now?

Brad Corrigan: We’re big fans of music flowing from peer to peer, you know? And I think mainstream media – as soon as you mix advertising dollars and politics into it, it’s not really so much fan driven and quality driven. It’s more, you know – it’s harder to say what pushes a song to the top or what pushes a song to mainstream media success. So free music, you know, the Napster era – there was a way for fans to share music directly via the internet. So it was kind of like an underground radio network, which was pretty exciting. I think it’s awesome that the valuing of music has returned in streaming. It’s great. I think the fans in large part were kinda reacting against albums that were priced too high. I think they also knew that profits were going more to corporations than to bands themselves. Now, it’s a situation where – if fans could support bands more directly or at least know that they were, I bet a lot of them would buy that music. So, I like the streaming aspect that at least there’s some kind of value being added back to music. I don’t think music should be free inherently, because it really is an artists lifeblood. They spend a lot of time, energy and money producing it. I think streaming is going in the right direction. I just hope that increasingly artists are paid more. I don’t think the current streaming structure is that different than the way record labels were back in the day. I think [the record companies] just get paid a little too much and the artists get paid too little. But it’s moving in the right direction. 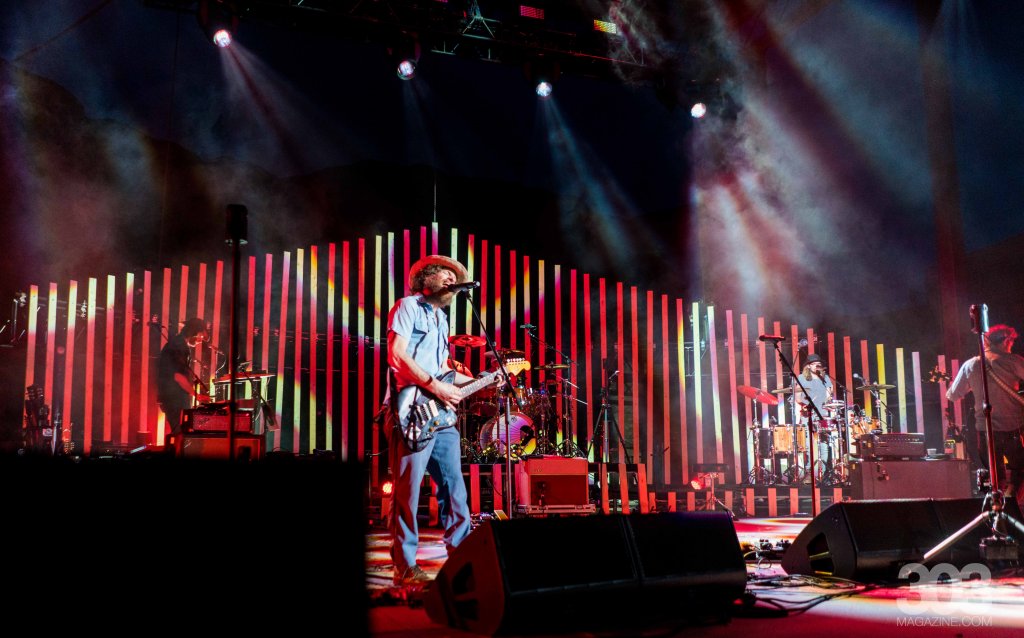 303: You’ve been making music for more than 20 years, how do you build a setlist for a show?

BC: [laughing] That’s the magic sauce. We never know. I love that we don’t play the same setlist every night, we try to keep it as varied as we can. But we love the last two records enough that focusing in on playing a lot of the new material night after night feels great. You just want to play as many of your songs as possible. So, it’s a different set list each night.

303: I know that touring is pretty emotionally exhausting, and a few years ago one of your band members, Pete Heimbold, decided to take a break from touring to focus on his mental health. How do you support each other when you are on tour?

BC: It’s a good question, and it’s probably the most important question that we try to answer collectively as a band, you know? Like is this good for all parties to go out on tour? It comes at a cost for sure. Chad has a wife and three amazing kids. Every one of our band mates has a wife or kids or a community, or so many things that we’re all invested in. Then there’s our crew. So, all of us are trying to keep track of each other and make sure that everyone’s good and everyone’s stoked on it. And then we’ll agree to a limited touring season. And when you’re on the road you’re just keeping track of each other. We all pitch in and help to carry each other’s weight.

303: That’s great that you focus on taking care of each other. I know that you also use music as a way to give back to other causes that are important to you. You and Chad Stokes have both started nonprofits, what can you tell me about that?

BC: I run a nonprofit called Love Light + Melody, and Chad runs a nonprofit called Calling All Crows, both of them are very service oriented. Love Light + Melody and Calling All Crows – we’ve been partnering together to support Pine Ridge, which is a reservation about 6 hours from Denver. It’s in South Dakota. It’s one of the most beautiful places you’ve ever seen, it’s close to the Bad Lands. It’s also the poorest community in the western hemisphere behind Haiti. It’s its own sovereign nation, given that it’s a reservation. The statistics of poverty and suicide rate, and unemployment, and diabetes, and alcoholism – it’s just unbelievable how many layers of brokenness exist on that reservation and how beautiful and resilient the people are, particularly the kids. Lots of us have a vested interest in Pine Ridge – just wanting to support the organizations that are doing the best work there to serve and uplift their kids.

303: Will you be incorporating any of that philanthropy into your Red Rocks show this weekend?

BC: Conscious Alliance is also partnering with us for Red Rocks. Where people are bringing canned food up and then we’ll be delivering lots of canned food up too. So right after the show about 30 of us are going to drive up to Pine Ridge and do a service project on June 11 and June 12 and then come back on the thirteenth. It’s really great. We just so want them to have a reason to live and an opportunity to flourish and be taught and learn all sorts of stuff.

303: You’re a Colorado native, so you know how great Red Rocks is as a venue. What’s it like to headline shows there year after year?

BC: Oh gosh. It’s such a fabled and magical place for us. One of our earliest memories as a band – we recorded our first album here in 1996 up in Northglenn, and we took a break in the middle of our recording to go to the July show where Blues Traveler was playing one of their earlier shows. We were at the very top of the venue, looking down and we kinda made a wish that night. We were like “oh gosh, I know it’ll never happen, but can you imagine if we could play this place?” So, you know, when we first played it in 2011, all those memories came flooding back and we just feel so fortunate to get to play such a beautiful venue. And our Colorado fans are some of our most energetic ones, they love to sing along. So, I think we look at it as a really sacred and fun play every year. You can’t help but just be swept away by the beauty. I remember being in a high school band, and we went up and had a picnic on the stage, just to say that we were on the stage. I mean, I was a senior in high school and we took our band press photo on the rocks. We just wanted – just a magnet for your dream 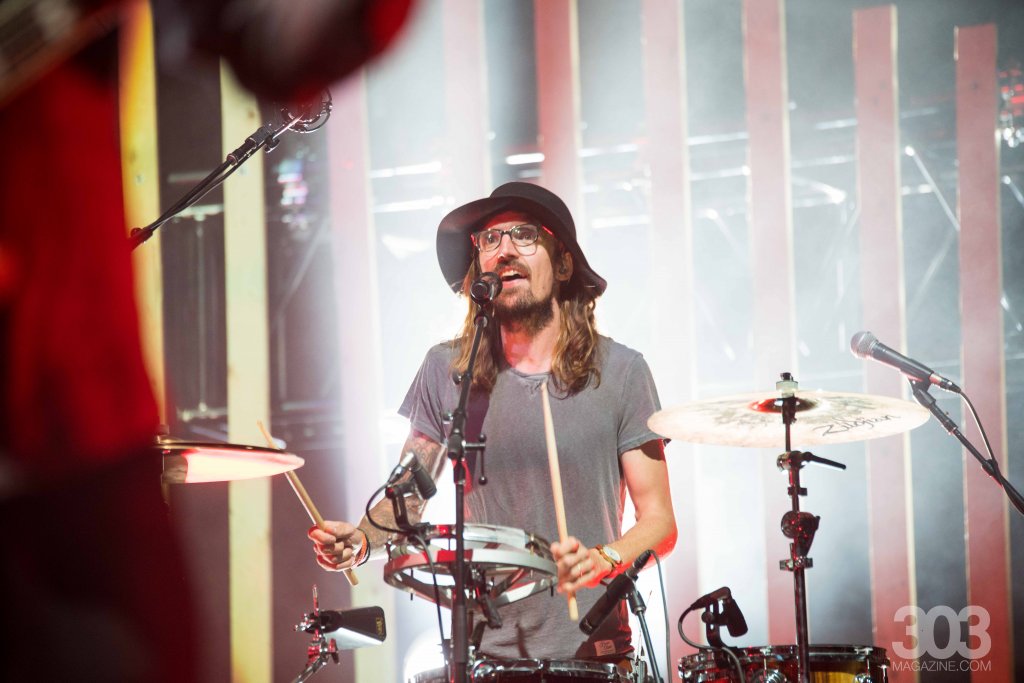 303: Do you think that those actions back in the day helped you to manifest it all happening for you now?

BC: Gosh, I think it has to have in some way! I’m a really firm believer in speaking what you want out into the world and praying into it and believing in it and sharing it with people. I think the more you articulate what you want and what you hope for, the more that stuff can come back to you. If you hide it inside, I wonder how often does that stuff really manifest? But it sure does – we still feel super fortunate each time we play up there. Like wow, this place, you cannot take it for granted. It has its own spiritual energy, has its’ own beauty, I mean, it’s just unique.

303: I know that you’re going to be streaming the show there this weekend. What can you tell me about that?

BC: Chad and I have been trying to release all of our old recorded live shows for years. I think we just released half a dozen or a dozen shows, maybe a week ago. [Nugs] is streaming the Red Rocks show kind of as our first official show together where they’re gonna be recording the video and the audio. Red Rocks is such a fun and unique one-off, Nugs and Dispatch wanted to put that out for our fans across the country so that they can see it.

BC: Yeah.  We used to record all of our shows. Painstakingly, 2001, 2002, even in the late ’90s, we were recording just believing that someday it would be really fun to release all of that material. So now I think we’ve got a platform where we can do that, and probably every month we’re going to release more shows. So I hope in the next couple of years everything we’ve ever recorded will be up and available if a fan wants to dig in and find it.

303: You’re also putting on an event for fans the day before the show. What’s the lowdown on that event?

BC: So on that particular night, we’ve got a co-branded beer on tap that will benefit our work, and I think all kinds of raffle and prize items for our fans. Chad and I are going to try to get there, we can’t commit to it fully ’cause we just don’t know what’s going to happen. But we’re going to do our best to get there, even just for a drop in. Otherwise, I think it’s just a really fun place where fans can get together and listen to music and raise a glass and hang celebrate the weekend and get stoked on it. There’ll be some fundraising elements for the Pine Ridge trip, and just be a place where people can gather and have some fun. There should be a live muralist too I think that night – some sort of graffiti mural that we’re going to raffle off at the end of the night. So it’ll be more than just music, there’ll be a visual element to it as well.

Dispatch will take the stage at Red Rocks on June 9. Tickets are available here.

Fans who would like to attend the pre-show party at Park Burger in RiNo can find more information and RSVP here.

All photos by Meg O’Neill