We Tried It – Royal Gorge’s New Via Ferrata

Fear not, inexperienced rock climbers. If you’re seeking the thrill of crawling up 1,200-foot canyon walls and are a little distrusting of your own strength and agility, Royal Gorge Bridge & Parks’ new Via Ferrata might be for you. As the fifth of its kind in Colorado, the Royal Gorge Via Ferrata has the jaw-dropping views you’d want while rock climbing and is so easy 12-year-old kids can do it (but if you’re looking for something more challenging, they have that too).

A Via Ferrata, which is the Italian translation for “iron road or iron way,” is a protected climbing route that originated in the Italian Dolomites mountains during World War I, and was once used by troops to make daring climbs. Climbing a Via Ferrata is somewhat similar to regular rock climbing, but features iron rungs installed into rock surfaces to hold onto as you make your ascent and carabiners that keep you securely fastened to steel cable pathways.

The Royal Gorge Via Ferrata officially opened to the public on Friday, May 24 in celebration of the park’s 90th anniversary, and we got to check it out. It wasn’t as scary as we thought it would be. Try it if you’re brave. 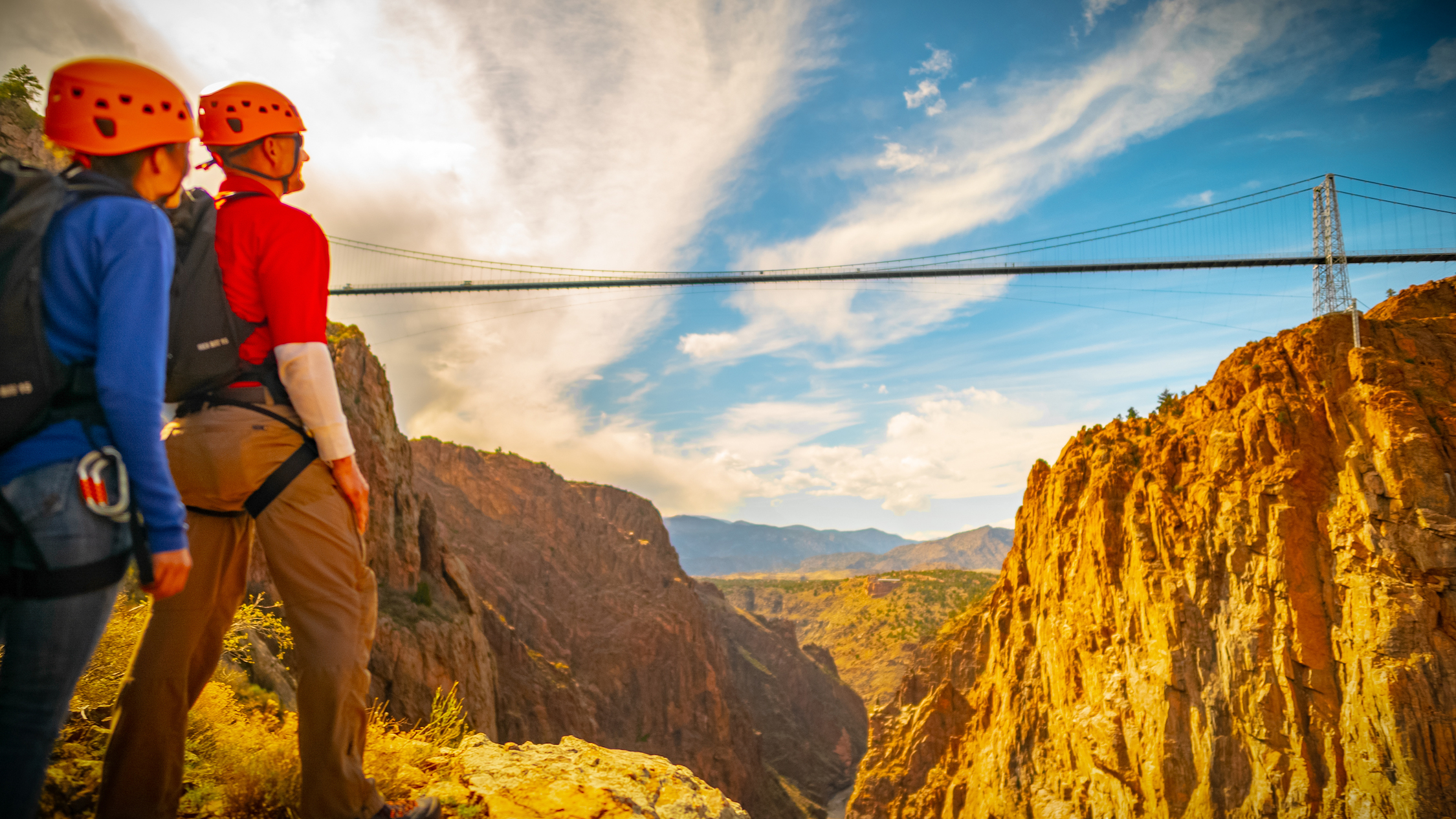 The first lyrics to Eminem’s “Lose Yourself” perfectly depict the feelings I have as my guide helps me get dressed in the gear that if needed, will save my life. I don’t quite know how to maneuver my legs into the climbing harness (I have only been rock climbing a couple of times) and if tested, I know my upper body strength is limited to a couple of occasional pushups and Chaturanga Dandasanas in power yoga. I will admit — I’m pretty nervous. I’ve been to Royal Gorge on two different occasions, and even strolling across the walking bridge makes me a little afraid of heights. My guide tells me he’s taking me on an easy climbing route, and that we can do as much or as little as we want. I lace my climbing shoes provided for me and fasten my carabiners to belt loops on my harness. The gear is similar to rock climbing, but I’m happy there are no ropes involved and I don’t need to rappel down any sort of cliff face. I get a helmet and a backpack for my personal belongings (they let me bring my cell phone) and I’m ready to go. It’s time! 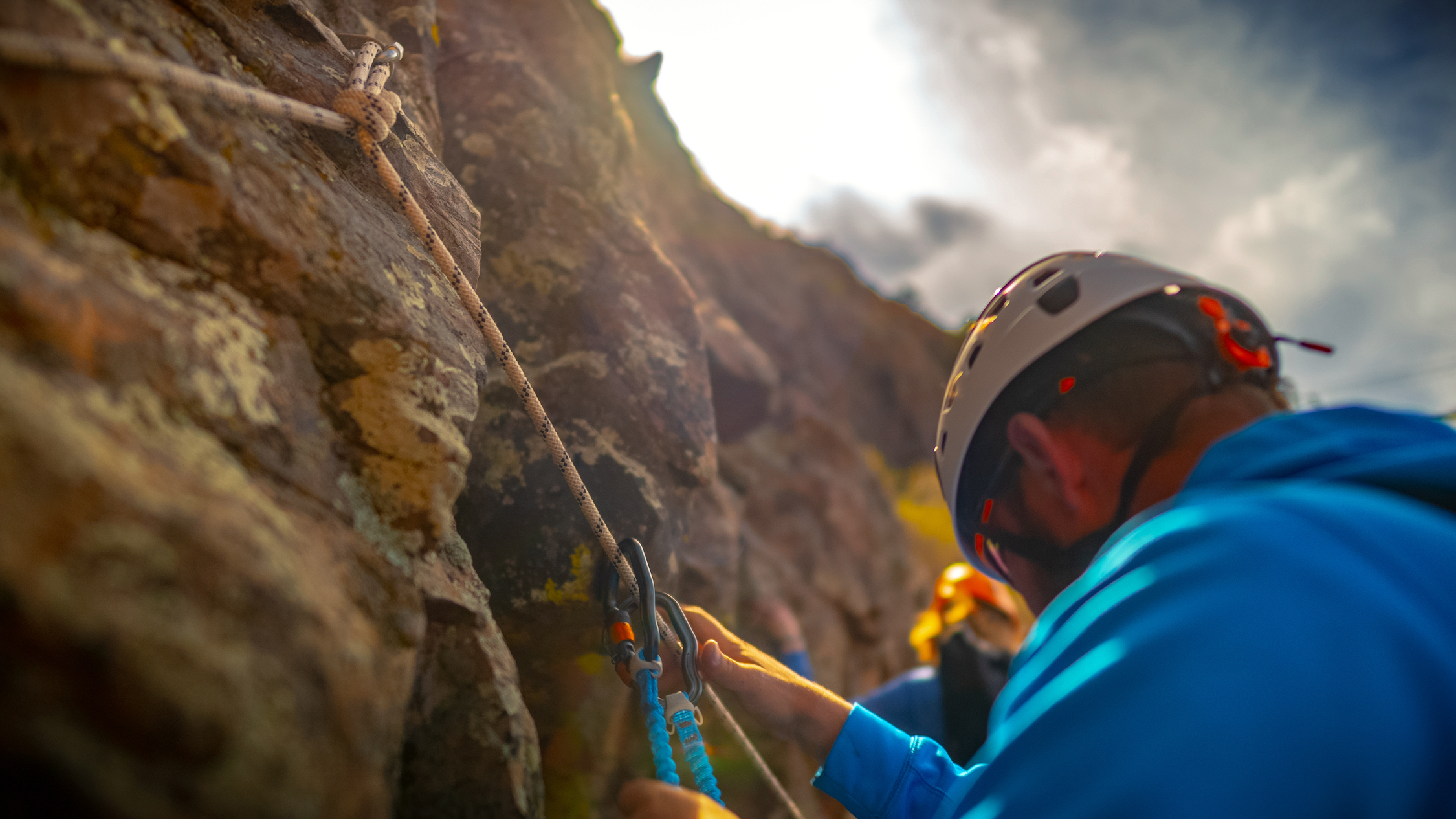 In order to start my climb on the Via Ferrata, I have to hike down into the gorge first. With nothing to secure me quite yet, this sounds daunting, but after seeing the trail, my nerves ease up a bit. Apart from a couple of rocks to watch out for, it’s a pretty mellow trail down with no steep cliff faces in sight. The short hike is relaxing. The view into the canyon is stunning and it’s much quieter away from the more adrenaline-pumping attractions like the zip line and sky coaster. My guide tells me that was the intention. The park staff agreed that it was time for people to see the gorge up close and recognize there are other ways to witness its beauty apart from just catapulting yourself into it. When we finally arrive at the starting point, I look up. The route seems like an asymmetrical ladder. Iron rungs secured into the rock face look sturdy enough, and steel cables next to the rungs run perpendicular. My guide straps my carabiners onto one of the steel cables and tells me to simply clip them on and off as I make my climb. The short segments of steel cables require me to fasten one carabiner on and then the other. He warns that the only mistake I can make is taking both of my carabiners off at the same time. I must always make sure at least one of the carabiners is on a cable at all times. It sounds simple enough. I begin my ascent and breathe a sigh of relief. It’s easy! The movements are similar to climbing a ladder, and the cables make me feel secure enough to enjoy the journey. Unlike regular rock climbing, I’m not scrambling to figure out my hand and foot positioning and simply look for the next rung to help me on my way up. With a couple of breaks in between to enjoy the view, I make it to the top in under an hour.

View From the Top 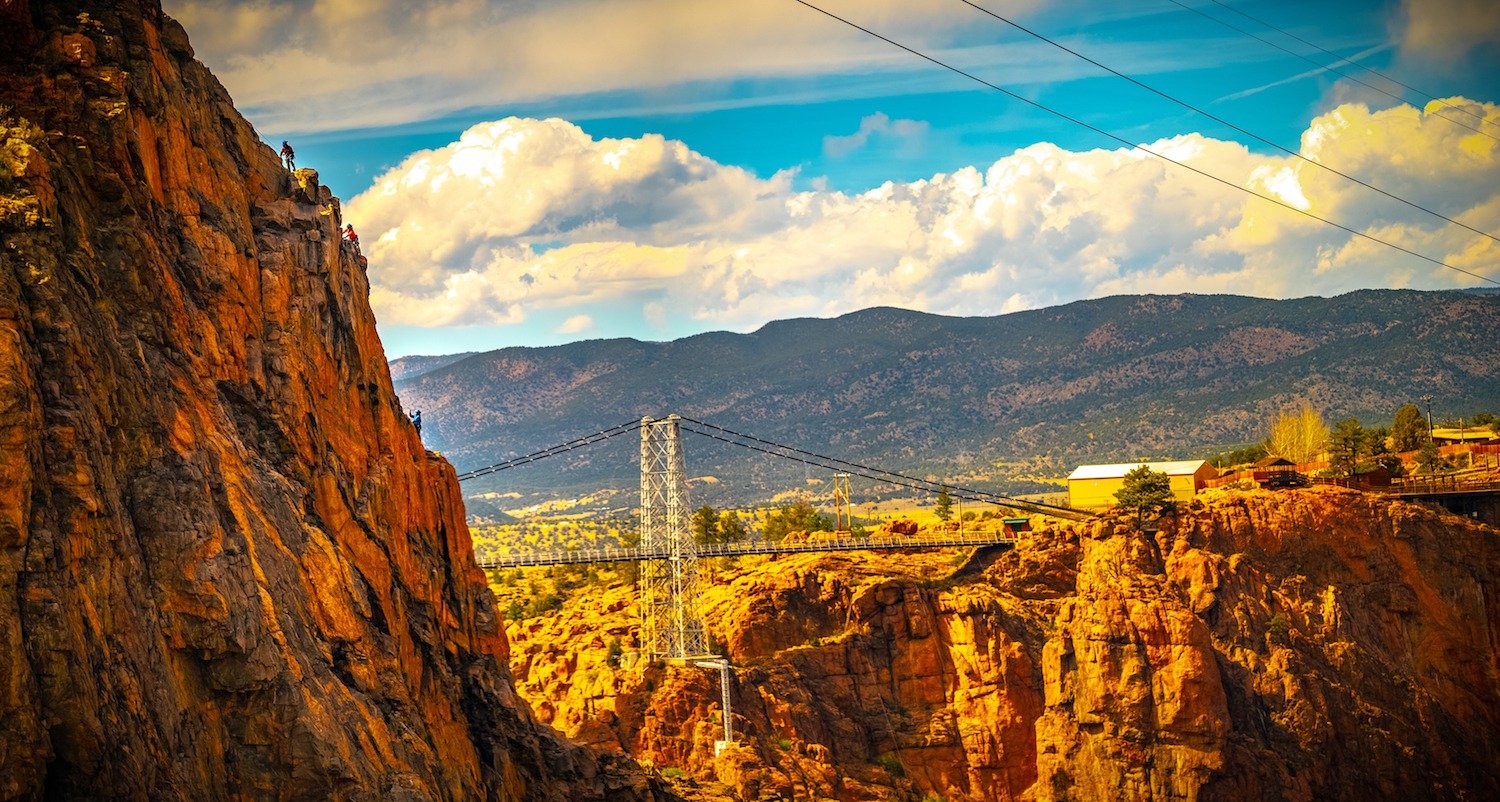 It didn’t require a lot of energy, but I finally made it back to the canyon ridge near where we started our journey. My leggings are a little dusty, but I don’t have the ripped palms that come from rock climbing, but still feel as though I conquered a great feat. It feels great to look down at my progress and the drop doesn’t seem so intimidating. I will definitely be back for another go. The Royal Gorge doesn’t scare me anymore.

The Royal Gorge Bridge & Park is located at 4218 Co Rd. 3A, Cañon City and is open from 8 a.m. to 4 p.m. every day. The Royal Gorge Via Ferrata is only for those 12 years of age and older who can meet height and weight requirements. Prices start at $135 for the shorter tour and $165 for the longer tour. The average tour can range from 2-3 hours or 4-5 hours and each course will have varying degrees of difficulty. Private tours are also available. Please make a reservation here.