Can you remember the first time you were touched by music — a time when the sounds washed over your body, leaving you gasping for air? Perhaps a moment where your belief in magic was held in breathless suspense — levitating after the house lights came up, leaving your mouth puckered without any words left to say? Florence and the Machine is one such artist, and her performance at Red Rocks was one such moment. In a flurry of snow and in the grip of cold, Florence and the Machine took Red Rocks to a marvelous place, one too good to believe, and for a place like Red Rocks,  that’s saying something. 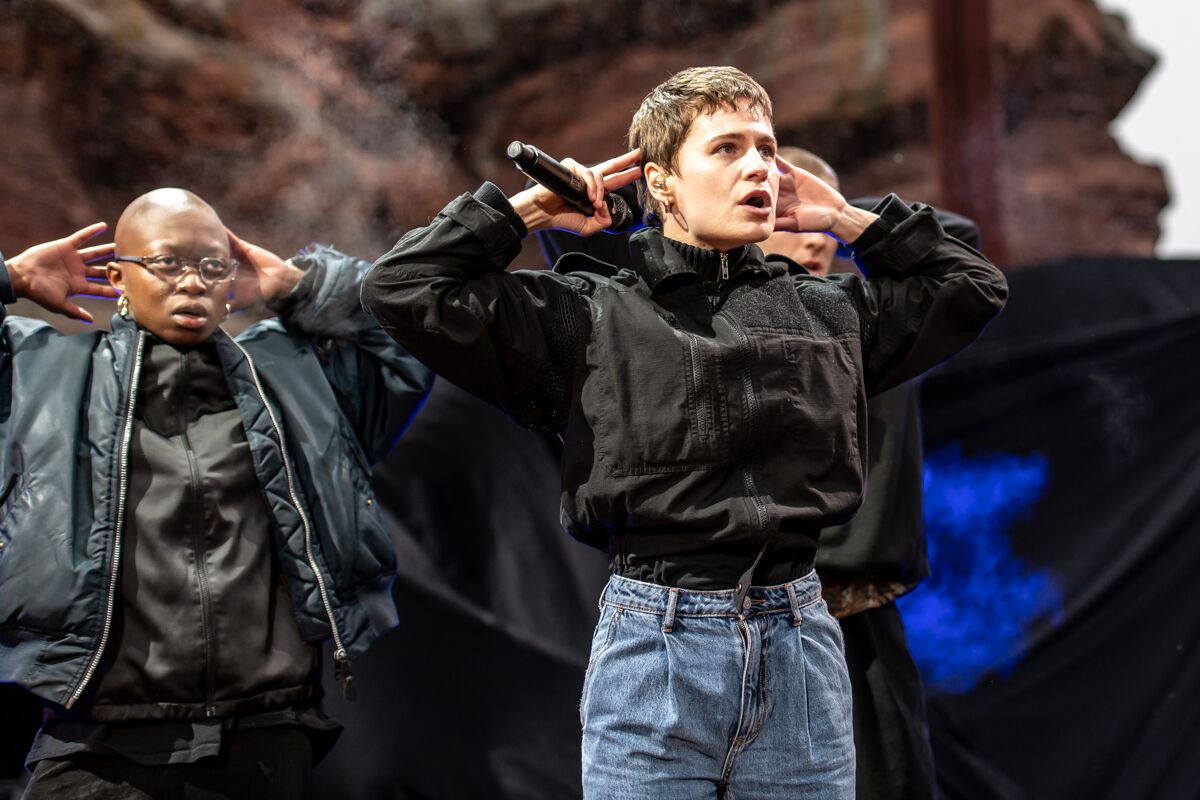 Snow cascaded down across the monoliths — a thin layer accumulating atop the stairs and on the hoods of the many jacketed fans pouring into the amphitheater. Weather as wild as it was for the end of May, was just a little spice thrown into the mix — the many fans were unfazed. French art dance-pop group, Christine and the Queens opened the performance bringing much-needed warmth to the frigidly cold stage. Petite but with a fiery persona, Héloïse Adelaide Letissier aka Chris of Christine and the Queens, led the Queens — her immensely talented dancers — in turning up the thermostat of the venue. Reminiscent of Janet Jackson circa Rhythm Nation era and the dance brigade pop of the ’90s and early aughts, Christine and the Queens popped and percolated through the ’80s inspired music with poetic precision. 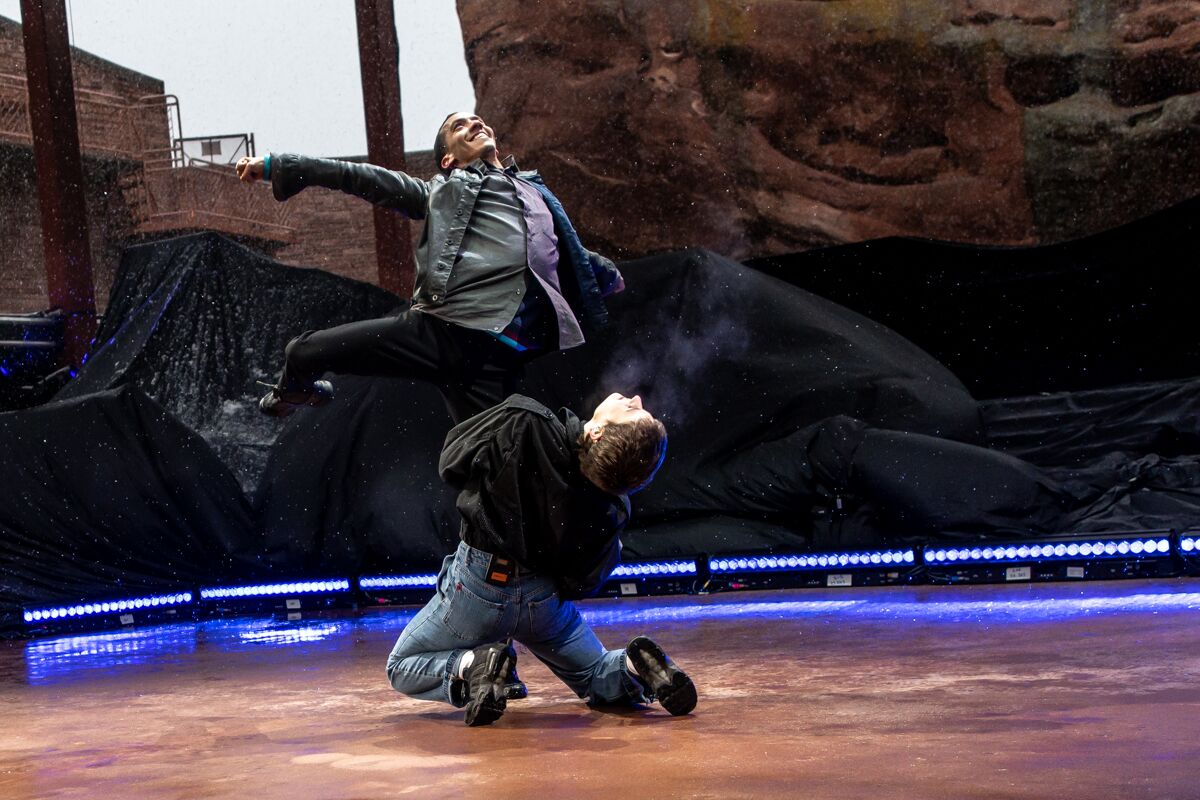 As Chris sang, she and her dancers would paint the emotions through broad strokes of movement, amplifying her music that’d oscillate between English and French at any given moment. “Girlfriend” brought cool cockiness whilst “Damn (what must a woman do)” left a smoking gun of sexiness, but it was perhaps her performance of “Doesn’t Matter,” that stole the show. Accompanied by a single dancer, Brandon Masele, he and Chris traded moves, culminating in Chris slithering across the floor in emotional turmoil while Masele flew around the stage in a feverish display of seemingly broken limbs. It was nothing short of art — reciprocated in a resounding ovation. 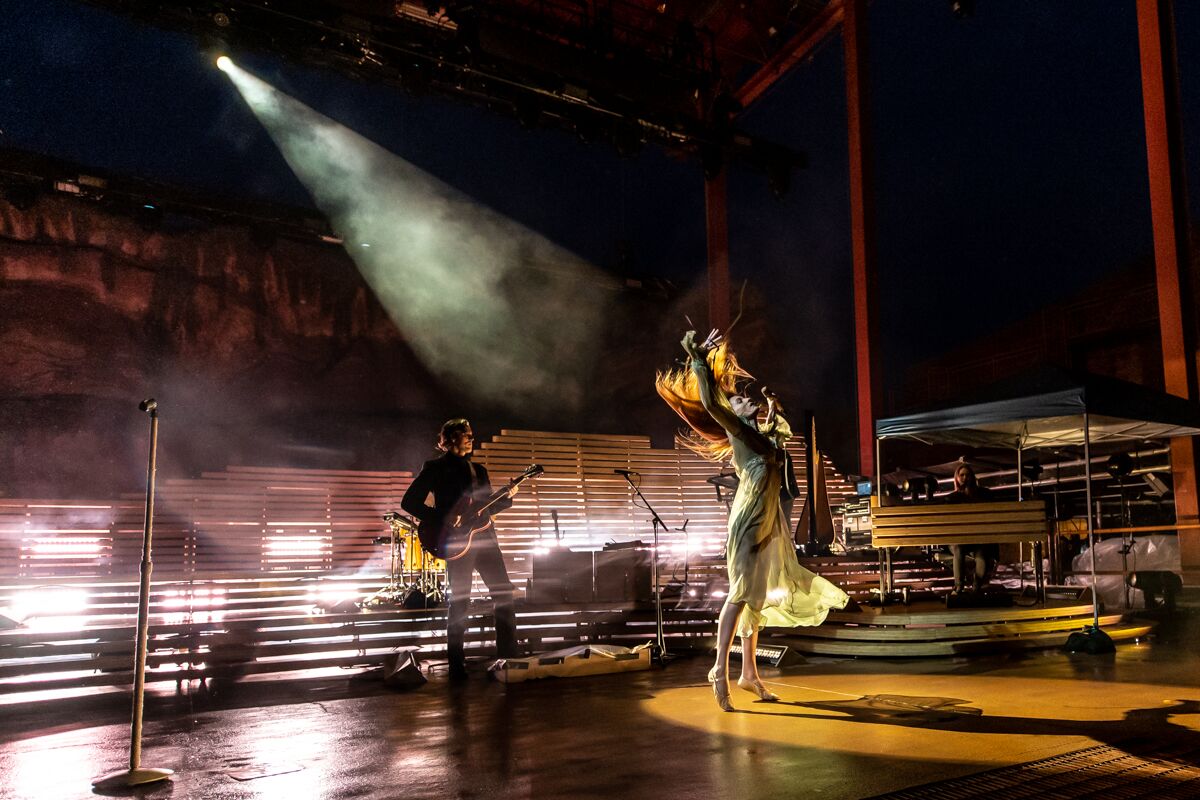 The snow, in turn, ebbing and fluttering from the sky, set the perfect stage for Florence and the Machine to finally hit the stage. Emerging atop a wooden platform that seemed to resemble the topography of the amphitheater, Florence Welch, in nothing but a fragile lace dress and ballet slippers, opened her show with “June.” With a voice soaring out into the snow as the lights from the stage lit the snowflakes until they looked like sparks, the enchantment of the night took hold. Though obviously cold, Welch’s voice held such warmth as she slipped from one anthemic number to another. Warning the audience that they’d potentially pull the show due to the conditions, Welch soldiered on. 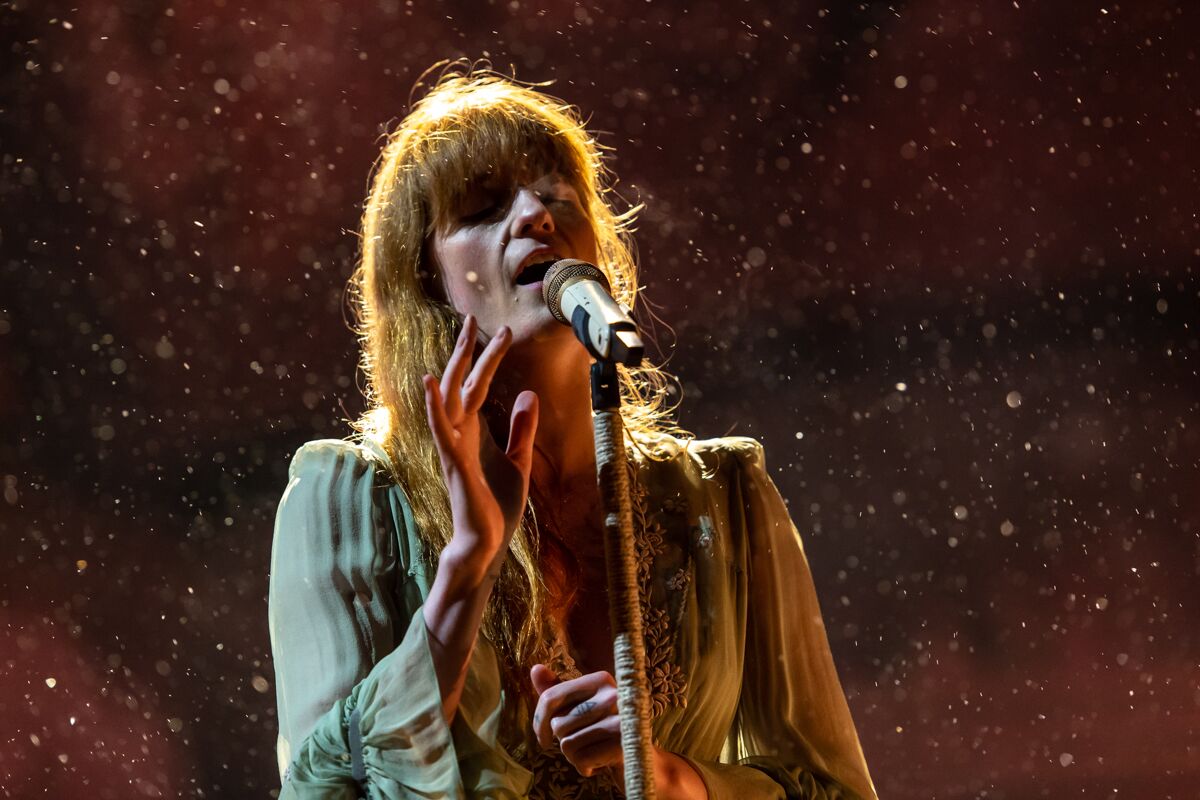 The group, mostly sticking to upbeat cuts like “Queen of Peace” and “Hunger,” tore a hole through the sky through the flawless fire of Welch’s voice and the band’s impressive musicianship. Shaking and trying to find warmth, Welch told the audience she felt like a “fraud” calling her latest album High as Hope, amidst her bouts with anxiety, and how “sometimes hope is as little as taking one step forward” — her insistence on performing in the elements a testament. Welch told the women in the audience that “America’s women deserved better” discouraging her fans from purchasing her merch, rather, telling them to opt to organizations like the ACLU. During “Dog Days Are Over” phones were planted in pockets and Welch encouraged connection with our neighbors and during “Cosmic Love,” hundreds of colored bags illuminated through the audience, creating a rainbow from the front to the back of the venue. The show was eventually cut short out of precaution to the performers, but not without the euphoria of “Shake It Out” lighting the amphitheater up like a flare — with the voices echoing into the silence of the falling snow.