Colorado, with its glut of outdoor enthusiasts, might just be the perfect place for artist Patrick Dougherty to build his open-air, site-specific stick sculptures. The avant-garde carpenter just completed his 300th installation of his career, though he’s already completed a handful of sculptures in the state, including one that is still standing. Last year, the globally-recognized artist spent just under a month in Vail creating one, which he calls a “Stickwork.” This year, he returned to Colorado to produce an entirely different Stickwork at Denver Botanic Gardens Chatfield Farms location.

Each Stickwork Dougherty constructs uses locally sourced materials — something that allows him to travel freely from location to location without being encumbered by truckloads of sticks while also serving as a way to lessen his environmental impact. This also means that every Stickwork is unique and particular to the region it lives in — in Hawaii, for instance, the sticks come from Eucalyptus trees, whereas on the East Coast he’ll use a lot of Maple branches. Colorado is special because of its aridity (or dryness) which preserves the sticks for longer periods after building it is completed, although the average life span of a Stickwork is at least one year anyway. 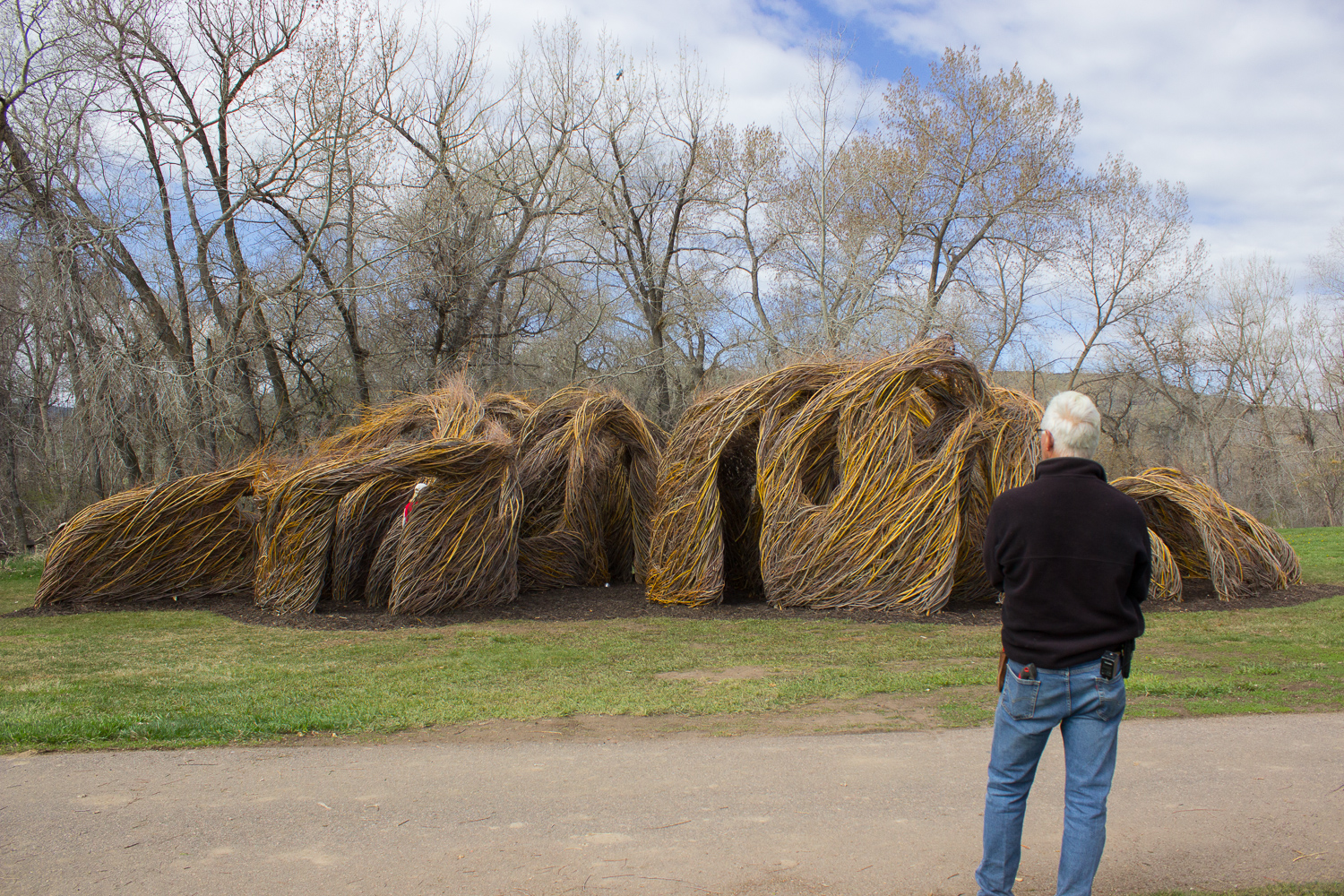 Dougherty standing in front of his creation “In One Fell Swoop”

The Denver Botanic Gardens had their eye on Dougherty and his stick sculptures before Vail secured him though, and their staff has been working with Dougherty for a few years already. Connecting with the environmental surroundings is important for Dougherty and his creations, but it’s also essential to connect and collaborate with a team of dedicated local volunteers. These volunteers not only help shape the installations — weaving sticks together, helping with structural integrity and finishing touches — they can also help at times with sourcing the materials. For this Stickwork, Dougherty reported that the Botanic Gardens’ staff not only found sticks within the grounds of the Chatfield garden but also from neighboring homeowners who were spring cleaning, as well as scouring some BLM land.

Once the building material is collected, Dougherty uses the natural appearance and color of the sticks to help inform the design of the sculpture. In Vail, his Stickwork was inspired by the elegant curvature of Japanese ceramics, which he was able to emulate using long willow branches. But at the location on the Front Range, south of Denver, he experienced a different ecosystem. It invoked in him the idea of a rattlesnake, which he used as the base for the Chatfield sculpture. Although the idea of a snake is lost from the ground, drone footage reveals the coiling body of what is undeniably a snake. 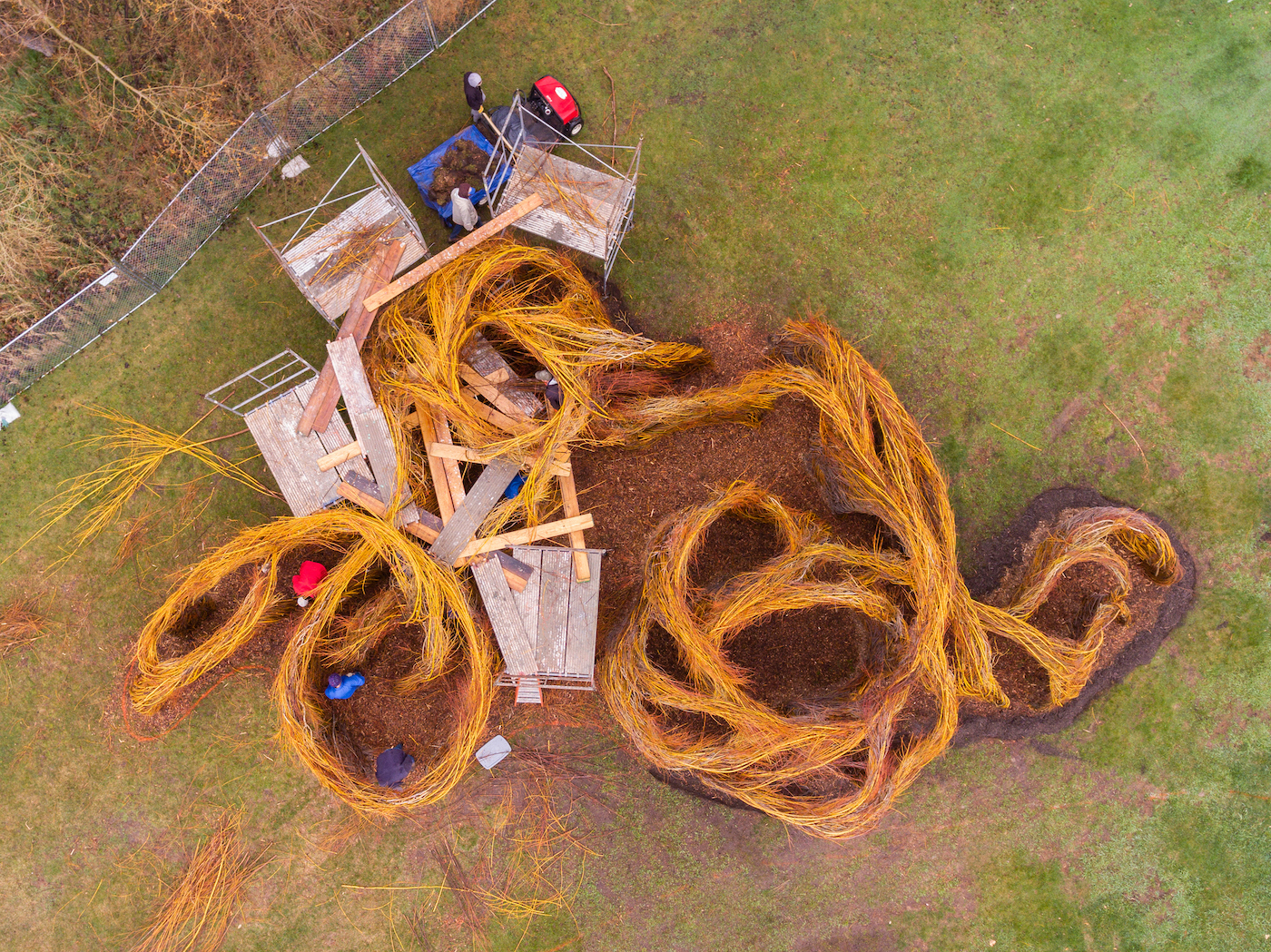 In progress view from above. Photo by Scott Dressel-Martin, courtesy of Denver Botanic Gardens.

“There are generally short sticks around [Denver], so having two big truckloads from Fort Collins was helpful,” Dougherty explained. “We had these big long yellow sticks from Fort Collins so we were able to employ those to get a grander sense of motion,” he added. “I took a look at a Colorado rattlesnake and then scaled that out on the ground and let the coils and overlaps of the coils become hallways and walls and vestibules.”

Indeed, the structure is maze-like with many entrances or exits. A small courtyard exists between the main coils of the snake, where people from either side inevitably meet. The pattern catalyzes the activation Dougherty strives for in his Stickwork repertoire — inciting delight in the people who experience the work. For some, that delight might come from memories that are sparked within the branchy walls. For others, it might bring them a sense of connectivity with nature. 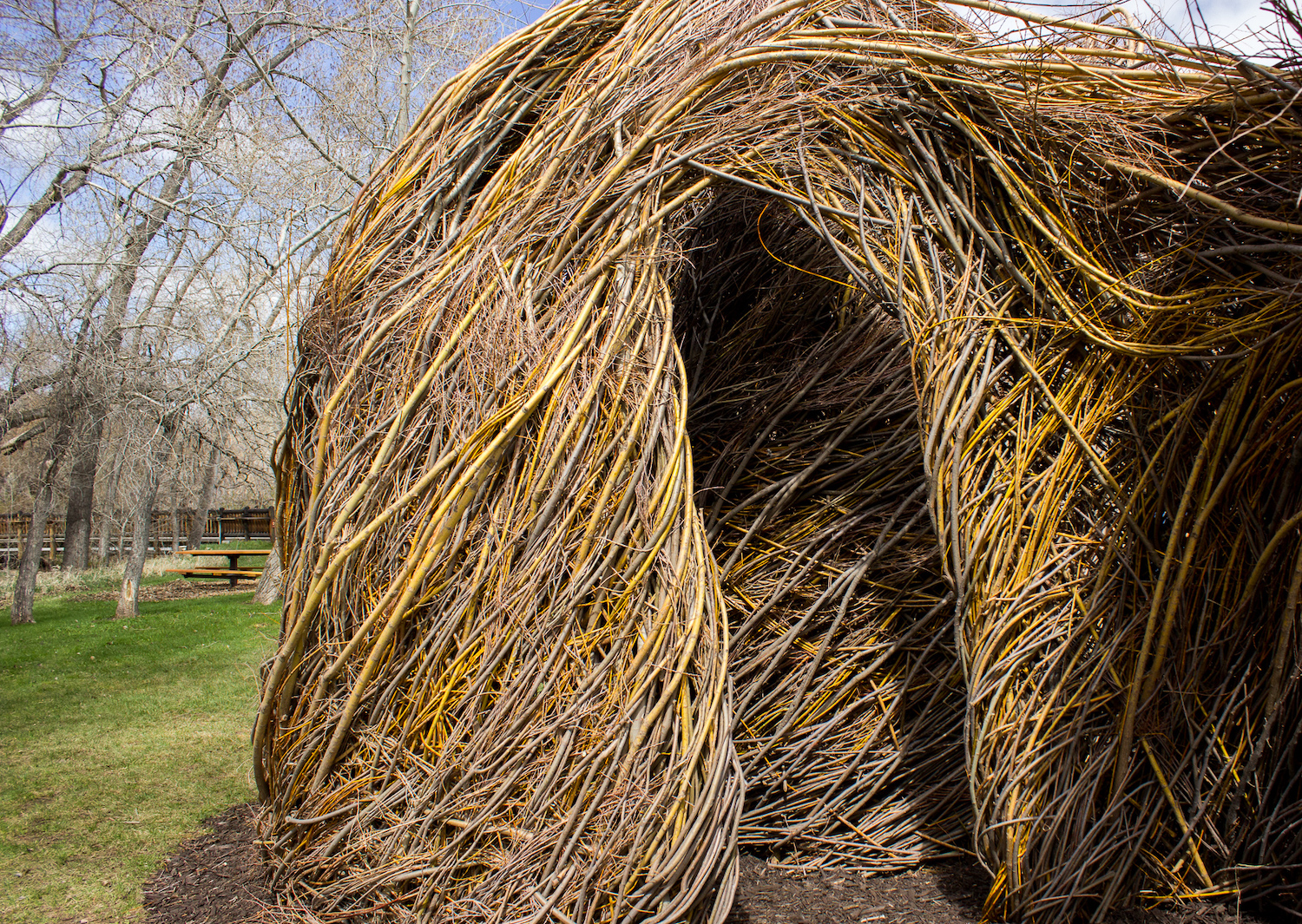 One of the many options for an entrance or exit.

Building one of these open-air installations is extremely labor-intensive. Dougherty begins by placing foundational poles (made of larger sticks, tree trunks or limbs) to distinguish the general outline. These are woven together by smaller sticks and saplings, using a matrix-like pattern and some ropes (which are later cut away). The final piece is adorning the entire sculpture with other sticks and organic debris by affixing pieces to the matrix. This is where Dougherty is able to represent movement, motion and the appeal that the sculpture has grown up from the ground.

Dougherty playfully encourages people to push and prod the Stickwork — a testament to its durability and rigidity, as well as an invitation to interact with it. The experience from within the walls of the sculpture is quite different from the outside — sonic qualities are distorted, the smell of the branches filters into your nostrils and (in this one) you can look up to see slices of the sky.

The one at Chatfield is titled In One Fell Swoop, and measures about 60 feet by about 30 feet and towers at 13 feet high. It appears to be twisting, maybe even reacting to the nature around it. Situated between two walkways inside the Botanic Gardens, (close to the event barn where weddings and other events are usually held), it’s easily accessible to people of all ages and intices all those who walk by to explore it.

It opens to the public on Saturday, April 27 and will be on view until the structural integrity starts to deteriorate (about two years). In order to see and experience it, visitors must travel into the boundaries of the gardens, which include a homestead and operational farm as well as decorative plants.