If You Haven’t Met Knuckle Pups Yet — You Should

Local band Knuckle Pups sits around a small table in the backyard of a small house in the Cherry Creek neighborhood of Denver. As the sun sets, the five band members reminisce about the time the spent at Treefort as the feed each other popcorn and pass around plates of appetizers. The evening feels less like an interview and much more like a family dinner. Of all the things Denver has to love about the local music scene, bands like Knuckle Pups are at the top of the list.

Knuckle Pups is one of the younger bands within the music community. The quintet has been a part of the local scene for more than a year, however, it wasn’t until just a few months ago that their final member joined the group. At first, Knuckle Pups consisted of vocalist Oliver Holloway and drummer Tomas Campos, who started the group after playing in other bands together. After laying the foundation for the band, Holloway set about finding the right people to join them. He ran into his old classmate Olivia Hendricks in a bar, and shortly after the chance encounter, Hendricks joined the group along with her Omnichord. The group found bassist Chelo Aguirre through a post on Craigslist, but something was still missing. The final member, guitarist Chloe Greene, was spotted at an open mic — and the rest is history. 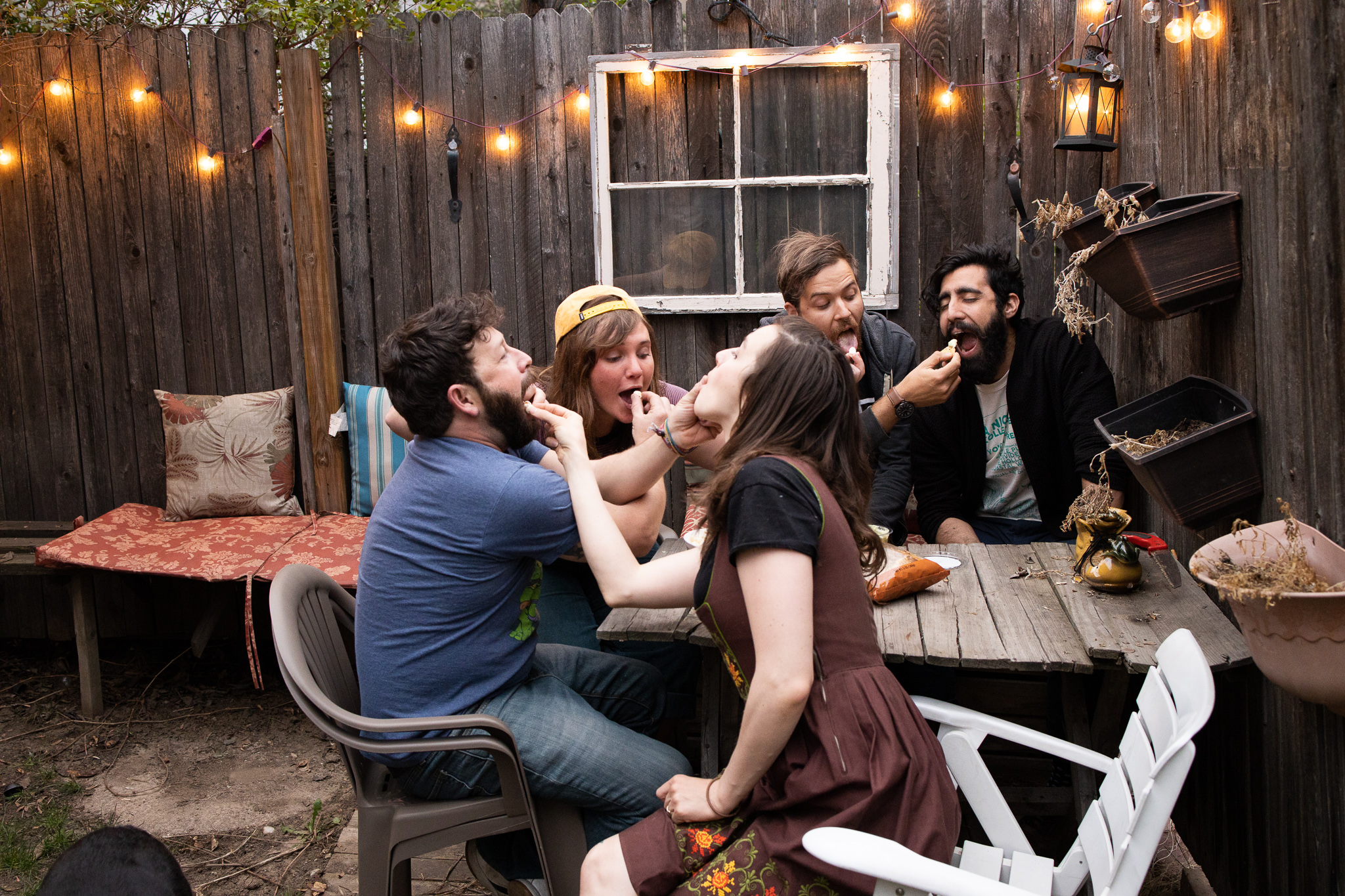 While it may have taken longer than average for Knuckle Pups to find all their members, it was well worth the wait. The members of the self-described soda punk band are friends first and foremost — the music is secondary. In fact, some of the band members even learned to play new instruments for the band. “It’s about the right people more than anything else,” said Holloway in an interview with 303 Magazine. “For me, collaboration is so much better with people who are stretching and learning at the same time. And we’re all meeting in the middle of this cool unknown area. I think that the end result is something that’s way more interesting sonically.”

Taking the extra time to find the right people to create with has certainly paid off for Knuckle Pups. The band played their first live show alongside Saintseneca and Trace Mountains, to a sold-out Larimer Lounge. That show took place in October, and a few things have changed since then, including Greene joining the band. However, even though some things have changed, many things have stayed the same for Knuckle Pups including their focus on building community and creating music they want to listen to.

For bands like Knuckle Pups, there’s no place better than Denver to break into the music scene. Denver’s unique location makes the scene isolated enough that young bands have opportunities to play shows with bigger bands that travel through town. However, it’s still a fair amount of work to build a community of other bands and musicians you like playing with — but Knuckle Pups is ready to do the work.

“Music has always been equally about the actual art of creating something that you love,” said Holloway, “but also about the sense of work that it takes to bring people together. There’s so much you do behind the scenes as a musician. You’re constantly working to try to bring people into the fold.” For the indie-rock quintet, building their community is as much of a focus as creating music. “I really believe that music and community are so intertwined,” said Holloway. 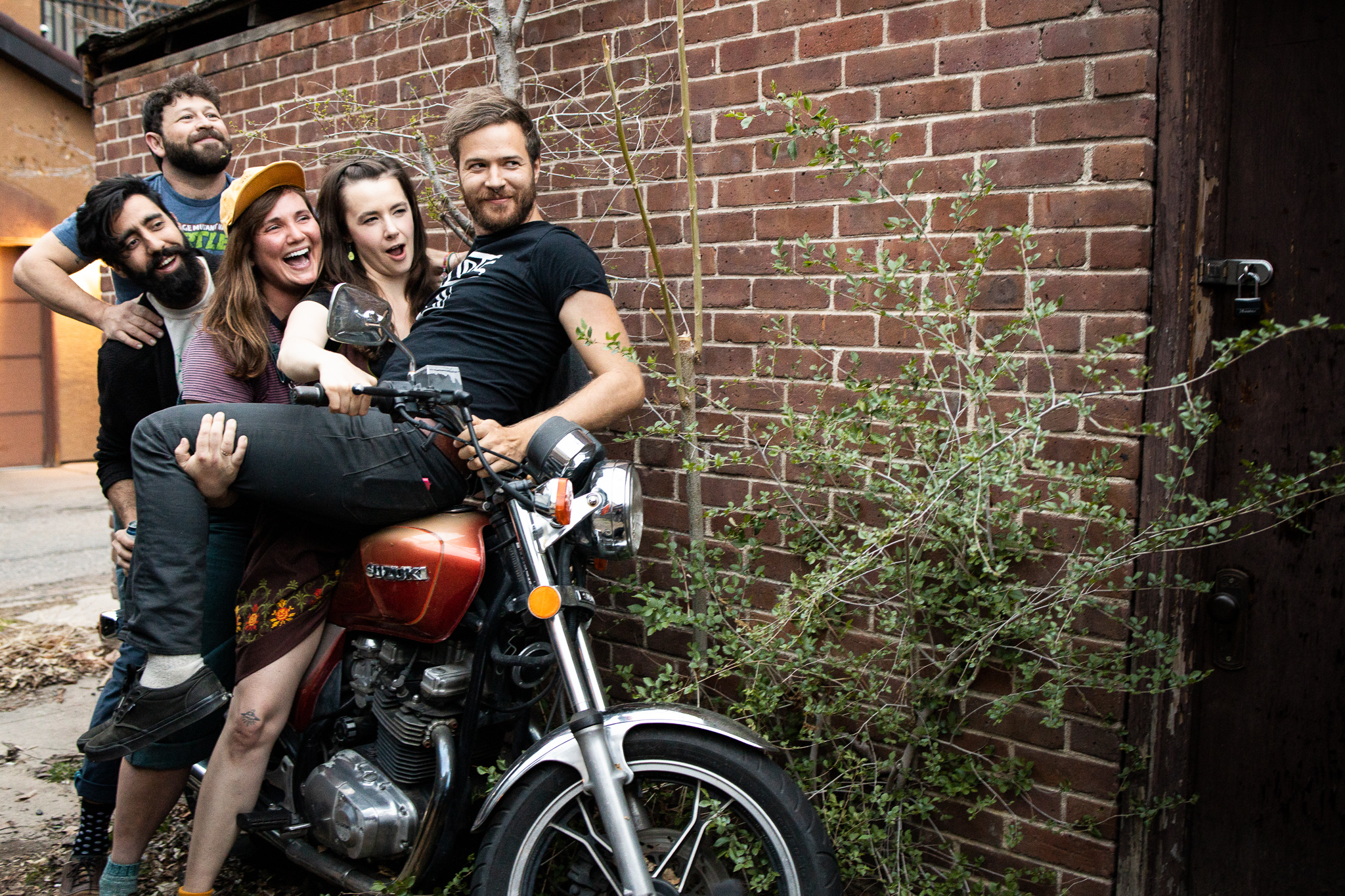 This devotion to the music community is one of the things that makes the band so much fun to be around. The group truly wants to build a community of not only other musicians but also of fans. For Knuckle Pups, music is a unique form of expression that allows them to connect with others.  “There is a real serious lack of genuine community in our culture. Everything is so regimented,” said Holloway “Music can really transcend that.”

Musically, the group is focusing on creating music they like and are proud to share with audiences. “We’re not worried about fitting into a certain genre,” said Greene. “We’re just like, ‘let’s make some songs we can dance to and that other people can dance to.’ It’s more about — what do we want to do on stage? What do we want to give to the audience? We want to feel like we’re creating together.”

The future is never certain for anyone, but Knuckle Pups is excited to see where this journey takes them. After releasing one short EP and playing some local shows, they’ve found themselves in a position of having to turn down shows because they’re already playing so many. With so much support as a young band, it’s clear that Knuckle Pups is doing things right. There’s no doubt their future is bright. If you’re one of the many Denver music fans, this band is one you’ll want to watch. Be sure to catch one of their live shows and be sure to stick around and introduce yourself after the show — they love to make new friends.

You can keep up with Knuckle Pups by following them on Instagram.