The One Club For Creativity Denver presented the 15th Annual Paper Fashion Show last Friday at the converted airplane hangar, The Hangar at Stanley Marketplace. This year with a sold-out show — its second largest crowd in its history — and more than 48 designs made it the largest show of its kind in the country. A giveaway from the show’s name, each design was made from paper and took an average of 200 hours to make. The designers and teams competing in this year’s competition have been preparing for this show for months. This years theme — “Haute Couture in Paper” — made sure the competing teams went over the top. The theme left the creativity and interpretation open to many possibilities.

Many teams like Karen Hofmeister and Lacey Hall were inspired by the venue choice saying, “We wanted to create our design lucky lady, based on the fact that the venue is in an old airplane hangar while also pairing it with the theme of a ’40s pin-up girl.” Other teams drew inspiration from fantasy and nature such as first place design “Sakura.” The design was inspired by Japanese cherry blossoms and resembled the flower with hundreds of hand-sewn paper petals strategically wrapped around the garment to create a seamlessly tapered gown. 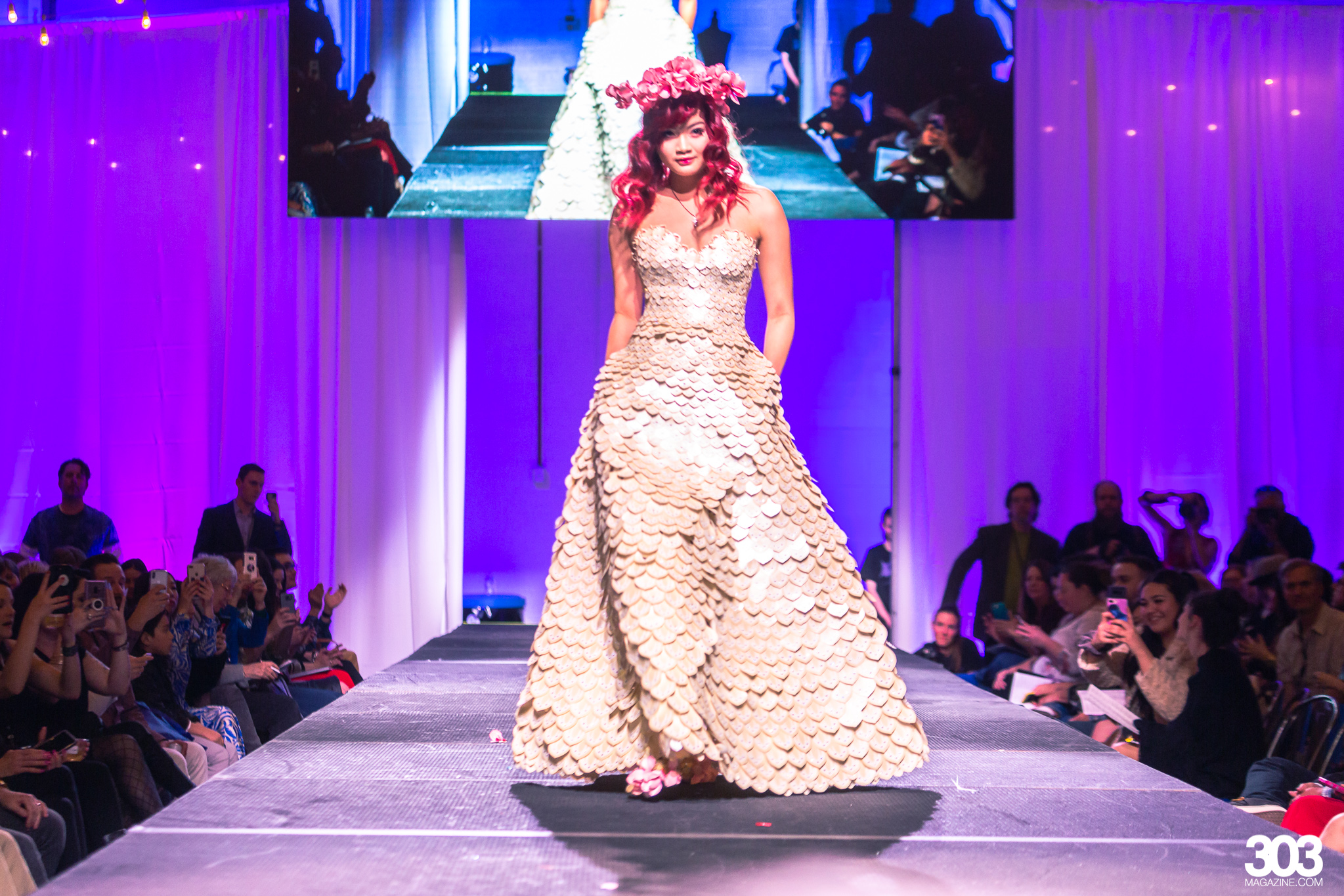 This year’s show brought out some of the most jaw-dropping designs but the top designs from the show were ones that were both over the top and had an uncanny resemblance to high fashion garments. The top designs of the night each moved down the runway as if the creation was not made from paper but from fabric. The pieces seamlessly fit on the models’ bodies and flowed with their movements like fabric. Second place winner, “Flower of Life” by Blue Linen Creative, showcased an abstract dress made up of colorful geometric shapes and a matching stole that opened into a wing-like structure, wowing the crowd and the judges. 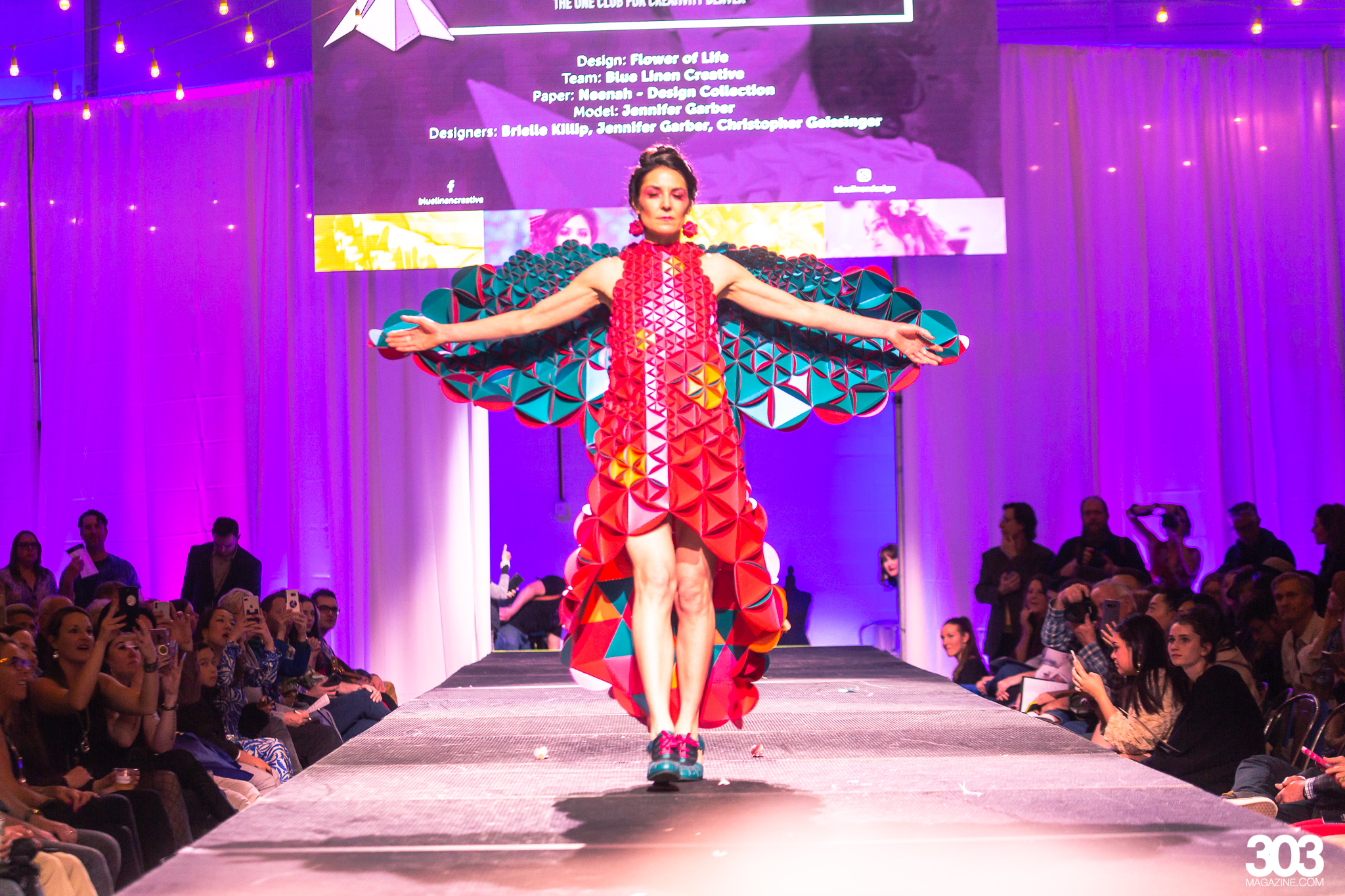 The nine judges this year were all well-versed professionals in the fashion, non-profit and beauty industries. They judged the garments based on wow factor, texture, wearability and accessories. “Each design that came down the runway showcased a great wow factor and with so many amazing creations it came down to what designs were the most wearable and deceptive to the human eye in whether it was paper or fabric,” said judge, Gabriel Medina.

The paper creations were just as impressive and technical as some of the top designs coming down high fashion runways. In celebration of the night, 303 Magazine captured some of the top looks and showcased them below. 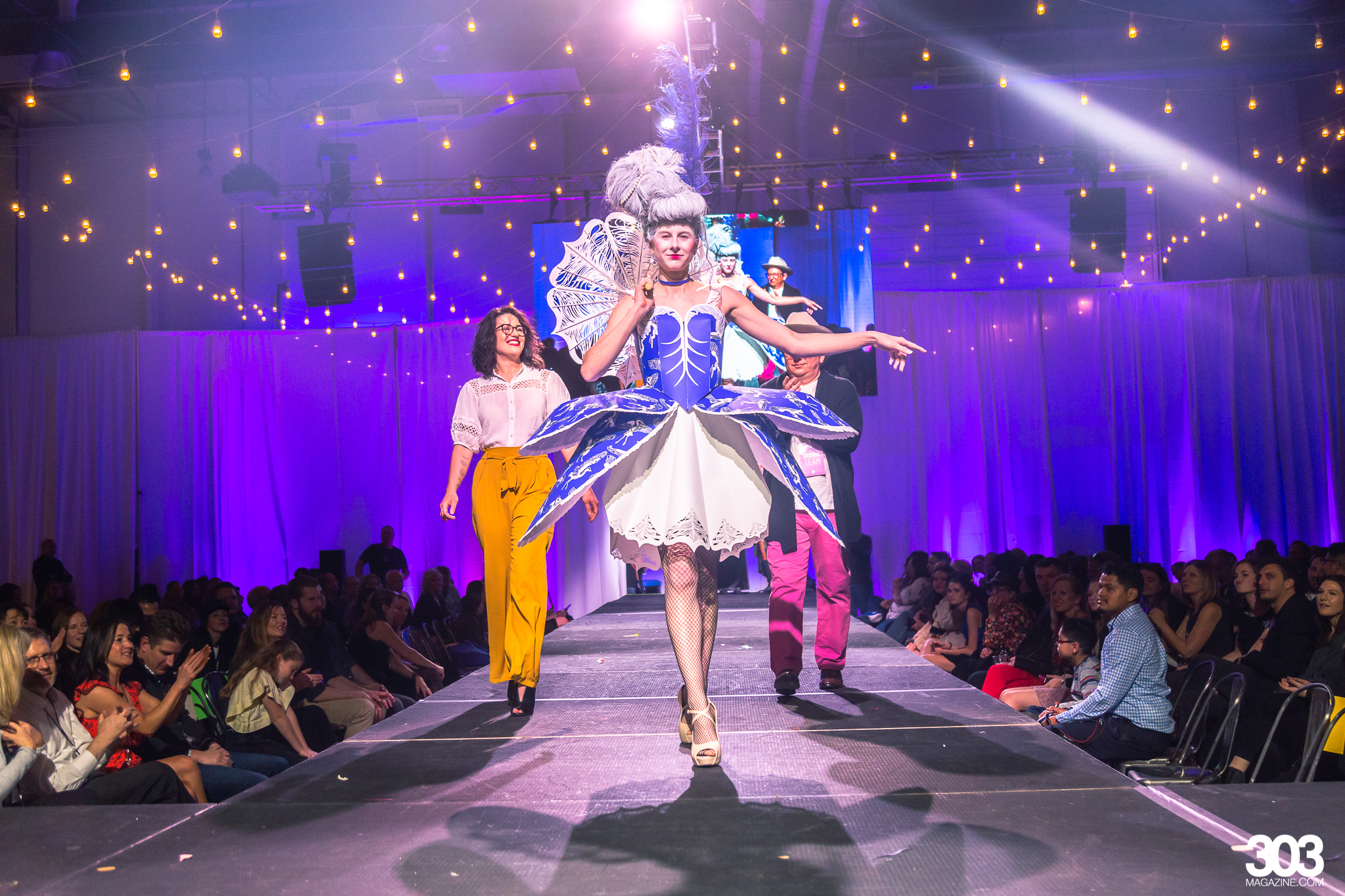 Third Place winner “Rise of the Bluegeosie” by Rosa & Rivera. 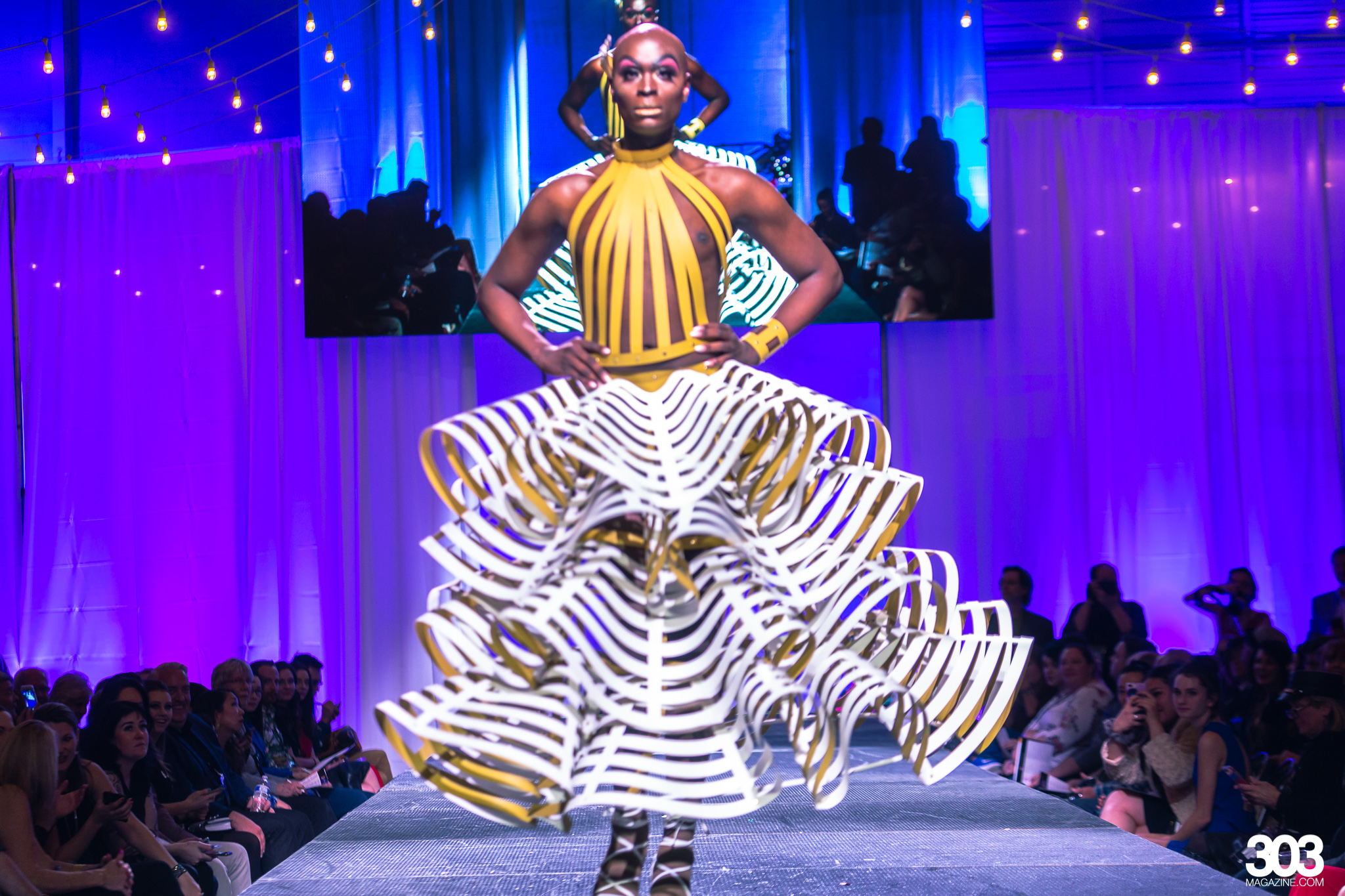 “God of the West Winds” by ArtHouse Design. 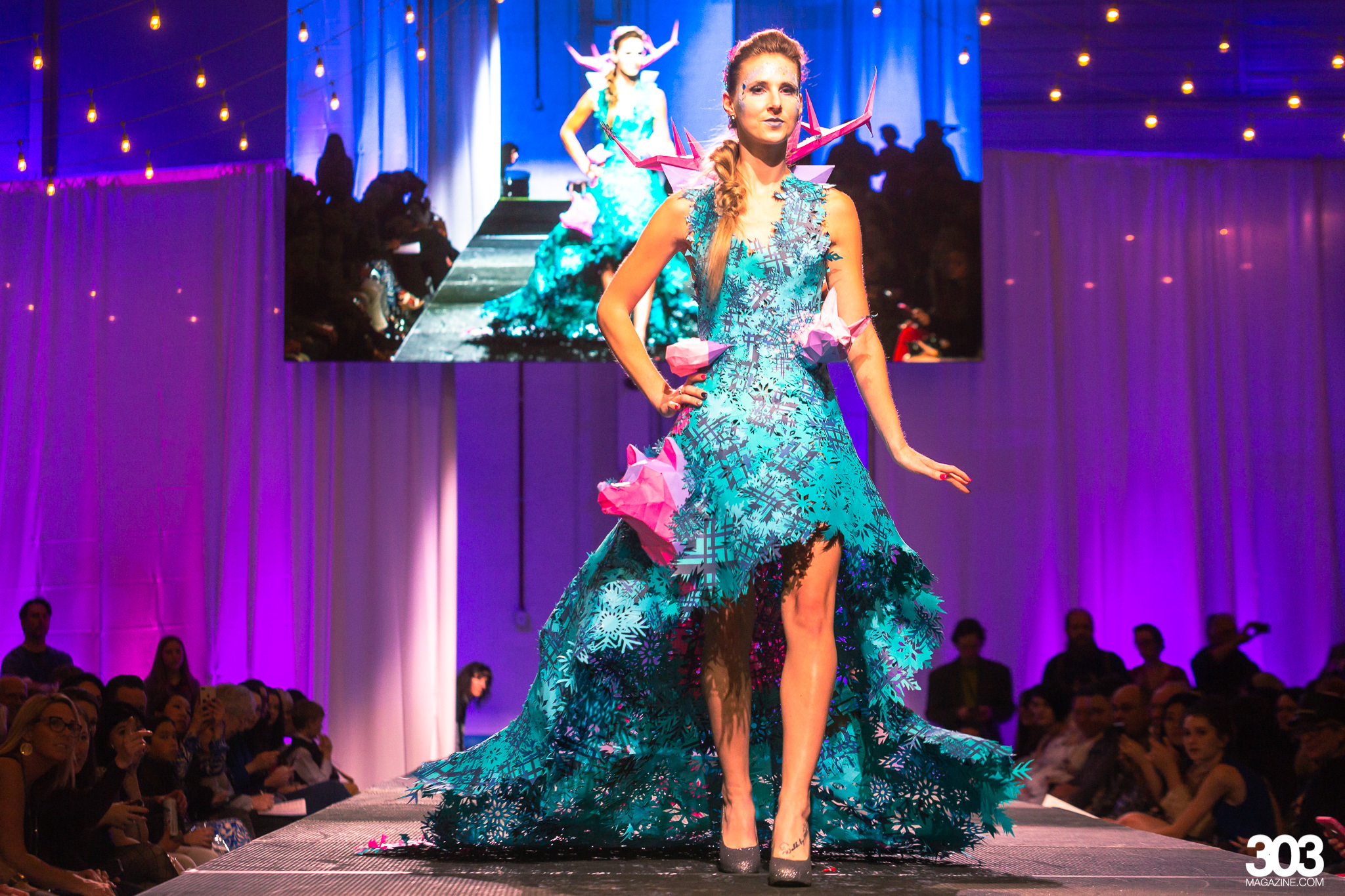 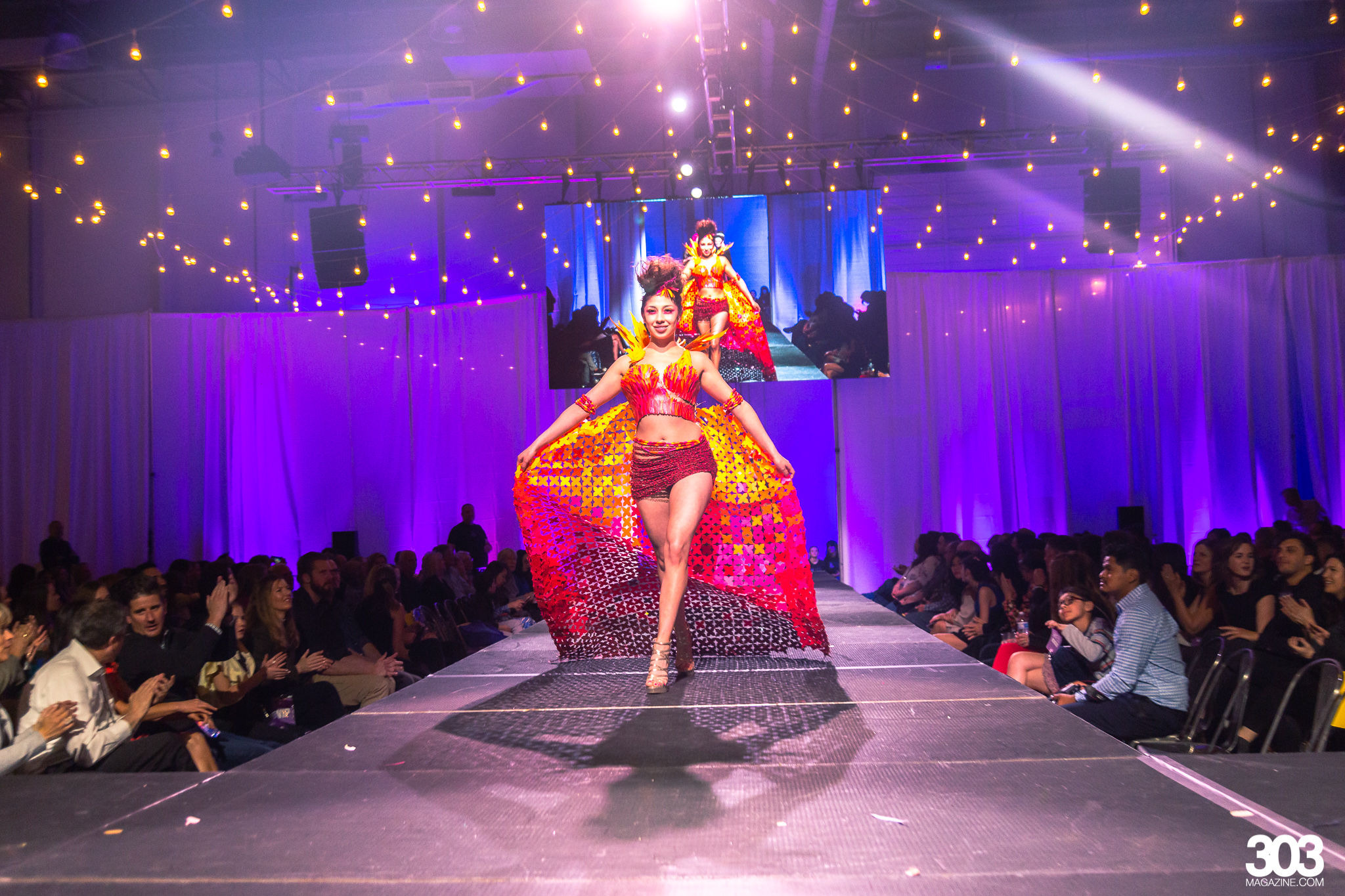 “Up In Flames” by Veronica Dewey Design. 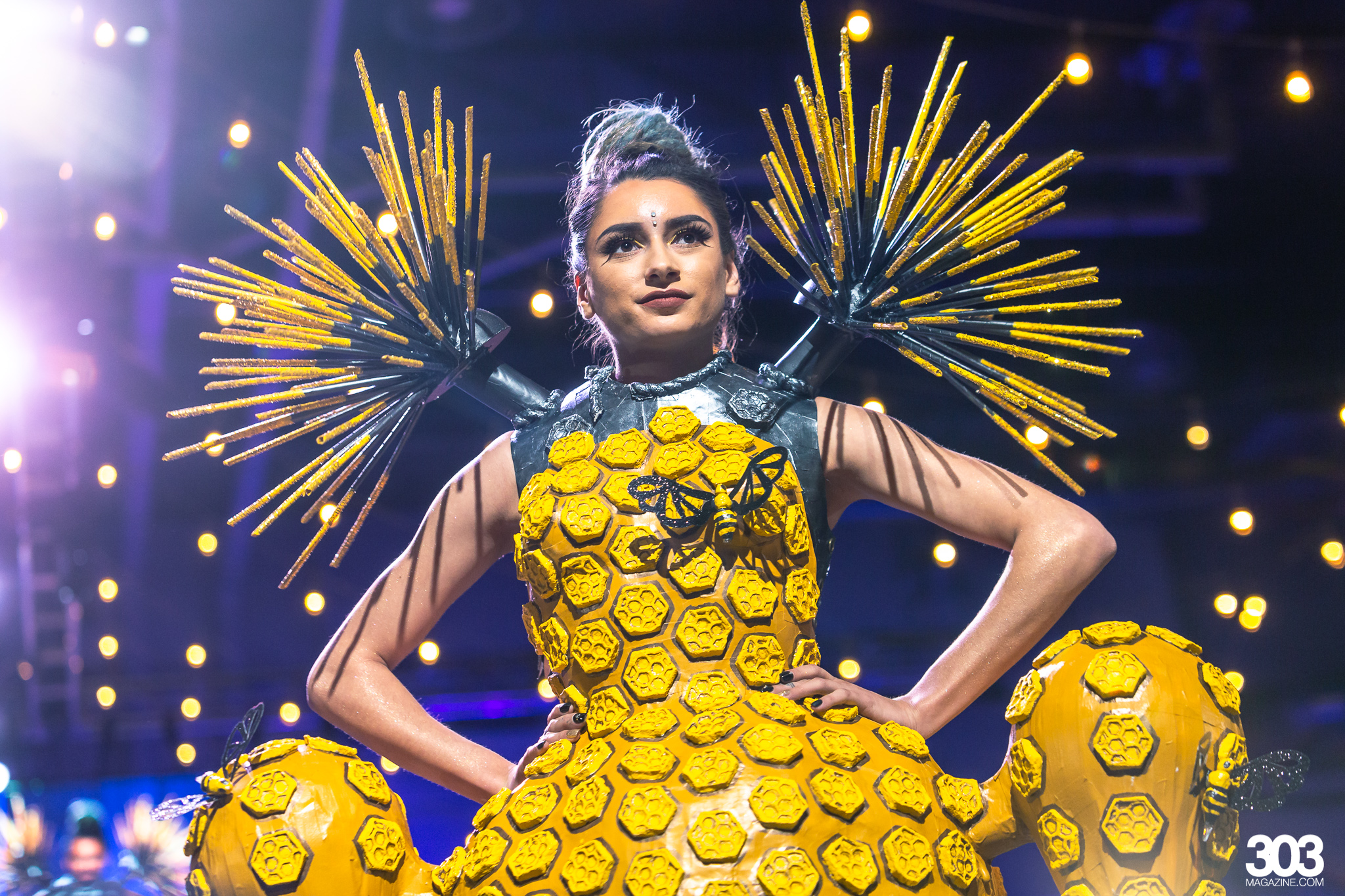 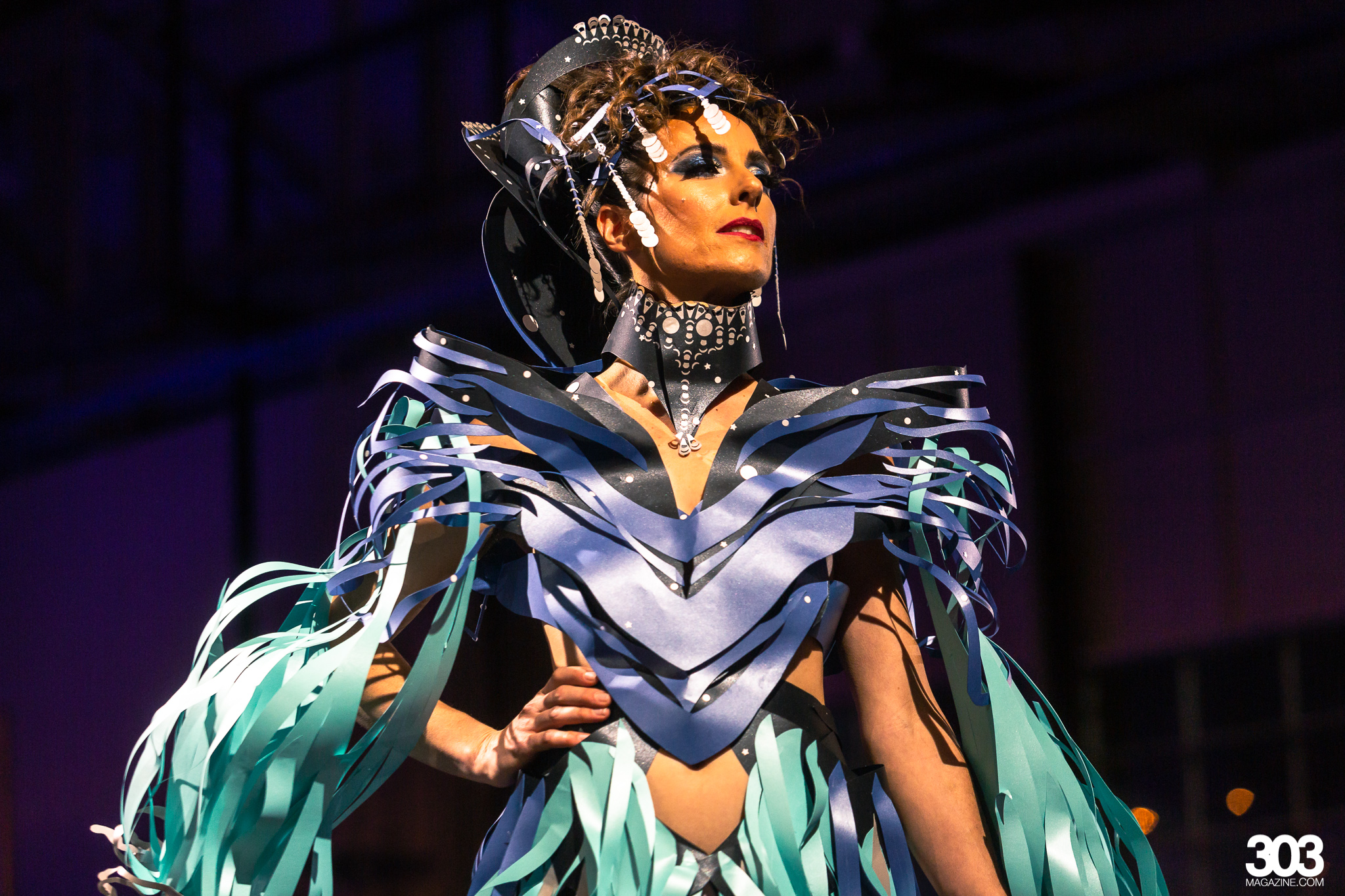 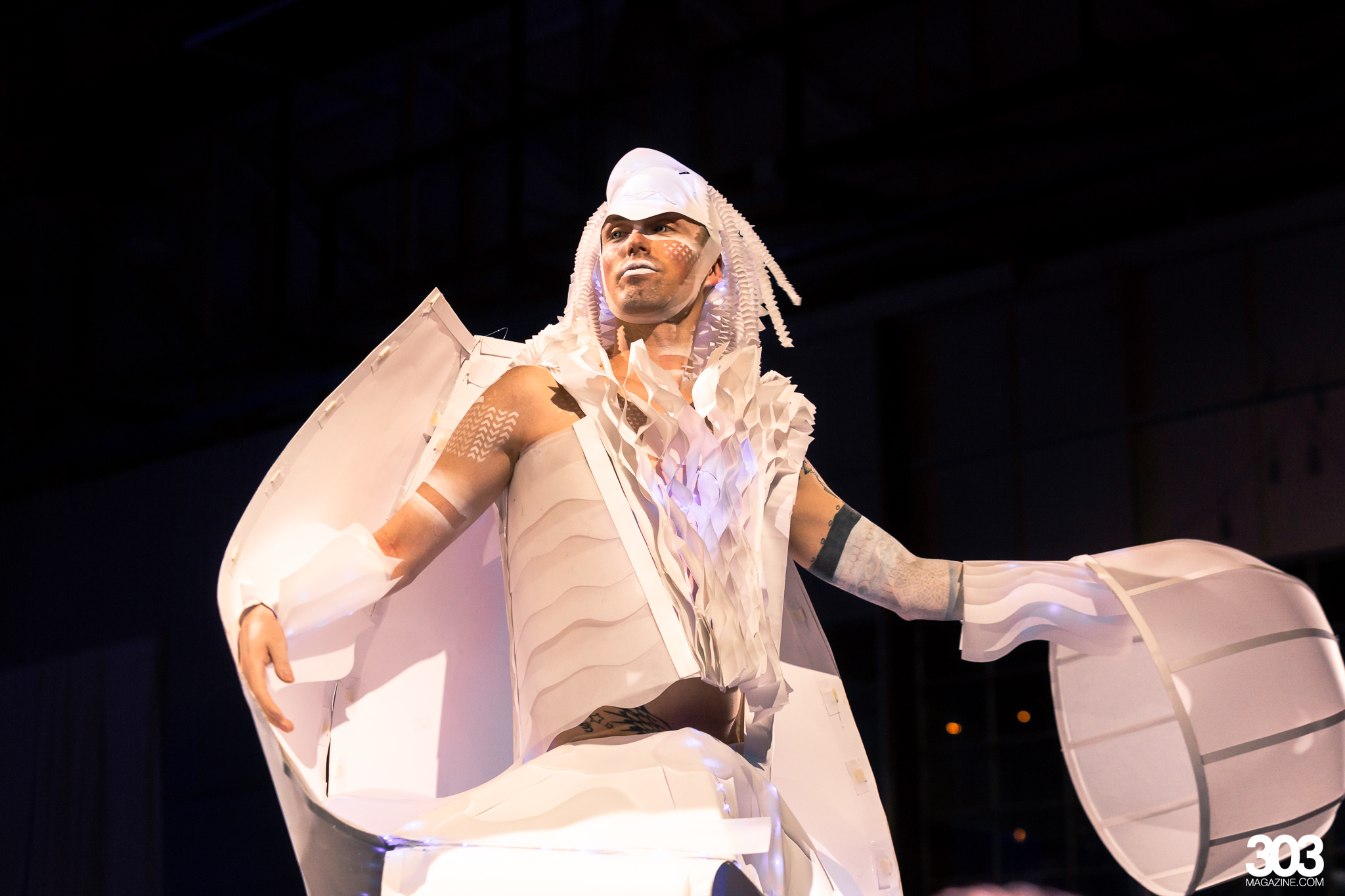 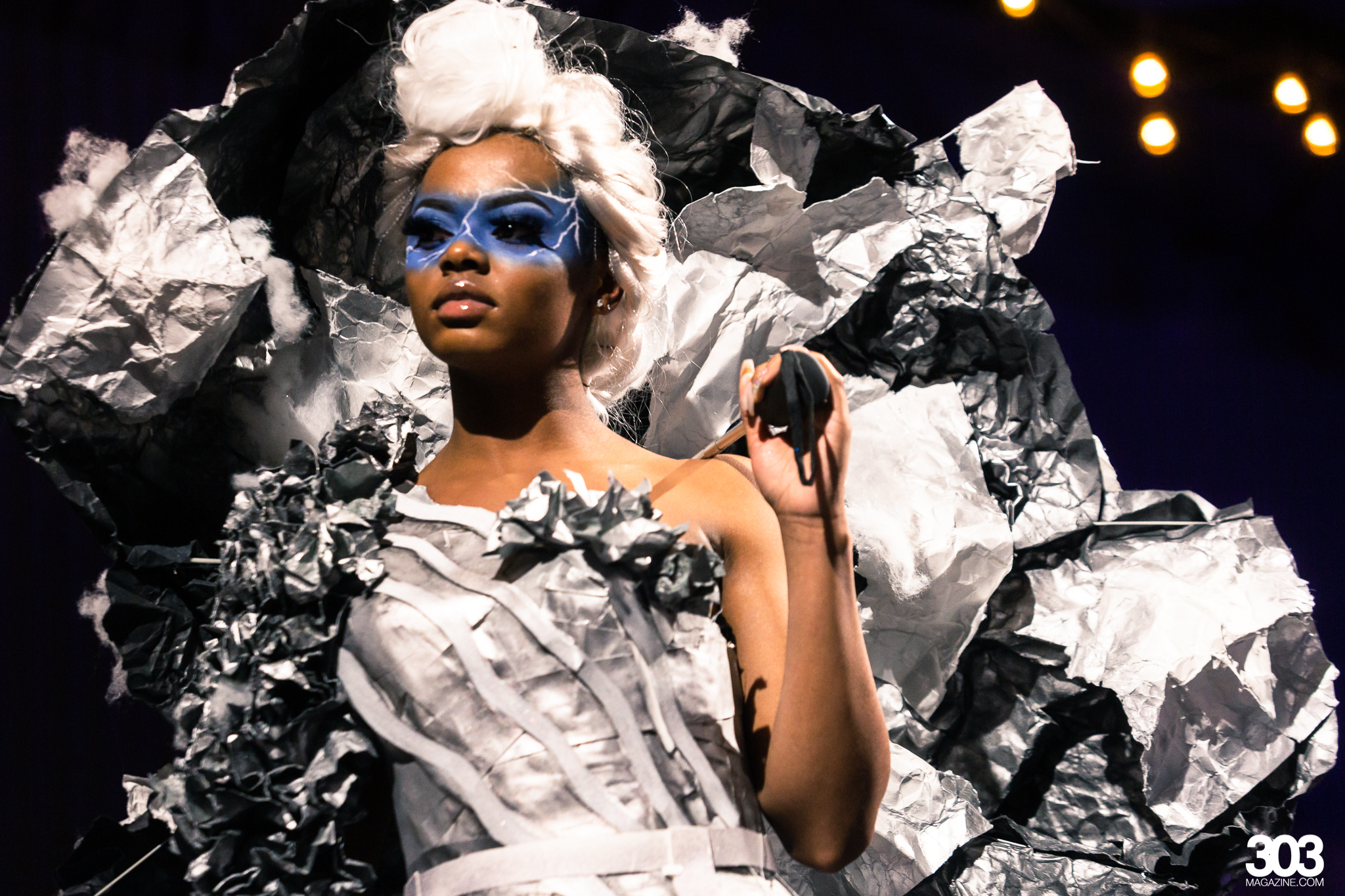