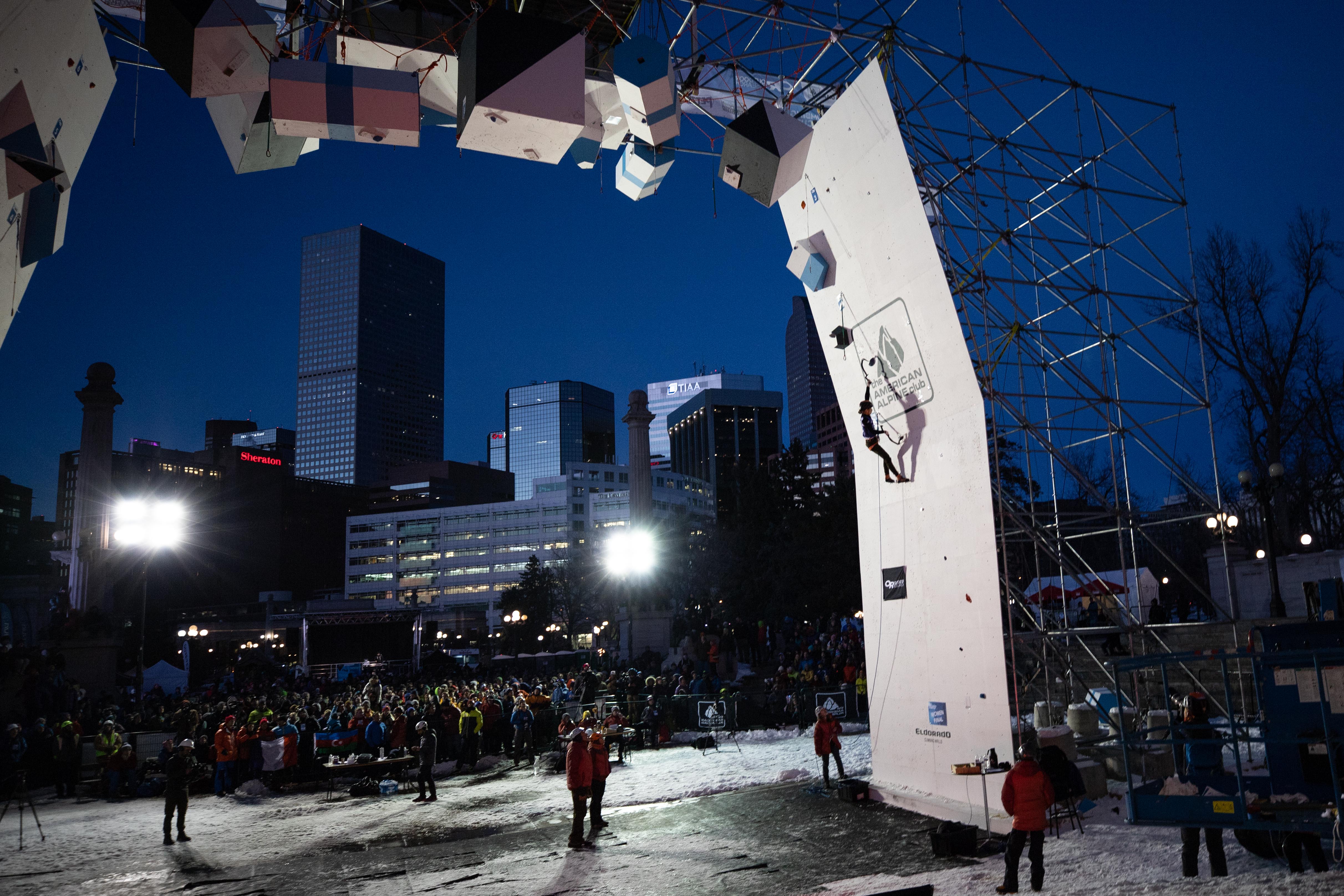 Most impressively in the context of downtown Denver, a wall of sheer ice and steel was created for the event. The wall, made on site with giant “ice cube trays” and kept frozen with a chilling system, allowed for two climbers at a time to race up 60 feet for the speed climbing competitions.

Next to the wall was a climbing area for the lead climbing competitions. The climbing area featured two side walls, one for women, one for men, with tiny holds for climbers to spider up. Then, climbers made their way through an obstacle course of swinging features. Climbers hung upside down, leaping through the obstacles. Some were able to make it all the way to the top to a place called “the rhino horn.”

Of course, the main attraction was the climbing area. But, there were several other aspects of the setup to keep spectators entertained during breaks in the competition and throughout the event.

Ice and winter-themed games were set up throughout the park. There was axe throwing, human curling, a snowball slingshot and even an ice maze. There were also a plethora of local food trucks serving up steaming dishes throughout the cold and windy weekend. 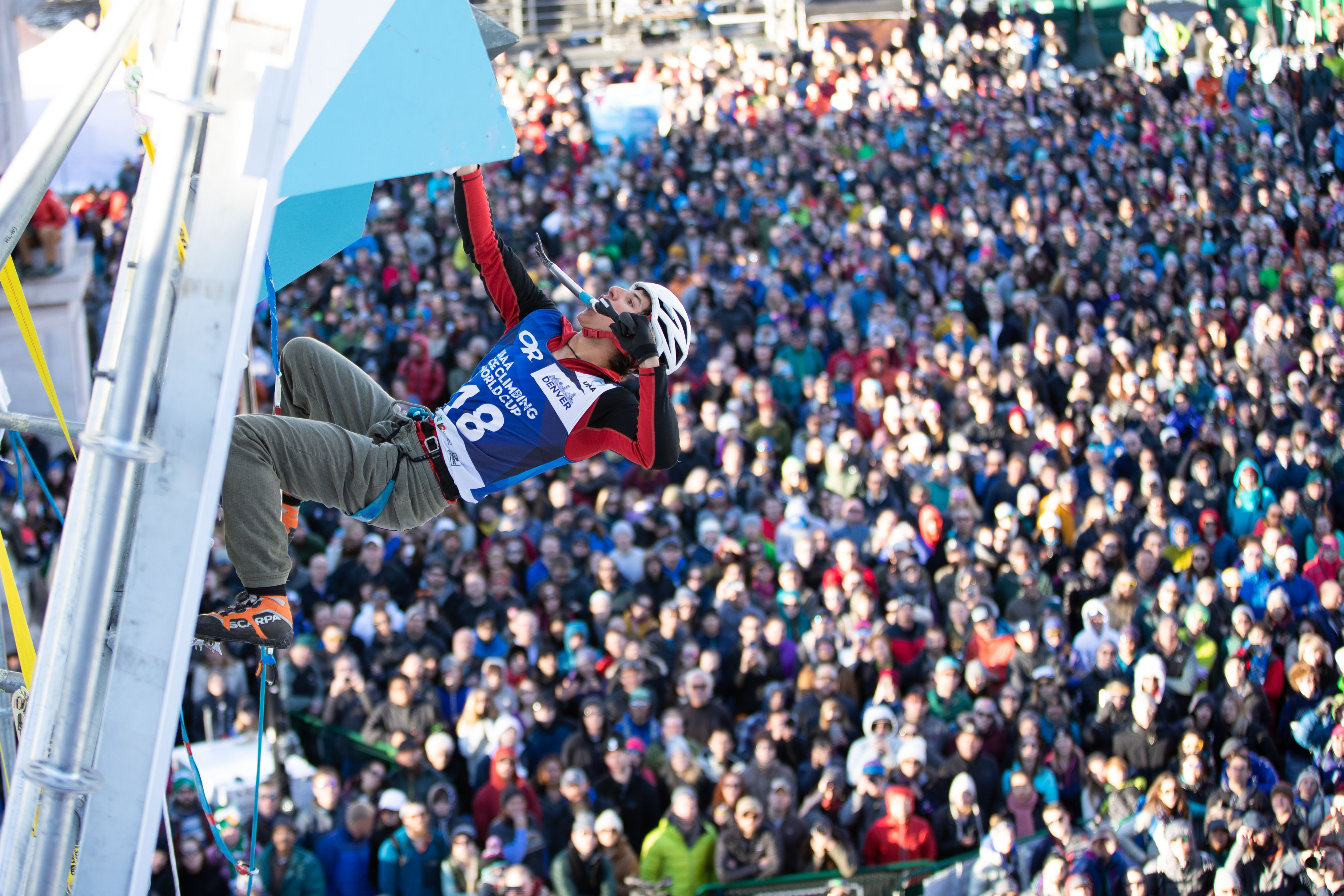 Yannick Glatthard of Switzerland puts on a thrilling performance in the Men’s Lead Climbing Finals.

On Saturday, qualifications for both lead climbing and speed climbing determined the contenders for both nights. The speed climbing finals featured three rounds — the quarterfinal, semi-final and final rounds. During this event, finalists sped up the wall as fast as they could — without falling. Using ice tools and crampons to make their way up the wall, this event was an all-out sprint. Some climbers fell, costing them time, while others were able to manage scaling the wall without a slip.

The competition was organized with two climbers side-by-side, going against each other. There were a total of eight total groups of duos — four men’s groups and four women’s groups, for the quarterfinals. Those who qualified in each round raced again on the other wall. Climbers were judged solely for speed and total times were given by combining their times from both walls.

Speakers announced that history was made when David Bouffard of Canada became the first North American to ever qualify for the quarterfinals.

When Sunday evening rolled around, climbers in the lead climbing finals balanced speed and agility — aka the ability to not fall — to climb as far as they could before time ran out. There were eight finalists for both the men’s and women’s groups, with each climber given eight minutes to make their way through the course.

Climbers precariously placed their ice tools on holds, jamming their crampons into the wall and obstacles as they climbed. They wore golf gloves to keep their grip on the ice tools. Once they worked their way up the wall, they jumped into the obstacles. In the men’s case, an actual jump was required to make it to the first feature. From there, climbers tangled their legs over arms to keep close to the features, making quick moves to the next dangling obstacle. Only some were able to make it past the hanging features and onto the solid overhang, and fewer still made it to “the rhino horn” to top out. Climbers were ranked based on points earned from how many holds they touched and amount of places they were able to clip their ropes into, but finishing to the horn and clipping in before time ran out was the goal.

The first man to top out was Yanick Glatthard from Switzerland, who raced through the course, making several exciting leaps to new features before grabbing the horn with only seconds to spare. Nikolai Kuzovlev of Russia, the winner of Saturday’s men’s speed finals, showed his versatility with another incredible performance. Kuzovlev was able to reach the horn and finish with 25.78 seconds left on the clock, claiming victory with a total of 480 points.

As for the women, Eimir McSwiggan of Ireland was the first woman to make it past the hanging obstacles and onto the solid overhang before time ran out. Woonseon Shin of South Korea was the first woman to reach the horn, but unfortunately timed out seconds before she was able to make her final move. One of the more dramatic moments of the event was when Maria Tolokonina of Russia, winner of the speed climbers, raced her way up. About to make her final move onto the horn, she leapt for the hold catching it with her ice tool, but fell with the leap — tool still in-tact with the horn. Yet, she still won the competition as she made it to the horn without timing out, achieving 500 total points and putting Shin in second place with 420 points. 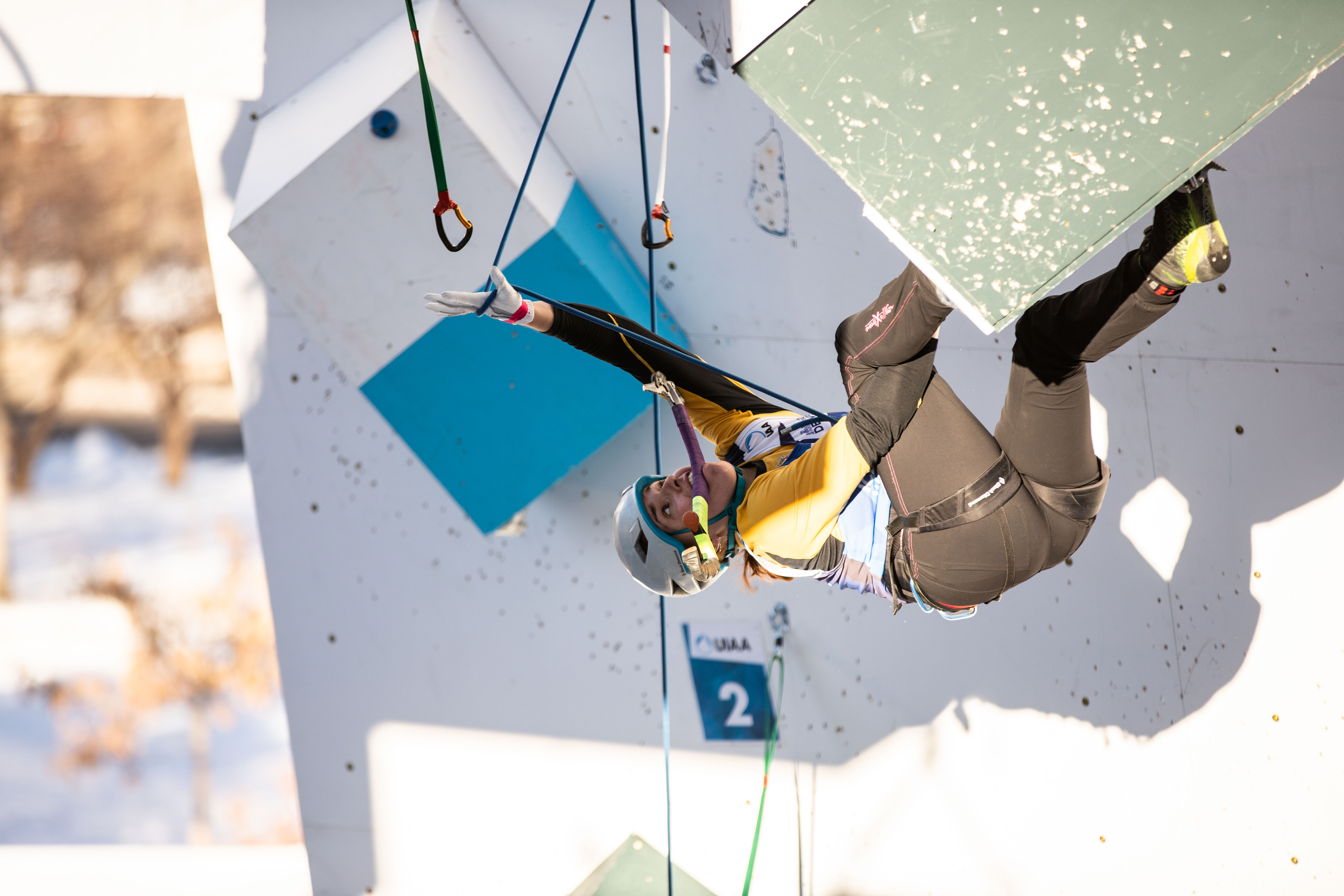 Female climber grabs for a clip during the Lead Climbing Competition.

These fearless climbers showed superhuman strength and agility to a crowd of Denverites who may or may not have ever seen a climbing competition. However, one thing was unanimous — no one had ever seen an ice climbing event to this level of competition in the US before, leaving everyone in awe of the incredible athletes that came to Denver this weekend.