Review – Peter Murphy Gets Vampiric At The Oriental Theater

The line of people waiting for doors to open wrapped around the Oriental Theater — showcasing the aesthetic influences of the “Godfather of Goth’s” reach as most people, dressed in black, peered anxiously at their phones or watches. The mood was everything but somber. There was an electric energy in the wait, and talk of Bauhaus cut through the cold and fog that had accumulated almost as a way of inviting the night into existence.

Bauhaus hasn’t been a full band since 2008 when they released their final studio album to date titled Go Away White. The contention between members led them to disband and pick up solo projects outside of the Bauhaus name. The concerts on Monday and Tuesday night were the closest the band has come to working in fruition since their official break-up — with bassist David J and frontman Peter Murphy touring together to celebrate 40 years of Bauhaus history. The two goth champions went through their first studio album In The Flat Field with other intrinsic Bauhaus hits sprinkled through the set as well. 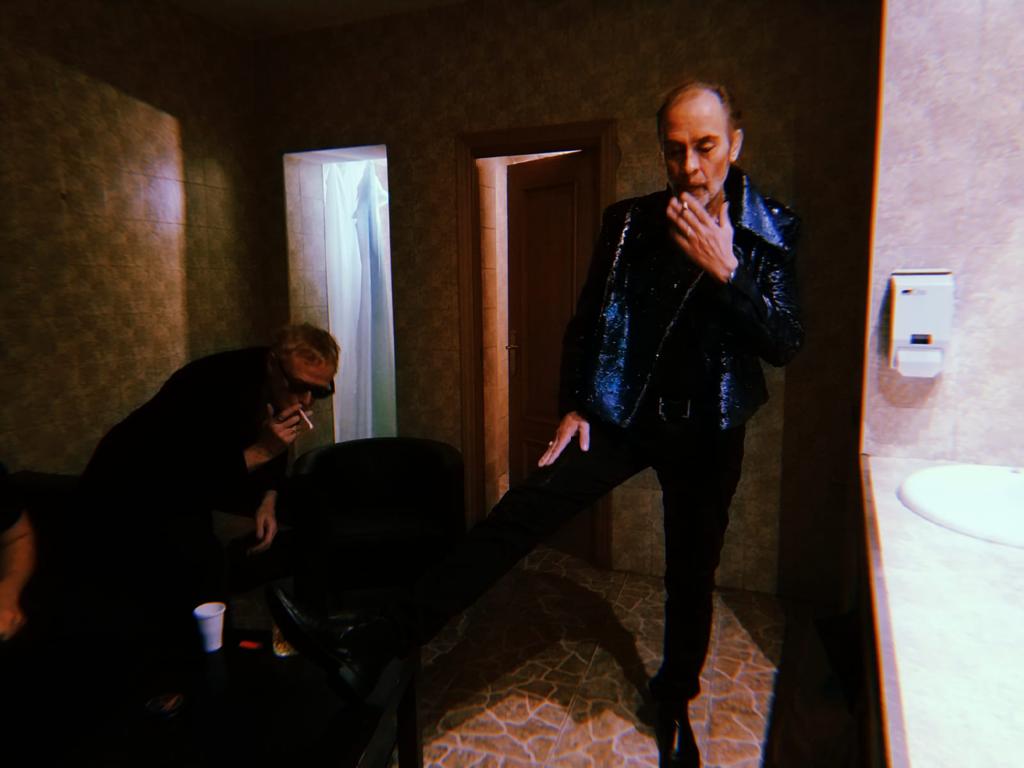 Monday night started promptly at 8 p.m. with Vinsantos — who called themselves “the queer witch of New Orleans” — walking through the crowd to the stage. Their humor and outfits were a perfect compliment to the venue and their musicianship was exactly what the night needed. Through dark lyricism, Vinsantos spun a web of musicality, sweeping through dramatic arpeggios on the piano. After a “non-consensual encore” — where Vinsantos directed the crowd beforehand to clap loudly enough to get them back on stage — the night went quiet as Desert Mountain Tribe (a three-piece band from England) took the spotlight. The band started going through their motions and quickly picked up speed and energy akin more to the Colorado jam scene than a goth show. Although this was the case, the audience embraced the change. Desert Mountain Tribe is an accomplished band with a drummer who was dripping sweat at the end of their set due to the complexity of the rhythmic patterns.

A bit before 10 p.m., the former members of Bauhaus and guitarist Mark Thwaite and drummer Marc Slutsky made it to the stage. Murphy is still a sight to behold, with his striking blue eyes and high cheekbones, he evokes all of the undertones of the goth culture he is so well known for. David J adorned dark sunglasses and a popped collar and stood directly left of Murphy. The night began with “Double Dare,” with In The Flat Field album art projecting behind the band as the drummer picked up tempo and Thwaite ripped through the distorted guitar chords. There was barely pause between songs as the four-piece explored song after song to uproars of applause. “The Spy In The Cab” was an entertaining performance with David J staring straight ahead at the audience while holding and repeating a bass note that came out mimicking a heart rate monitor. Murphy would jaunt around the stage with a bedazzled jacket in tow, looking down at the audience with a mixture of disdain and curiosity. His vocals never faltered and his theatrics managed to overcome the test of time. During “Stigmata Martyr,” Murphy used the microphone stand to suspend himself as if crucified while the band ripped through the instrumentals of the song.

The In The Flat Field setlist ended with “Nerves” but the band was far from done. They paid tribute to some of Bauhaus’s most loved songs including, but not limited to, “Bela Lugosi’s Dead.” There was a quick outfit change for Murphy as he donned a darker coat for the classic hit and a single spotlight shined on him during the opening verse. The shadows of each performer reflected on a now blank background, making every movement look augmented and distorted, a technical feat reflective of the ambiance. Murphy loomed over the audience, his eyes somehow more distinct and demonizing than before. He popped his cape-like collar a la Dracula and zeroed in on the crowd quite literally like Bela Lugosi would have done in one of his renditions of the famous vampire. The moment shifted as he moved on to other classic songs but the fear dwindled — a fear that was half of the appeal of the show to begin with.

Bauhaus was an important part of music history and Murphy and David J managed to evoke the genre they inspired with ease —despite the new age of music they live in. The darkness of the genre lives in a misunderstood place within most peoples hearts, resorting to stereotyping the music with the morality of the people who enjoy it. Goth and all that embodies it often is just a channel of self-expression that doesn’t require status quo affirmation. It’s a catharsis for the norms of day to day life. The proof is in the actual emotion evoked in these shows — and Murphy is the definitive homage to the genre as a whole. As he maneuvered through songs of angst and misunderstanding with his sallow intensity, he still managed to catch the eye of a small boy front row and pantomimed to the parents mid-song to make sure the kid had earplugs. Maybe not what you’d expect from the dark realms of goth, but definitely a reflection of what the genre is really all about.